AI Sequencer is a system to simplify and reduce the level logic needed to manually control AI characters by level designers, and it works on top of the current Flow Graph system interface.

An AI Sequence is a chain of actions to be performed by the AI entities. The and AISequence:End define the beginning and the end of the sequence, while the AI sequence action nodes, like AISequence:Move or AISequence:Animation define the order of the actions to be executed. Only one sequence can be active for an individual agent and it can only perform one action at a time.

They can be looped as well, like in this example which will make the agent continuously move between tag points 10 and 3: 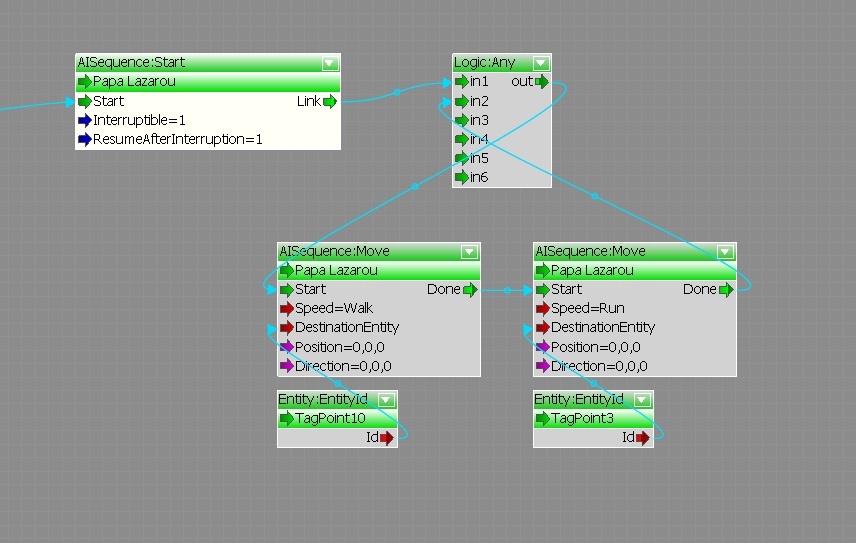 Sequences can also have conjoined sync points. In this example, both agents will start by doing a move action and will only continue to the next action when both have arrived at their first destinations:

With the interruptible flag set to true, the AI sequence will automatically stop executing as soon as any AI entity leaves the idle state, taking care of stopping any action that could be active or triggered after that.

If it is also set to resume after interruption, the sequence will also be resumed when the AI goes back to the idle state. It will resume from the start or from the latest bookmark. Bookmarks are defined with the AISequence:Bookmark flownode and can be placed in the middle of a sequence and will basically work as checkpoints from where the sequence should resume from.

To minimize possible bugs and unexpected behavior, only flownodes supported by the AI Sequence system can be used to define an AI sequence chain and there will be an error message when the AI sequence is triggered if an unsupported node is used.

The currently supported nodes are:

If necessary, other flownodes can be added to this list as long as they are compatible or changed to be compatible with the AI Sequence system.