Since CRYENGINE 3.8 this document has been superseded by Attachment System Tutorial - Character Tool.

The character pipeline uses a character attachment system which allows to attach separate static objects to joints or directly to polygonal faces of a mesh and update them together with the animated character.

These are autonomous object that that can be replace or detached at run-time by the game-code and fall to the ground under gravity. It's also possible to use skin-attachments to replace entire body parts such as heads, hands, or upper and lower body.

Bone-attachments are attached to a joint. The location can be ‘relative’ to a selected joint or they can be perfectly aligned with the selected joint if you click the checkbox "Align Bone Attachment".

Face-attachments allow faster prototyping. For bone attachments you need bone in the model and adding these bones is complex, time consuming and only tech-artists with Maya/Max installed can do it. Face attachments are easier to use for fast experimental setups and everyone can do it in CharEdit.

There are several special-case names for attachments which define whether they appear in 1p or 3p. These are listed inside Player.cpp under SetupPlayerCharacterVisibility.
As an example, the reason the players head doesn't render in 1p is because it's called "head" in the character CDF, and "head" is defined as a ppThirdPersonPart in this file.

If you want to attach something to a character, the first step is to create an "empty" attachment-socket. A ‘socket’ is an attachment slot without anything in it. Empty sockets can also be used by the game-code to plugin (and process) typical game-objects like CEntityAttachment, CLightAttachment or CEffectAttachment. In such a case we use the attachment-system to actually update game-code. In the attachment window you can create a new attachment-socket, by selecting the type of attachment (Bone, Face or Skin).

Object selection for the socket.

Material selection of the assigned object. The name of the material assigned to the object is shown here, with a button to browse and attach a different object “…” to the right. Dflt assigns a default material.

Deletes the assigned model from the attachment-socket. It doesn’t delete the socket itself.

Hides the currently selected attachment. This feature can be set by default and saved in the file, but usually it’s a run-time feature.

The attachment system in SDK3.5.5 supports simulated movements of bone- and face-attachments. This type of animation is always a reaction to previous (primary) motion, that's why they are called secondary animations. This feature is an extension of an already existing system.

To approximate the physical movement of objects on characters we use the properties of springs and pendula:

A) Add Simulation to the Socket

The socket is created as explained in part1 "Setup of attachment-sockets". Then you have to plugin a CGF into the socket.

The type, size and shape of the CGF (sword-sheath, pistol, dagger) will have no impact on the simulation, but it determines which setup you choose, because we can only mimic the behavior of a real physics object.

To add a dynamic simulation just open the RollupBar under "Simulate Socket" and select either PA_Cone, PA_Hinge, PA_HalfCone or SA_Ellipsoid. The first three are proxies to constraint the movements of a pendulum.

The last one (ellipsoid) constraints the movement of a spring. The ellipsoid is a sphere that you can mold like clay into an non-uniform ellipsoid, a half-sphere, a plane or a single line.

Now you have a physicalized socket which reacts to the movements of the character. You can visualize it with "Draw Setup". 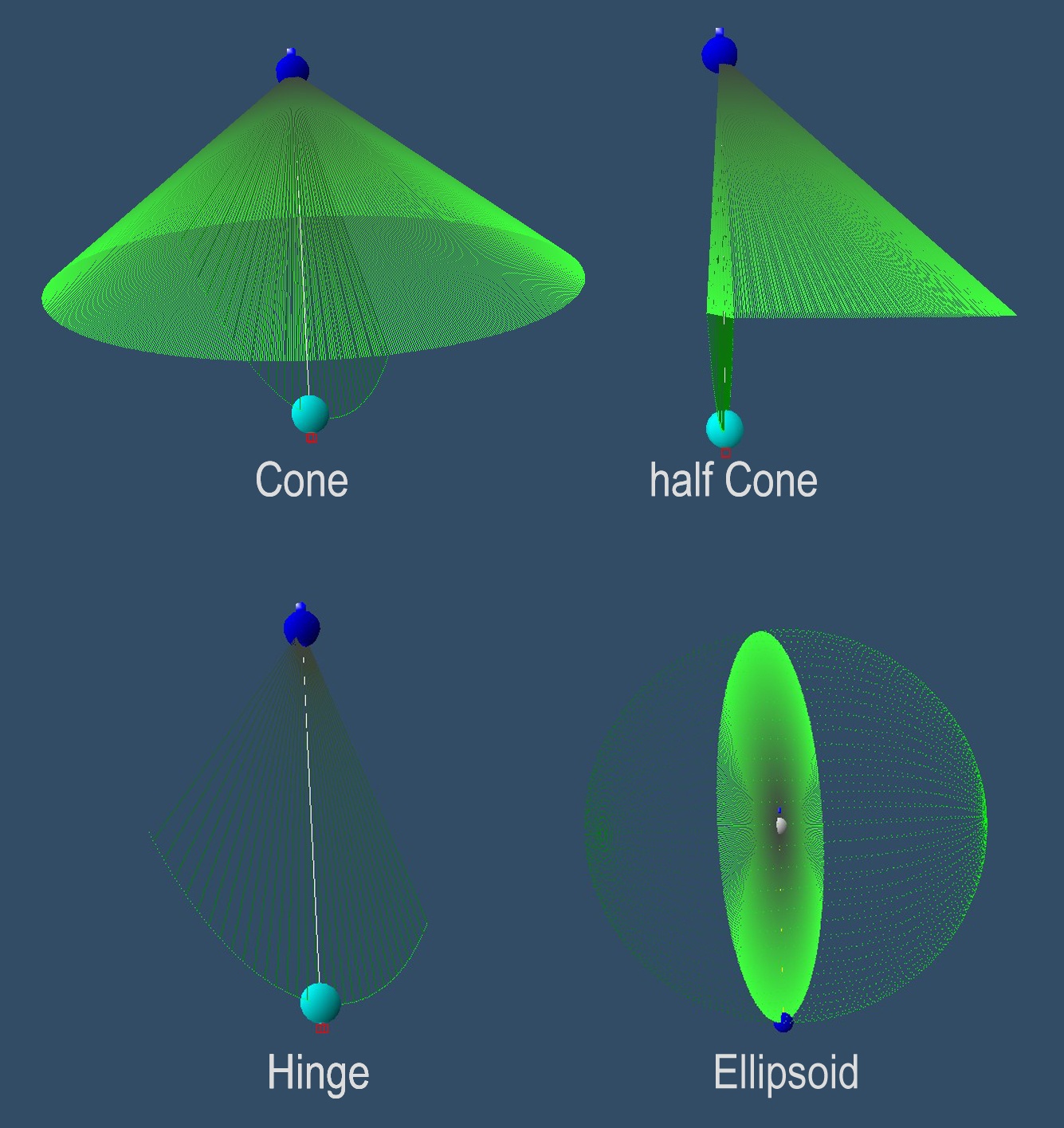 Once you have the basic-setup, you can play around with the physics parameters (mass, gravity, dampening, stiffness). You can edit all these parameters while the character animations are playing and see the effects immediately.

To tweak the dynamics it is assumed that the user has a basic understanding of these parameters and their relationship.

Attach a static object with a collision triangle to an empty socket. 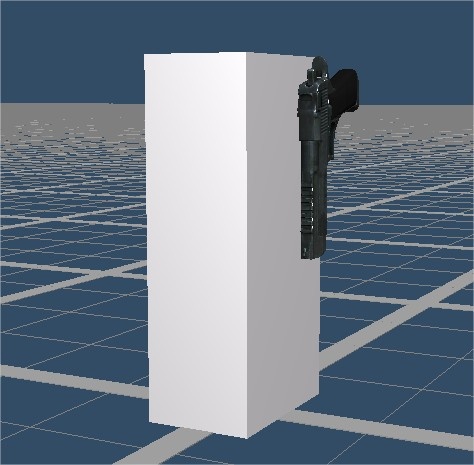 Load the exported or downloaded LegGun.chr file and start adding a new empty socket. There we will attach a gun this time to simulate a “thigh” with a attached gun.

The issue here is that the cone for example could penetrate through the leg and the simulation would not look right without collision.

For that we are able to assign to each socket 3 bones which are connected and build a collision plane (example for really long hair would be to add to each shoulder bones a “triangle bone” and one on the pelvis).

This feature needs to be added to the cdf file in a text editor we simple add a line which defines the bones for the collision triangle.

Let’s open the Objects\Attachment_exampleFiles\Bone_attachment_triangleCollision\leggun.cdf file in a text editor.

The collision triangle will be created counterclockwise, that is why we start in the leggun.cdf with the bone triangle3 – triangle1. 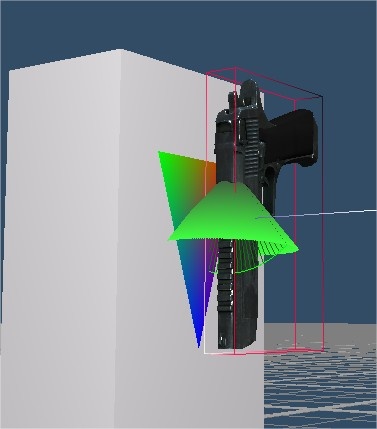 The setup works only if you see a colored triangle in the area of the 3 bones. To test the asset you can simple drag in the cdf as a geomEntity in the level and move it with the gizmo around.

One more interactive example would be to replace the local player’s cdf. Download and replace the sdk_player.cdf with the existing one (or only in the .pak file) with GameSDK\Objects\characters\human\sdk_player\sdk_player.cdf.

B) Transfer the Socket Simulation to a Joint

In this case the simulated objects can be part of the character's mesh (rather than separated CGFs). The main motivation for this feature was the optimization of the render thread.

Because all simulated objects can be part of the mesh, we can add secondary animations without addition draw-calls. So if a model has 256 dangly objects, but all objects are part of the same mesh with the same material ID, then all of them will take only one single draw-call.

Reducing draw-calls is the most important thing if you want to optimize the render-thread. Because this is a very light-weight feature with only minimal impact on CPU, it will work perfectly on PS3 and X360.

To transfer the socket simulation onto a joint, first you need to create and physicalize the socket as explained in 2a).

In order to animate the joint directly (and everything that is skinned to that joint) you must leave the "object-field" empty and give the attachment-name the same name as the joint-name. Make sure that the attachment name is lower case.

You can use the "rename" functionality and click the “apply” button. With this simple trick we redirect the simulated animation to the joint and modify the whole character pose.

An update of a joint, is always a full update of the whole branch with all its children. This means we can use exactly the same system so simulate ropes: first we create a pendulum-simulator at the root of the chain, and then you add a new simulator for each link.

It is absolutely important that the rope-links have a child-parent relationship, or the simulation will not look correct.

Simple character setup with bones and a skinned geometry 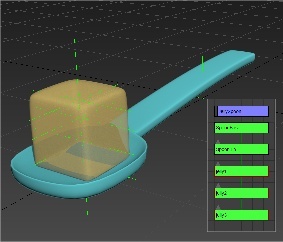 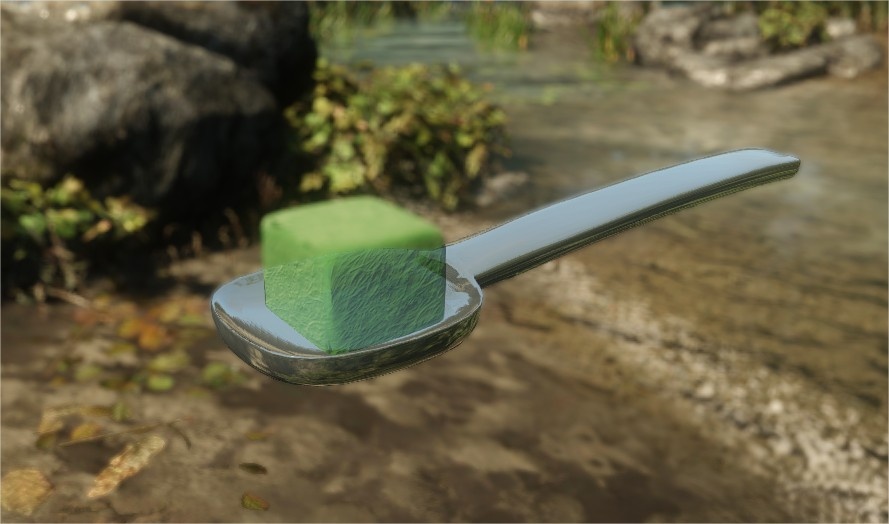 Load the exported or downloaded example file JellySpoon.chr in the character editor, add one bone attachment and rename it to jelly1 like the name of the bone which you want to influence.

From there make sure to align a SA_Ellipsoid to the attachment and adjust the shape and properties to get a nice spring effect to simulate the jelly.

In our example file we will simulate a metal chain a simple bone hierarchy with skinned geometry elements. The chain starts with the root and has 9 bones attached to it as a hierarchy each bone is linked to the next one.

The naming convention isn't important at this stage that is the beauty of this system it allows already existing and exported characters to be used for the simulation of their bones.

By default, the system uses the Y direction to simulate the pendulum therefore we have to make sure that the Y-axis is pointing in the direction of the simulation axis. But in the attachment panel you can set any axis as simulation axis. 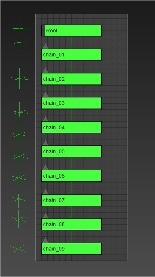 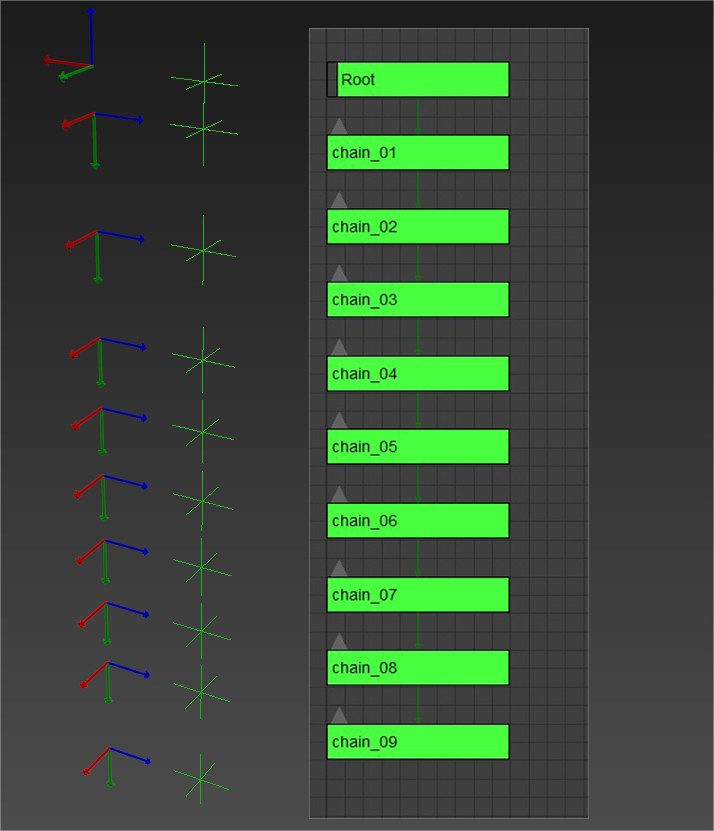 It is also really important to write all the names in lower-case otherwise the system won’t be able to recognize the bone. Apply the bone to the attachment by pressing the “Apply” button on the bottom of the attachment menu.

Next, you have to align the socket with simulated joint by clicking on the “Align with bone” button. Now we will enable the simulation by assigning a simulation primitive in the “simulate socket” menu.

Now you can play around with the physics parameters (mass, gravity, dampening, stiffness). You can edit all those parameters while the animations are playing and see the effects immediately.

You can also load your created .cdf into the forest level by dragging in the chr file as a geomEntity. The immediate update will only happen in the character editor but you are able to save the new changes to your .cdf and reload the scripts in the level to see it updating in the level.

Hinged character attachments use a fairly simple dedicated code (directly in the animation system) that can only handle one-hinge attachments with joint limits (they don't even handle collisions with the character or with other attachments).

To turn on dangling for a particular attachment, one has to specify 2 planes that form the edge used as a hinge. Planes are specified in the attachment's coordinate space. The first plane is the one the attachment "lies" on in its resting state, and the second is another plane it contacts with.

For the most typical attachment orientation, natural plane selection would be positive y, positive z (+y,+z). 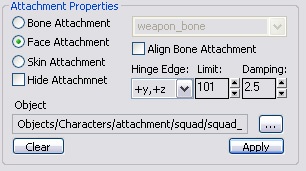 Default attachment orientation corresponds to joint angle 0. The maximum rotation angle is specified as the "limit" property. Use the "damping" property to prevent the "pendulum effect" (values up to 10 are reasonable, but can go even higher when needed).

Note that the changes take effect only after you press Apply button.

How the planes are defined

In the example above, the +y and +z planes were chosen. The hinge axis is created between them. 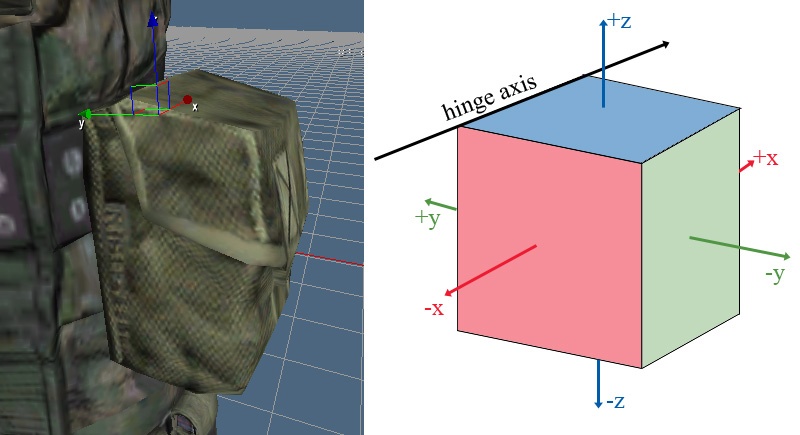