Dynamic Response System (DRS) introduces a new way to implement dialogues in a game. In the previous dialog system, content integrators could start specific dialogues at specific locations in the game. This made it hard for the narrative designers to add a new dialog or change the existing ones as they always required the intervention of a content integrator. Generally, old dialog system caused unintended results to occur; contrary to the DRS, it was not able to organize dialog lines well enough to prevent the possible problems like overlapping or unintended delays. A content integrator had to create multiple logic flows and different systems to ensure that dialog started or stopped at the right time. This included situations like checking if the person is already speaking a more important line, if the person is alive or if the line was already played before. This workflow made an already complicated system more complex by having the content integrator to deal with multiple dialog logic flows.

The DRS on the other hand, follows a different workflow. It decouples the dialog-feedback relationship and the game logic. The System achieves this by adding an abstract layer between something is happening and a running dialog feedback. Therefore, the DRS simply splits the responsibilities between the content integrator and the narrative designer. This ensures that a content integrator is now only responsible for providing information about the state of the game-world and the events that are happening in it, while the narrative designer is responsible for converting those inputs into dialog outputs.

This approach, in comparison to the old system, requires the content integrator to no longer start dialog lines; they rather inform the DRS that an event has been initiated and that the event can be linked to a dialog. This might sound like an additional step to just get a dialog line to be played, but it has many positive effects, particularly when you have more than just trivial dialog scenarios. Also, all logic related to overlapping dialogues, timeouts for dialog lines, variations, which based on many things in the game world, are now dealt with centrally in the DRS and not in various different systems.

There are some central concepts used in the DRS that you should fully understand before using it.

Flow of a Game Event

The following example shows how the game event, player was shot by someone is converted into actual dialog output. The ??? block is the part where the DRS comes into play: 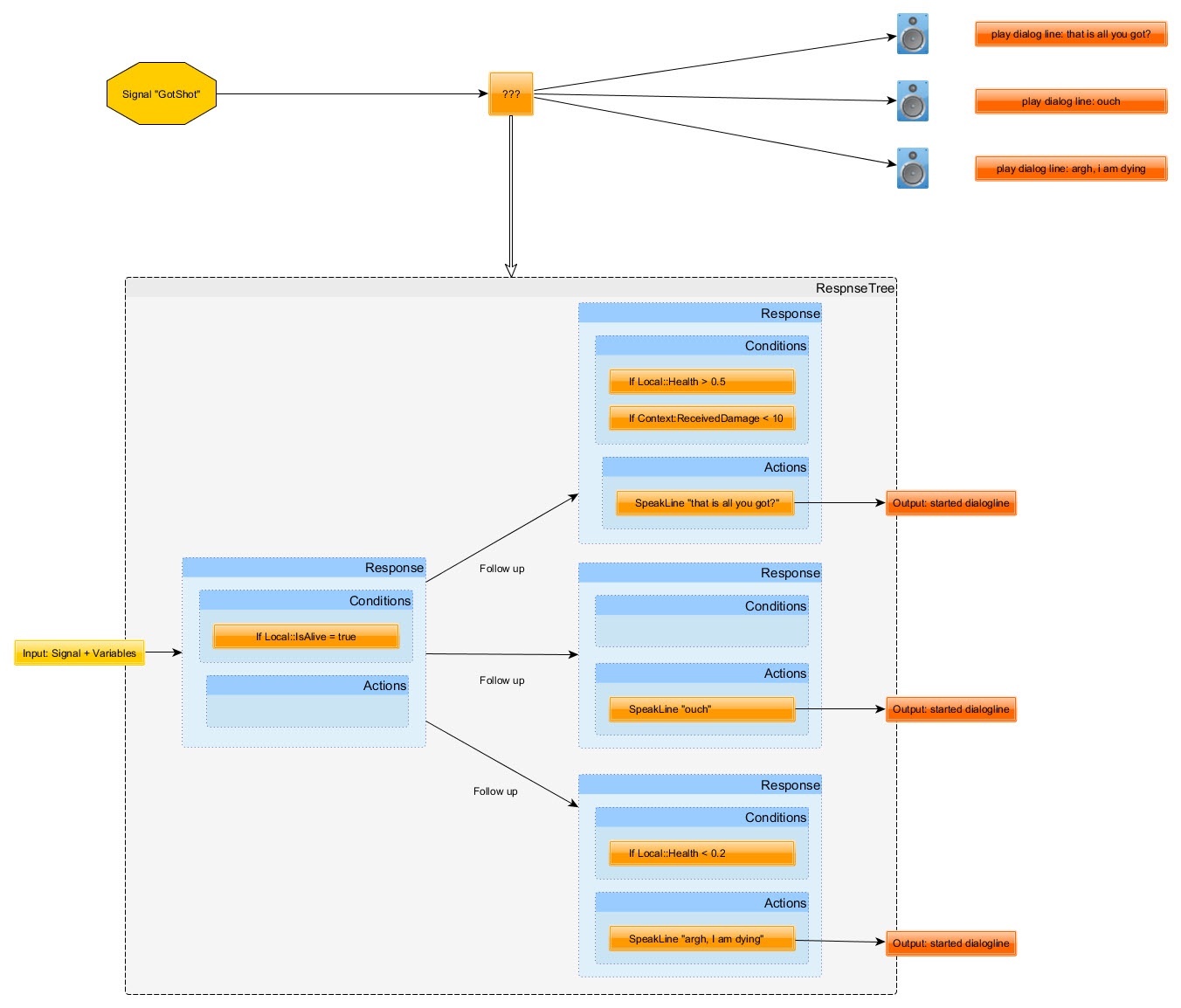 Flow diagram for a game event

The game logic can decide to always send a signal called sg_door_opened when the player opens a door. It's then up to the narrative designer as to what they do with this signal; they might just ignore it or they might add a response to the signal that starts a generic dialog such as "Look at me, I am opening a door."

The narrative designer can also decide that no dialog will be played when opening a door, but they may still create a response for the signal which, for example, just increments a variable that is created by themselves in the local variable collection of the door-opener-actor named opened_door_counter. They may then use this variable later on in the response, for instance to the signal sg_princess_freed, by having a specialized dialog-line such as "I had to open more than 70 doors to get to you, but boy it was worth it.”

This shows how narrative designers can create an interesting and more specialized, therefore better fitting dialog flow when they get enough input signals/variables to work with. If the sg_door_opened signal has a context variable containing the name of the opened door, then the narrative designer might also use this additional information to trigger another dialog for specific doors only.

The diagram below shows the flow of the same signal as above. This time though, in a vertical way and is based on the outcome of the conditions when different paths are chosen. 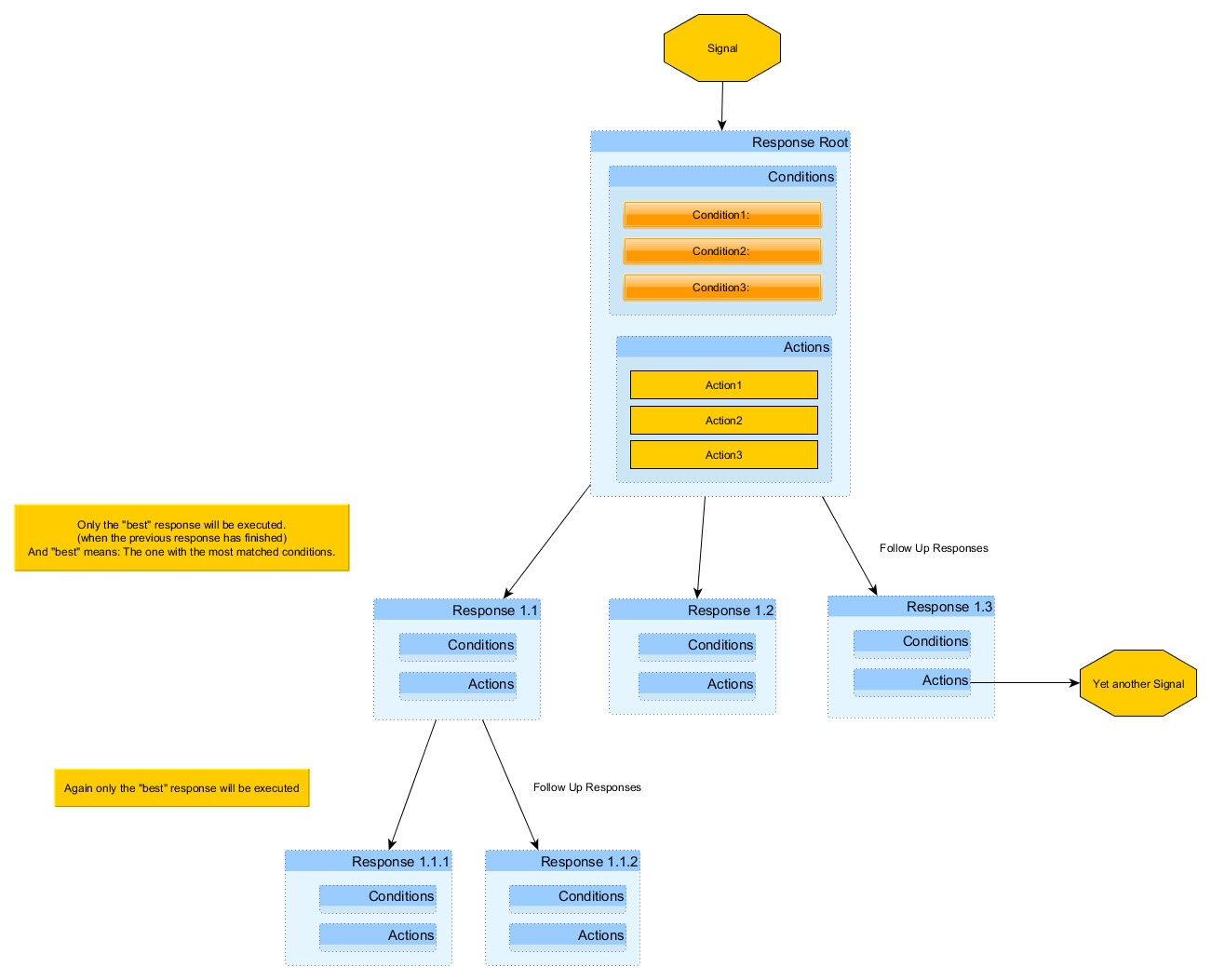 Flow signal in a vertical path

Based on the diagram above, it is possible to say that when the DRS receives a signal, it;

It is also worth mentioning that a response can send another signal by itself. This may start another response-tree in parallel and can be useful to split up response trees, reuse branches or to realize looping.

DRS knows what the best response is by simply assuming that the most specific response is the one that best fits the current situation. So the DRS will pick the response with the most conditions; which of course all need to be met, otherwise the response is not taken into consideration. This approach does make sense when for example you have to choose between the generic lines "There! An enemy" (a response with no conditions) or a very specific line such as "Oh no, an orc with a bow and just 15 seconds after we defeated this big Manticore!" (a response with many conditions). Clearly the second option here is the best fit for the situation. Each response can have any number of follow-up responses, but only one is executed; in other words, the one with the most matched conditions.