Attach/Detach an entity to another one. 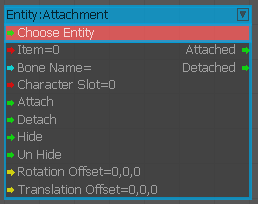 This node lets you attach entities to other entities without requiring the declaration of the attachment joint in a .cdf file. 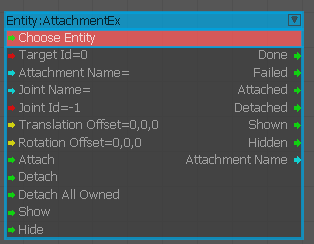 Used to beam objects instantly to any position in the level. When the Beam port is triggered the target entity is moved to the position input on the Position port.

Additionally, rotation and scale can be set using the input ports to match the beamed entity to another entity.

Used to send an event to one or more entities. The entities that will receive this event are specified by inputting a string to the name port. Each entity that has the string which is input there as a part of their name will receive the event set in the event port.

The events are case sensitive, so make sure you type it in correctly. 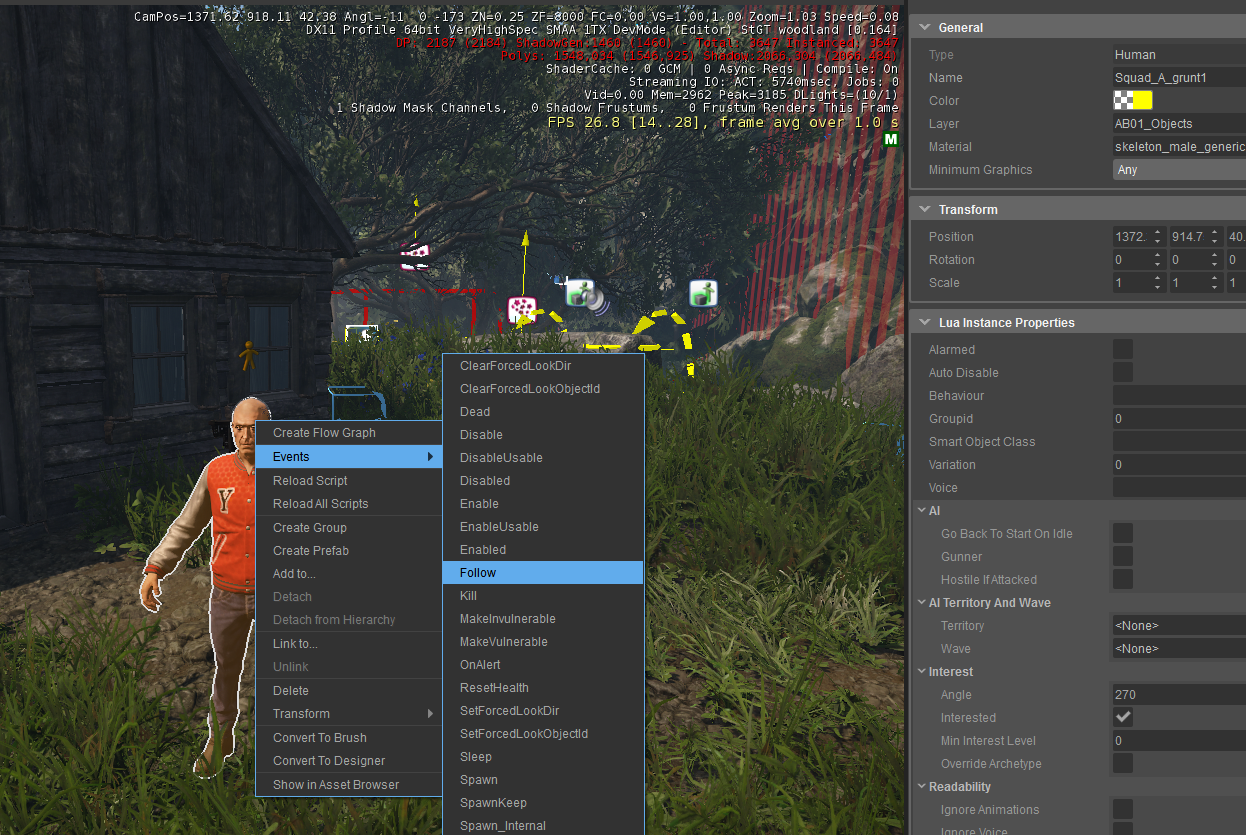 In this example after 5 seconds the Entity:BroadcastEvent node is used to send a Kill event to all entities which have the string 'Squad_A' in their name.

Allows changing a material on an attachment in a .cdf file. For example, you can change the material of the character's trousers.

Set Material is the trigger, ForcedMaterial is the full link to the material (eg: materials/references/basecolors/grey.mtl) and SubMtId is the number of the sub-material.

This node lets you easily switch a skin attachment and/or its current material and control its visibility. 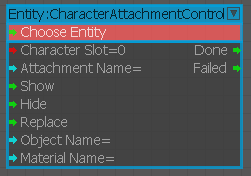 Checkdistancebetween the node entity and the entities defined in the inputs.

Check projection between the node's target entity forward direction (or the camera's view direction if not target entity selected) and the entities defined in the inputs. 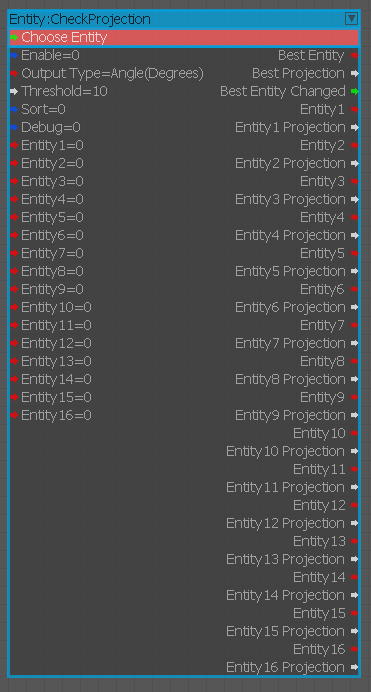 Used to detach entities from its parent entity. Usually the ChildAttach node has been used before to link the target entity to another entity.

The node has two additional ports to set transformation physics settings. When "KeepTransform" is set, the entity will keep its transformation in world space when detached. When "EnablePhysics" is set, physics will be re-enabled again when the entity is detached.

Damages specified entity by Damage amount when Trigger is activated.

Takes the positions of two entities and checks if they are in a certain range to each other. Depending on the result of the check the output ports are triggered. 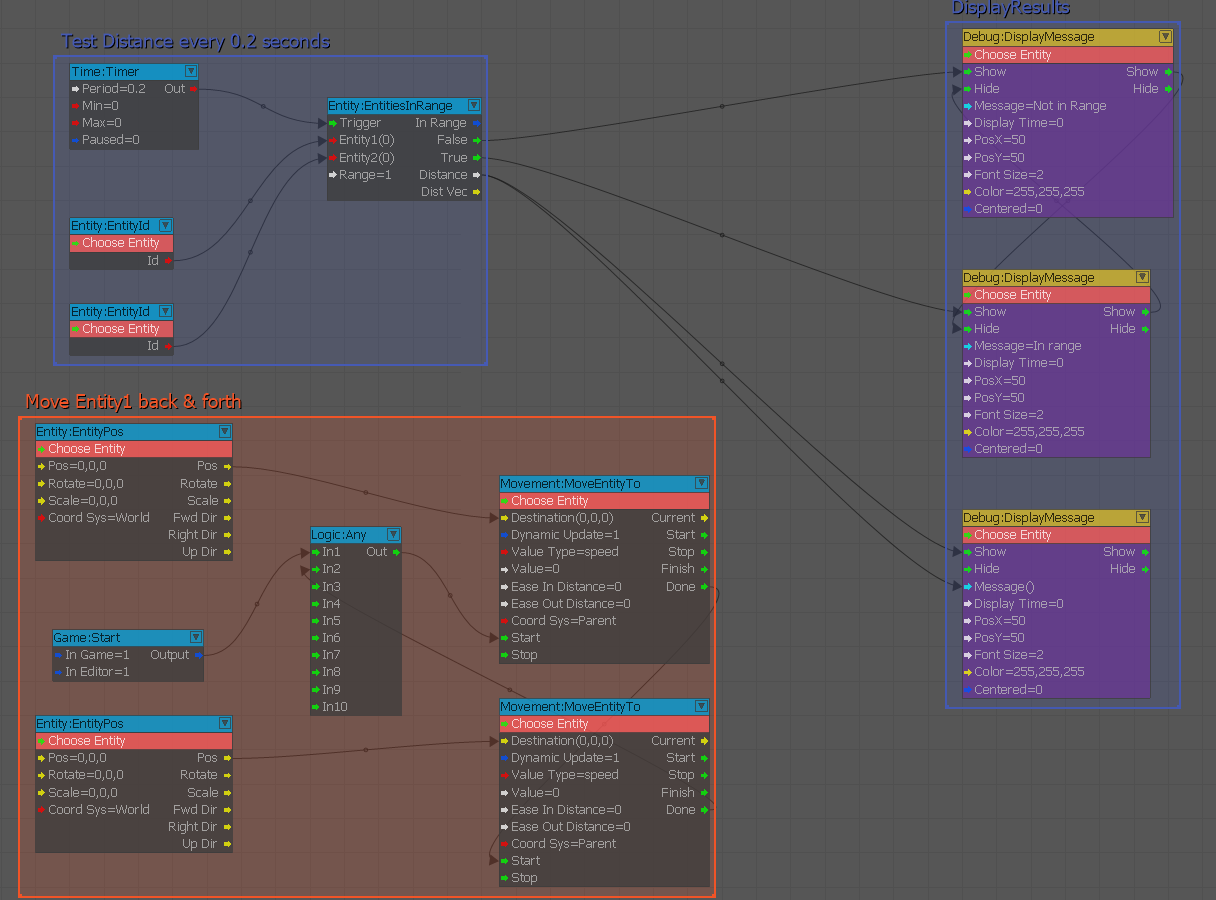 In the above example, we make entity1 move back and forth between two points. We have set up a timer to test the EntitiesInRange every 0.2 seconds.

Forces an entity to look at the specified target entity. 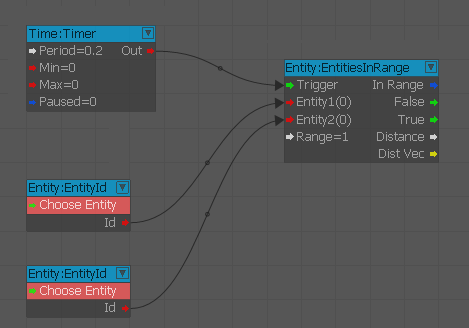 In the above example, the EntityIDs are used to define the targets of the inputs for the EntitiesInRange node.

When triggered, this node outputs the ID, name, class, and archetype of the target entity. In cases where entity types need to be compared, this node is very useful. 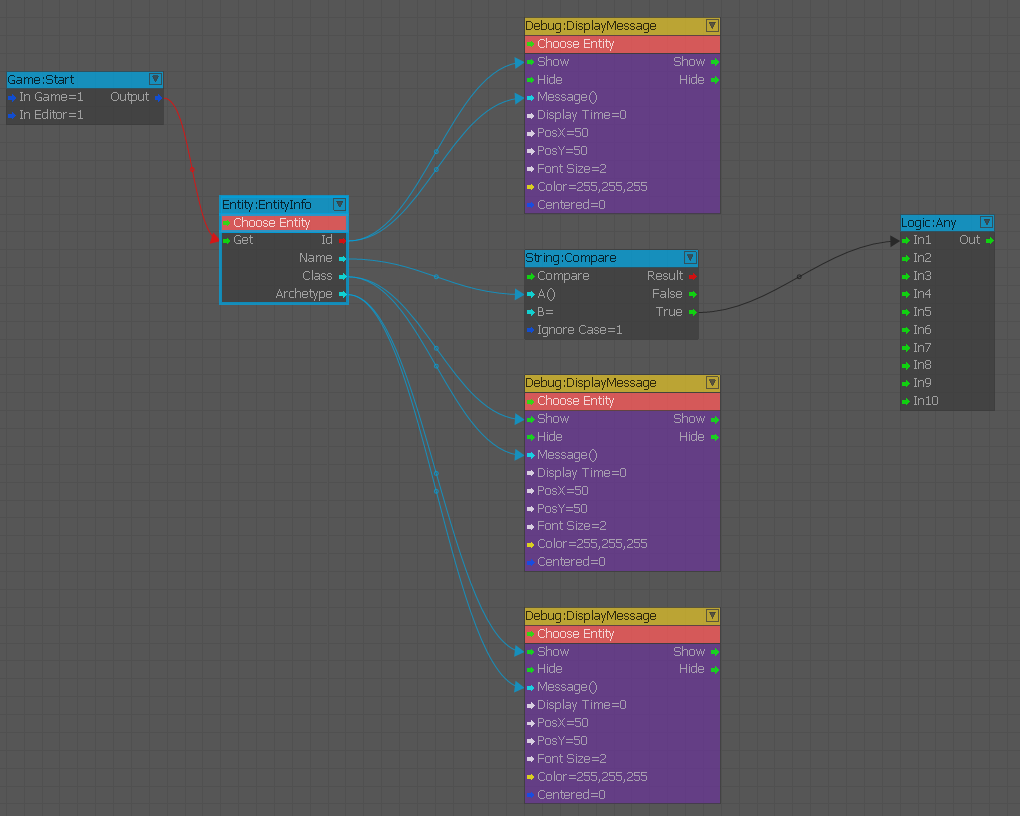 In this example, the name of the target entity of the EntityInfo node is compared to a string using a String:Compare.

Handles all position related manipulations of the owner entity. All position information of the specified entity can be read from the output ports.

Unlike the GetPos node, the output ports of this node are triggered whenever one of the target entities properties changes (i.e; when the object moves, dynamically updates). 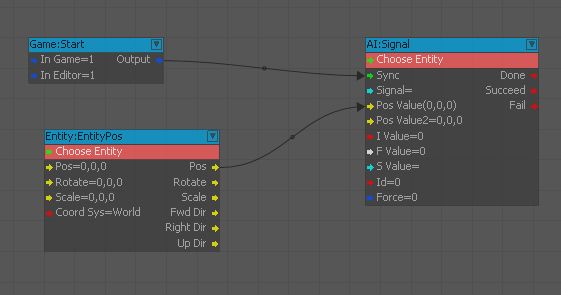 In this example, the position output port is used as a target for the entity Grunt1 to walk to with the AI:Signal node. 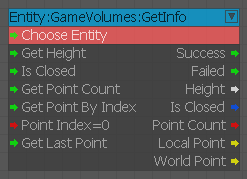 Used to get and output the bounds.

Gets information (count and IDs) of an entity's children.

The functionality of this node is similar to the EntityPos node but instead of triggering the output ports whenever any position information changes it only outputs when triggered to do so.

The only input port is the Get port, which when triggered outputs the according information on all output ports.

In situations where a constant update is too expensive the GetPos should be used instead of the EntityPos node which continuously outputs on all ports when any position value changes.

This node lets you listen to layer hiding/unhiding events.

This node lets you listen to layer hiding/unhiding events for a given entity.

This node lets you inspect the configuration of entity links. 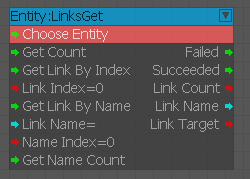 This node lets you inspect the configuration of entity links. 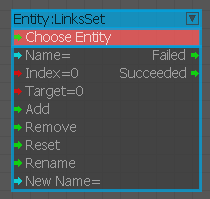 Obtain the parentID number from the specified entity.

Note: This property change will not work with SaveLoad.

Spawns an entity with the specified properties.

Spawns an archetype entity with the specified properties.

Gets the Id of the entity currently being tactical scanned.

Gets the Id of the entity that just completed (But before success or failure) being tactical scanned.

Can control the tactical scan that is currently in progress.

Gets the Id of the entity that just started being tactical scanned.