The second part of this tutorial provides screenshots of how these free environment presets look in sample levels.  You can download these presets from the Asset Database, study their settings, freely modify and use them in your own levels.

Since terrain and ocean heights are an important factor, the Asset Database bundle also provides the heightmaps used so you can download and import them into your own levels. Make sure the size of your heightmaps matches the sample you wish to import.

Volumetric fog must be disabled for this example (by typing the CVar e_VolumetricFog 0 in the Console).

Begin by creating a new environment preset and assigning it to your level.

To create a believable night look, we need to darken the sky, dim the sun, brighten the stars (and optionally, the moon), and balance the need for darkness with the need for light by which the player can navigate.

First, let's darken the sky: set Variables → Sky Light → Sun Intensity Multiplier to 0 or a very dark value. This also hides the sun's orb; otherwise, the white disc of the sun will appear in the sky. You can choose to hide the moon and use the simple white sun orb to impersonate the moon and add some illumination. Change this to 0 to hide the sun's orb and match the latitude and longitude of the sun and moon to make the sun's luminance emit from the same position as the moon texture.

The default moon texture lives in your CRYENGINE folder in engine\engine.pak\EngineAssets\Textures\Skys\Night\half_moon.dds. You can replace this with any 1024x1024 pixel TIF file using the Albedo with transparency mode in the Photoshop CryTif exporter if you like. (See Night with Custom Moon Texture below for an example.)

Next, let's set the Sun → Sun intensity (lux) to a much lower value. 0 will certainly make it dark, but will make it very difficult for the player to navigate your level without a lot of supplemental lighting. Try a value between 200 and 1000 to get started. The use of volumetric clouds can also have a profound effect on how much sunlight reaches your level. The values suggested as a starting point are not physically accurate in terms of Earth night values, but you'll find that compromises are required to allow players to see, not to mention factors like the wide range of monitor calibration out there. And, you obviously have creative license in game design. Your HDR settings will also have a strong effect on what the player sees.

Also, since the sun is below the horizon at night, any natural light comes from outer space from sunlight (very faintly from other stars, for example), and when the moon is above the horizon and not blocked by clouds, is reflected off of the moon.

It's unusual that the angle between the sun and the moon forces the sunlight to pass through the dense atmosphere close to Earth's surface, which means that the sunlight reflected by the moon is closer to the actual white color of the sunlight. (Those times when the moon receives only sunlight scattered through the denser atmosphere, the light is reddened just like you see at sunrise, creating the rare "blood moon" phenomenon.) Try setting Sun → Sun color to white or a slightly blue tint. Human beings aren't as sensitive to blue as to warm colors, so a blue tint can help create the feeling of night.

Since the moon texture itself does not produce any light, we need to synchronize the positions of the sun and the moon and use a little sunlight to pass for moonlight:

Set your Variables → Fog → Color (Bottom) and Color (Top) to a dark, slightly blue tint. Making these black will effectively turn fog off completely, along with your distance cue - perfect for the surface of the moon with its lack of atmosphere, but not very believable for Earth. 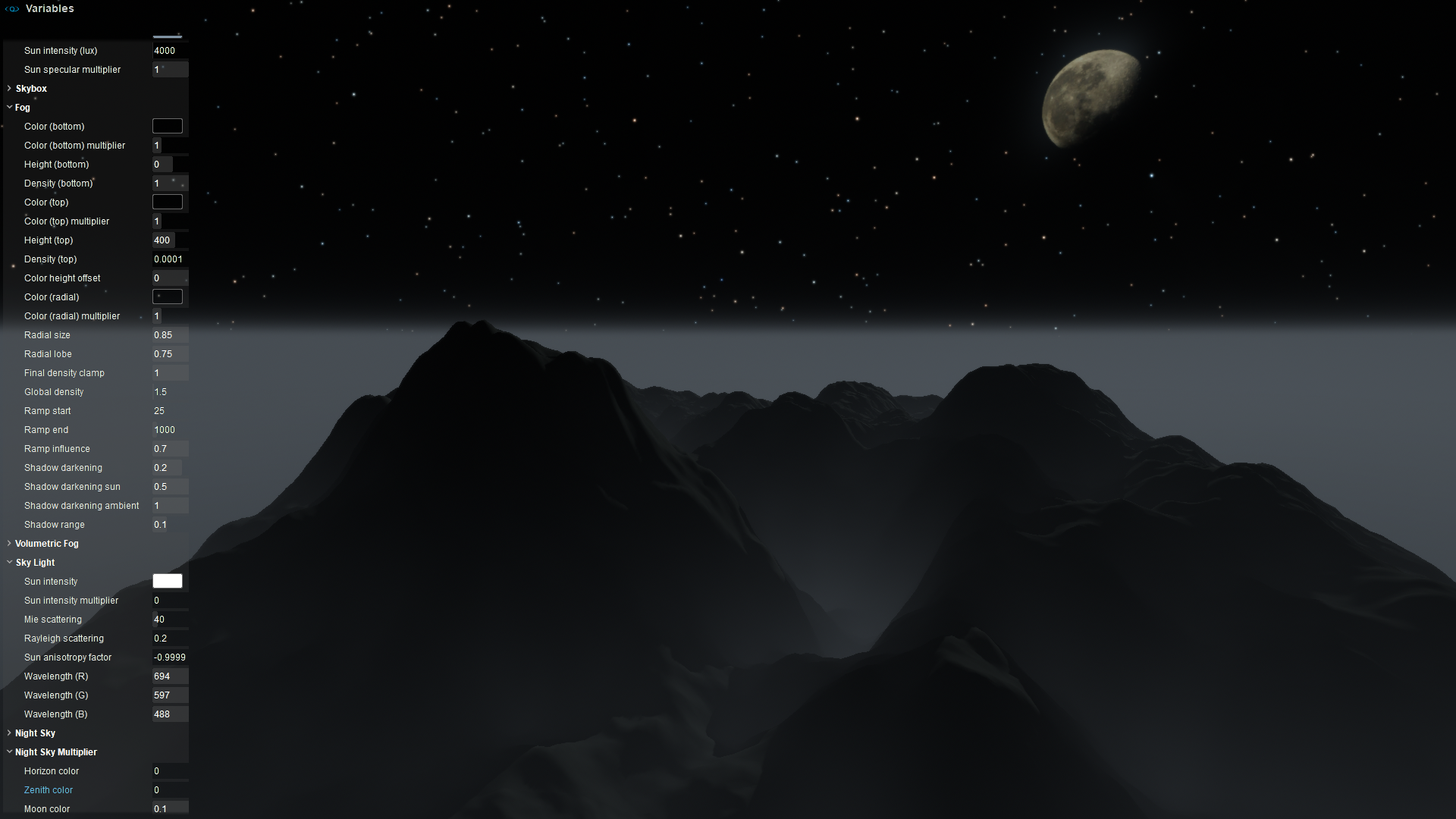 One of the more subtle aspects of creating a believable moon is setting the way light scatters around (and on top of) it. Here are four groups of settings that will affect this:

1: Sun Radial Beams - Set Variables → Fog → Color (radial). Setting this to black will remove all moon glow scattering around the moon texture, like this: 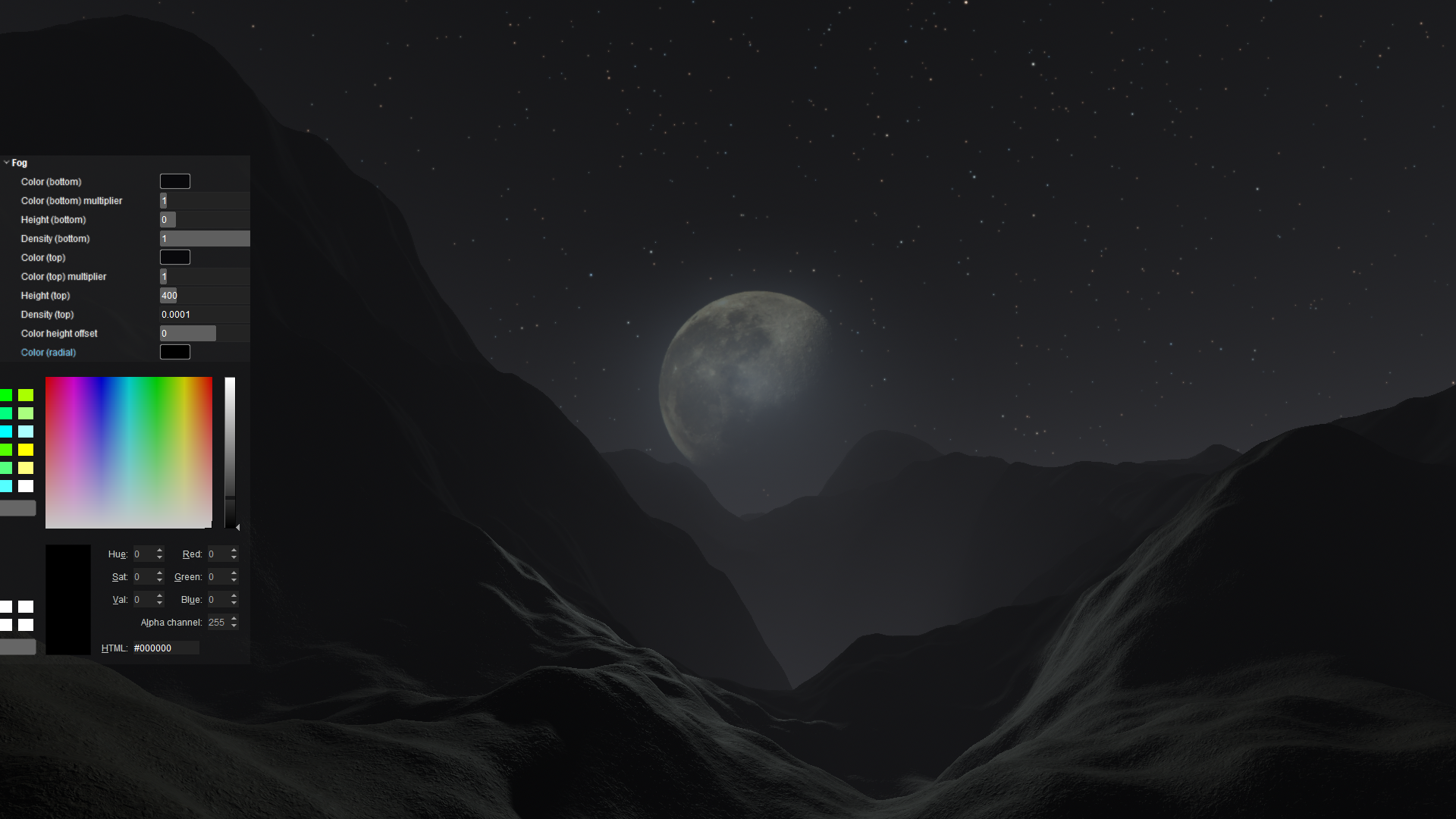 Not very realistic, is it? Make it just slightly brighter, and use Fog → Color (radial) multiplier to adjust the intensity. Be sure to set the Fog → Radial size so the glow spread makes sense with your moon size, and the Fog → Radial lobe will tweak its further spread over the terrain. Your fog density and color will also interact with this. 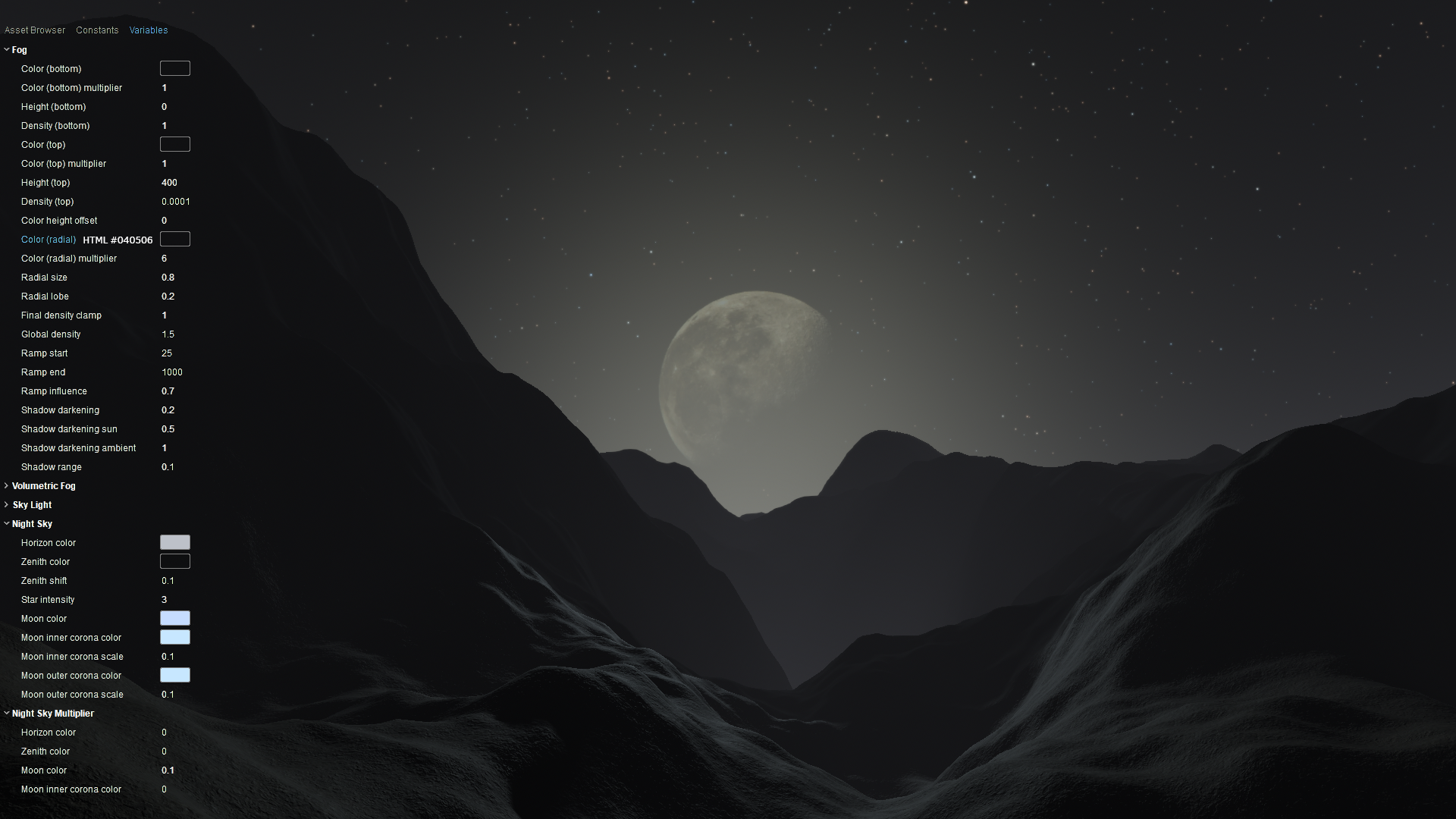 2 - Moon Corona Color - This is the recommended technique for naturalistic moon glow.

b- Set Variables → Night Sky → Moon Inner Corona Color and Moon Outer Corona Color to the desired color (and brightness) of your moon glow. (Here we've given it a slight blue tint.)

c- Adjust Variables → Night Sky → Moon Inner Corona Scale and Moon Outer Corona Scale so the glow appears to emanate from the entire moon (not a bright spot smaller than the moon itself). Try values of 0.1: 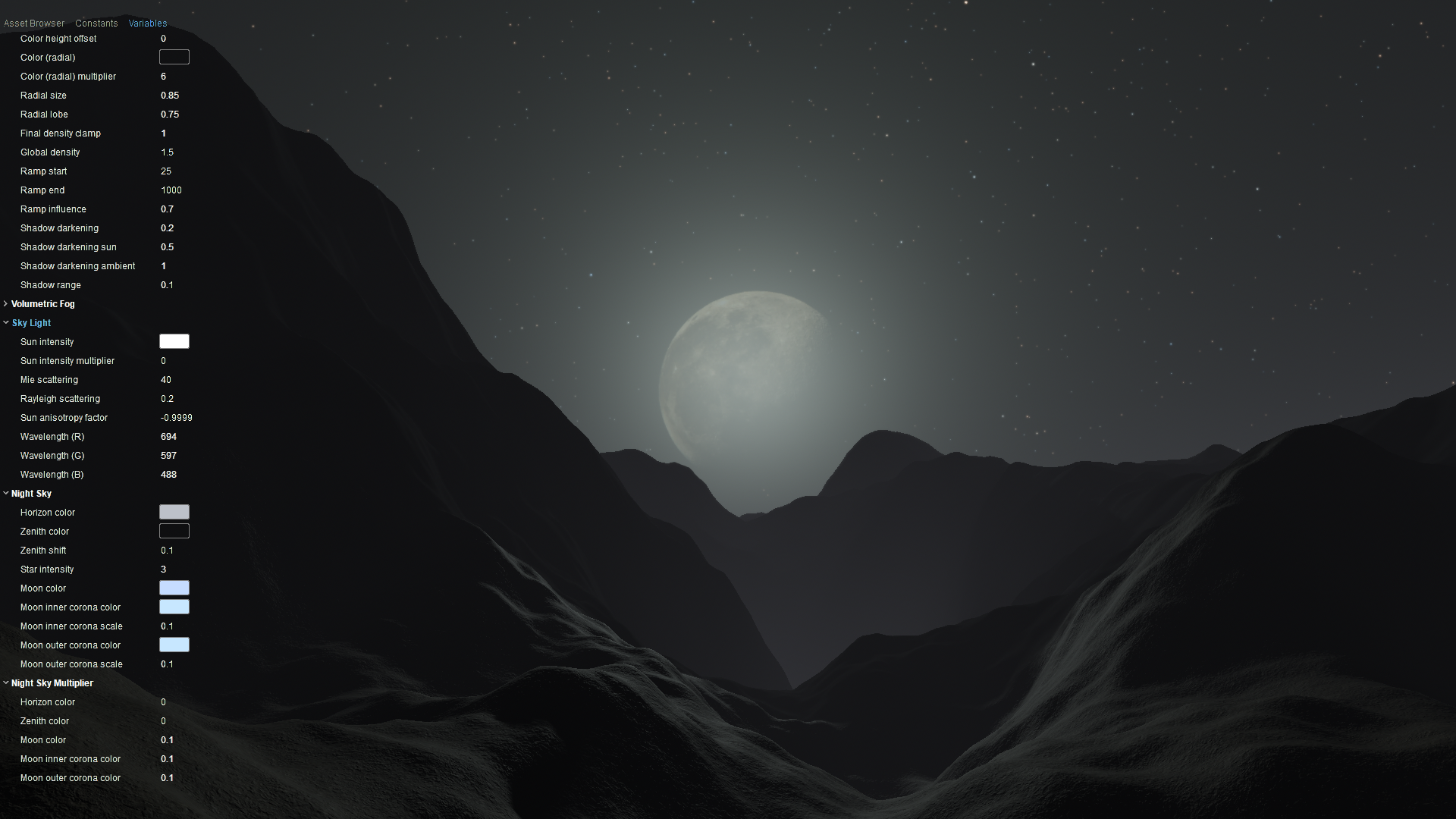 3 - Variables → Sun Rays Effect → Sun Rays Visibility - While you can raise this to a higher value for more dramatic breaking of the moonlight around the terrain and any entities, you'll need to carefully check how this looks by putting something in the foreground to inspect the sun ray breaking around it. You'll find that you'll need to balance Variables → Sun Rays Effect → Sun Rays Visibility with Sun Rays Attenuation to brighten up the moon through the use of sun rays but keep them from getting too dramatic around geometry. Try values of 2 and 6, respectively, as a starting point. We also brightened Variables → Fog → Color (Bottom) and Color (Top) slightly to create this look: 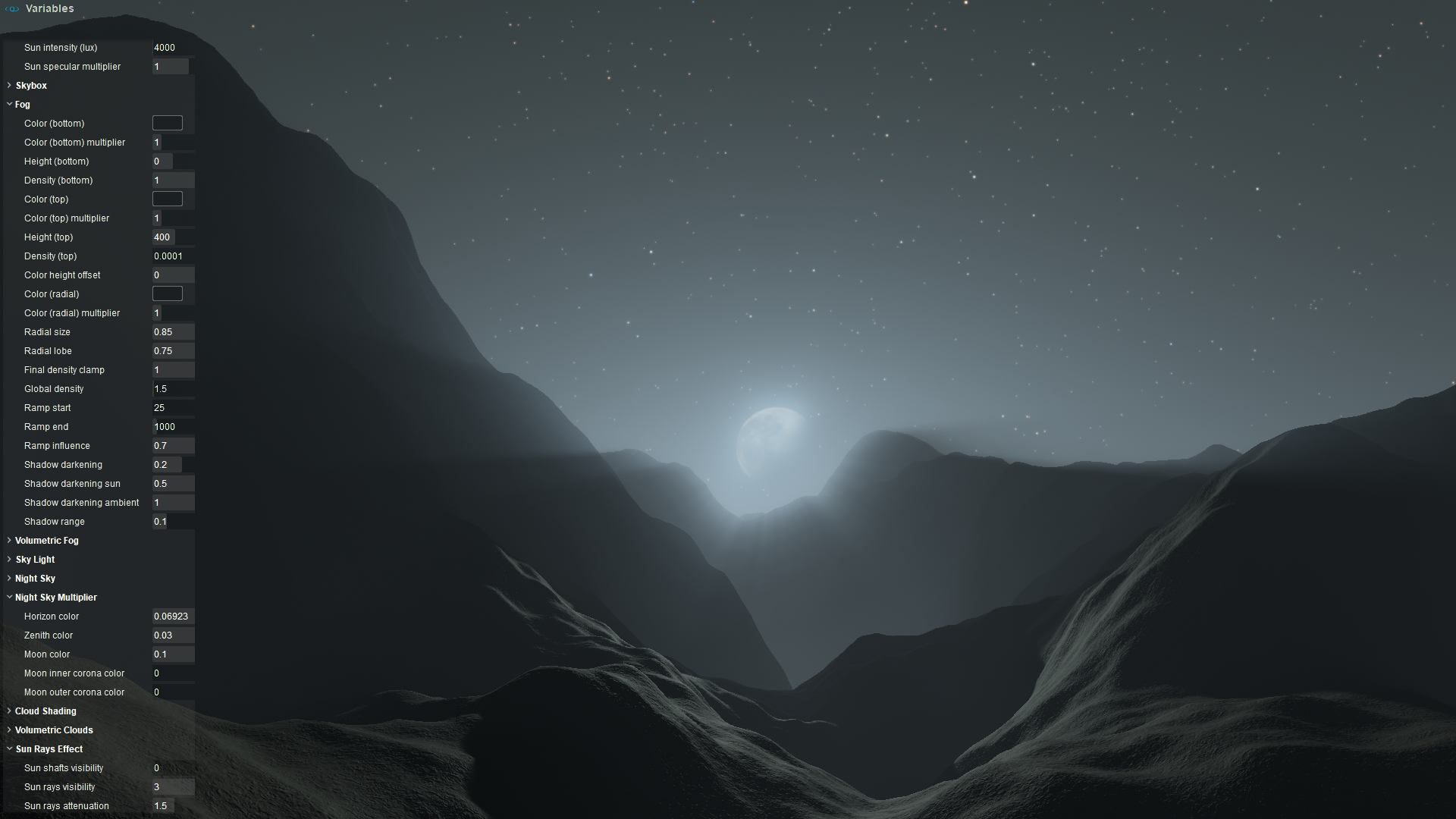 4 - Variables → Sky Light → Sun Intensity Multiplier - Setting this to a non-zero value is just going to make the sun's orb visible, which wouldn't make sense unless you'd prefer to use the sun's orb to pass as a simple white circular moon instead of a moon texture (i.e. set this to a positive value and set Variables → Night Sky Multiplier → Moon Color to 0). Obviously you'll need to keep this value low to avoid brightening the sky unrealistically.

Setting Up a Night Sky

Don't forget to add at least one global environment probe and generate cubemaps once you're finished tweaking your lighting. This will generate specular reflections as well as diffuse ambient light whose intensity you can fine-tune.

Here's the same scene with an environment probe placed dead center, its box size is set to match the heightmap size, and using a Diffuse Multiplier of 2: 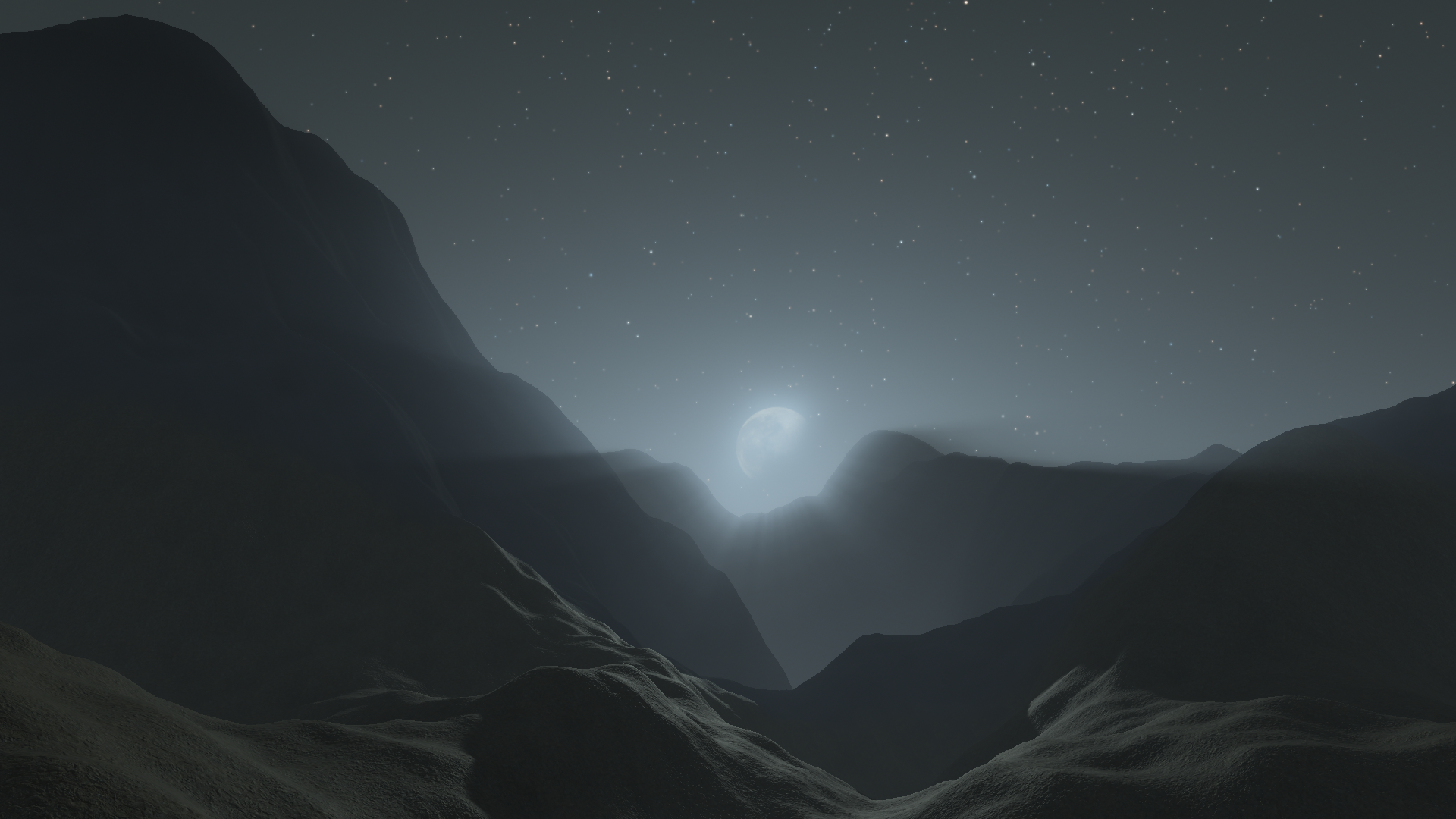 Optionally, you can also enable SVOGI to provide ambient light, although its contribution in dark night scenes may not be worth the performance cost.

In our example, we also placed a few local fog volumes (Create Object → Components → Effects → Fog Volume) in the level to simulate mist in the valley, over the river, and around the lighthouse just to enhance the beams of light.

Lastly, to make your night scene more consistent with human vision in dark conditions, you could experiment with using Variables → HDR → Saturation to desaturate the entire scene (human eyes lose color perception before they lose the ability to see tones), and/or even use Variables → HDR → Color Balance to tint the entire scene slightly blue. However, if you plan to use artificial light sources such as fire or electric lights, you may not want to desaturate the scene as a whole. Also, although there is no true digital equivalent for the human loss of sharp vision in very dark conditions, you could also subtly increase Variables → Depth of Field → Blur Amount to soften the appearance slightly.

Variables → Night Sky Multiplier → Moon Color must be 0 for the moon texture to appear, otherwise it will simply make a moon-sized hole in the sky that covers the stars. Variables → Sky Light → Sun Intensity Multiplier must be set to 0 at night unless you want the sun orb glowing on top of the moon. Optionally, if you want to use the sun as a simple, glowing orb that mimics the moon without any details of its surface, you can hide the moon texture completely by keeping Variables → Night Sky Multiplier → Moon Color at 0 and keep Variables → Sky Light → Sun Intensity Multiplier above zero to keep the sun visible. Remember that the size and visibility of the sun orb is also affected by the halo of light scattered around it, controlled by Variables → Sun Rays Effect → Sun Rays Visibility. 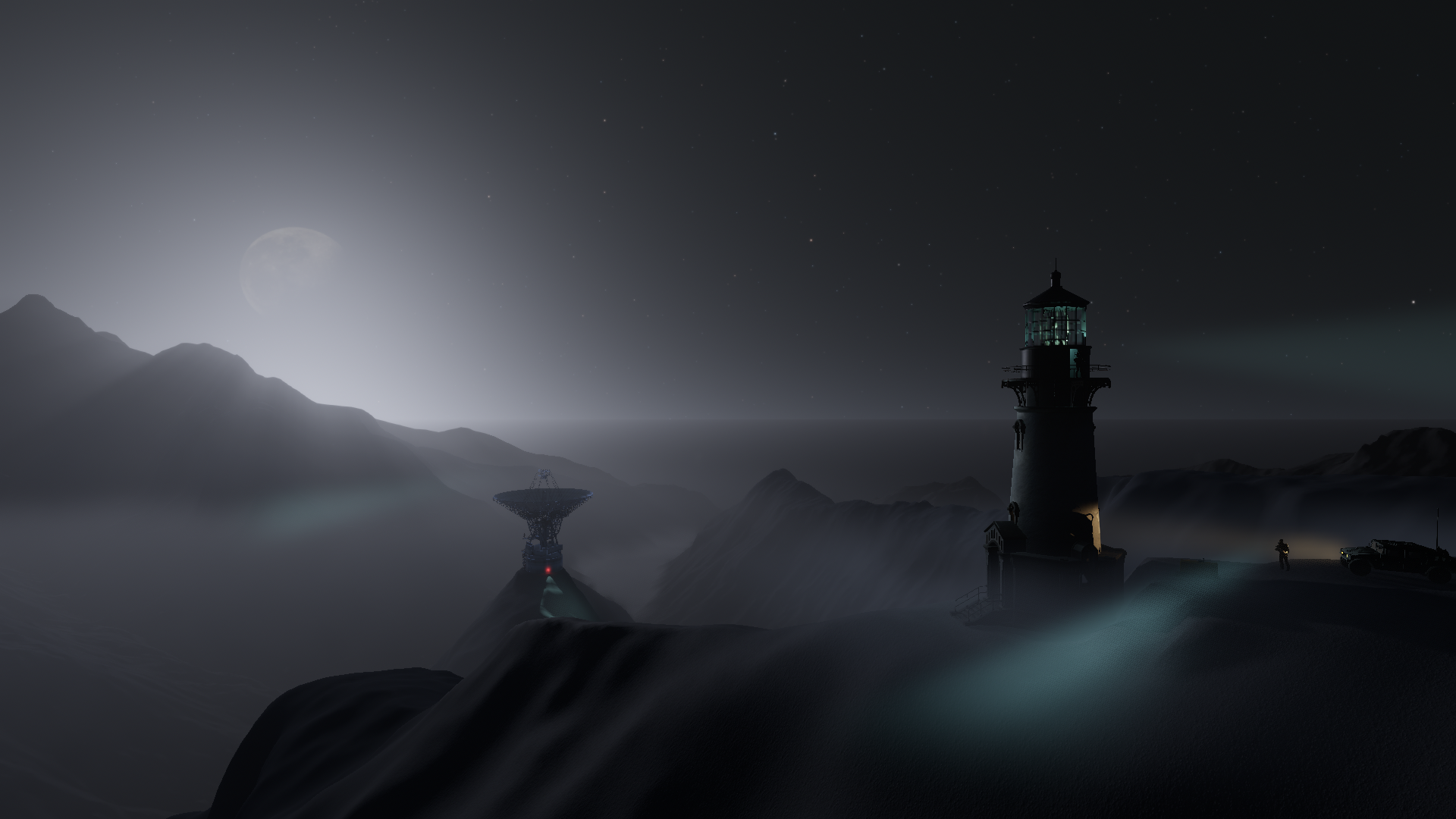 Above is the environment preset you just created and implemented in a mountainous level. Here, three volumetric fog volumes are used (river, valley, lighthouse).

Since these environment presets are tailored to the terrain heightmaps and ocean height, you can also download the heightmaps used in all examples (except where otherwise noted) here.
In the Terrain Editor, change Edit → Set Terrain Max Height to 562m before importing.)

Although this example is not downloadable, it demonstrates the use of a custom moon texture using a Hubble telescope image of Titan, tinted red using Variables → Night Sky → Moon Color, the color of the sunlight is set to a similar color to cast red light on the terrain, and just for extra fun, set the fog color to dark green. SVOGI and volumetric fog were both disabled. 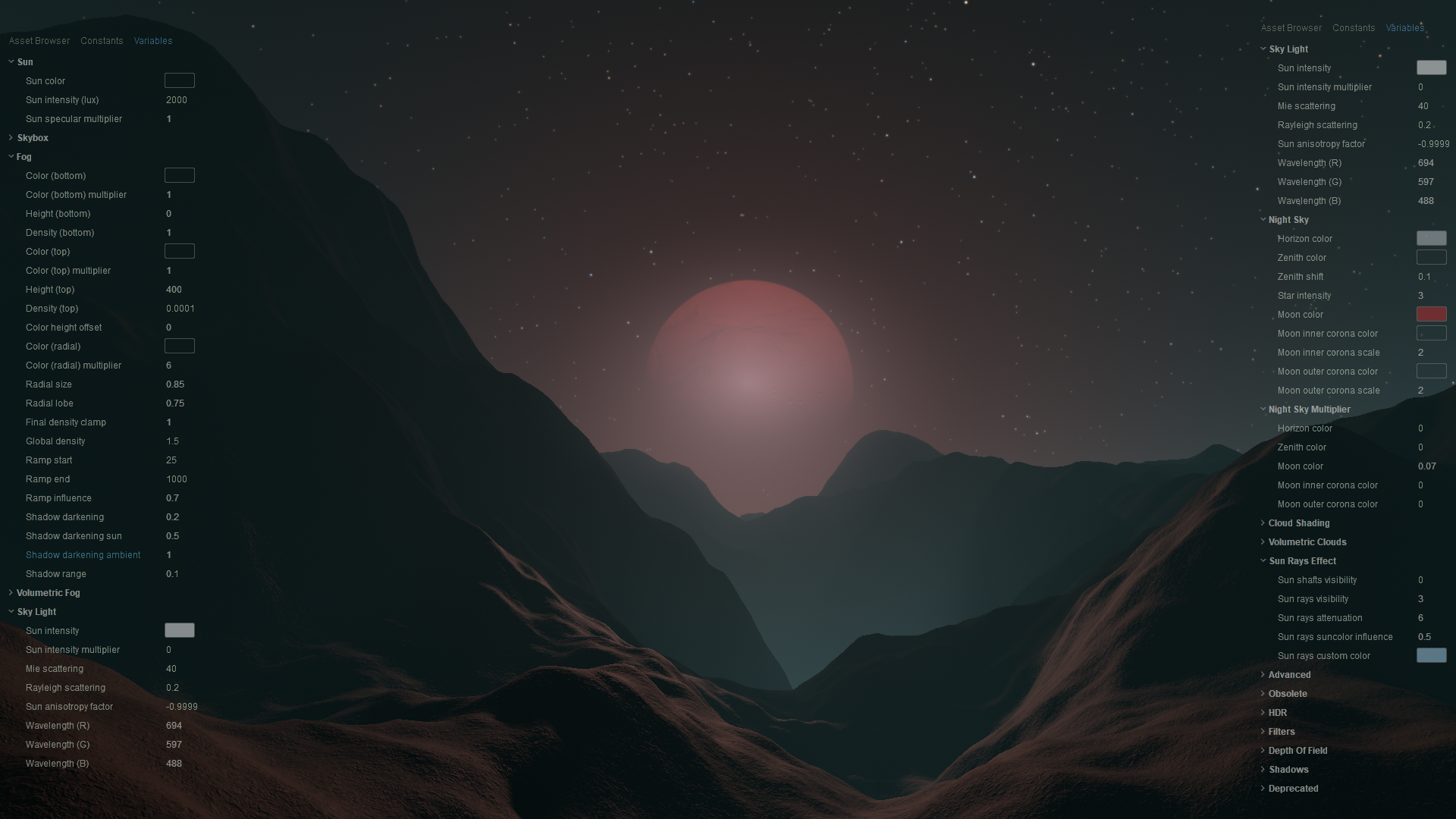