The primary function of the texture dialog is to add meta data to the texture, which the Resource Compiler can later use to create a texture tailored for the target platform. Several settings like compression scheme, mipmap generation parameters, and also normalmap/alpha map combinations can be configured in the dialog. The user interface is a part of the Resource Compiler and is launched when saving a file as CryTIF from Photoshop.

The CryTIF (*.tif) format is used as an intermediate file format, based on the TIFF format, which contains the uncompressed texture as well as the different settings for the Resource Compiler stored as meta information. Whenever saving a texture as a *.tif (CryTIF) file, the plugin sends the texture to the Resource Compiler, creating a texture in the file format specifically for the target platform. By using presets on an uncompressed texture, the final output format can be specified in a very flexible way. Engineers can easily instruct the Resource Compiler to create a PC and console texture with optimal settings specific to the target platform from a single source file.

Please note that the TIF is not reloaded after its meta data was modified in the RC user dialog. So if the file is saved again in Photoshop without having been reloaded before, the settings need to be specified again.

Creating *.dds files directly without the Resource Compiler is not recommended or supported.

In order to save a texture in Photoshop, go to the File menu, click Save. When the file dialog shows up, choose CryTIF as the format, choose a name and save. After the *.tif file has been written to disk, the texture dialog of the Resource Compiler will show up.

In order to use a source texture (.tif) in CRYENGINE, the Resource Compiler must be invoked to compile the texture to a more optimized format that can be loaded efficiently by the engine (usually *.dds).

When a *.tif file is saved with the CryTIF Plugin for Photoshop, the plugin opens the texture dialog of the Resource Compiler where specific settings for the texture can be made.

In the upper area you can see two images, the original image on the left, and a preview of the processed image using the preset on the right.

Directly below the preview images, you can see different image properties such as resolution, number of mip maps, texture format, and memory. The original values are displayed on the left, the values on the right are based on the chosen preset or the custom settings. 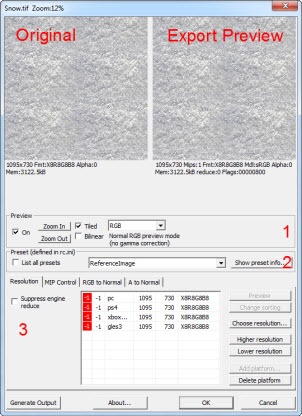 The presets define how a texture gets compiled for in-game usage.

This drop-down list holds the presets that you can assign to a texture. By default, the RC tries to identify the texture type by looking at the file name suffix (e.g. _ddn, _ddna) and displays only the presets relevant for that type.

The texture compiled using the preset settings is automatically displayed in the preview window on the right. Texture properties are also updated.

The list below describes the full set of available texture presets. It can be extended by adding new entries to the RC config file located at Tools/rc/rc.ini.

Reduce Resolution drop-down list lets you select different resolution adjustments. Useful if you keep the source file in a huge resolution, although you know it will appear in a much smaller size in the game (i.e. a texture used for promotion and for the final game asset).

There might be automatic texture resizing processes inside the engine in place. Please check with your programmers, if they enabled such optimizations for your development environment. Additionally the Resolution tab features optimization and exception functions.

The controls allow the manual adjustment of the Alpha channel mip maps. This is especially useful when the texture contains fine details, like in a chain link fence.

You can shift the alphatest bias in the different mip levels using the sliders. The value of the texture is adjusted and assuming a constant alphatest value you can tweak the result.

The lowest slider, which you see when you scroll down, controls the mip sharpening. This is a sharpness filter that is applied to the mip maps to counteract the blur that naturally occurs when down-scaling the textures during mip map generation. This feature can greatly improve image quality. The default value is 35.

Maintain alpha test coverage tries to preserve the alpha coverage of the original alpha channel. This is particularly useful for vegetation to prevent leaves from thinning out in the distance.

The Mip filter method allows to change the downsampling algorithm used to generate the mip maps.

The CryTIF plugin can convert a grayscale bumpmap into a normal map. To activate the feature, select a Filter Type other than None (off).

A to Normal Tab (Deprecated)

As this function is done after scaling and using a proprietary sharpening algorithm, as well as a normalization pass on the low frequency normal map, the detail is better than in the traditional approach. It also allows it to be tweaked much more easily. To enable this feature, select a Filter Type other than None (off).

The preview window should change now to indicate the change.

Please note that with PBR in CRYENGINE, the alpha channel of the normal map usually contains the smoothness already, so this feature has to be considered as deprecated.

Pressing the Generate Output button forces an immediate conversion to the target output format without closing the CryTIF dialog box.

It is then possible to switch to CRYENGINE and look at the results of the settings that you have changed (Sandbox automatically reloads/updates changed textures). This is useful for quickly testing compression settings without re-saving or reopening the dialog box every time you make a change.

Please note that the TIF is not reloaded after its meta data was modified in the RC user dialog. So if the file is saved again in Photoshop without having been reloaded before, the settings need to be specified again.

In order to run the RC, the CryTIF plugin needs to know the path where the RC is located. This can be configured in Photoshop under Help -> About Plugin -> CryTIFPlugin. If the RC executable cannot be found, the configuration dialog is opened automatically.