To begin working with CRYENGINE, you must first create or import a project. This will be your game's foundation.

Projects can be created through the Launcher or, in the case of more recent CRYENGINE versions, through the Sandbox Editor itself.

To create a new project for a specific version of CRYENGINE via the Launcher, this is what you need to do:

From CRYENGINE release 5.6 onwards, projects are created directly in the Sandbox Editor through the Project Browser.

Choosing to create your project through the Launcher with CRYENGINE 5.6 or later versions will bring up the following prompt: 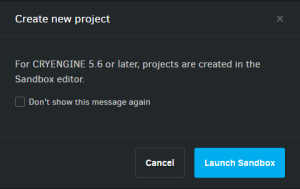 To import a previously created CRYENGINE project that is not listed in the Launcher:

The imported project will then be listed in the Projects library.

Importing projects that were created using Launcher versions prior to V.1.6.6 (available from the 18th of May, 2017) may cause their names to be changed; an imported project might be automatically renamed to Blank Game Template, for instance.

Projects created in CRYENGINE version 5.2 and onwards can be upgraded to work with newer Engine versions.

To do that, proceed as follows:

When updating from an older version of the Launcher, some of your assets might need to be migrated in order to sync correctly with the updated Launcher version. When this is the case, you will receive the following prompt: 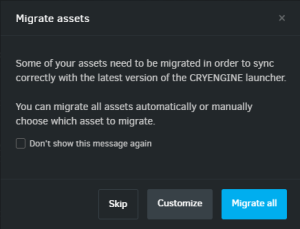 Errors might arise while upgrading projects, due to the differing interfaces of different Engine versions; this can be fixed manually. In the event of an unexpected error, an output.log file will be generated in the project's storage directory, which can be reviewed to determine the cause of the error.

Please note however that,