It is possible to use the Flow Graph to create full screen effects. This document explains the nodes and functions for making these effects.

In order to reproduce the following settings in the Flow Graph, a basic understanding of the tool is required. For more information, please refer to the Flow Graph page.

Found in Camera. These nodes can make camera effects. ViewShake generates random shake animation of the camera. It is effective to connect with explosive effects.

This can be found in Add Node → Image. Image nodes are used to expose post process effects that can be used for gameplay or cutscenes purposes.

Multiple nodes can be used at same time to mix their results for different effects, but be aware that each of these nodes adds an extra rendering pass over the screen, so make sure to limit amount of nodes usage at same time to a reasonable amount. Most GPU expensive effects are marked with an expensive note on them on this document.

When using the image or camera nodes it's not necessary to set an entity to the Image nodes, they will automatically be assigned to the local player and even though most of the nodes have the enabled and disabled input it's safer to ignore the disabled input and just use the enabled input and set it to be true or false. The inputs are also of the boolean type and so it's always best to combine these nodes with the Math:BooleanTo node to be sure that the correct values are being sent to the image node.

Here is an example of a flowgraph that turns on/off the FilterBlur fullscreen FX with input keys:

Full usage information on these nodes can be found here: Image Nodes

To implement full screen effect to the particle effect, its flow graph has to use these nodes. Found in Add Node/MaterialFX.

Decline the start of the full screen effect to the engine.

Decline the end of a full screen effect to the engine.

To actually make full screen effect Flow Graph, you have to use some more general nodes. Here are some examples:

This is an example Flow Graph of the impact effect of nuclear weapon. 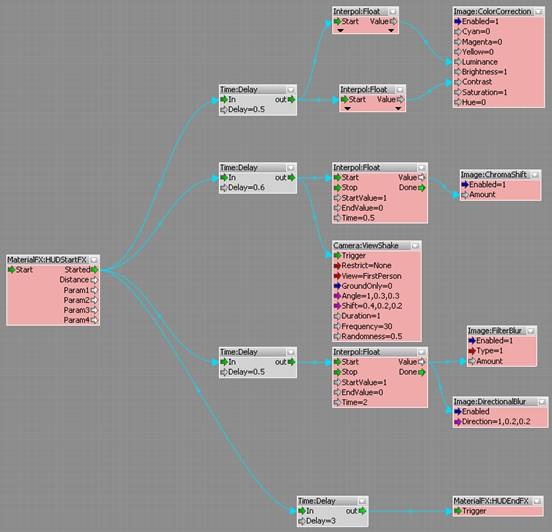 Fade in Textures on Screen

This is an example Flow Graph of the dirt effect on the screen, when player was near to explosion.