Although particle effects provide a wide range of Feature implementations that can be used to make all kinds of effects, their true power is only achieved when Modifiers are used to dynamically alter the effect behavior.

Each Modifier takes that property value and then manipulates it in a specific way and sends the modified value to the next element in the stack. Some of these combine the output value of the previous Modifier with their own input by multiplying them.

dropdown button found next to a property that supports Modifiers. When assigned, each Modifier manipulates the corresponding value in a specific way.

Depending on the property in question and the settings of the Modifier, its logic can be applied on each Component. For example, each Modifier logic can be used on a newly spawned particle or each particle in every frame.

With this option, users can modify the original property based on an effect's Attribute.

This Modifier is an alternative way of using Attributes. Another way would be to use Linear (Function-based Modifier) with source option set to Attribute.

This option allows users to combine properties that are modified with a Domain; however, it doesn't apply any additional modification. In this Modifier, only the function-based properties are used. Please refer to Function-based Modifiers Common Settings for more information.

Uses a potential field based on Perlin noise to randomize the input property.

Unlike the Random Modifier, which tends to get fuzzy or diffuse, the Noise Modifier adds smooth variations to the particles.

Use Domain Scale and Domain Bias to change the frequency and phase of noise. However, if the Domain Scale value is too high, Noise starts to behave closer to pure randomness and fuzziness; as a result, diffuse might start to arise.

This Modifier is used to provide different types of periodic values. Its options are based on trigonometric mathematics and are useful to add regular behaviors as opposed to variance.

Use Domain Scale and Domain Bias to change the frequency and phase of a wave. 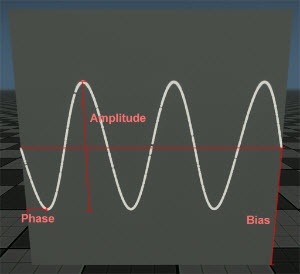 Provides a fast way to add simple variations to the particle behavior.

This Modifier can only affect newly spawned particles.

Unlike Curve, the Double Curve Modifier uses two Bezier curves, in this Modifier, the Domain is used to sample both curves at the same time, while the Random field of the particle is used to interpolate between the lower and the upper Bezier curves.

Uses the domain input to sample a Bezier curve. In particles, Bezier curves have an unlimited number of points; however, each point has to be in the range from 0 to 1 on the X axis and there are no enforced limits on the Y axis. For performance reasons, Bezier points support slopes, but not the slope weight.

Many of the Particle Effect Modifiers are function-based. This allows the Modifier to accept not only the input from the property value modified by previous Modifiers, but also other aspects of the particle. All of these Modifiers have a common set of properties.

Currently, Modifiers have a very limited support in the current GPU pipeline. At the moment, the only Modifier that can be used is the Curve Modifier, and it can only be used when Owner is set to Self.