You can create a default particle effect through the Asset Browser. To do so, open the Asset Browser, browse to the folder where you want to create the particle, right-click on an empty space in the folder and choose New → Particle from the context menu.

For more information about the particle effect creation workflow, please refer to the Creating a Particle Effect page. 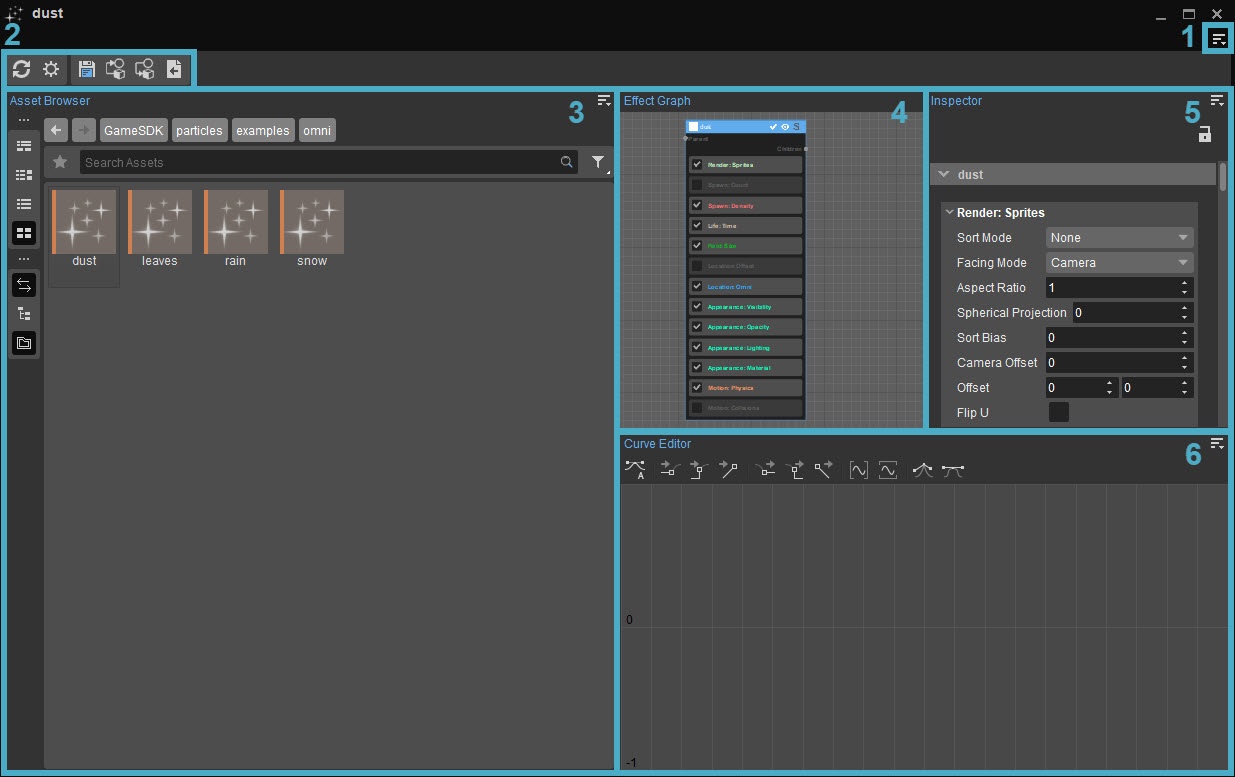 When the Sync Selection

button in the toolbar is active, selecting a different asset in a tool-specific Asset Browser will instantly open it. This button makes it very easy to cycle through different assets and edit them on the fly.

Users can navigate around the Effect Graph panel by holding and dragging the RMB on an empty space.

Each feature that is available on a component can be moved around by dragging & dropping.

button on the Effect Toolbar.

Attributes are used to establish a layer of communication between the Particle Editor and other systems in the Engine, or to influence a property's value individually and/or dynamically.

They can, for instance, be used;

When used in conjunction with other systems, e.g. Flow Graph nodes, Attributes can work in line with in-game events, influencing the property to which it's attached in a certain way, at a certain time. 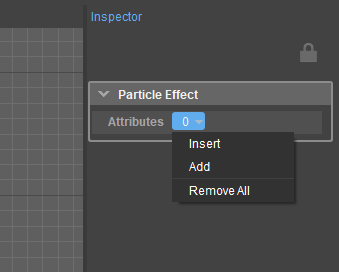 To add an Attribute to the particle effect, click the Attributes

To remove all Attributes, choose the Remove All option from the

dropdown menu displayed in the image above.

To remove Attributes individually, right-click one, and choose Remove.

When a new Attribute is added to the particle effect, it appears in the Properties panel, under the Emitter Attributes section, where each Attribute is listed along with a value field or a check box, depending on its value type.

Value changes made in the Properties panel are applied only to the selected instance of the particle effect.

To change the value of an Attribute in all instances of a particle effect, modify its value in Effect Options.

button lets you revert an Attribute to its default value, which is by default 0, or it can be set in the Particle Editor's Effect Options.

For more information about how to use attributes in an effect, please see Modifiers.

The Curve Editor can be used to tweak certain properties much in the same way that users can in the Environment Editor. It shows the progression of the values for the selected feature over the course of a specific time and how gradually they change. It is especially useful when time-based periodic changes are envisioned for a particle effect.

In order to edit the particle effect features on the Curve Editor panel, Color Modifiers or a feature with the Curve or the Double Curve modifier should be selected.

For more information about Curve and Double Curve modifiers, see the Modifiers page.

For more information about Features that support modifiers, refer to Particle Effect Features. 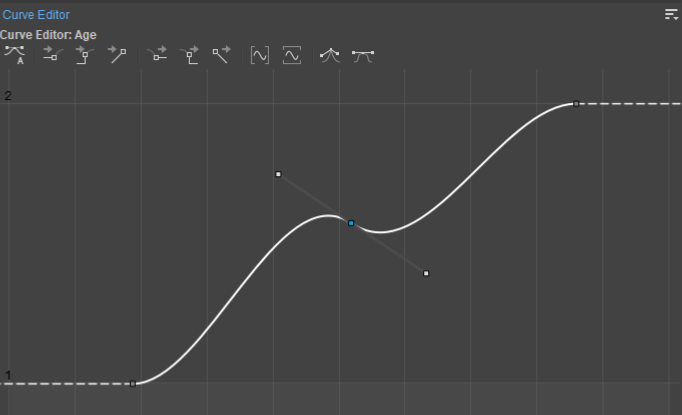 Curves in the Particle Editor are not affected by the size of the handles (derivative weight). This is for performance reasons since these curves are to be evaluated for every particle every frame.

Holding the Shift key will let users move the keys horizontally or vertically on a straight line. 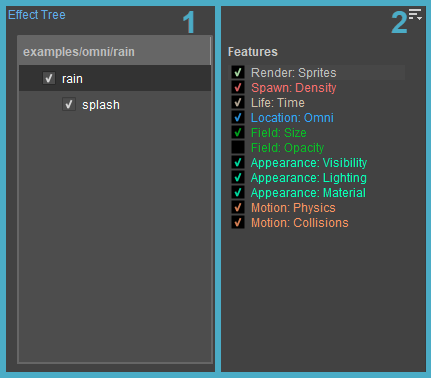 Components can be enabled or disabled by left-clicking on the checkbox next to the name field of any component.

To rename components, double-click on the name field of the component.

To move and re-parent components, select a component and drag it on a new parent.

To separate a child from a parent component, drag and drop the child on an empty field below or above another component. When moving a component, a line will appear to indicate on which level the selected component will end up when it is released.

Features can be enabled or disabled by clicking on the checkbox next to the name field.

The list hierarchy of the features can be reorganized by dragging and dropping it to the desired position.