Physics constraints can be used by adding components to your entity. This is done by selecting your entity and going to Properties → Add Component.

Before you start, please consider the following:

Adding a Point Constraint to your entity will add it at the pivot. It appears as a yellow sphere: 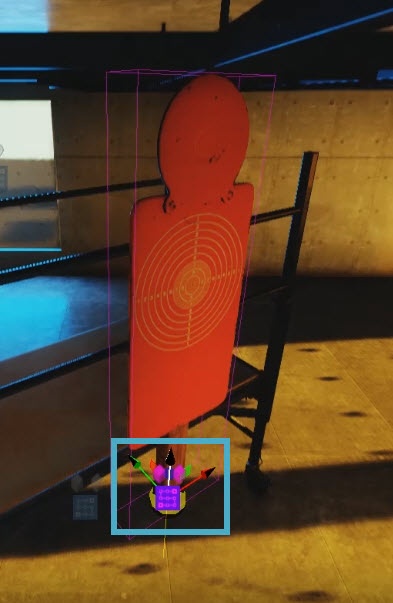 To see the Constraint helper better, you can turn on Wireframe view with ALT + W or by typing viewport.toggle_wireframe_mode in the Console.

Depending on where the point that your entity moves around should be, you can move it with the Point Constraint's Transform → Translation options: 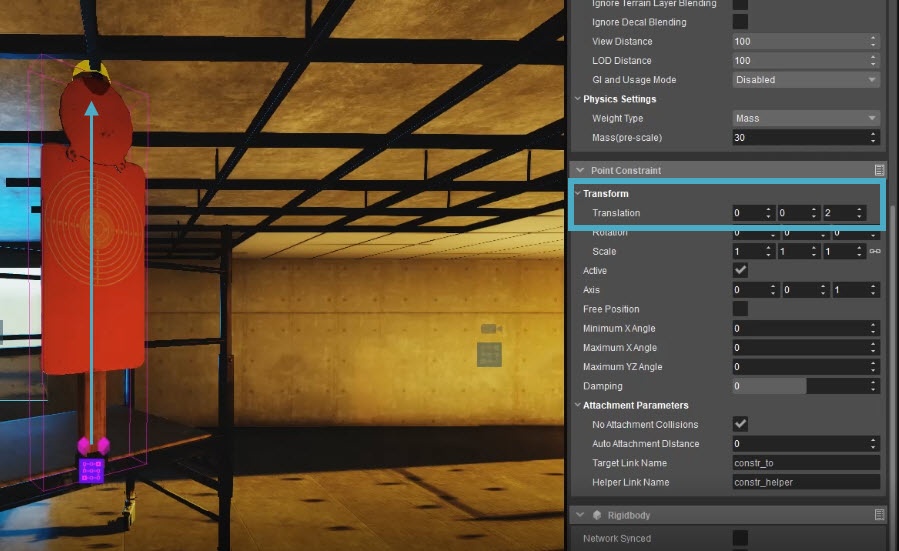 You can now enable physics (1) and pull the entity around with the Physics Tool (2):

You will notice that the entity will keep swinging back and forth with the same speed, over the same distance. To make sure it slows down, which is the natural behavior, you can change the Damping property. 01 to 0.4 is a common range to use.

Adding a Point Constraint prevents the entity from moving from its position (as long as Free Position is disabled), while allowing it to rotate in any direction (with the default values of 0 assigned to Minimum X Angle and Maximum X Angle).

If you just want your entity to swing along one axis like a pendulum, tweak the following parameters:

Note that the default values of zero on constraints don't mean the object has zero degrees of movement; it means unlimited movement. To allow a specific range of movement, use non-zero values. Generally, you'll want to set the Minimum X Angle to a negative value, like -40, and the Maximum X Angle to same value in the positive range, like 40. You'll then get this effect:

You'll have noticed that the entity now doesn't twist around anymore. If you still want to give it a bit of a twist, you can change Maximum YZ Angle. When you pull the entity, you'll then see a cone attached to the constraint, indicating how much it will twist around it: 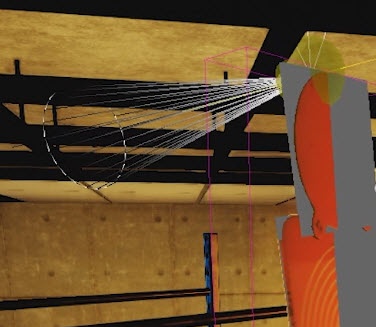 If you want to make it swing along another axis with the same range and twist, simply change the Axis.

It is also possible to offset the Constraint from the entity by changing the Translation values so it swings in an arc around the Point Constraint:

Adding a Line Constraint to your entity will add it at the pivot, just like the Point Constraint. It is constrained along the Z-axis by default.

This will make the attached entity move along a straight line, like so:

The yellow line you can see in the .gif above is the Line Constraint.

To make it go along a different axis, set the Z axis to 0 and the other axis to 1. In the example above, the axes were set up as follows:

To change how far the entity moves to either side of the entity (along the Line Constraint, of course), change the Minimum Limit and Maximum Limit. Remember that the default values of zero on constraints don't mean the object cannot move; rather, it means unlimited movement. To allow a specific range of movement, use non-zero values.

Making one of these negative will turn the Line Constraint 180°.

You can even rotate the Line Constraint on 3 axes this way: 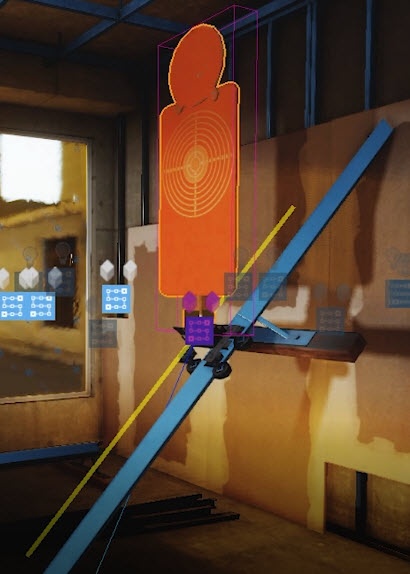 Plane Constraints make your entity move parallel to a flat surface, like the ground.

Plane Constraints don't have to be horizontal, they can also be at an angle, so the entity goes up and down a hill, for example. This is done with the Rotation property.

By default, Twist Rotation Min Angle and Twist Rotation Max Angle are set to -360 and 360 respectively. This means the entity is allowed to spin around its Z-axis freely:

Setting these to 0 will make sure the entity always faces the same way, or a range of values can be used to limit the degree of rotation.

If instead of spinning, you want your entity to wobble around its axis from the point where the Plane Constraint intersects the line on its perpendicular axis, enter a value in the Bend Max Angle property. When pulling it around with the Physics Tool, it will display a cone on this intersection, showing the angle of movement:

To watch a video tutorial about these Constraints, see below.