Before attempting this tutorial we recommend that you read the Entity Components (From Engine Version 5.6) documentation. Doing so will give you a much better understanding of the concepts behind CRYENGINE's Entity Components, furthermore, the documentation can be used as a reference guide in regard to the various attributes/parameters that relate to each of the available Components.

Different methods can be used to create a new Entity. For more information see the Creating an Entity documentation.

Before you begin creating a light, use the Environment Editor to change the time of day to night so the sun doesn't overpower your lights. While you can add a light component to an existing entity (such as a visible mesh representing a light bulb or fixture), it can also be added as a component independent of any entity. In this case, the light component itself is invisible to the player; only its effect is seen: 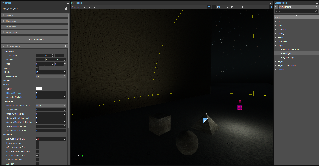 Adding a point light component to the level

You can also control the brightness of specular highlights independently using Color -> Specular Multiplier. For example, project a light onto a sphere so you can see the specular reflection of the light source on the ball. Set Specular Multiplier to 0 and the highlight disappears completely. Increase it and the highlight brightens and enlarges. However, we recommend leaving this parameter at the default value of 1 to produce physically accurate specular reflections, and using Diffuse Multiplier to control brightness.

By default, light components do not cast shadows; you can enable them by setting the Shadows -> Minimum Shadow Graphics setting to something other than None. Remember that this it not a quality setting, but determines within which system shadow spec an occluding entity will cast a shadow. Individual objects must have shadows enabled and an equal or lower Minimum Shadow Graphics setting to a light in order to cast a shadow from that light. Casting shadows is computationally expensive, so it will always be necessary to use shadow-casting lights selectively.

It's important to understand that it's much more expensive to ask a point light to cast shadows than a projector light - six times as expensive because it radiates in all directions. Even if a projector light's angle is set to the maximum of 180°, it will still be one sixth as computationally expensive as a point light. While you might think that you could simply place a point light against a surface so it can only radiate over a 180° angle, the point light doesn't know about the existence of that surface, and continues to project over a 360° angle of dispersion and assumes that any entities in its path will need to calculate shadows from its beam (at least for entities for which shadows have been enabled).

Range is the maximum distance (in meters) that the light can reach. To mimic light in the real world, light "falls off" (diminishes in brightness) exponentially with the distance from the light source (where Brightness = 1/Distance2). However, there are two other factors that will affect this:

The Options > Attenuation Bulb Size property sets the radius within which its brightness will be 100% (as set by the Diffuse Multiplier). In other words, falloff does not begin until outside this radius. 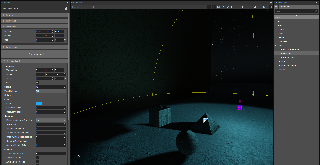 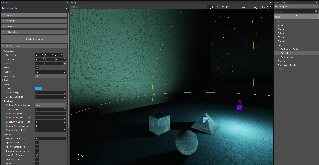 Changing the light color and intensity. You can also see the falloff in intensity within the 10m radius

In addition to controlling light color, brightness and other parameters through game code and visual scripting, the brightness and color of light components can also be varied over time using the Style > Animations property. Many pre-programmed animations are supplied, including various speeds of pulsing, flickering, varying color. Some of these mimic flickering firelight, for example. The "Speed" attribute will change the playback speed of the animation. For example, light styles #36 and 39 work well to simulate flickering fire; 36 varies the brightness of the light to a greater degree.

You can get more information on shaders in the technical documentation here. You can also view a video tutorial on modifying shaders on our YouTube channel here.

Setting Up an Area Light

As of CRYENGINE 5.6, point lights can function as area lights - light emanating from a large, flat surface. These can be either rectangular or ellipsoidal. This mimics what happens when a real-world light source is either bounced off of a large white surface or projected through a large sheet of translucent white material. In either case, the entire surface effectively becomes the light source.

In real life, beams of light passing through or bounced from a large surface are also scattered in many directions, producing shadows that are each in slightly different locations. Together, these many shadows appear as a soft-edged shadow. However, area lights in the engine do not produce soft shadows. In fact, shadows cannot be used with area lights at all. This is consistent with the common use of soft lights as fill lights that should not cast a second shadow in real-world photographic or cinematographic lighting. They supplement a main light source but still feel "invisible" or directionless. Despite this, area lights have many practical uses to supplement lighting and produce beautiful, realistic reflections as if from a large source.

However, if you move your area light close to a surface with the default Attenuation Bulb Size setting of .1 and look closely, you'll notice that the light is still emanating and falling off exponentially from the center point of the point light component. In other words, it is not even across the entire width and height of the area light (a 5x5m rectangle in this case), as seen in the image below. It is not realistic if used this way. 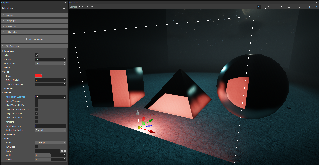 Incorrect setup for an Area Light with Attenuation Bulb Size not creating correct evenness across the entire area. Note the large reflection of the entire area light in the objects 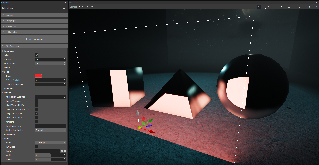 Note that like projector lights, you can also choose to project a texture with an area light to shape its look further (Shape > Texture). In the example below, we've assigned a texture from the GameSDK assets (textures/lights/scatter.dds), which looks like this: 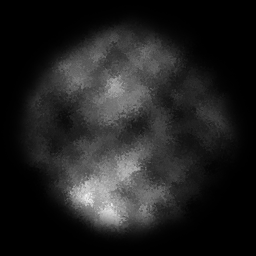 The texture provides some organic imperfections to break up the even wash of light from a light with no texture. You'll notice that the shiny metal sphere reflects the circular texture, even though it's projected through a rectangular area light shape. You can see the result below. For information on creating your own projection textures, see the Tutorial - Projector Light Component page.

(Note that in the image below, the specular highlights on the sphere come from the blue backlight and the moon hanging above the scene out of view.) 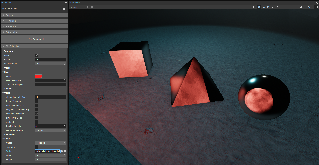