The DRS system is a tool that taps into all other systems to allow the developer to nest complex dialogue and story within their games in an interface that consolidates all the connected data. You can pass events externally, or even nest the dialogue directly inside of the DRS tool itself, and see the execution order of your events in real-time.

The Dynamic Response System is explained in the written tutorial below, and also in the video master class embedded here. It covers how to execute various events through dialog and overall gameplay.

In this tutorial, you will learn to set up a simple scenario and to use the basic Dynamic Response System (DRS) functions.

We are going to set up a small scene where a Non-Player Character (NPC) comments on the action of a player triggered by pressing a key on the keyboard. This will send a DRS signal via a simple Flow Graph script.

We will add a Response to a signal in the DRS widget and then add a SpeakLine action to this Response so that we can actually get a dialog feedback. After completing these steps, you will iterate on the scenario by adding a Condition to the Response and debugging your data.

Please note that in this section, the GameSDK Sample Project is used. The assets in this Tutorial can be accessed only if it is downloaded. Please visit the Marketplace to download the GameSDK project.

The Dynamic Response System is event driven; therefore, it only reacts to signals that are sent to the system. In this example, the signal is sent via a Flow Graph script, but it could also come from code, script or any other part of the game logic. For more information about Flow Graph and it's functions, please refer to the Flow Graph section.

After this step, whenever the designated key (g) is pressed, a signal will be sent to the NPC. However, you won’t get any response from the entity since no Response has been linked to the signal yet.

For linking a Response to a signal, please go through the next step.

You can create a new Response by executing either one of the following methods:

The DRS tool combines multiple functionalities, such as:

The DRS workflow requires the user to utilize different options on the main tabs of the tool to modify the various aspects of a dialog flow.

The Responses panel can be accessed by clicking the respective tab on the bottom-left corner of the panel:

You can view the recent signals by selecting the Recent button on the top-left corner of the Signals panel. It reveals the list of all signals sent by the game so far. 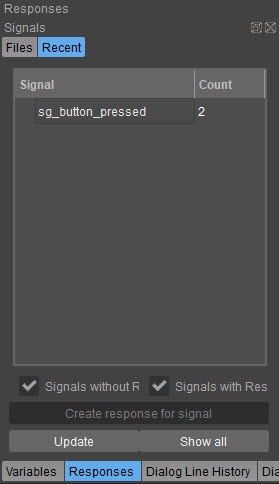 If this list is empty, make sure the game is running and you pressed the key that you specified in Flow Graph at least a couple of times. The list is not updated automatically, so you need to press the Update button at the bottom left of the window. If your signal does not show up in the list, check the initial Flow Graph setup and use the debug functionality to see if the DynamicResponse:SendSignal node is executed correctly.

New Responses will be saved in YOUR_PROJECT_FOLDER\Assets\libs\DynamicResponseSystem\Responses. If it's not available already, you need to create a project folder to save your responses. Within this folder, you can create sub-folders and move your .response files into them to keep the responses sorted. Make sure you do not end up with multiple response files for the same signal name.

With the current setup, the Response should have already been executed for each time the sg_button_pressed signal is sent by the game. But the response currently does nothing, so you won’t be able to notice it. Executing a response usually comprises of three functions that are outlined below:

For adding an Action to a Response, please continue to the following step.

Step 3: Adding an Action to a Response

This step explains the process of adding an Action to a DRS Response.

Please ignore the Missing indication for now as it only appears to notify the user that a dialog line has not been specified in the dialog line database that is being used. How to fix this issue will be explained later in this tutorial.
If the outcome of this setting looks different, it might be useful to open the DRS widget again and to take a look on the right side of the Response tab. This window displays the execution history for the currently selected signal(s). It displays when the signal was executed, Conditions that were checked, the outcome for the Conditions (true/false) and the Actions that were executed. For more information about this widget, please see the Execution Info section.

Now that an Action is assigned to the Response, you can add a Condition as mentioned in the next step.

Step 4: Adding a Condition to a Response

In this step, you will learn about adding a Condition to a Response and modifying it.

As you can see in the image, the SpeakLine action was only executed the second time the Response was triggered. This is because when the assigned key was pressed for the first time, the Random condition was not met due to the 50 Probability value.

After adding a Condition and an Action to the Response, you can now follow the steps explained in the next section to learn how to add a dialog line to the Response.

This tutorial explains how to add a dialog line to the Dialog Line database.

As mentioned in Step 3, a warning appears when the assigned key is pressed. This is because the line that you are referring to in the SpeakLine action is not available in the Dialog Line Database yet. Instead of specifying all properties that are needed for the text line in the SpeakLine action, you can just use the line ID in the Dialog Line Database. The database then holds all information for that line such as subtitles, audio assets, and animations. This is particularly helpful when grouping the actual data together, instead of splitting it into several Actions. It also helps later on with localization.