This page will cover the 3dsMax pipeline for getting vegetation assets with touch bending into CRYENGINE. 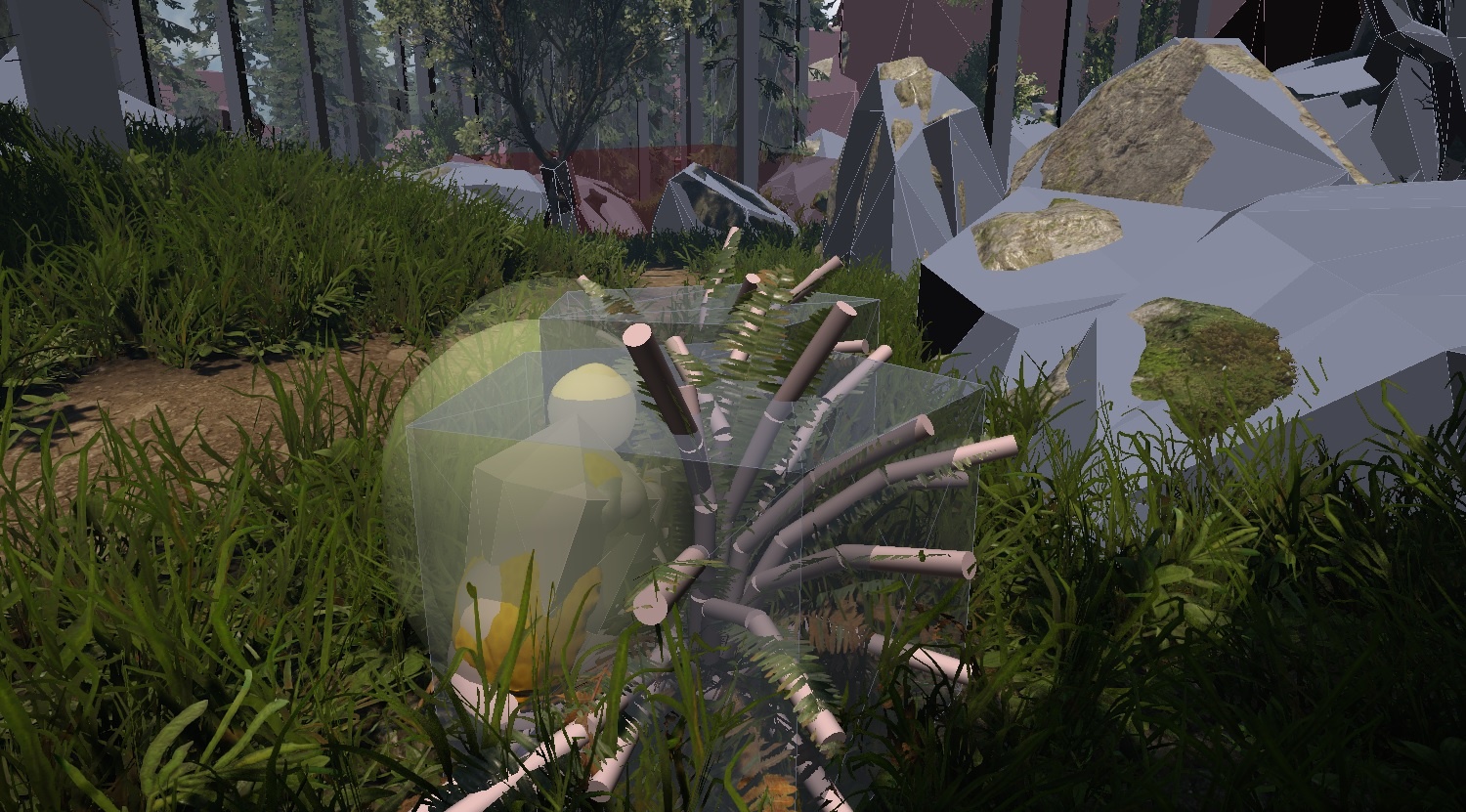 Before you continue with this tutorial, make sure to have read and understood the following;

Make sure to keep the following things in mind while you work on your asset:

For this tutorial, we will be creating our asset in the following directory.

To begin with, we save our 3dsMax scene to this location. All our exported assets will be saved in there. Some of the textures that we use comes from an existing asset and the location of the existing asset will be provided later in the tutorial.

We will continue with the assumption that you have already created the asset, since this is not a 3dsMax modeling tutorial. We will begin with preparing the asset ready for CRYENGINE, assigning SubIds to the relevant polygons and configuring the material. 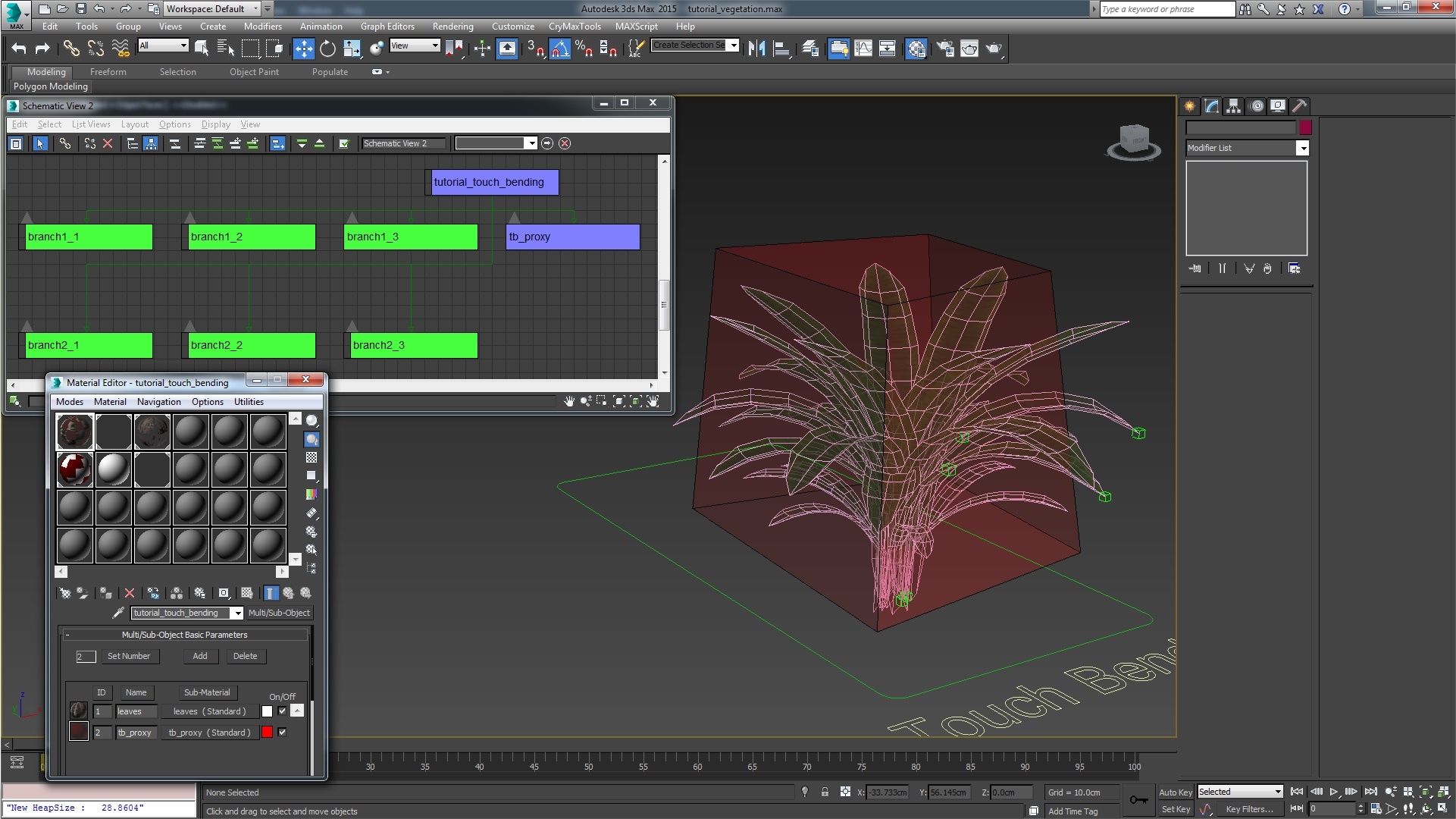 Pic2: 3dsMax overview of the finished model including the visible and no-collide mesh

First, we will configure the material for the object. In 3dsMax, open the Material Editor. Create a new multi-material called tutorial_touch_bending, with two sub-materials. Name the first SubId leaves and the second one tb_proxy (tb = Touch Bending). The names of the SubIds are not important here. Just name them something specific to their purpose for your reference. See Pic2 and note the multi-material setup in the 3dsMax material editor.

The example file refers to the following textures already provided within the build: 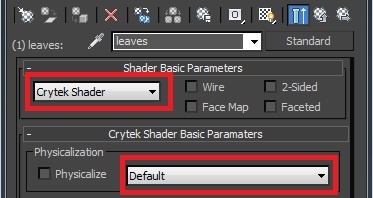 In the Shader Basic Parameters:

Open the tb_proxy sub-material (SubId2). This material will be used for the no-collide volume and defines the properties for this object. The no-collide parameter notifies the physics system on the geometry (detects if the player is within the boundary) to activate the Touch Bending system.

Unlike the other physicalization option that you are familiar with, Physical Proxy (No Collide), this does not block the player, it detects if something is inside. 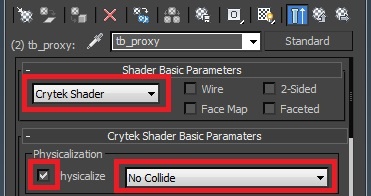 In the Shader Basic Parameters section:

In the Crytek Shader Basic Parameters section, set the diffuse color to red and reduce the opacity to 15 - 30%. This is not required, but helps the user to quickly identify the proxy geometry within the asset.

Now we have configured the material for the object with two SubIds, one for the visible part of the material (leaves) and another to control the activation of the Touch Bending (tb_proxy). 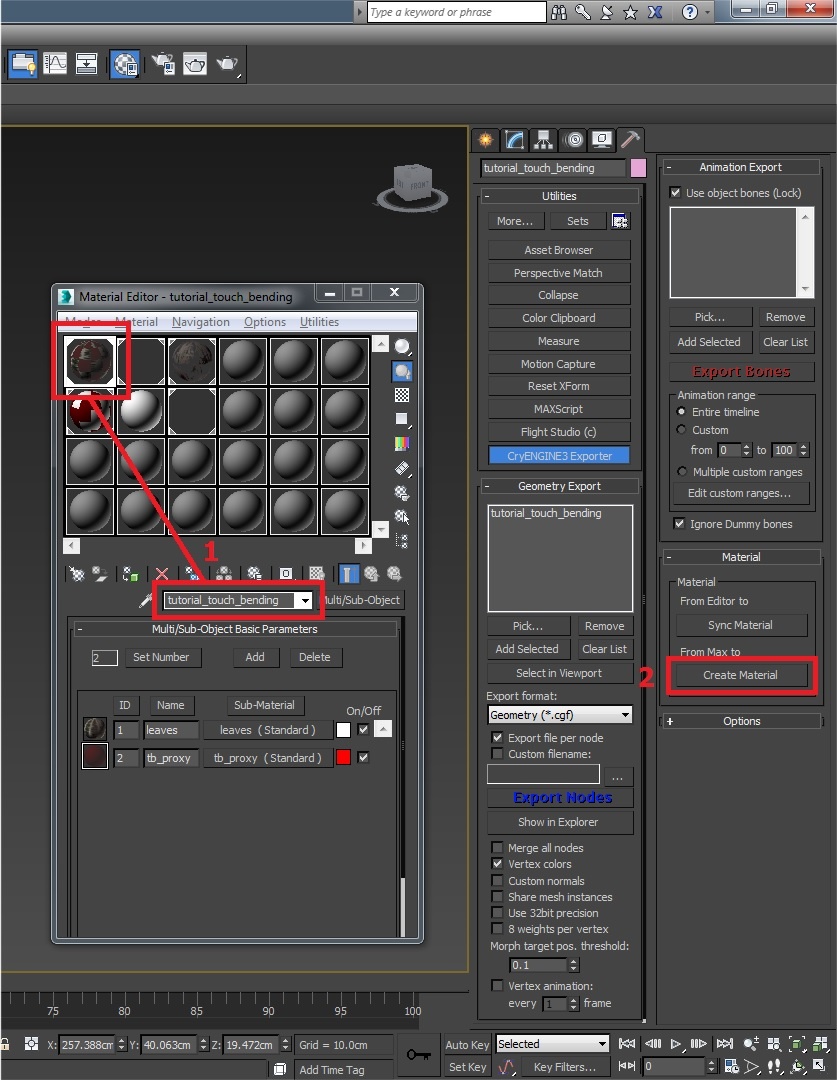 Pic5: Selecting the correct material for the texture export

Our geometry for this tutorial is going to be a fern bush. This plant is perfect for explaining this type of technology. Create a single big leaf mesh for your fern bush and apply the material we just created to it (tutorial_touch_bending.mtl). Change its material SubId to 1 (leaves). Finally use the Unwrap UVW modifier to adjust its UV shell to only fit around one of the leaves on the texture. 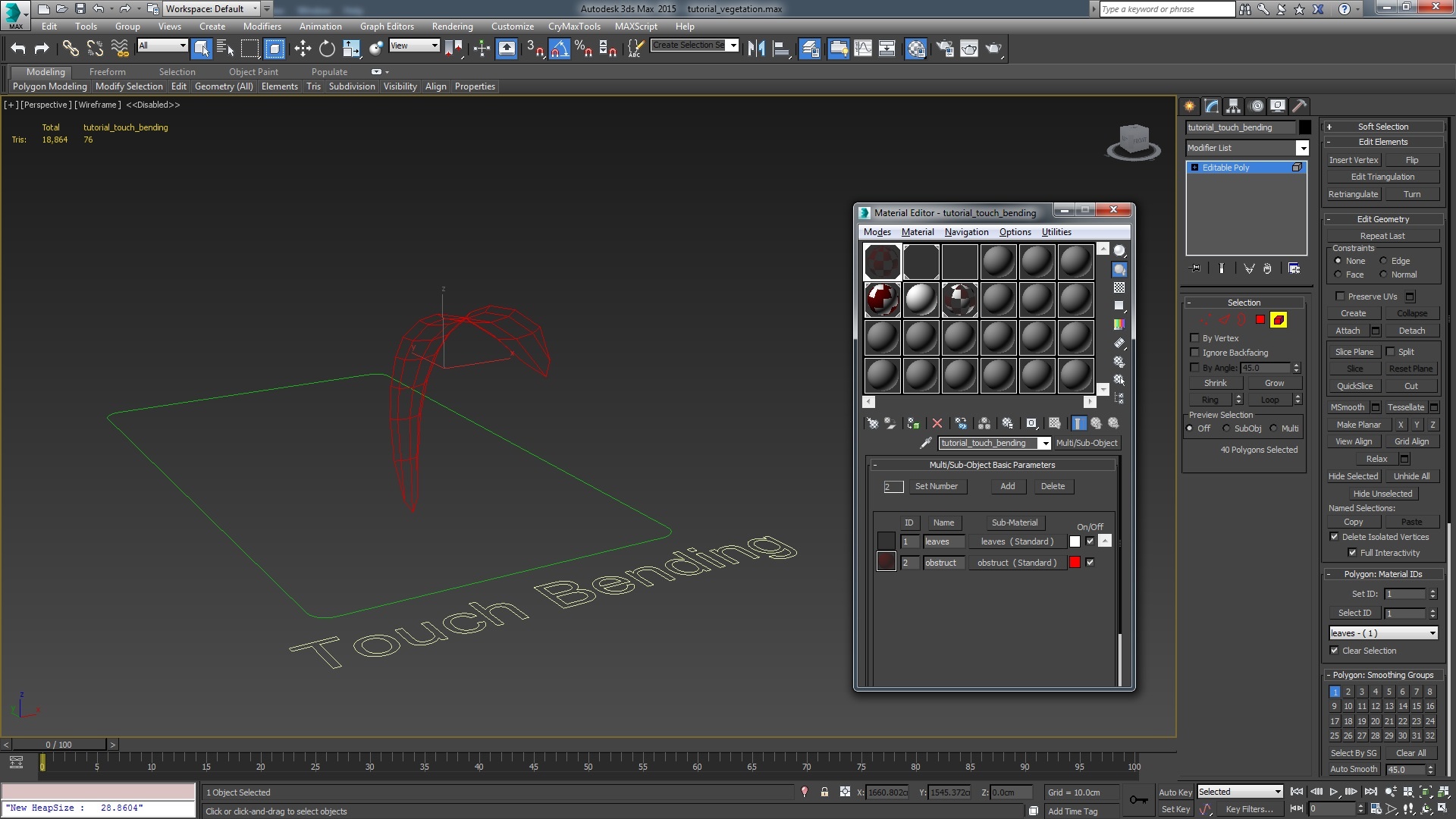 Pic6: Geometry of one leaf of the bush 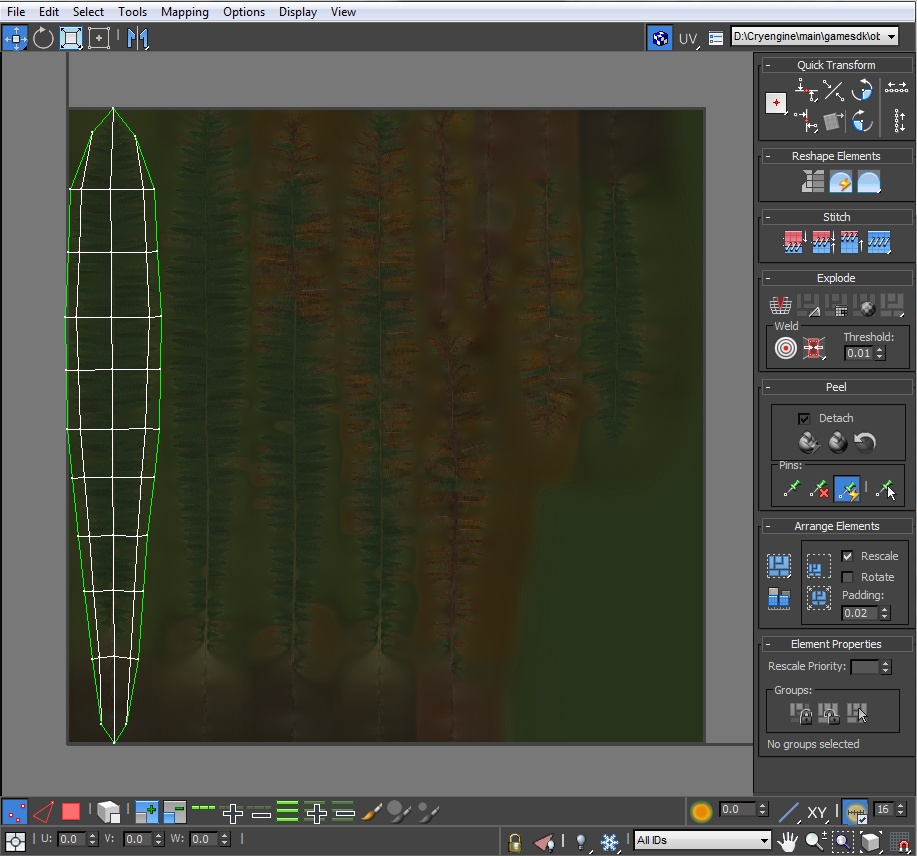 Pic7: UV Layout of the leaf in 3dsMax. Note the leaf UVs matching the underlying texture

Before we continue creating the rest of the plant by duplicating this leaf over and over, we will add on our helper dummy objects to the geometry. You can also add the dummy helpers at the end once the bush geometry is complete. 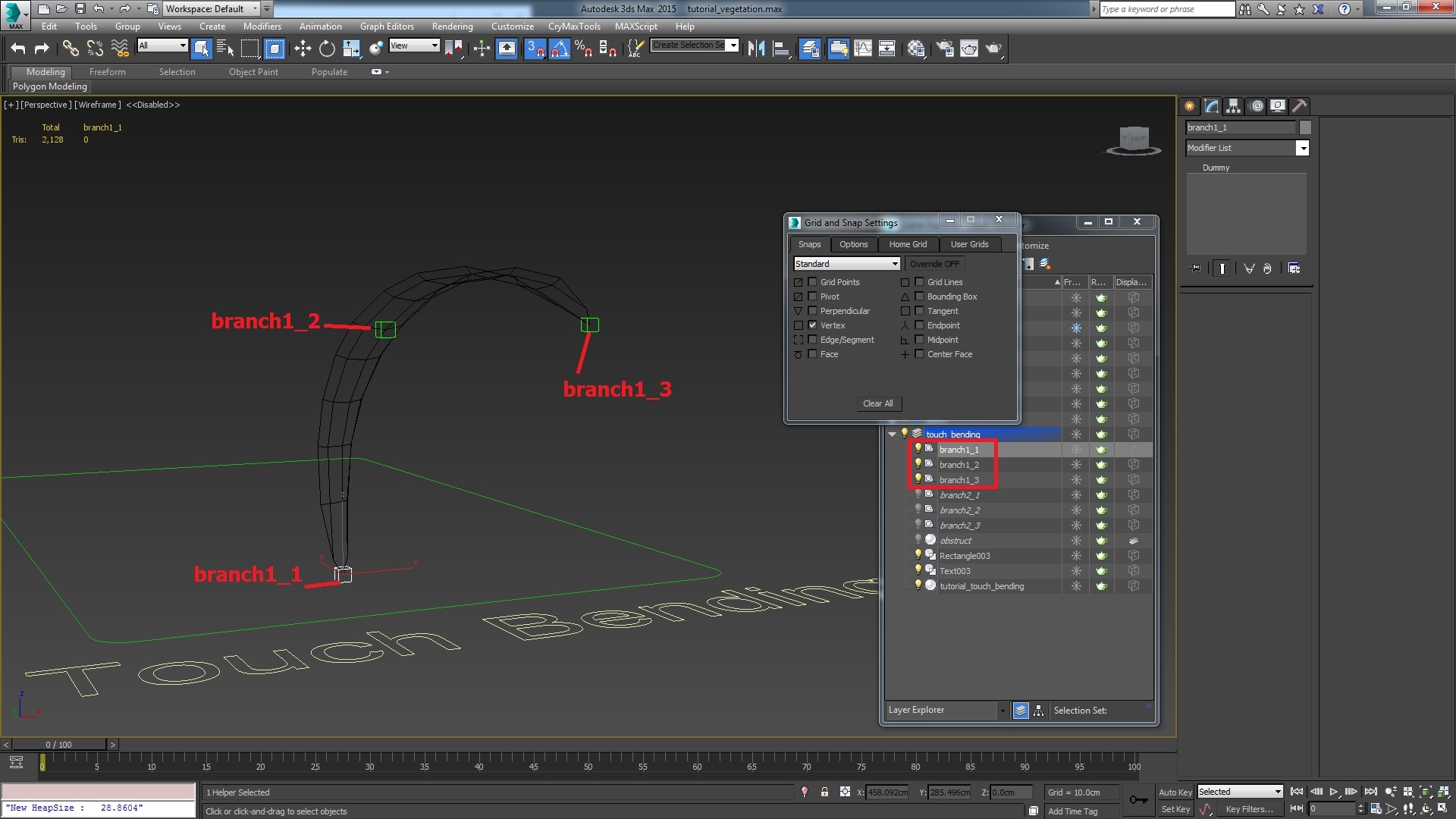 As mentioned above, three dummy helpers are enough to control touch bending on 99% of all cases. One for the base, one roughly in the middle and finally one at the tip of the leaf.

When adding them, make sure you snap the dummy to a vertex.

Branch1 (the prefix to all the above) denotes that this is the Branch Name. The _1, _2, _3 are children of the branch.

A vegetation object can support multiple branches. To differentiate the working of the next branch, we increment the Branch Number. The next set of helpers for the second branch is as follows:

As before, Branch2 (the prefix to all the above), denotes that this is the Branch Name. The _1, _2, _3 are children of the branch.

Linking the Dummies to the Parent Object

The dummies are simply linked directly to the parent node (the geometry in this case).

Duplicate the Leaf to Build the Bush

With the leaf selected in element edit mode; detach and make a clone of the geometry. Use the rotate, position and scale tools to add variation to the structure of the bush. Repeat enough times to make the object look realistic. 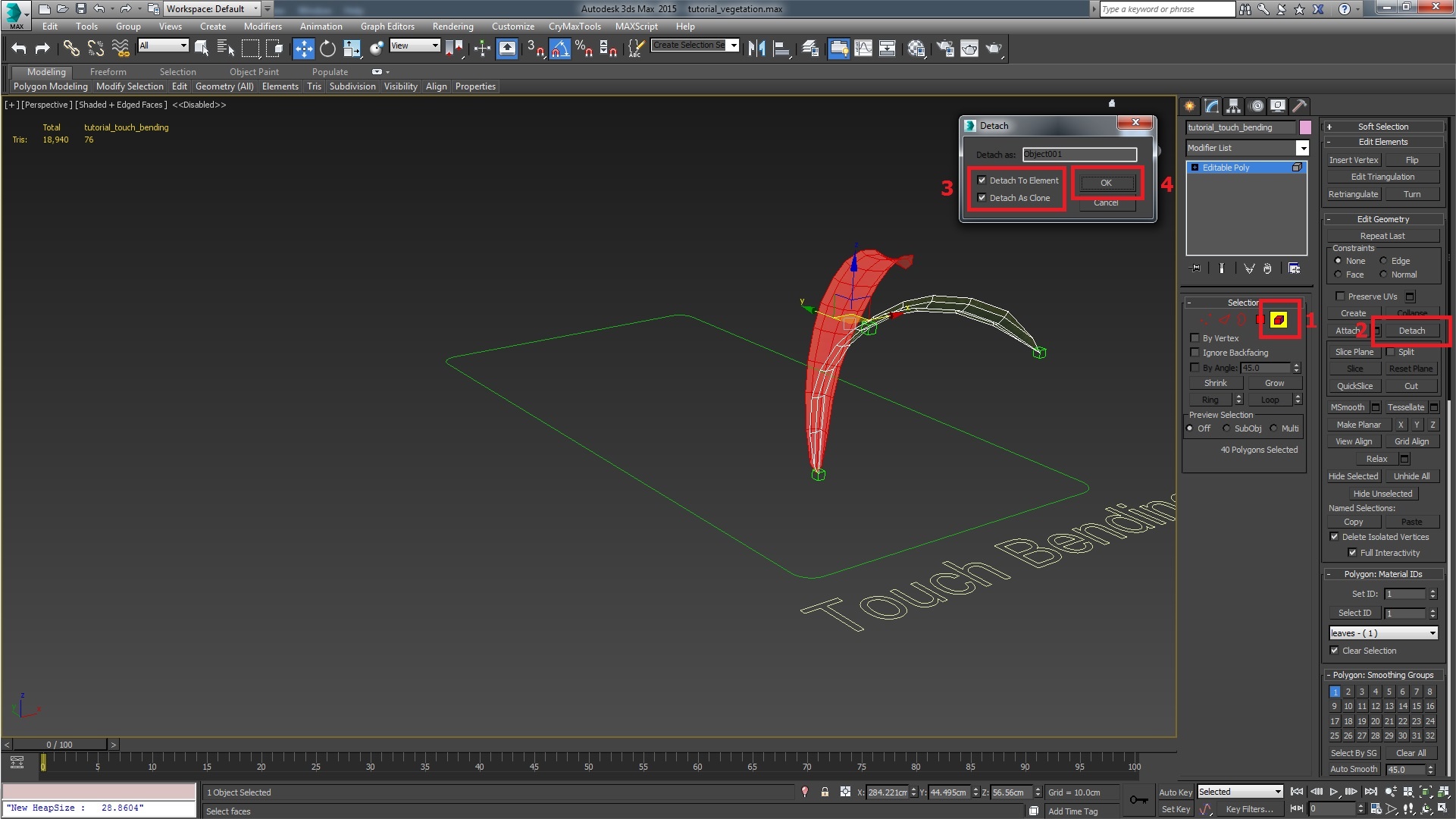 Pic10: Cloning the leaf geometry to make another copy using the "Detach" tool

Follow the below steps to clone the leaf geometry using the Detach tool: 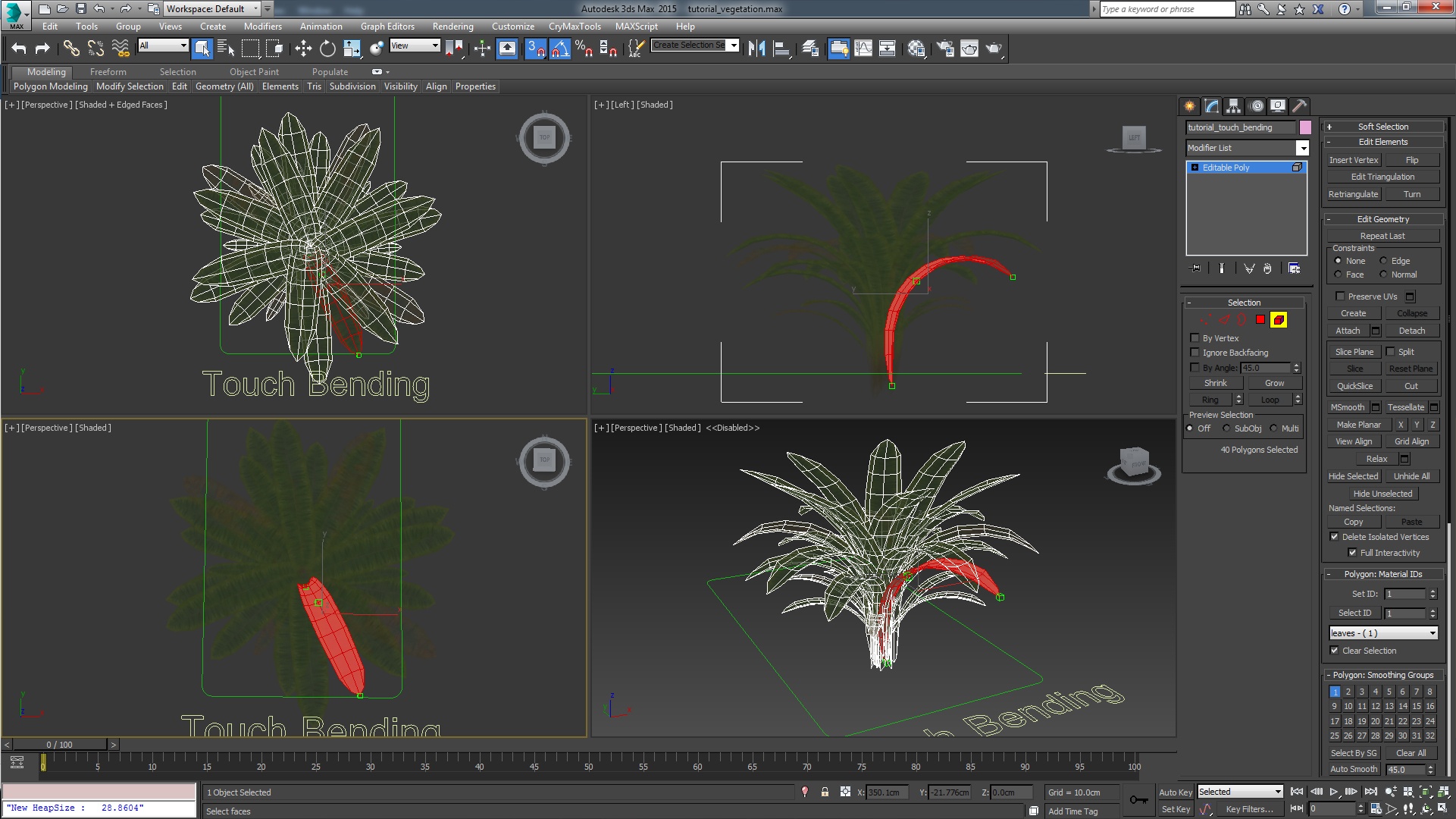 After repeating the above process several times to fill out the bush geometry, you should have a fern bush looking similar to the above picture.

Notice how we did not copy the branch setup. Only the polygons of the leaf were duplicated and re-positioned. You should still only have one Branch1_* chain in your bush asset.

Going back into the Unwrap UVW modifier of the object, we will notice that all the UVs for all the multiple leaves we created are overlaid on top each other.

Since we only created 1 bone chain (Branch1_*) but the UV layout of all the copied geometry is in exactly the same space, the other leaves inherit the the bone chain setups since the UV coordinates share the same UV space. 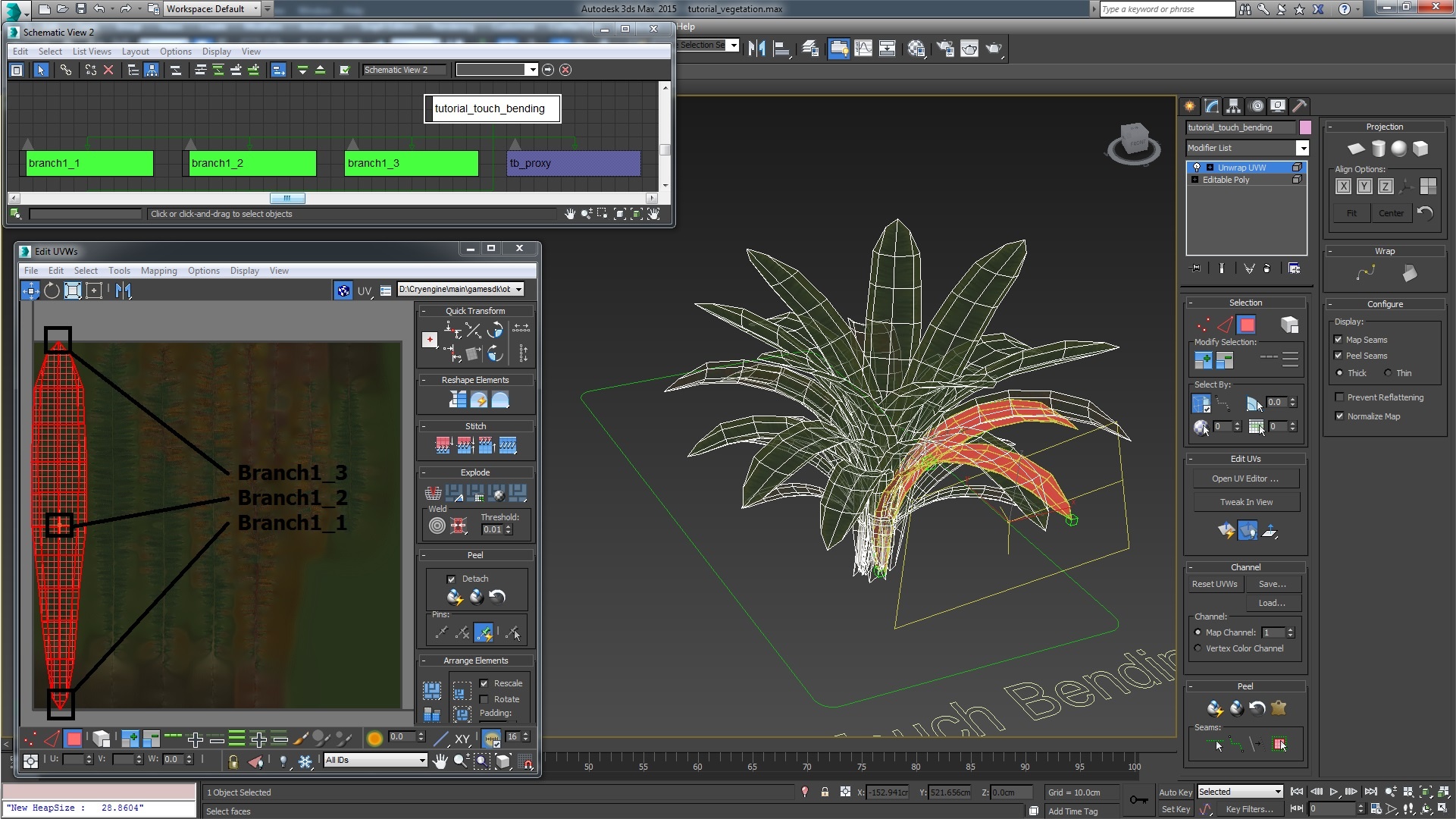 Pic12: Overview of the 3dsMax setup

Things to note in the above picture:

The engine considers copies of your leaf as instances while they are part of the whole object. Through instancing, all elements with the same UV shell gets the same bone setup as the source leaf with its dummy branch setup.
CRYENGINE looks for all dummies and the vertices they are snapped onto. It then marks the UV coordinates of those vertices. Each additional geometry element with its own UV shell gets instanced as soon as parts of it cover those marked UV space locations.

Adding Variation to the Leaves Geometry

As we just stated, so long as all the UV shells share the same space on the UV layout, they will inherit the branch setup associated with the first leaf we created.

At the moment every leaf element is of the same size, but with different positions and rotations applied to them. We have the option to also scale the geometry, remove faces safely and apply deformation modifiers to the leaf as well, while still preserving the dummy branch setup.

If we do not change the UV layout between different leaf elements, we can still change the shape of the individual leaves.

In the above picture on the left we can see all the UV shells stacked on top of each other in the UV layout. On the right side of the image we have the 3dsMax viewport. Below is a quick description of the numbered leaves:

Even with all these different modifications that we have applied to the leaves, they will still inherit the Branch setup and be will active for Touch Bending. This is due to the fact that we did not change the UV layout of the geometry but just changed the shape of it.

So while applying this technique, do not modify the object with extreme geometry modifications. Keep in mind that you can not change the UVs.

In the examples above, we are using some very extreme cases where the stretching is very obvious. This is just to show that changes can be made and still will be able to work with the branch setup.

But if you change the UV layout to make the correct 1 to 1 ratio for the texture, you will break the touch bending setup because the new leaf will not be in the same position as the original leaf.

If you completely break the leaves geometry (remove all the polygons in the middle) to make 2 separate UV islands, it will also break the touch bending for that leaf. 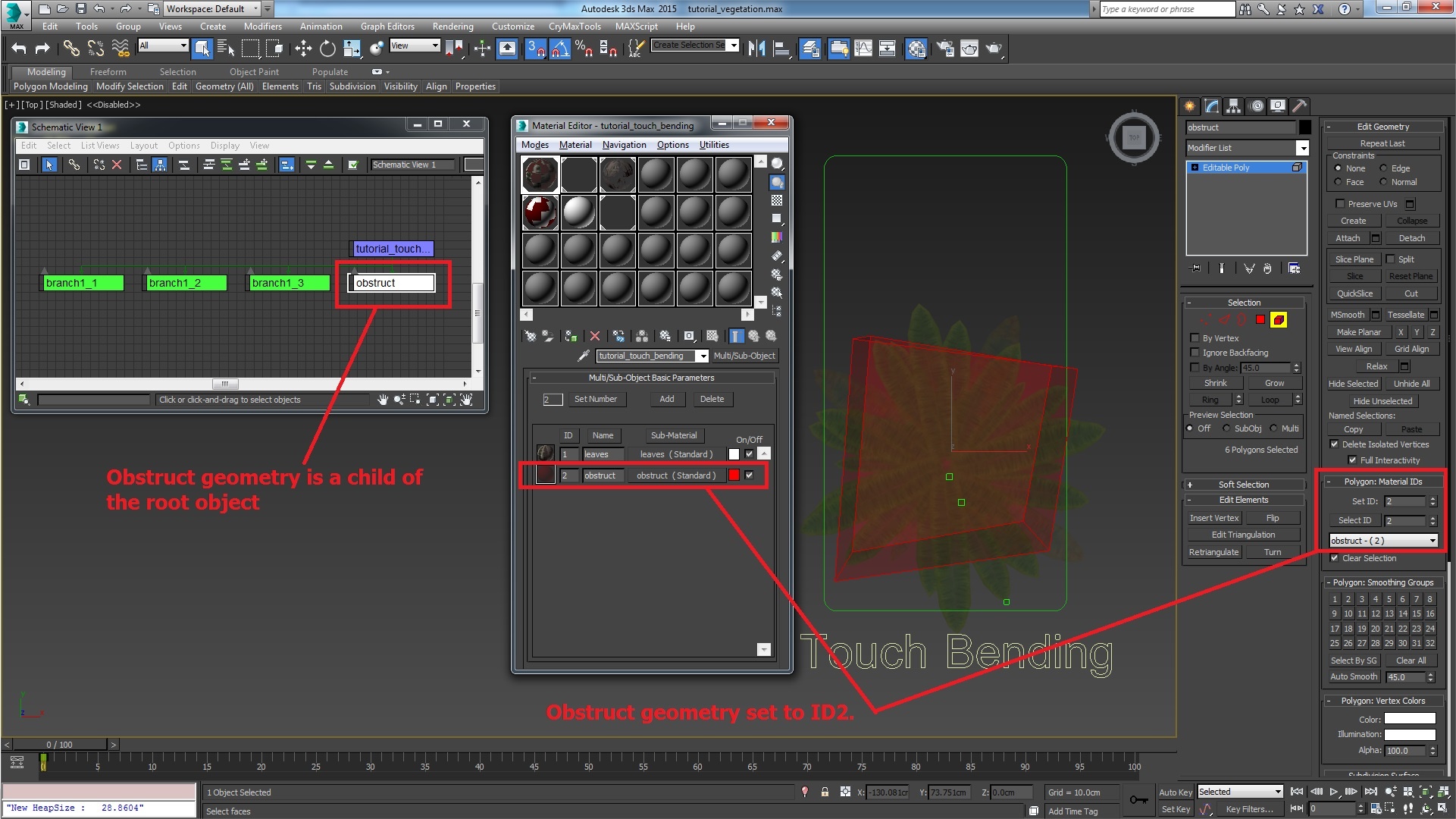 Pic15: Setting the tb_proxy to use SubId2

In the above picture, note how the tb_proxy geometry does not completely covers the leaves. This is an optimization where we allow the player to get close to the bush without activating the leaves with touch bending.

Remember that the player has to enter the tb_proxy to activate the touch bending. This isn't a required step, it's optional, but in our practice we found this to be the optimal setup in the asset creation.

To help the bush fit into the scene when we add the vegetation object to a level, it is recommended to move the pivot up slightly so the base of the plant (actually sits underneath the terrain). This avoids the possibility of seeing the bottom of the bush hovering in the air. 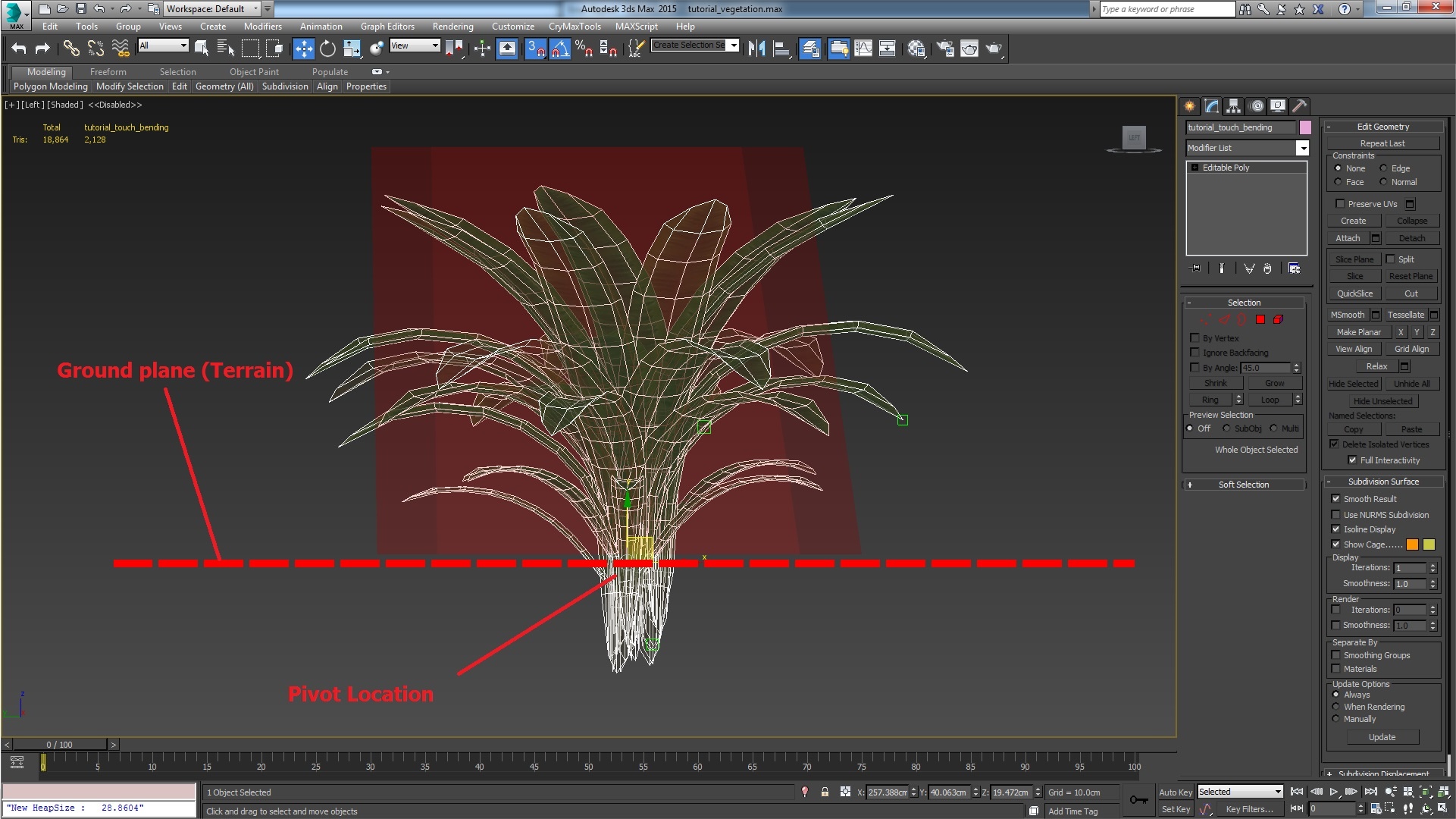 Pic16: Adjusting the pivot to sit higher in the asset

When you need an additional, different looking leaf by covering its UV shell on one of the other leaves in the texture, you can apply an additional six variations on this one texture. 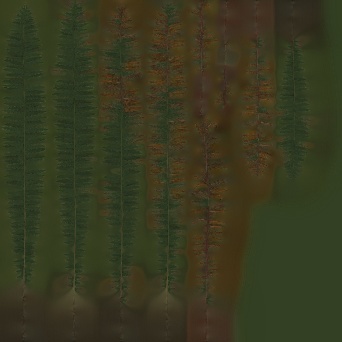 In doing this we are breaking the link between the dummies and the vertices in these leaves by moving the UV location. These will not be part of the Branch1_* bone setup. 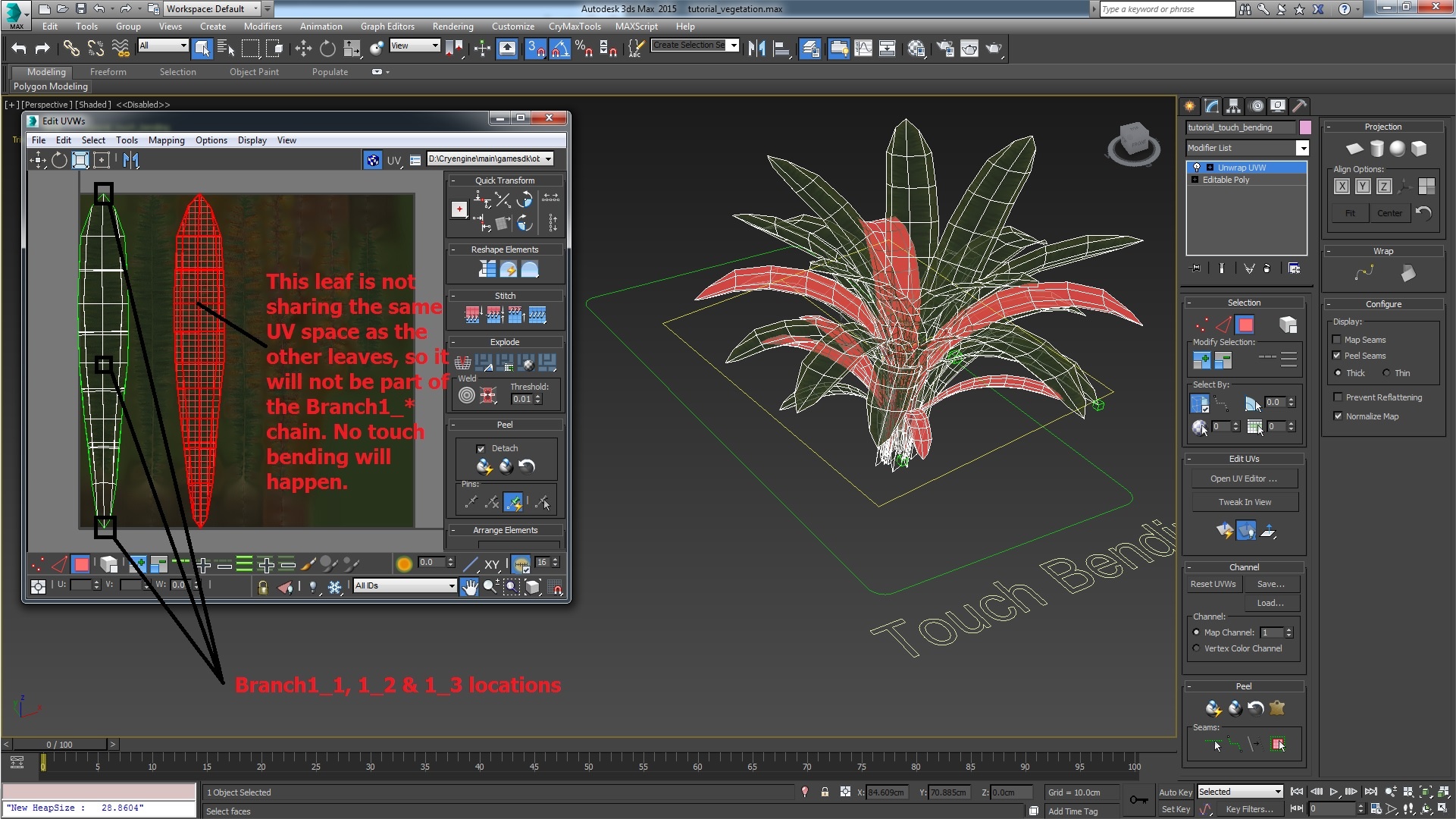 Pic18: Moving the UV shells of some of the leaves to a new location on the texture

Now the leaves are aligned in a new position, we want these leaves to benefit from the touch bending system. To do this we have to setup another Branch. Lets repeat the process we did before to create the bone chain but this time it will be called Branch2_*.

Select one of the leaves that is in the new location on the UV layout, and hide all other geometry (only have one visible to make the positioning of the dummies easier). Position the branch dummies in the same areas, one at the base (Branch2_1), middle (Branch2_2) and top (Branch2_3) and make sure to vertex snap them to a local vertex. 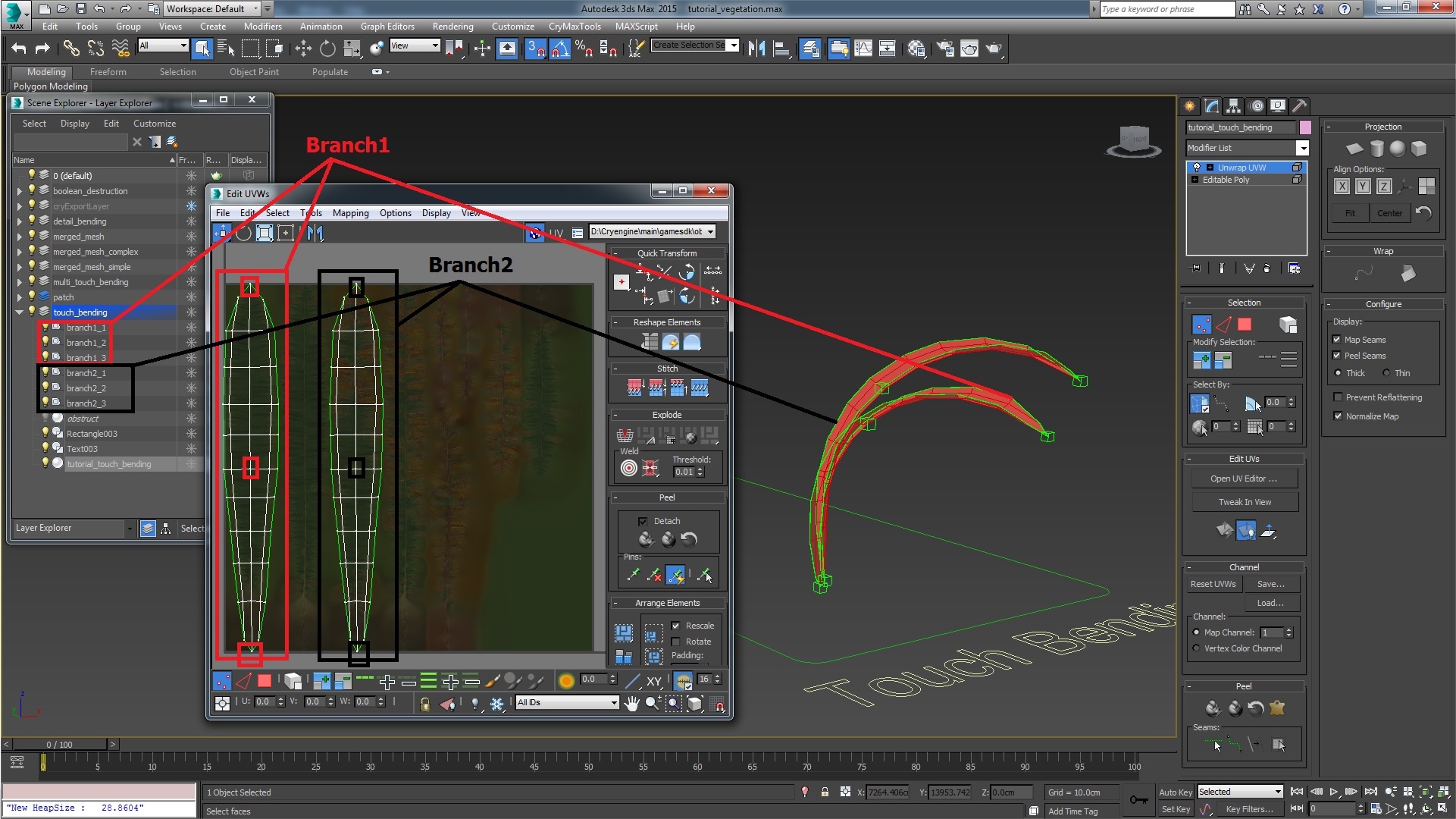 As a further optimization within the bush asset, not every leaf should be associated with a branch. So far in our asset we have 2 separate bone chains (Branch1_* and Branch2_*). All of the leaves are currently setup to have touch bending enabled from either one of these two branches.

Try to keep the non-physicalized leaves closer to the ground so their non-interactivity is hidden under the physicalized ones. This way it's less noticeable. 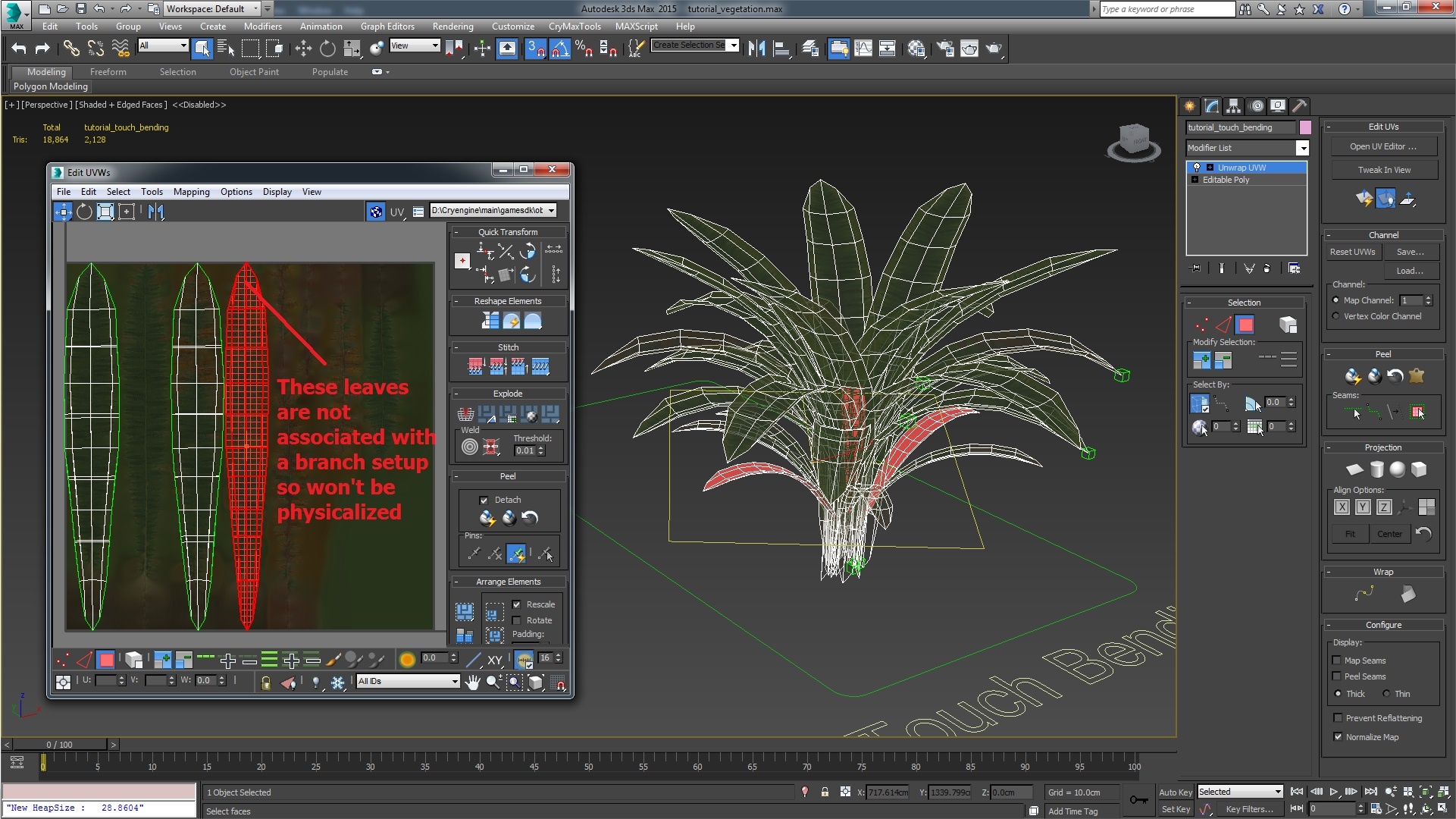 Pic20: 3 leaf variations, branch1_*, branch2_* and a third set that is not associated with a branch

We are now ready to export our geometry to the engine. In the CRYENGINE exporter: 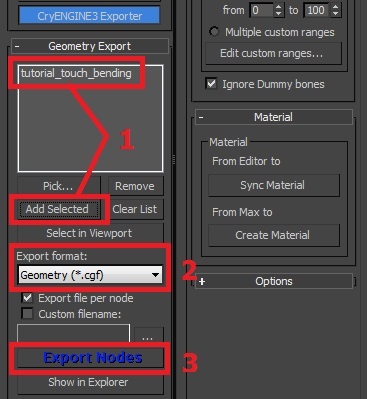 Pic21: Adding the asset to the exporter

We have now finished the setup for the 3dsMax portion of the tutorial. To continue, move to the next page where we configure the material and use the Vegetation Tool to place down some of these touch bending assets.