This tutorial will guide you through the initial steps in getting your audio from Wwise to work in CRYENGINE using the audio system.

Initial Steps with Wwise for CRYENGINE

Setting up Wwise for CRYENGINE

Enable the Wwise middleware in CRYENGINE's Console by setting the s_ImplName CVar to CryAudioImplWwise. As an alternative add following line to your system.cfg or user.cfg file (located in the root folder of the CRYENGINE):
s_ImplName = CryAudioImplWwise

When using Wwise with CRYENGINE, you can locate the Wwise specific data in the following locations:

You can select a different path for your Wwise project by going to Edit -> Preferences in the Audio Controls Editor. You can then type the desired path or browse for the folder with the Browse button:

By default, CRYENGINE checks these folders to locate all the Wwise Controls and Soundbanks and displays those files in the Audio Controls Editor.

It is recommended that you maintain the default folder structure since .bat files in the CrytekScripts folder would need to get updated as well. 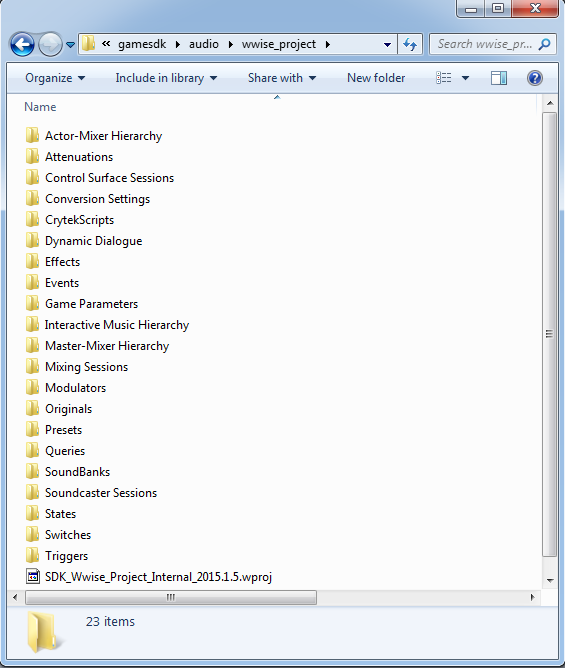 When you ship your game, make sure you include the Soundbanks in the game folder as they contain all data from the Wwise project.

To make sure that you are using the correct version, open the Console in CRYENGINE, and then type s_DrawAudioDebug a. Now, you can see (in the top left hand corner) the current version of Wwise that is supported by the audio system in your CRYENGINE build.

Creating an Audio Setup for CRYENGINE in Wwise

If you are new to Wwise, it is recommend that you read Audiokinetics Wwise Get Started Guide. This will help you to get familiar with the concepts of the Wwise software. You can also complete the basic Wwise 101 course that is available here.

Creating a Sound Object in Wwise

In Wwise, you can import sounds into the Actor-Mixer Hierarchy by dragging or dropping the audio files or by using the Import function (Project -> Import Audio Files).
After you have imported an audio file in .wav format, Wwise will create a new sound object for it. 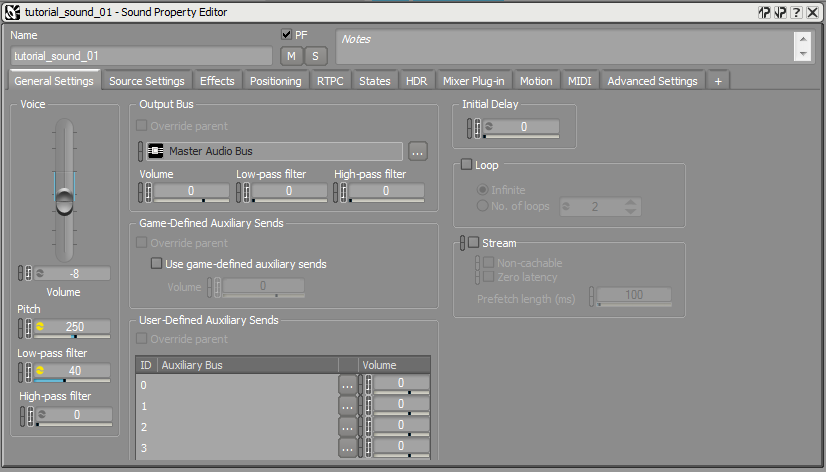 In the Property Editor, you can change parameters such as volume, pitch, low/high-pass filtering, routing and positioning of the sound SFX object.

Creating an Event in Wwise

In order to make your imported sound visible to CRYENGINE's audio system, an event needs to be created for it within Wwise. These events can perform multiple actions; the most basic and often used is the Play-Action which plays back an object from the Actor-Mixer Hierarchy.
To create an event for your sound object, right-click on the sound object in the Actor-Mixer-Hierarchy, and then select New Event -> Play.

If you now look in the Events tab of the Project Explorer window, you can see your newly created event.

It is recommended that you use prefixes for events as they can perform multiple actions. For example, when stopping a sound, events can be called as Stop_(...) and so on in order to enhance their readability in both Wwise and CRYENGINE.

Creating a Soundbank in Wwise

To integrate the new event into your game, you will now have to create a Soundbank in Wwise that can be loaded by CRYENGINE. In Wwise, open the Soundbank tab and click the Create new SoundBank button to create a new bank.

Remember that the SoundBanks need to be located in <ProjectFolder>/assets/audio/wwise in order to be visible to the Audio Controls Editor.

You can set up Wwise to automatically generate the SoundBanks in the correct location by entering ../wwise/ as the path under Project Settings -> SoundBanks.
This will generate all Soundbanks in the location <ProjectFolder>/assets/audio/wwise when your wwise_project is correctly located in <ProjectFolder>/assets/audio/wwise_project.

Now the Audio Controls Editor displays all Wwise Controls contained in your Wwise Project as well as your generated SoundBanks. You can now connect them to the audio system in order to integrate them into your level in CRYENGINE.

You need to create a new folder in the Audio Controls Editor by selecting the +Add drop-down menu and then select Folder from the list.

You may notice that two types of audio system Controls have been created, a Trigger and a Preload.

CRYENGINE requires the Wwise Soundbank containing your event data to be loaded in order to play the audio sound in your level. Therefore, make sure to connect your Wwise SoundBanks to Preloads and update them when you add new content in Wwise.
For more information on creating Soundbanks in Wwise, please refer here.

In the audio system Preload, make sure that the Auto-Load checkbox is activated and leave the Context on Global for now. For more information on using Contexts in the Audio Controls Editor, please refer here.

In order to play your sound in the game, you need to place an audio entity in the level which will be executing the Audio Trigger during the game play. For each level, it is recommended to create a dedicated Audio Layer which contains all your audio data. You need to add a new layer in the Level Explorer and name it Audio.

For more information on the functionality of the Audio Trigger Spot in combination with Wwise, please refer here.