Custom Tests in the Test Runner

CryTest is a feature-testing framework aiming for large and complex test cases in CRYENGINE.

Feature tests can be written in-place along with code being tested, or in a separate source file. The basic interfaces are defined in the CryTest.h header. Under the hood, test instances are global variables that auto-register themselves, meaning they should only be in .cpp files and not headers.

Simple tests are those that complete the test within a function call. Defining a simple test is as easy as putting all the routines inside a CRY_TEST function scope. When the test framework executes the test, it blocks the main thread until the test is finished; calling a time-consuming function from the test is still possible, but the engine - the game or the editor - would be blocked during that time.

The key concept of feature testing is first waiting for other parts of the program to update their states and afterwards, examining these states. To do this without any blockage, test commands for a feature test can be queued instead of executing these commands right away.

A command represents a piece of work that may take time to update itself or listen to other event changes.

A minimalistic example is as follows:

Commands are a collection of CCommand, i.e. the base type of any command. CCommand is not a base class of those commands, but instead it is the type-erased container of any class implementing these methods:

Note that only the function Update() is required, whereas GetSubCommands() can be omitted if unnecessary.

Note that the waiting time here refers to the engine main loop time, which occasionally can differ from the real time due to blocking and spikes.

The same test in the aforementioned example can be extended with some important attributes that denote when and where the test should be executed.

Attributes are actually the members of the class CTestFactory; jump to the symbol from the attribute name to learn more about it.

Currently, there are 4 ways to execute tests for a local engine build.

The first option is to run the targets directly on a CryEngine solution that is either of the game project or the Sandbox itself.

Start a new debugging instance or set it as startup project to run. It internally starts the game launcher with the command line parameter, run_unit_tests.

Likewise, there is a test batch file for the game and the Sandbox for each platform, which can be found in Tools\Tests\Test_RunUnitTests_*.cmd. 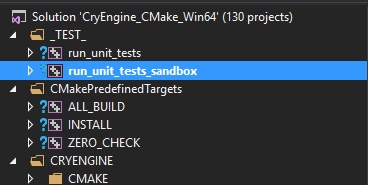 Running tests from the solution explorer

The preferred way to run tests for the game developers should be the Test Runner tool which can be found in the Sandbox menu, on Tools → Advanced → Test Runner.

With the Test Runner you can:

Note that when a test crashes or hangs, it inevitably crashes or hangs the Sandbox as well. It is recommended to write the test code "defensively", i.e. check for nulls. 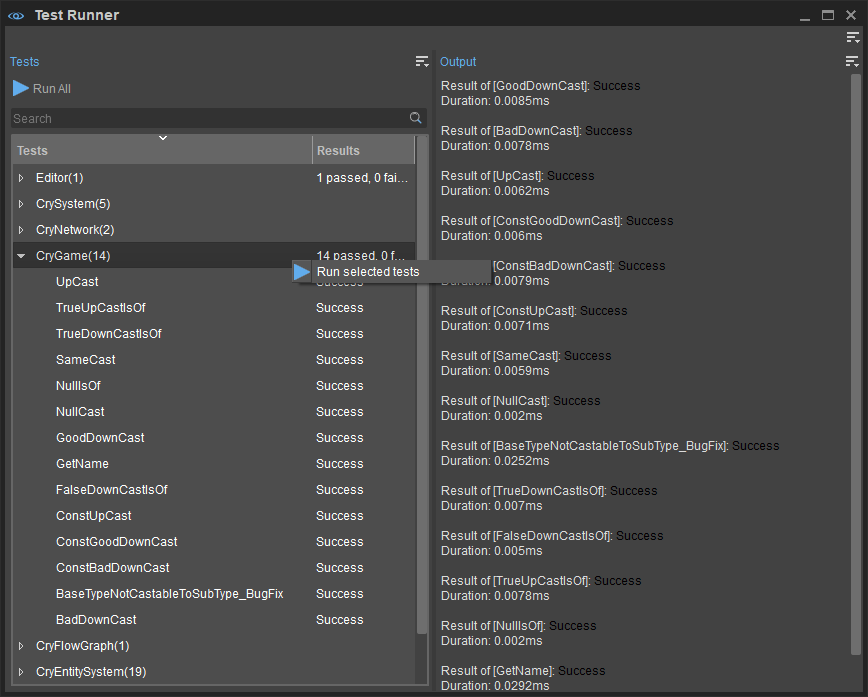 The last option is to use the console command CryTest on the in-game console or the editor console.

The command supports auto complete, meaning if you press Tab after CryTest, it's going to display a list of valid test cases.