In this short tutorial we'll show you how to add a simple selector to the Singleplayer menu which will allow users to specify the game difficulty.

Step 1 is of course to open up the Sandbox Editor and open up flowgraph to access the UIActions.

The graph you want is UIActions -> MM_PagesMain -> MM_SinglePlayer. This is the screen that is shown when clicking on the "Singleplayer" option from the main menu. 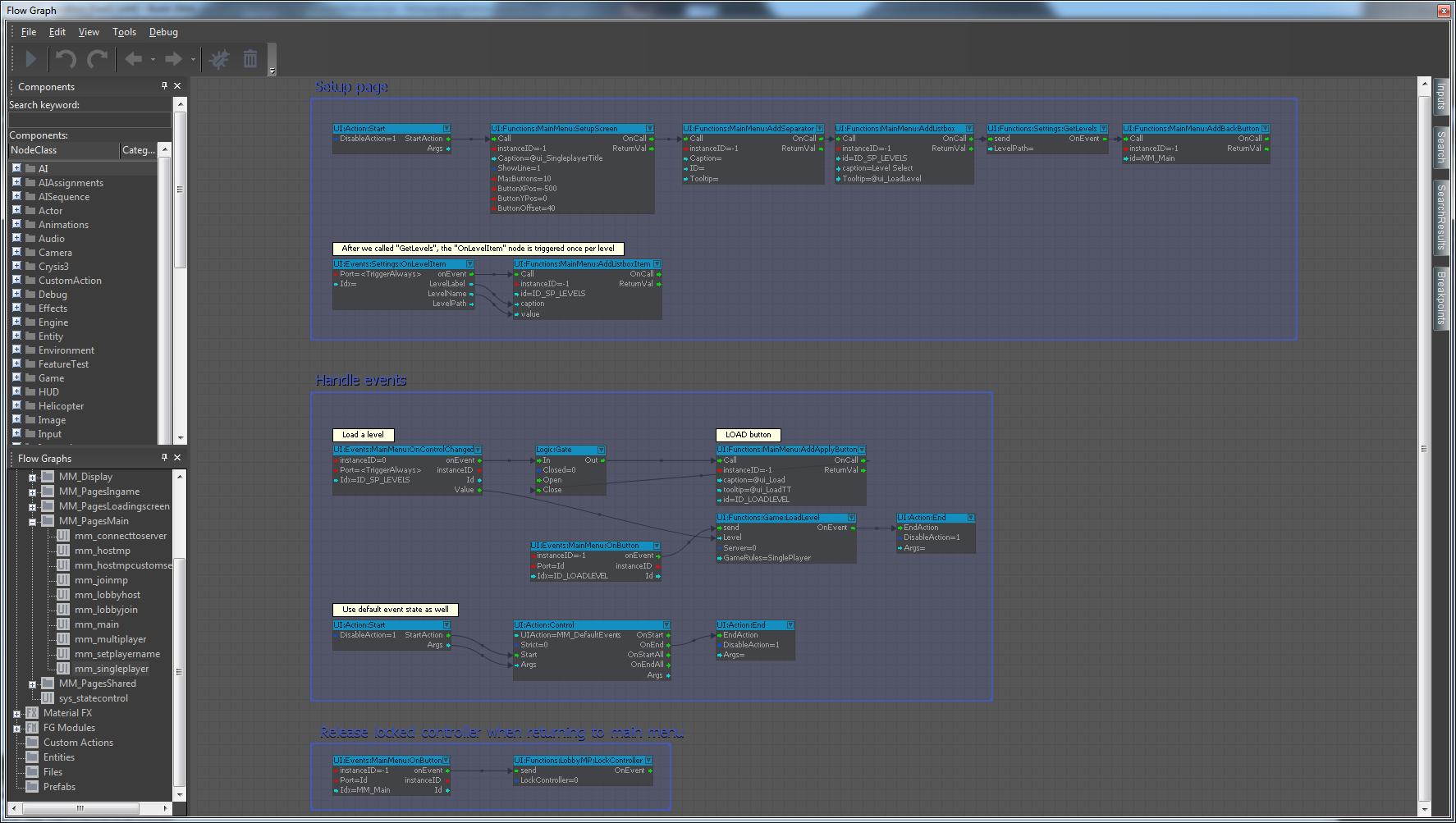 Now we want to add some switches that the user will interact with.

We also know that we're going to have 5 difficulty options available, so add 5 UI:Functions:MainMenu:AddSwitchOption nodes.

As the names indicate, a SwitchOption is an 'option' that is given for use with the Switch node, so you have one switch and five options for that switch.

The recommended layout is to put your Switch at the top and then in a vertical fashion, list your Options below the switch.

Just slot your new elements in the chain where it makes logical sense, something like this: 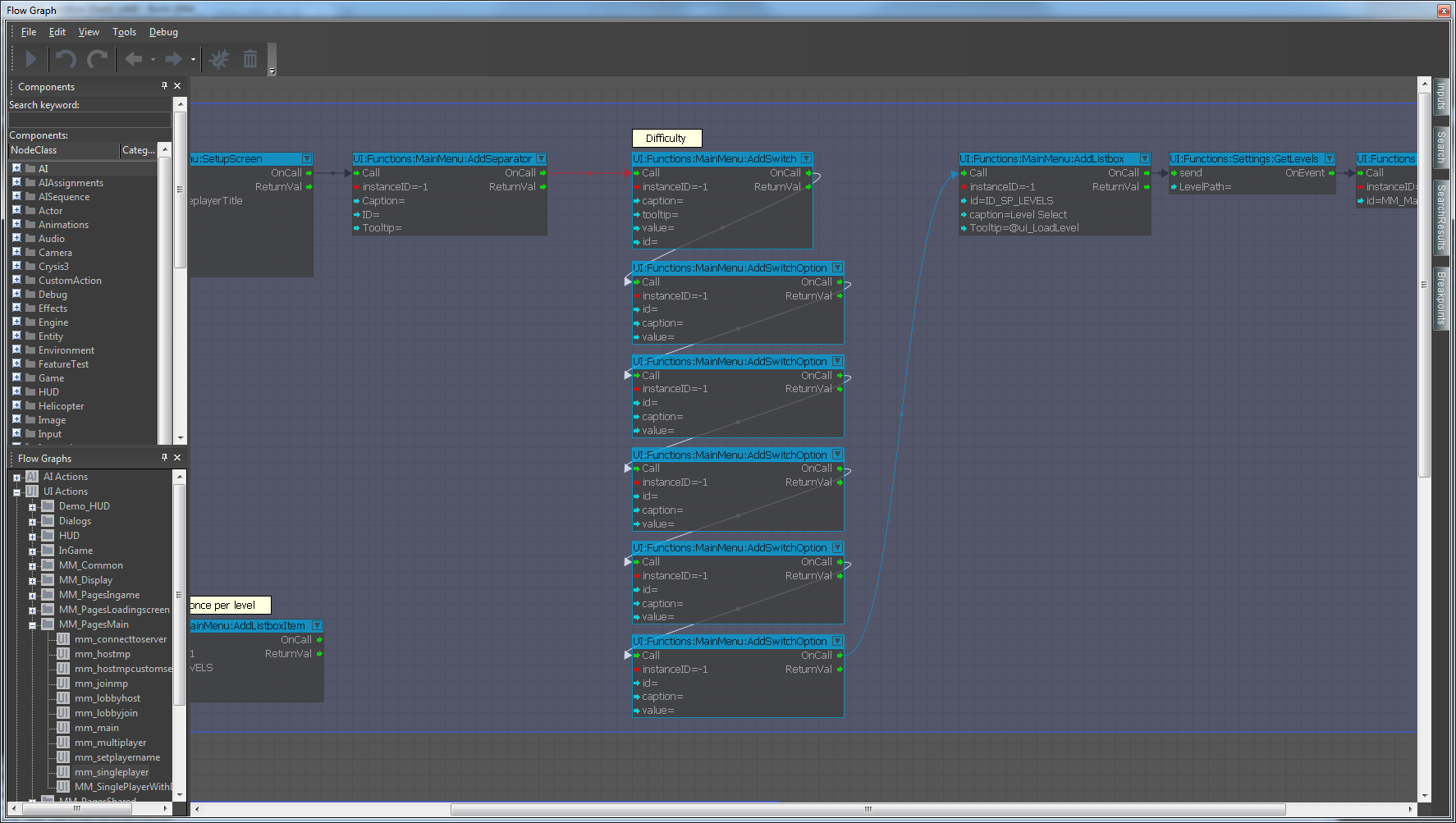 Always keep in mind the sequential loading approach with UIActions. You almost never want to fire multiple logic sequences at the same time which can provide unpredictable results so wire up your logic sequentially rather than in parallel.

By default, the nodes are of course empty, but the data you need to enter into them is very simple once you understand what it's after.

Take a look at the screenshot below to see how they've been filled out for this setup: 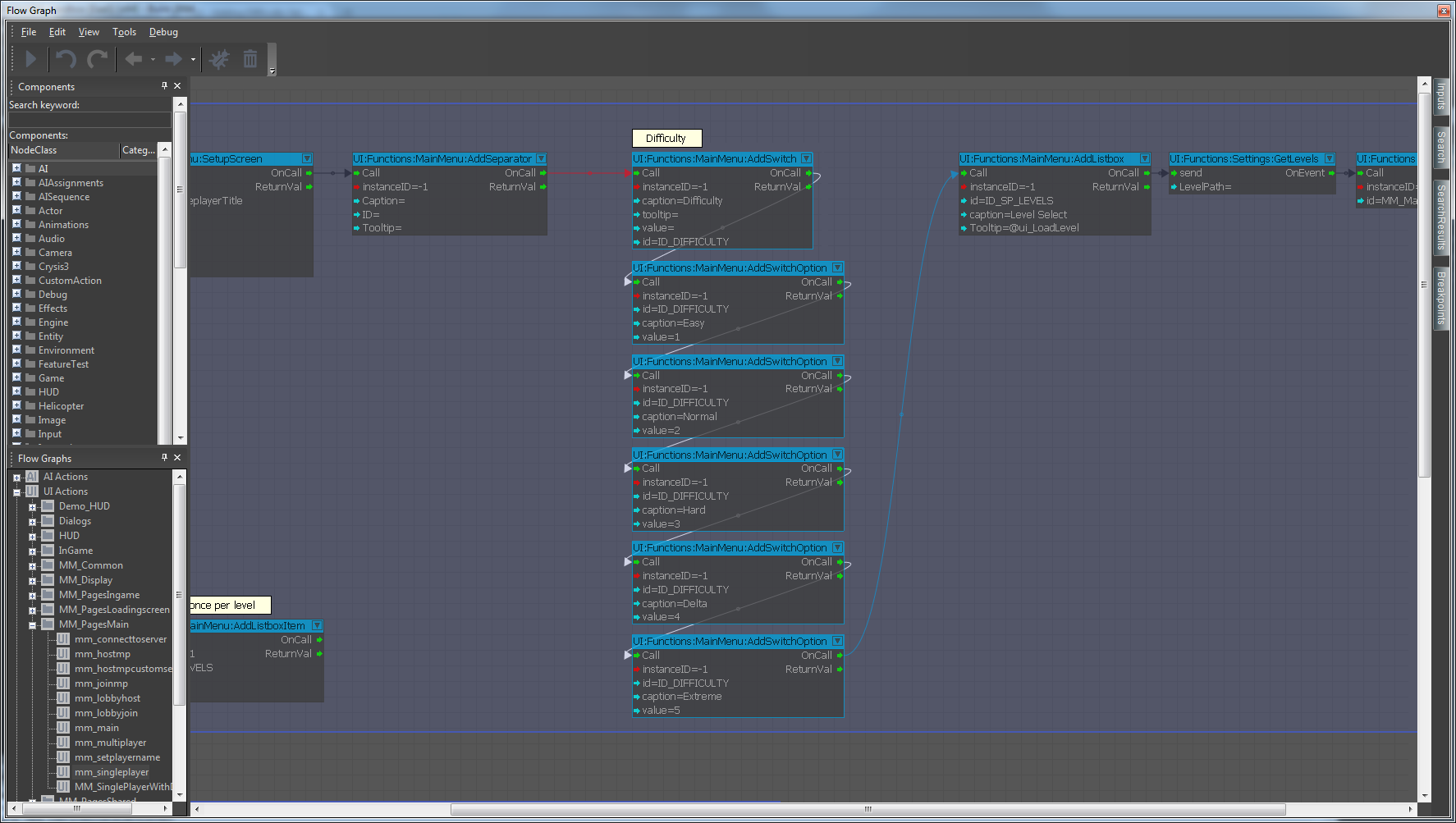 If your game uses multiple languages/localization, you should take advantage of the Localization System and use localization strings for the text input fields.

The ID "ID_Difficulty" was chosen as it is the most logical string to use for this setup. Note that the SwitchOptions need the same ID as the Switch as this is how they're logically connected.

Then simply fill in the Captions (done in plain text for this example) and assign a logical value to each, easy=1, normal=2, etc.

So far we've added our switches, but they don't actually do anything yet. Now we need to hook up the events handling part so that things will actually happen depending on which option is selected.

For this example, we're going to use a simple CVar change via the Debug:ConsoleVariable node.

To retrieve the data from the Switches we'll use the UI:Events:MainMenu:OnControlChanged node. 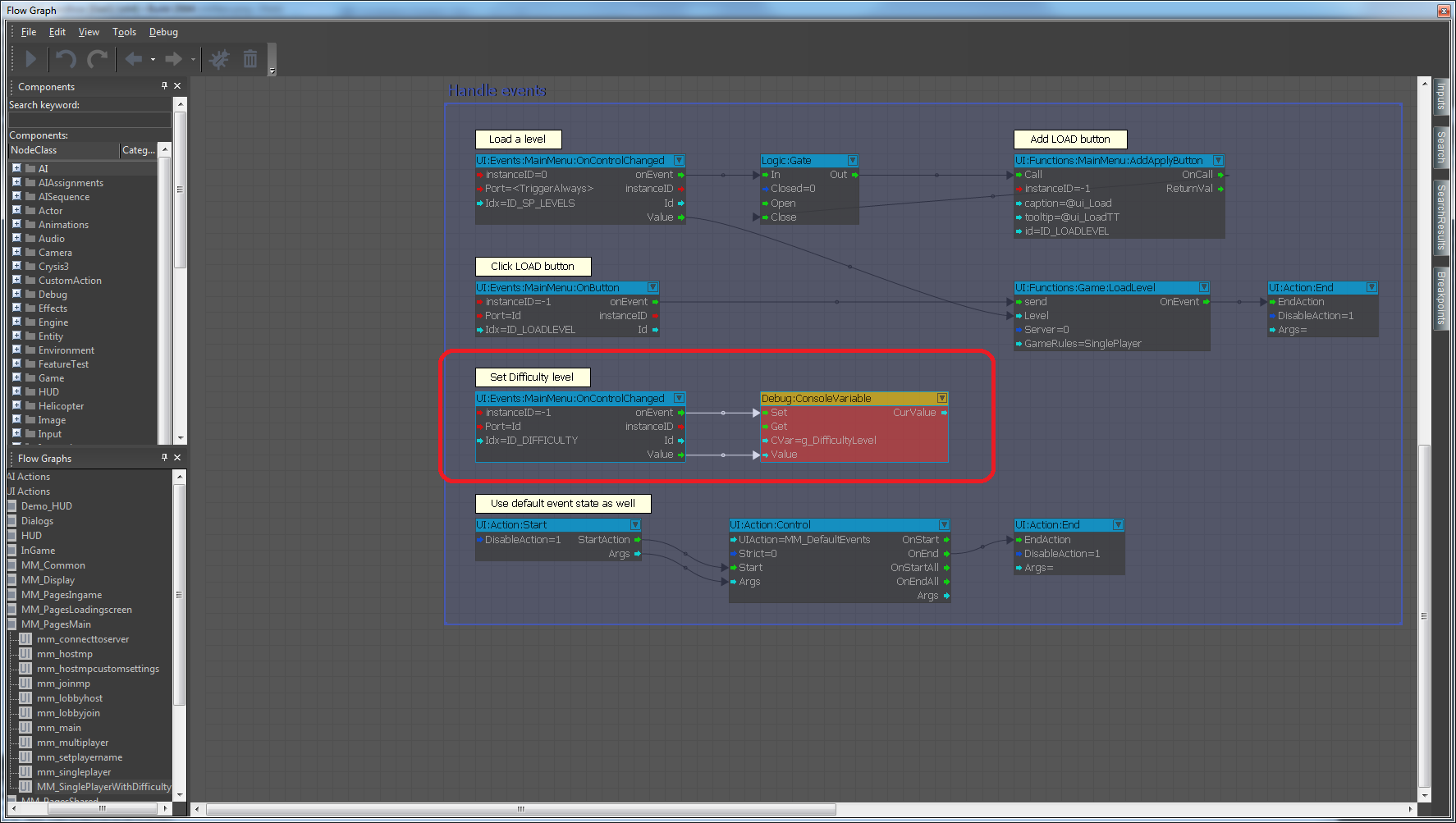 If you've already tested this setup so far, you may have discovered one flaw. If the user were to select a difficulty option (say, "Extreme"), back out of the Singleplayer menu and then return to it, the difficulty option would have been forgotten about and displayed as "Easy" because that is the first SwitchOption the switch receives when building the page.

In order to correctly display the current difficulty setting we'll add in a simple setup to read back what the setting is, and then set the SwitchOption to this value.

At the end of the Setup logic (where we add our options in) add in the Game:DifficultyLevel node, Math:SetNumber nodes and UI:Functions:MainMenu:SetControlVal node as pictured below. 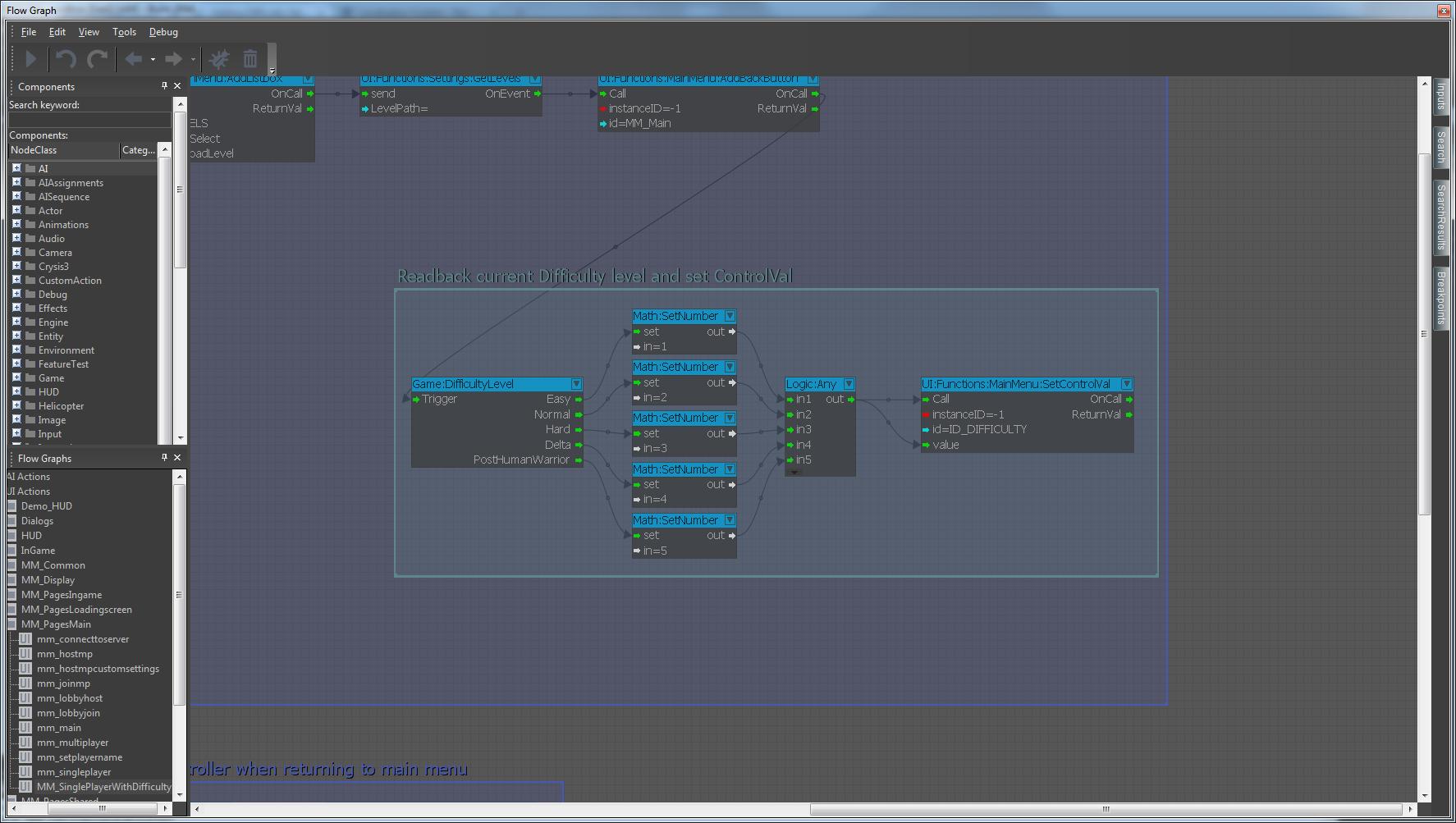 When the UIAction is finished building the initial options it will then retrieve the current difficulty level. With that information we will assign values accordingly (to match our SwitchOption nodes) with the Math nodes.

Now, you should have something like this in your menu: 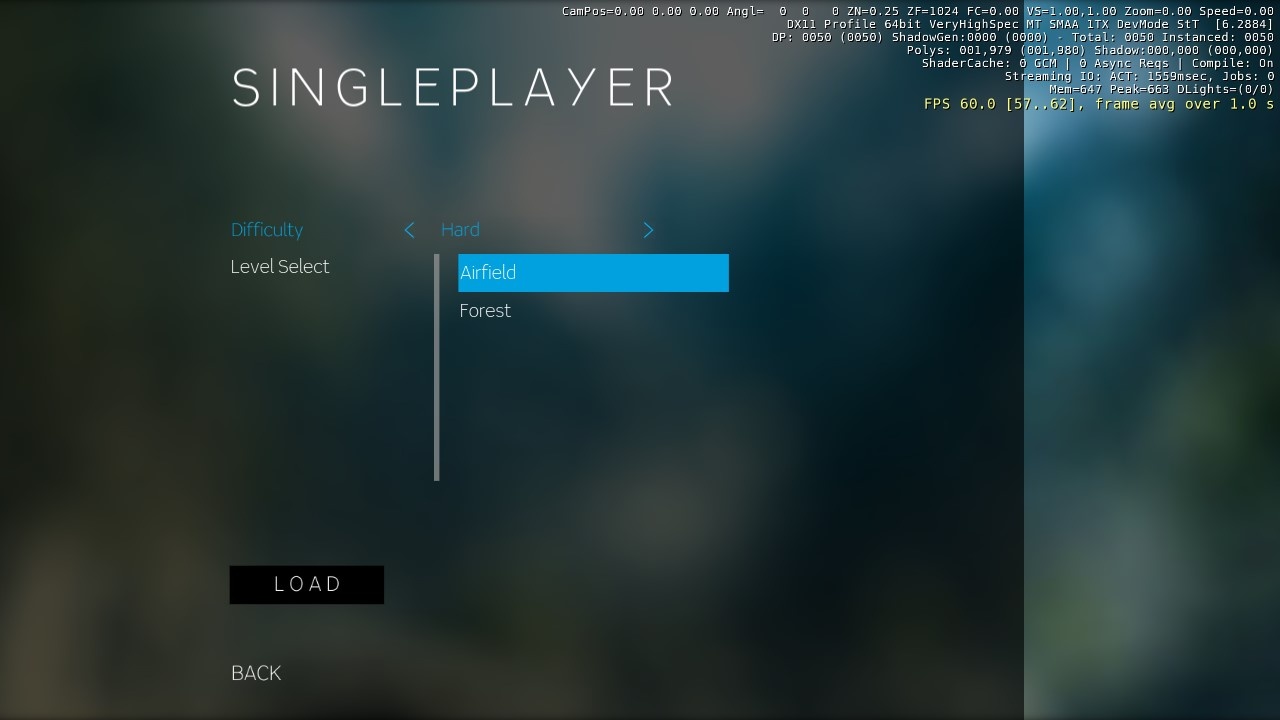 You may also notice each time you select a different config it is confirmed through console: