Common XNormal Baking Errors and How to Solve Them

Many times after rendering out a normal map in Xnormal, applying it to the low res mesh and looking it in Cryengine you have normal map seams like in the picture below. In this tutorial we will explain what they are, why they happen and what to do to avoid them. 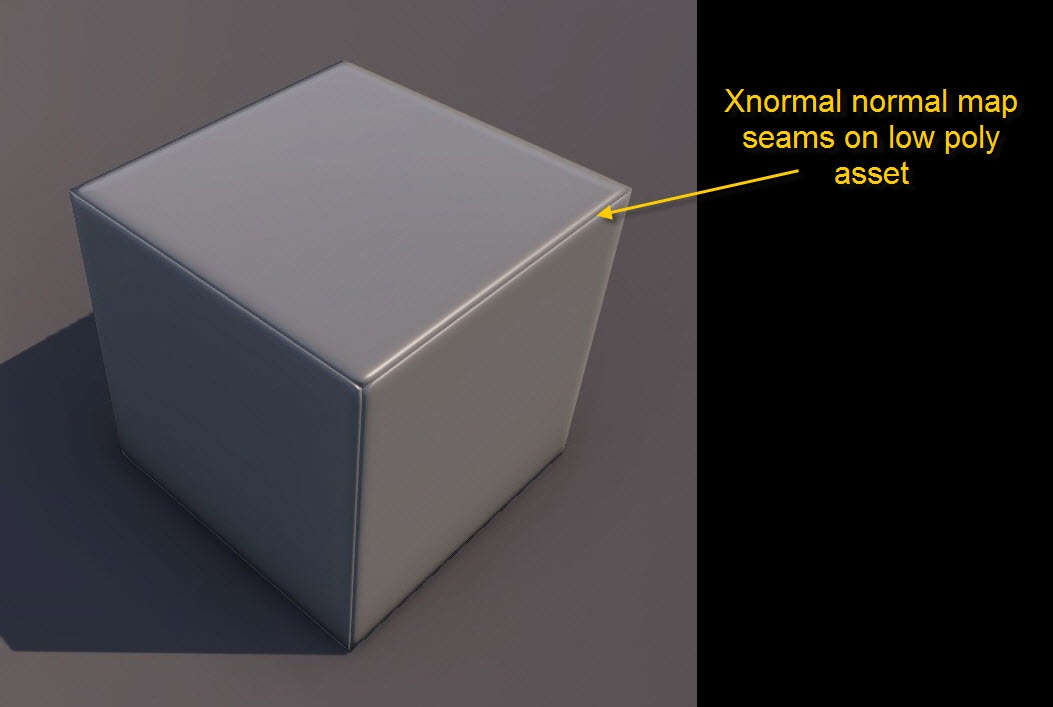 To help you visualize the process we have prepared the image below.

The yellow arrows represent the rays coming from the low poly mesh during rendering in xNormal. 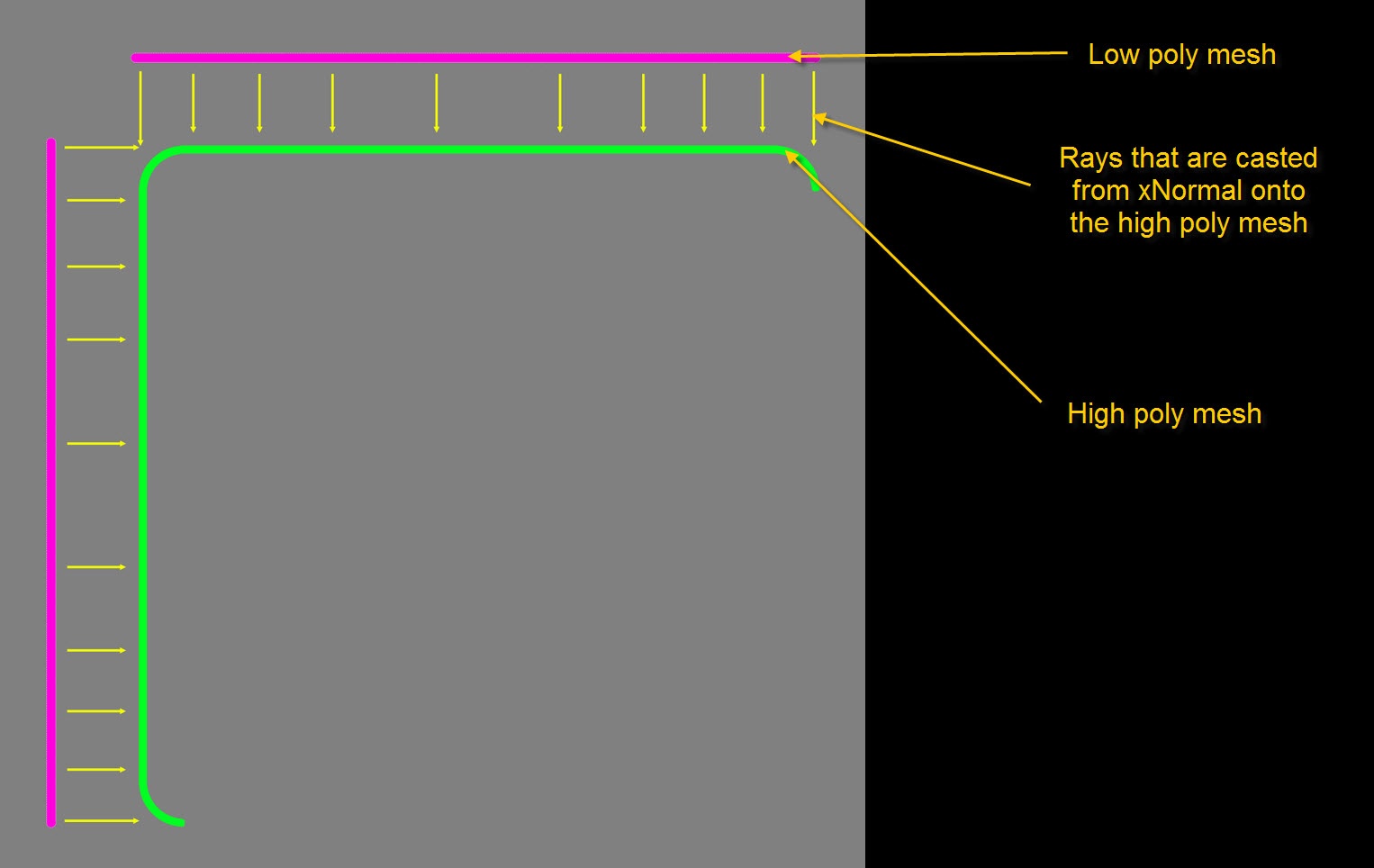 In the image below you we displayed what actually got captured in the normal map and how it looks on the model. 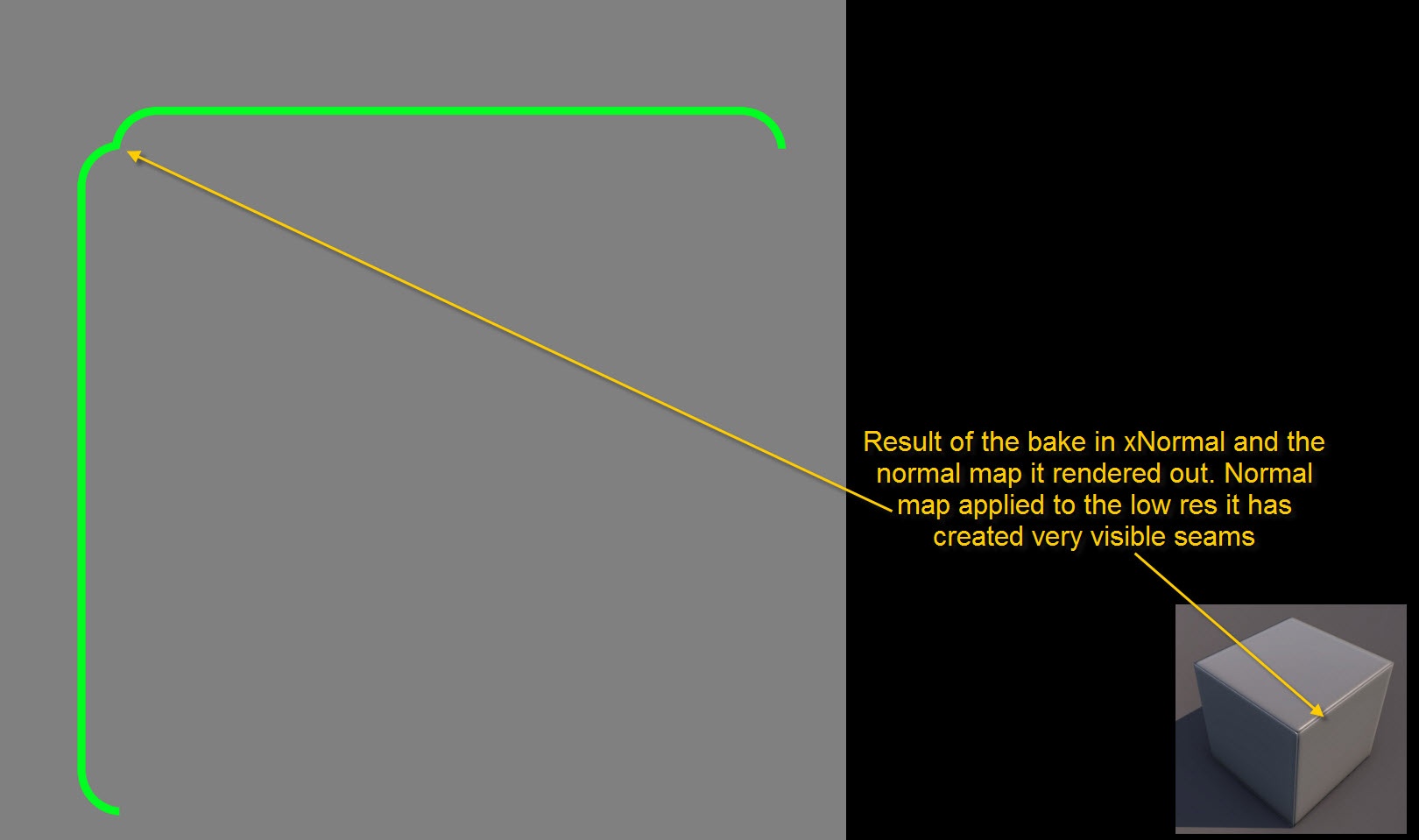 There multiple options to solve this, you should choose which one is the most effective for the particular situation.

xNormal offers the option to use a custom cage that is created and then exported from the modeling package.

It is not the most practical and quickest solution since it requires a lot of time in tweaking the cage, especially on larger complex shapes to get the desired effect, so it is advisable to keep it as an option and not the rule.

To do that you need to duplicate your final low res object and scale it down so, in this case, the edges of the low res cube are right in the middle of the beveled edges on the high res cube.

For more complex assets you should use the "Push" modifier in 3dsMax.

With the push modifier you can specify a more exact setting which works best in most cases plus it can be easily undone or modified. 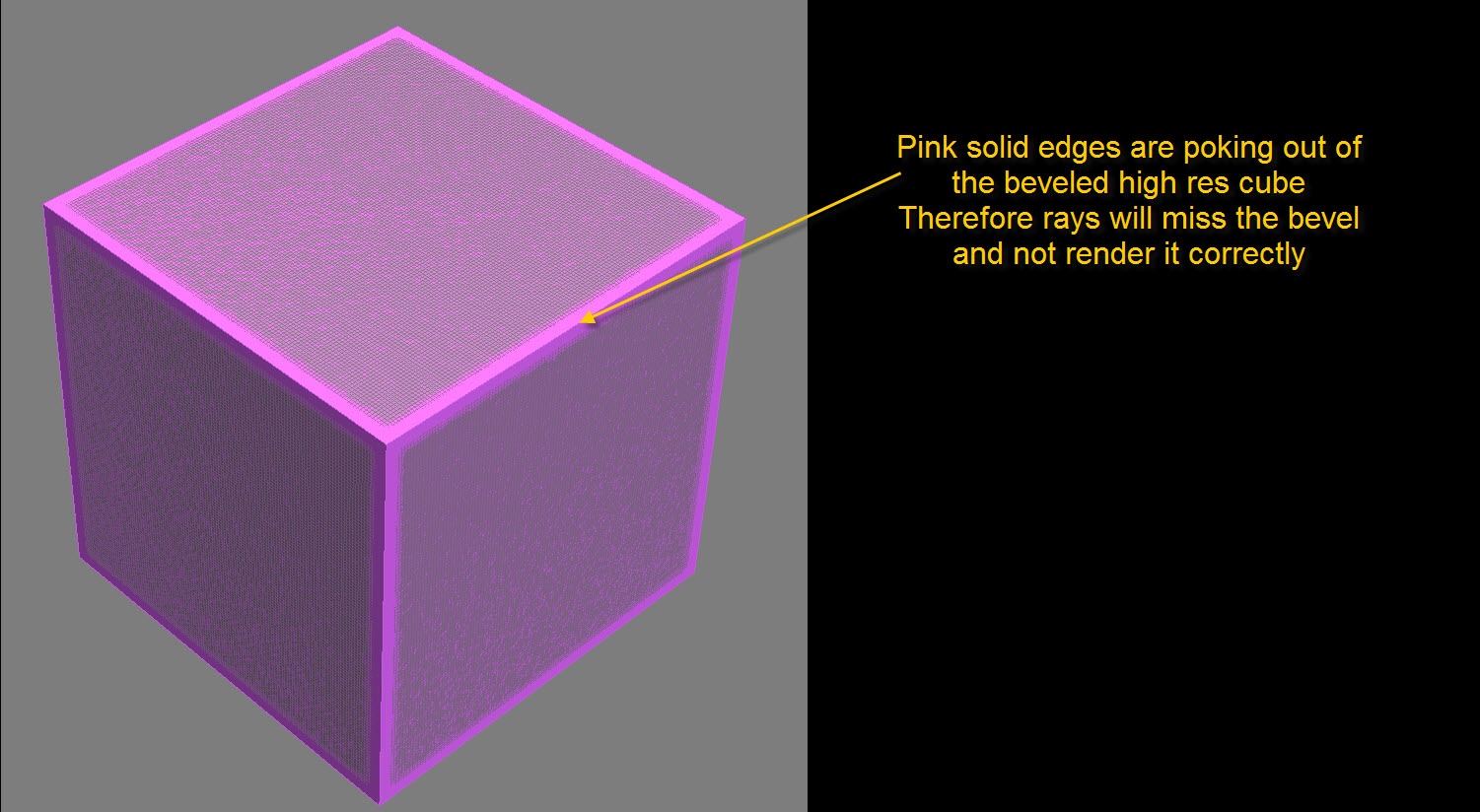 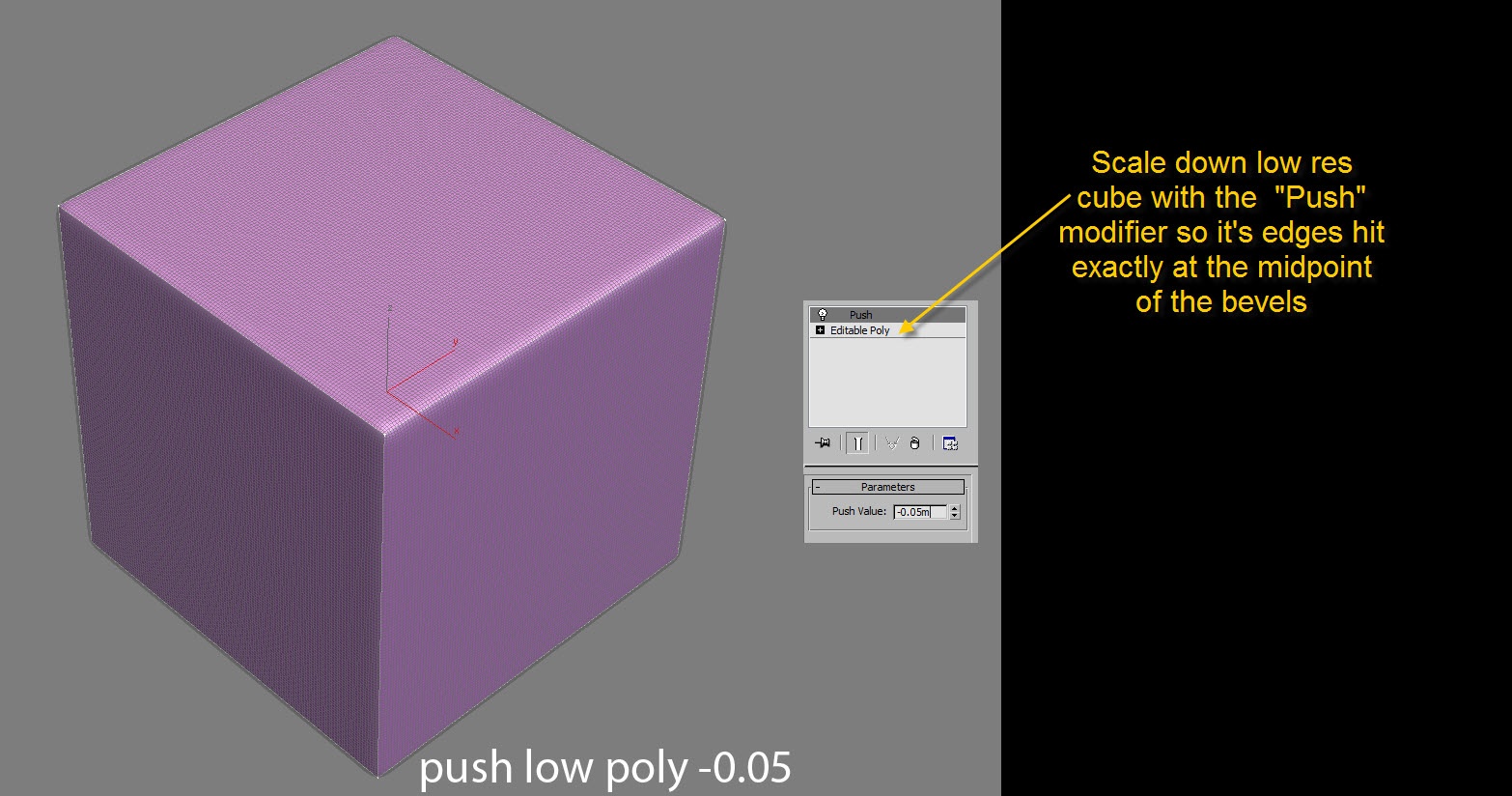 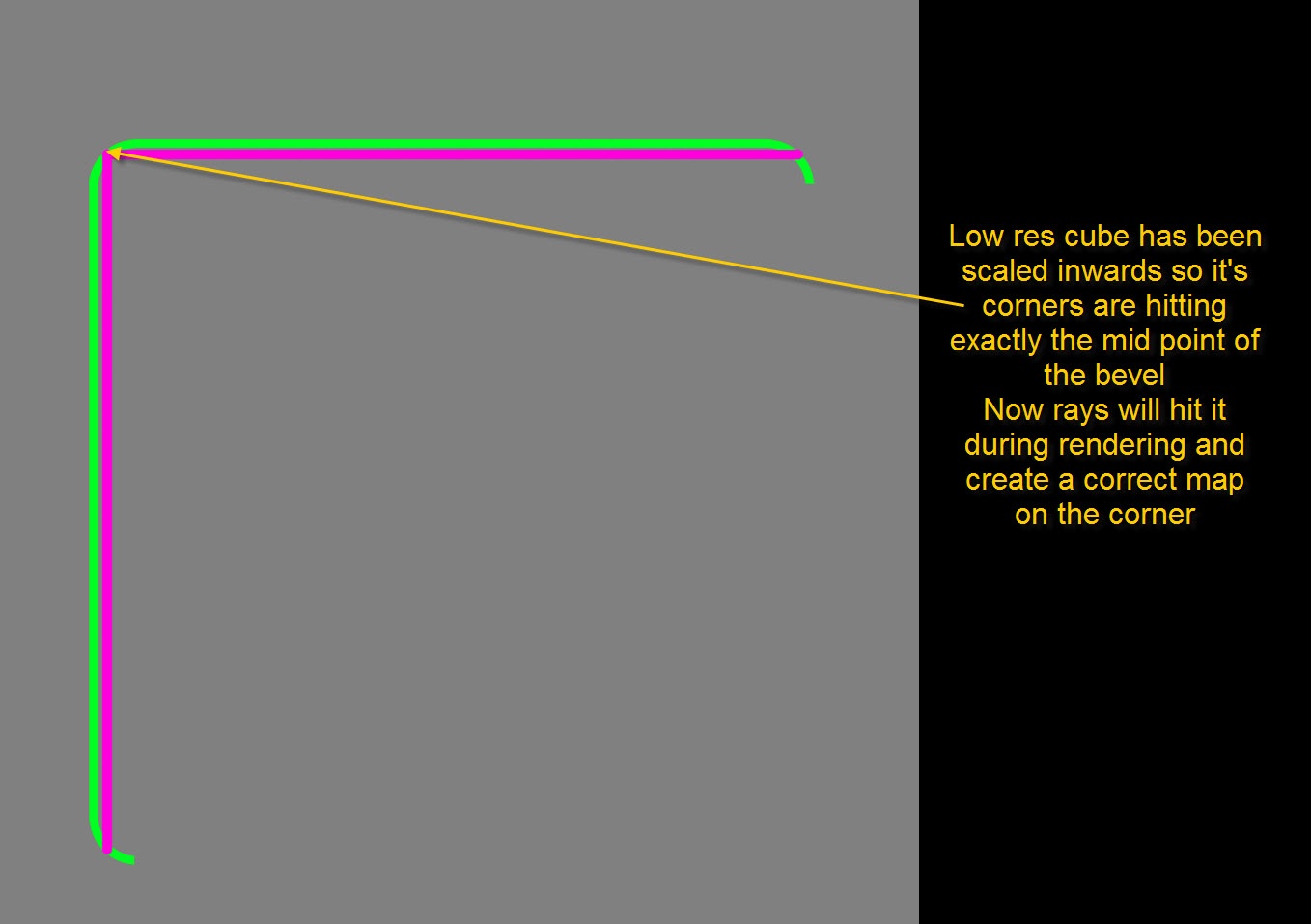 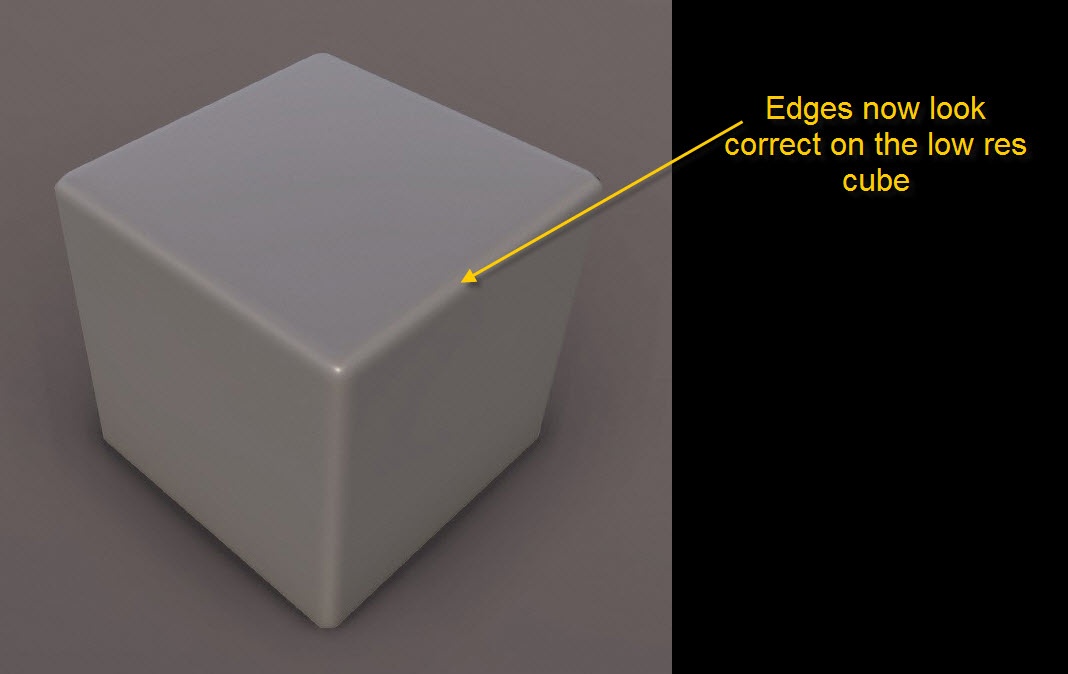 The second way to fix that is by adding a bit more of geometry by adding bevels to your low res asset where it's beveled on your high res asset. It will be more costly geometry wise, but it will give you a smoother and better silhouette.

This will also speed up the process compared to the option below, since the rays are being caught correctly due to the bevel offering extra geometry. 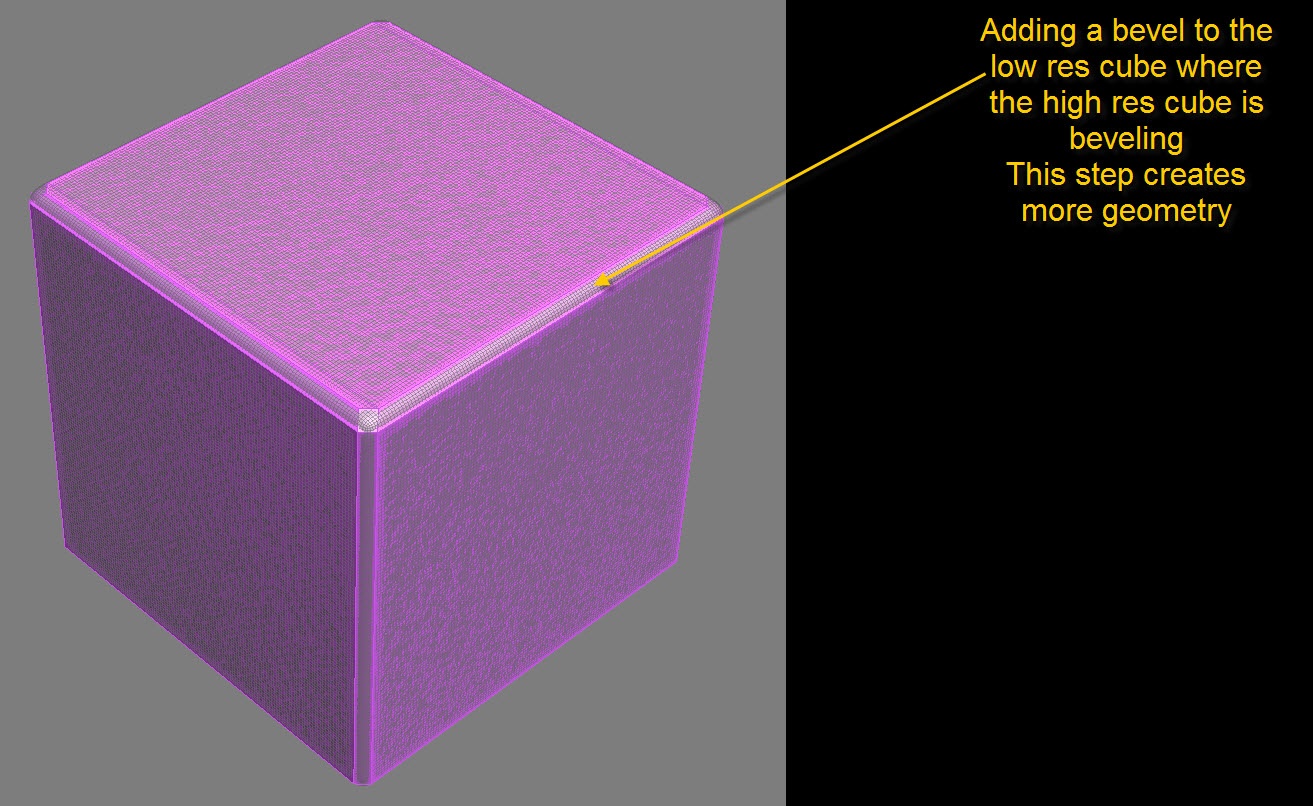 To get the best results when rendering out a normal map when using xNormal it is advisable to split the low poly asset into different smoothing groups and have for each smoothing group it's own UV island.

The benefits are that normal maps will render cleaner and in some cases will provide a greater re-usability.

Having a single smoothing group across the entire low poly asset and having all the UV's connected means that during rendering of the normal map xNormal has to conform the high poly details, meaning it has to compensate during the bake because the normal directions are often offset from the low poly compared to the high poly since it has less geometry to work with and the normals of the low poly are averaged.

Assigning several smoothing groups to it and splitting it up in accordance to it's own UV islands means that it is needing lesser compensation. It is important to keep some space between them. If they're too close it will generate some rendering issues.

The downside is that by splitting it to it's own UV island leads more expensive UV spacing. By doing this it can add greatly to the production time but the final result is better and cleaner since it's leading to lesser visual errors.

As a rule of thumb and to compensate for speed it's best to have one UV island per smoothing group. 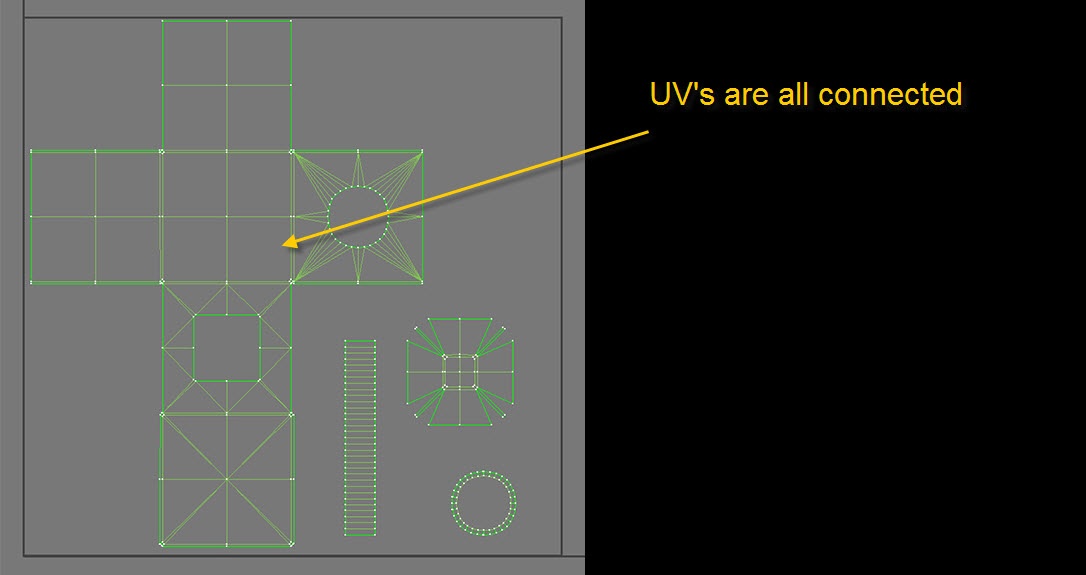 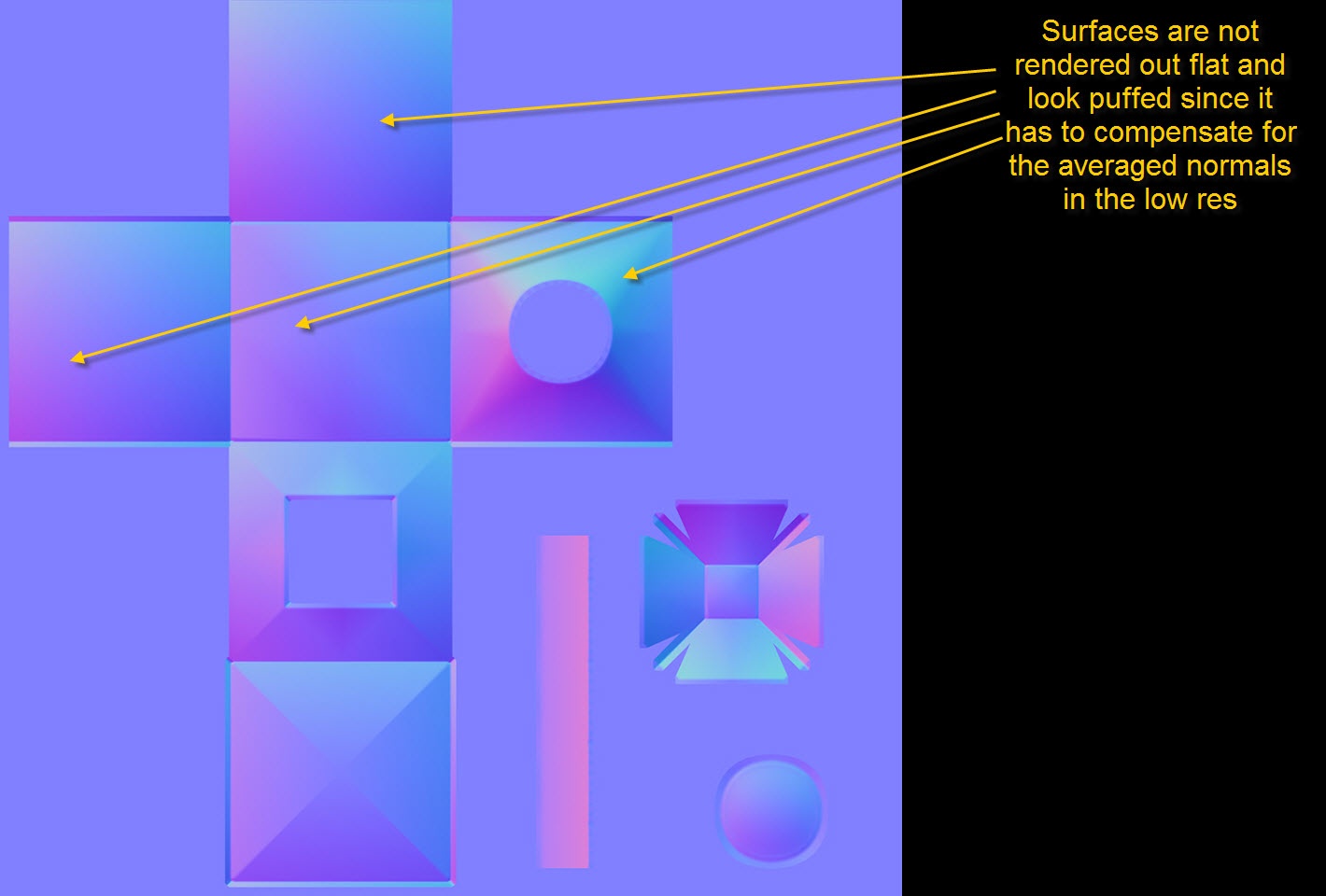 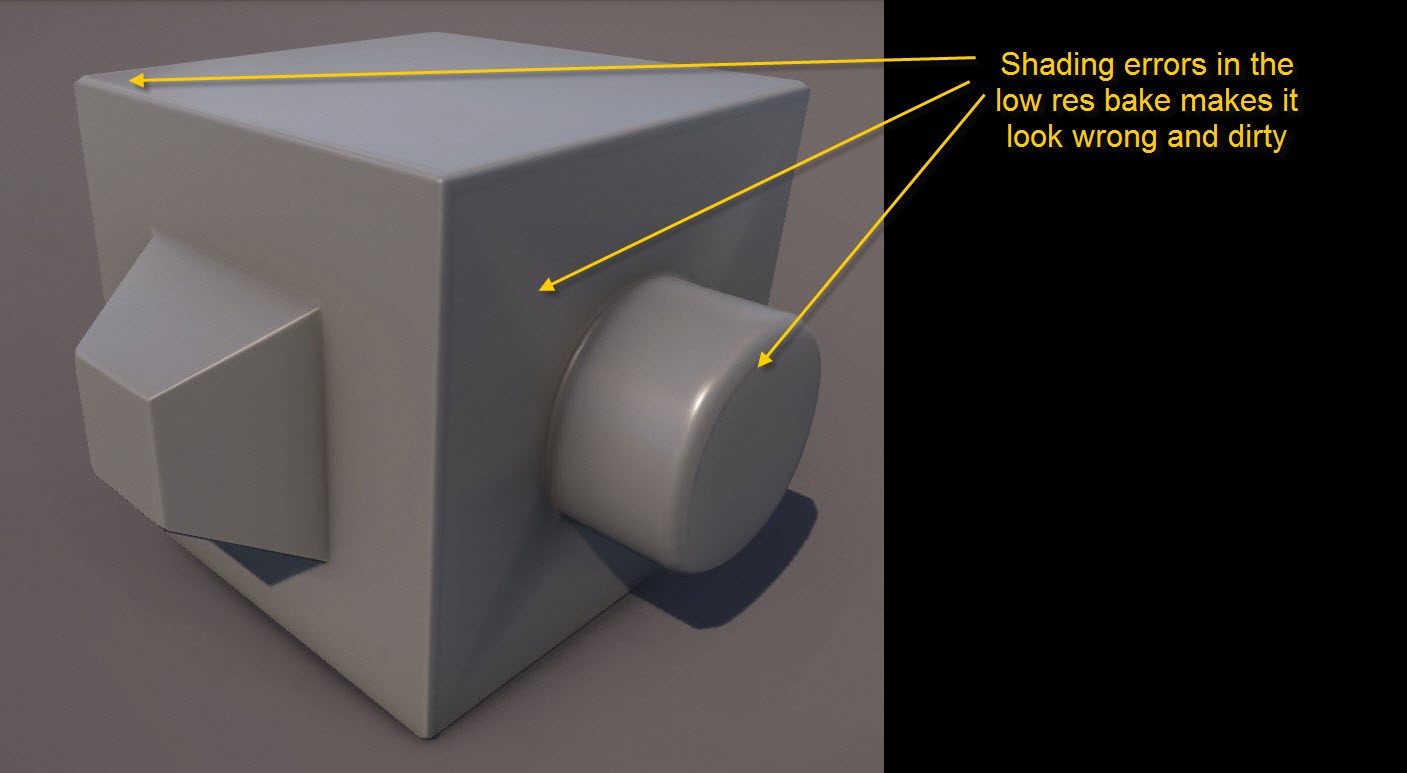 Here are the results after assigning multiple smoothing groups and splitting up the UV islands according to it. 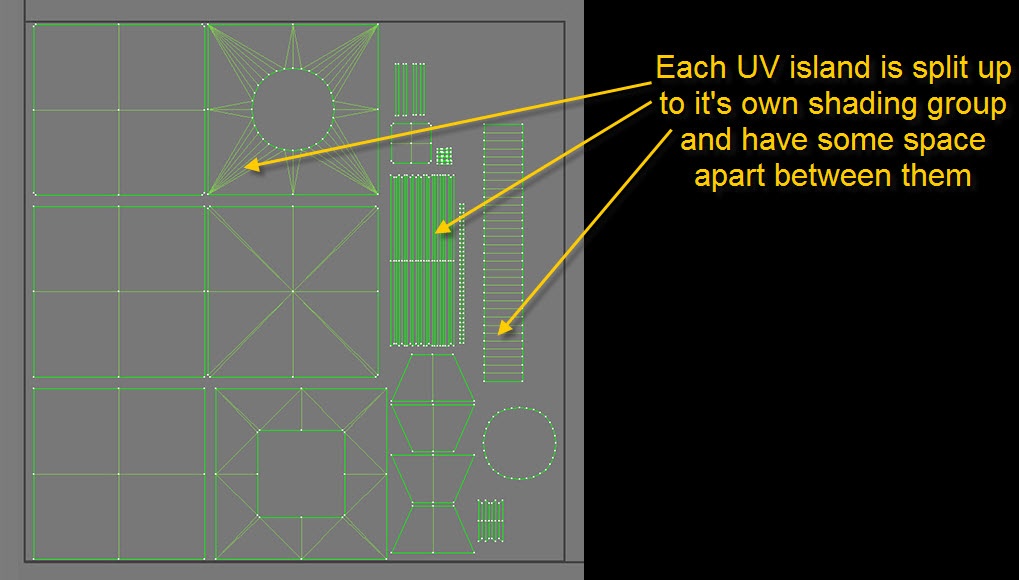 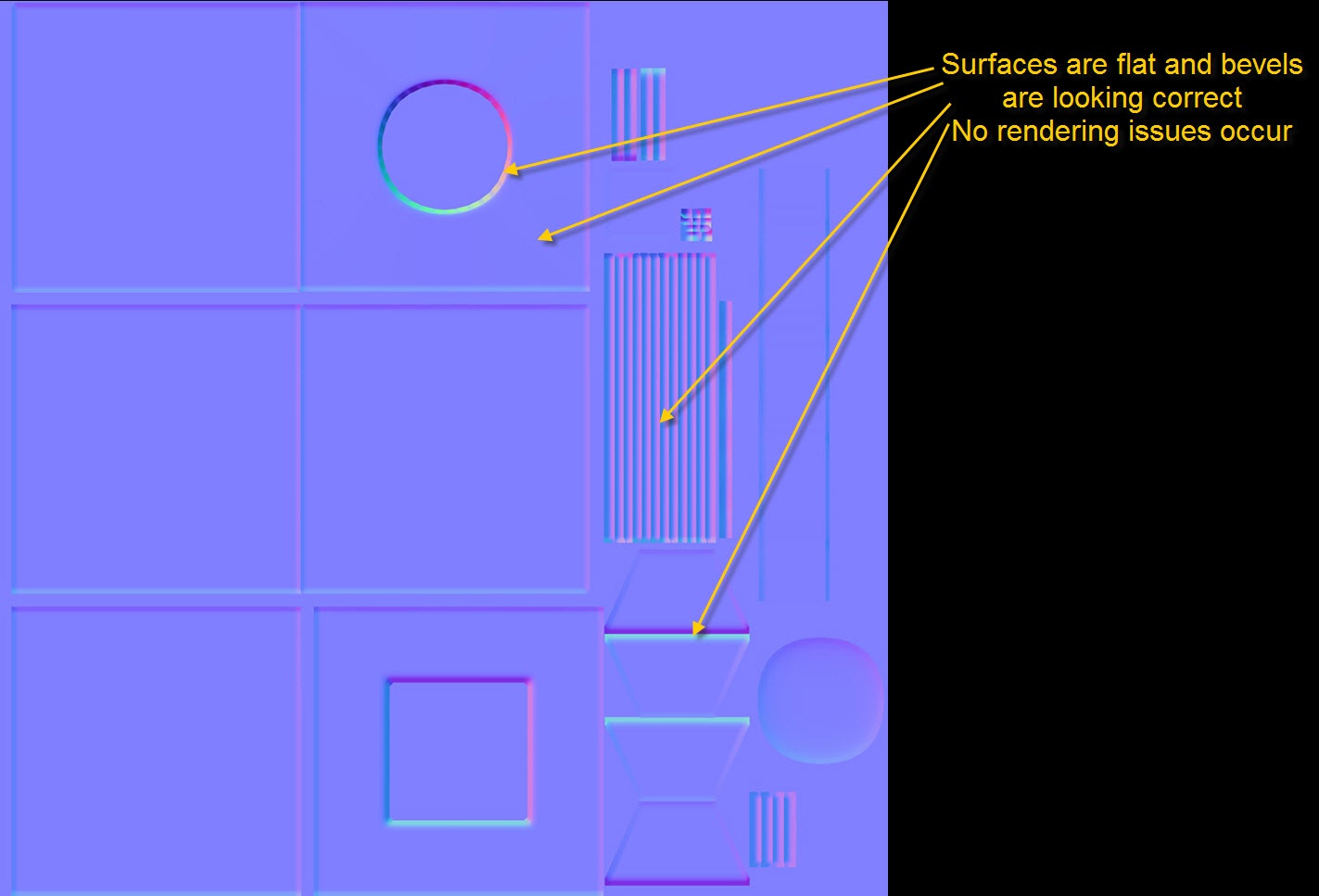 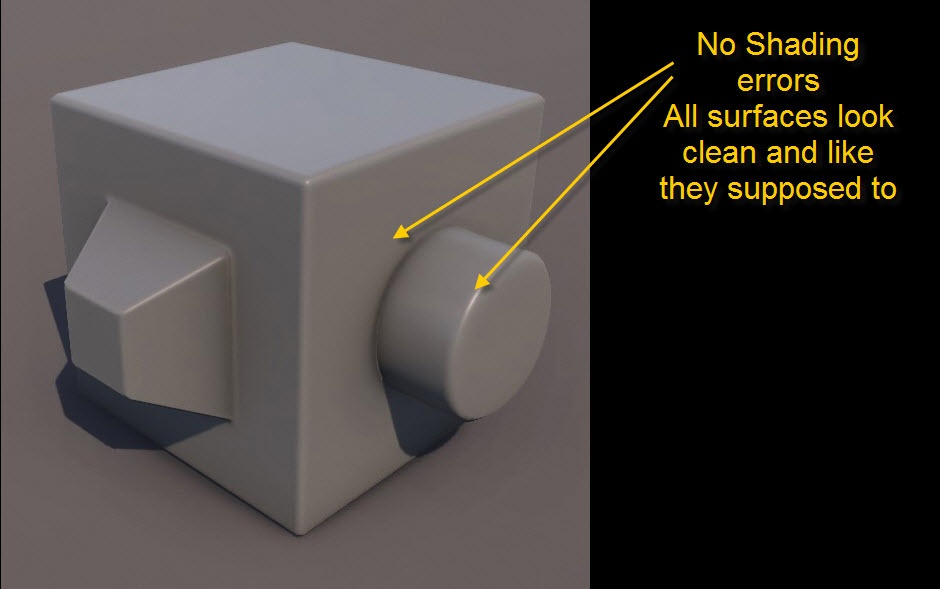