The hair shader is a dedicated rendering technique for rendering hair and fur. Hair rendering is a relatively hard task to achieve in real-time with high quality results due to the very fine geometry and specific lighting behavior.

For Ryse, we relied heavily on the 3dsMax plugin Ornatrix to do our Hair and Fur work. Ornatrix was being used to generate both Highpoly source art as well as Lowpoly meshes that went into the game – specifically its powerful features in regards to lowpoly hair planes make it stand apart from other applications. You are not limited to using this tool but when it comes to the general process of developing your own asset workflows may be similar. 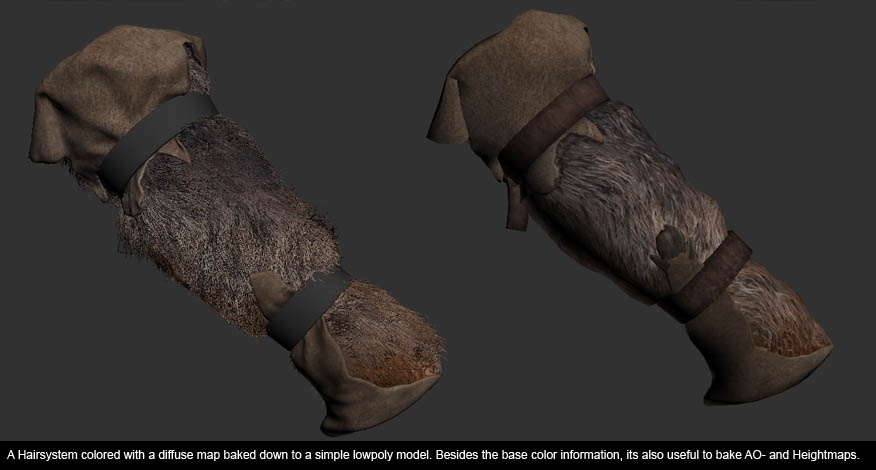 Its quite useful to bake down a falloff map, i.e. setting the hair tips to white, the roots to black. Note: for this to work ‘Per-Strand UV Coords’ must be ON.

When changing hair count, distribution+hair will be reset – meaning even if you revert back to the initial number of hairs, distribution and clustering will be different. Therefore it is not a good idea to change the number of hairs on the main copy of your hair system (if you have already started baking down other diffuse maps)

As above, its best to bake normal maps from a hair system with reduced hair count and increased hair thickness. Also, make sure not to use smoothing groups, and to set the hair cylinders to use more than 3 sides (in Ox Mesh from Strands)

Similar to normal maps, but instead the mesh must have per strand UVs (the UVs filling the entire 0-1 range in both, U and V coordinates, but not exceeding that range) and the mesh must be exported with the Directionality Normals 3dsMax plugin. Make sure to check whether the resulting map works in the engine – you might have to swap the red and green channels. 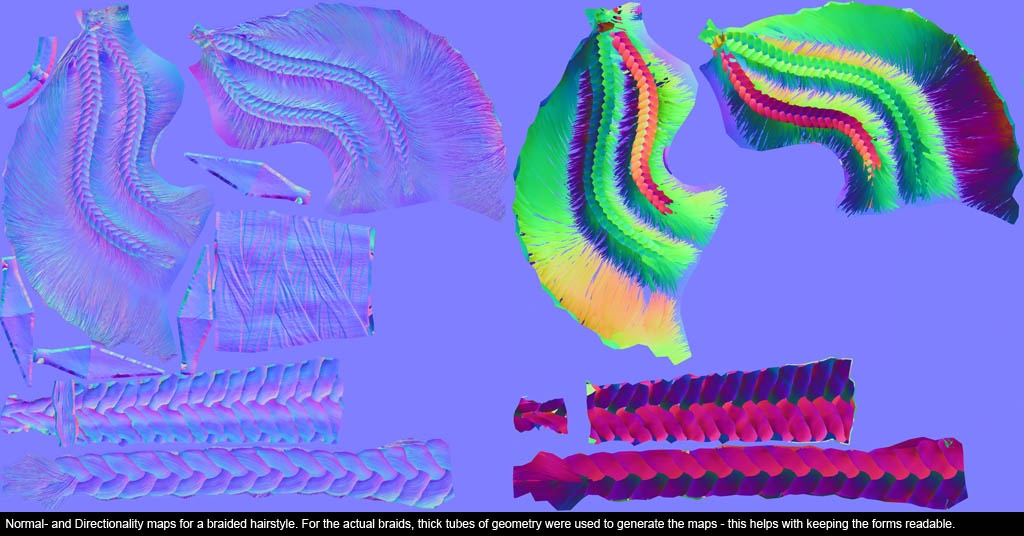 Parts that are hard to bake: baking down complex hair can be somewhat tricky – you are dealing with rather messy and heavy models, and baking issues are not uncommon. What usually works best is to reduce baking problems to an acceptable level and then fix remaining problems manually. You can use backdrop objects in your bake to stop the lowpoly hair from capturing unwanted areas.

Another option that works very well (esp. on secondary elements) is to morph your model to UV space and set up a flattened hair system.

Having more resources allows for a larger number, which in turn changes what kind of hairstyle can be solved with planes rather than solid geometry/large patches of hair. However, keep in mind that LODs are required for many characters, making a hairstyle that uses hundreds of individual planes for a random NPC - not a good idea. Generally, this approach (as well as View aligned Cards, see below) will create the best looking results. Also, creating these planes (based on an existing hair system) can be very fast, depending on which tool you use. In Ryse we used Ornatrix. Ox (Ornatrix) Mesh from Strands (for UVs/orientation of hair planes), Ox Render Settings (for plane size and tapering) as well as Ox Hair from guides (for distribution settings and hair count) all play together in making good lowpoly hair (or at least, a decent starting point).

If the original hair system had colors, those can be baked down to vertex colors to recreate the look of your high-res hair system(since your UVs will be shared, you cant do this with textures)

Initially set up the Ox Mesh from Strands to use Per-Strand UV Coords >> add a Unwrap UVW modifier to the top of the stack (turn this modifier OFF) >> in Ox Mesh from Strand, turn off Per-Strand UV Coords., apply whatever texture/material you want to use for the hair >> bake down Vertex Colors (Utilities Tab > Assign Vertex Colors) – this modifier will be put at the top of your stack. Finally, turn the Unwrap UVW modifier back on. 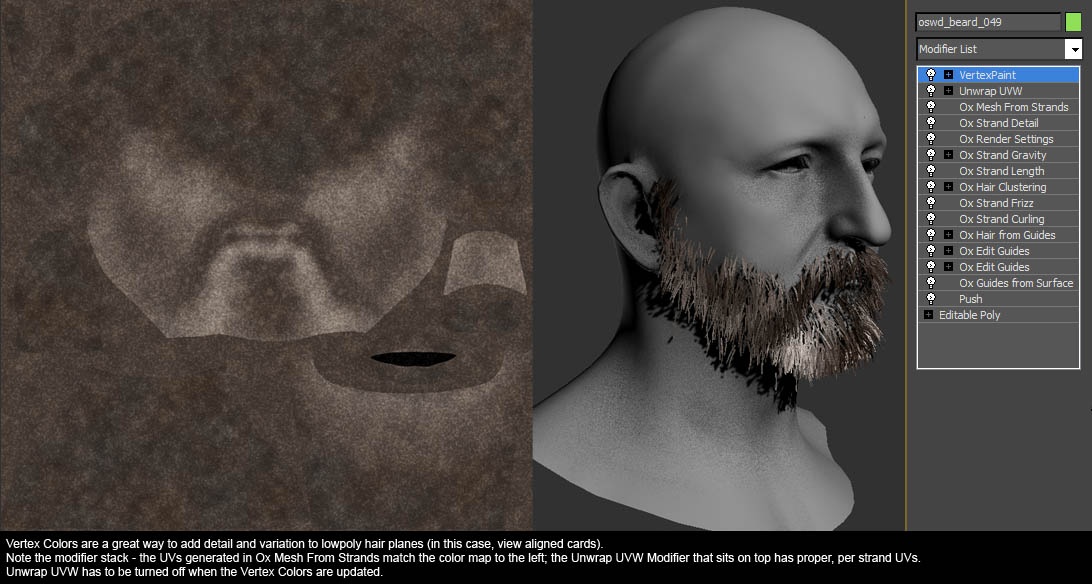 Vertex Color display in CRYENGINE can be somewhat different from what you see in your DCC tool. Some tweaking of Hue/Contrast in the Assign Vertex Colors modifier might be necessary to achieve the desired results.

A good tool for copying normals from a simple reference object over to your hair planes is SlideNormalThief.

Transfer Maps can be a useful tool for transferring normals or projecting them to a target mesh. 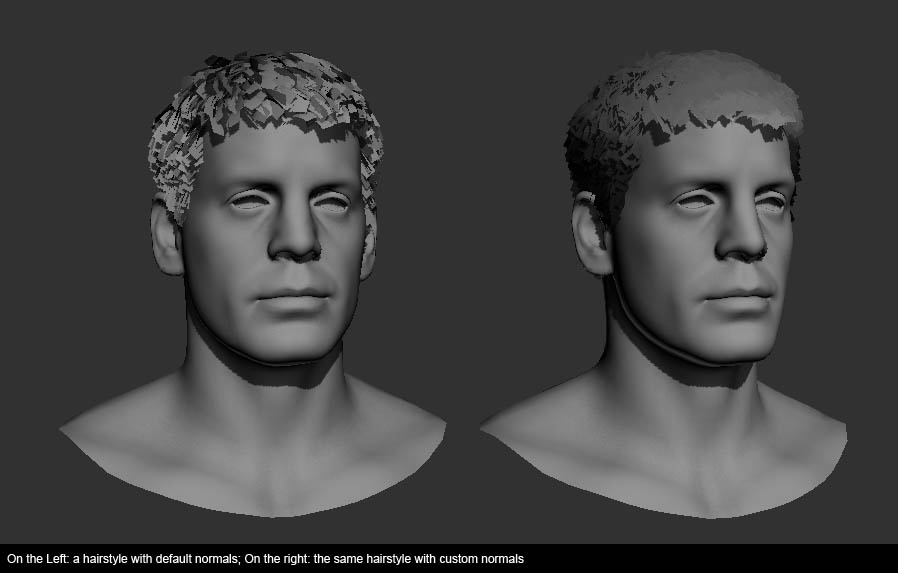 99 and below will use Alpha Blend (‘Thin Hair’). When using alpha blend, Thin Hair (in ‘Shader Generation Params’) MUST be turned ON.

As with most other shaders. Again, the hair shader does not support gloss maps, thus use ddn format for normal maps. The directionality maps should also be saved out as a standard normalmap.

By default, anisotropic highlights will be aligned to the V coordinate in UV space - this means that in many cases a Directionality Map is not needed for hair planes, if the UV are set up properly. 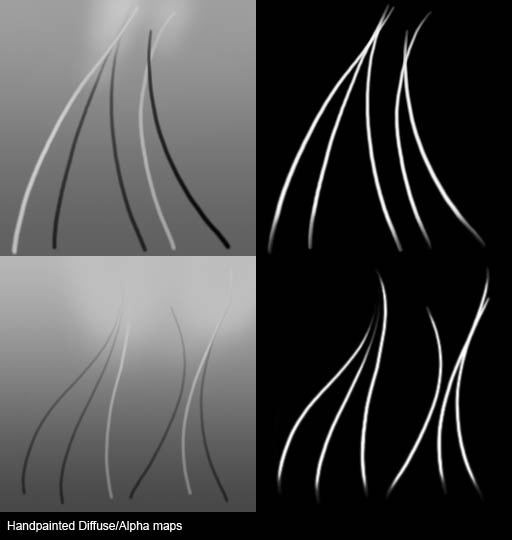 An extra shadow mesh can then be used to still get decent shadows from the hair (e.g. Marius’ helmet plume uses a separate mesh to cast shadows, the actual hair bits that are visible in the game have shadows turned off).

Similar to traditional Hair Planes, the difference lies in functionality within CRYENGINE: view aligned cards will always face the camera – this can be extremely useful for faking volume/covering up the typical ‘hair plane’ look. For view aligned cards to work, the hair strands in question must be assigned a unique material ID – then in the material in CRYENGINE, turn on ‘View Aligned Cards’. When generating the mesh for VACs, its best to make them very thin - thickness/width can be adjusted in the Editor/Material; Meshes that are too thick tend to break during the scaling process.

If both, front and back faces of a hair strand are visible, the aligned will create a weird looking ‘twist’ at the peak point. This limits the use of view aligned cards to short hair, or hair that is relatively straight.

Due to limitations in hardware regarding alpha blending sorting, we cannot at this point have per-pixel sorting which would save a lot of work, so we need to use a very cheap sorting approximation which works something like this:

Render hair opaque areas (this is where your alpha channel is 1 (white)). Then render hair backfaces, and finally render hair frontfaces.

This works for many cases but it has a lot of limitations, regarding modeling for it to work:

When "Soft alpha test" is enabled, the hair will be rendered using the usual opaque rendering pipeline. In a post process we apply alpha test smoothing. You can also enable double sided option at will.