Jumping Ahead or Back in a Scene

The GoTo track allows to jump ahead or back in time while the sequence is running. It is primarily used to turn parts of a sequence into a loop.

To setup a GoTo track:
Add the camera to your sequence by right clicking "Add Selected Entity Node" on the sequence main node.

This sequence will keep looping from second 1 to second 3.

Using a GoTo key to jump to a different point in time will automatically apply animation blending on all currently playing animations in the sequence. If animation blending isn't desired for a scene (e.g. because all used animations are pose-matched), you will have to use the "Loop"-property instead.

If the length of a sound extends into a GoTo-loop, then its last part will be repeatedly played. In most cases this behaviour is not desired and the sound key needs to get moved further away from the target of the GoTo-jump.

When this scene starts to loop, the last bit of the sound will get triggered each time it jumps to second 8.

GoTo Key at the End of a Sequence

GoTo keys placed at the very end of a sequence will never trigger. The sequence will simply stop playing instead. To solve this problem, extend the the end time of the sequence by a small bit.

When to Use the Loop Property

Even though the GoTo track is more versatile than setting a sequence to "Loop" in its properties, sometimes it's better to use the latter option:

This sequence will jump to second 5 when the proximity trigger fires.

Having multiple jump triggers that jump to different times can be realized by using Math:SetNumber nodes and a Logic:Any node.

Three different jump points have been setup for this sequence.

The "PlaySpeed" input on the Animations:PlaySequence Flowgraph node controls the playback speed of the sequence. If you simply want a fixed slow-motion (or fast forward) effect, use the "TimeWarp" track of the Scene node instead. 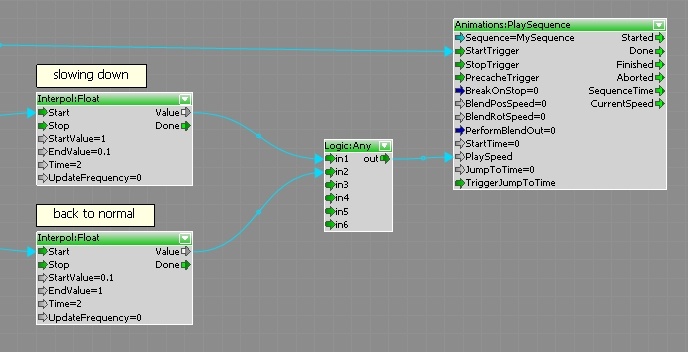 These two Interpol:Float nodes allow to slow down the sequence and to bring it back to normal speed again.