CRYENGINE can automatically adjust the character's legs and feet to match the surface of the terrain or ground he is standing on.

This includes the foot aligning to the direct of the slope in addition to the leg adjusting to different heights.

Animated Character must be used for ground alignment and foot / leg IK to function. This means that simple entities like the animobj entity and others will not use this function. The character must be a live animated character, which can be accomplished by using the default player class or default AI classes such as human.

The character's skeleton needs to have certain bones and names in order to make the groundAlignment work. This setup needs to be done in the character's .chrparams file. Setups for both legs must be added to the file:

As with previous versions of the engine, animated character classes must be used if you wish to have the adaption, using the animobj entity or something similar will not function.

Within 3.5 there is a few less specific naming conventions that must be followed, however, the setup is similar to 3.4

1. Setup the required naming conventions that are written in C++ within the InitializePoseAlignerBipedHuman function.

2. Define the joints that will be affected in the .chrparams file.

You can have any name set for the calf, foot and thigh of your character as long as it's defined in the .chrparams, but make sure that the handle name is "RgtLeg01" for the right leg and "LftLeg01" for the left leg.

Plane Weight Node Aligned to Pelvis on Z , Zero on Y and Over the foot on X.

Here are some very useful console variable to see that the pose aligner is active is: 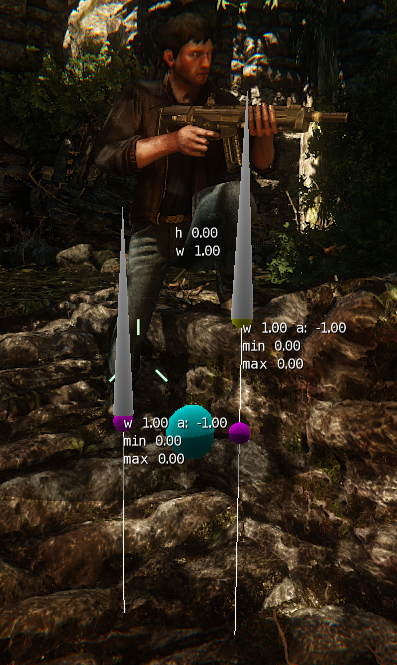 Use ca_groundAlignment to turn on and off the automatic ground alignment on all characters globally. By default this value is set to 1, which means it is active.

Unable to render {include} The included page could not be found.

The FlowGraph node Animations::GroundAlignment can be used to enable or disable this feature during the game.

Like the FlowGraph node described above, the feature can be disabled/enabled for individual characters at runtime via code as well.

The interface function is declared in ISkeletonPose:

To activate or deactivate the alignment from within the game dll actor or player implementation, use this code: