The "Others" entity category contains entities that don't fit into existing categories or are used across multiple categories.

A camera shake entity is an object that can be triggered in script to make the player's view shake when within the object's sphere of influence.

A Camera Source entity is the reference position for a scripted camera view to look from. The point at which the camera points is defined in the Entity Links dialog.

Click on "Pick Target", then on the object you wish to target to create a link. 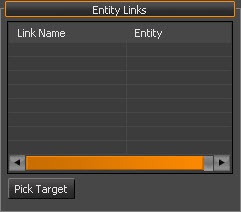 The main purpose is to reduce the number of inactive AI in your level. You only need one AI-Character somewhere disabled and hidden in your level in a visarea (not under terrain) which will be used as your base.

Through flowgraph, this base can be cloned unlimited from now on.

The Decal Placer Entity will place decals perpendicular to it's defined normal. It's meant to be used as a means to dynamically place decals through Flow Graphs and cut-scenes. It can also be attached to other entities.

The EntityFlashTag entity is currently used for the name display above characters heads in multiplayer.

A flat plane .cgf model is used and a Flash material is applied to the model which then is able to display the username of the player.

A fan entity is used to simulate a ceiling mounted fan. The same functionality can be achieved using a simple flowgraph.

The hazard entity deals damage to entities entering any areas that are linked to it. The damage received by entities is dealt per second and can be set up in the properties. The hazard entity is used by linking areas to it that will trigger the damage when entered, similar to an area trigger.

In addition, a damage type can be set in the properties that determines the kind of screen effect the player will get when entering the area of the hazard entity. The damage type determines what kind of post processing effect will be applied on the screen. If the damage type is set to frost for example the screen will slowly start to freeze while the player is taking damage. There are three damage types currently: frost, fire and electricity.

The interactive entity is used as a base to create interactive objects in the world. It is a user entity for creating things like televisions, computers, vending machines, etc.

The functionality of the entity can be set up in the properties with a lot of different options. One use for the entity is to spawn particles, play sound events, or even to spawn new entities.

A mine entity is an object that will mimic the behavior of an explosive mine. The size of the explosion, delay between trigger and explosion, and various other settings can be altered.

A Mission Objective entity is an object that is used to define the position of the player's goals in the level, and the text associated with each goal.

A mission object can reference another object as a target for the mission, for example, a moving target requiring player interaction.

The Precache Camera entity is used by the level precache system. Right after a level is loaded the engine will internally draw the level using camera positions and orientations specified by these entities.

This solution is used in order to pre-activate all render resources and in this way minimize stalls during game-play. Level precache may be activated by using the e_PrecacheLevel variable.

A shooting target entity is an object which can be used to create a shooting range. It is able to count hits and output a score.

A sound suppressor is an entity used by the AI system to reduce the apparent volume of sounds within its radius area to AI characters, meaning these sounds are less likely to be noticed and reacted to. Used in conjunction with Flowgraph.

A Singleplayer or Multiplayer spawn point which defines a players start point. If you don't use a SpawnPoint in your level, the player will spawn at 0,0,0 coordinates. It is not recommended to have spawn points closer than 4m apart.

A switch entity is an object with an on/off state, used for simulating light switches and other switches. It has various flow graph ports exposed to allow its activity to be checked.

UIEntities are used in the HUD prefab to create the 3D HUD elements. You can specify the model used to display the UI material on.

In the case of the HUD, these models are from: GameSDK/Objects/hud/HUD_Plane_x.cgf