Ideally we would like to change nothing in order to ship CryENGINE 3 games in S3D. 99% of the time this will be the case, but below are some items that must change, and things that should be considered whenever making any new project.

The vast majority of these settings have recently been exposed to designers an artist through an interface in the CryENGINE 3 Sandbox.

It can be found under the display tab at the bottom in the sandbox rollup bar. 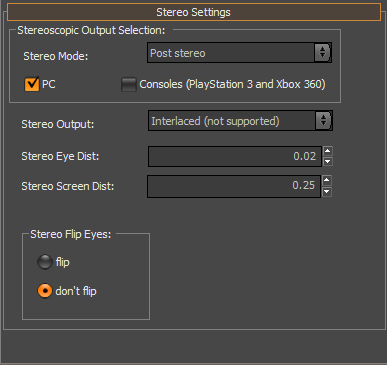 Ideally all methods would work with all output devices. However, a naive implementation creates quite a large amount of permutations that need to be maintained. A different approach is to split the stereo image generation from the actual output conditioning. This will sacrifice some performance and memory in some cases, especially on consoles. (images need to be copied to left and right buffers first, although they could be written directly to the framebuffer). The best approach is to deliberately limit the possible combinations (e.g. no dual rendering at all on consoles).

The Future for Stereo Experience Improvements

Defining the variables for the CryENGINE3 Renderer