The Screen Fader node allows to use cinematic punctuation devices of Fade In and Fade out in your Track View sequence.

Example: Fade in and Fade out used to begin the shot and transition to the next shot

The Screen Fader node can be used to fade in or out using a plain colour or a texture. It has the same properties as its Flowgraph equivalent (see below).

Changing the Luminance or Brightness value by using the Color Correction Node can create an effect similar to fading to black or white, but due to its low update rate it's better to use the Screen Fader in most cases.

To add a Screen Fader node:

A Screen Fader effect can also be triggered by using the Image:ScreenFader node. 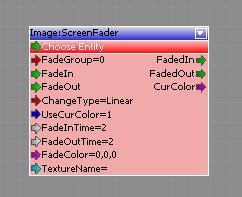 Most of the time it is better to use the Track View node, because you can see the screen fader effect while scrubbing or playing the sequence in the Editor.

The disadvantage is that it can't be used dynamically like its Flowgraph counterpart. In Track View you won't be able to adjust any of the properties based on the value of other variables.