Texture Maps are specified through the Material Editor and cover a wide variety of options. The available texture slots are often dynamic and depends on which shader is selected and which shader options are activated.

The Texture Map slot layout is fairly straight forward, the left colum displays which type of texture map the slot is associated with, the middle column is where the texture map file is place and on the right there are 5 buttons:

The decal slot has different functions depending on what kind of shader is used. It is activated with the Illum and Cloth shader.

Decal for the illum shader:

The Illum Shader is linked to the glow feature. Use it to add animated glow to your material without changing the diffuse map.

First, add a glow texture to the decal slot in the material editor. Then add a glow amount value to make the effect visible. Now you can see the glow texture on your model. You can use both black/white and color glow textures. 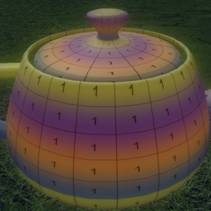 The glow texture can also be animated. To do this, set up the oscillator in the decal slot sub menu.

To make the decal glow texture visible on specific areas, paint an alpha map for it. Save the alpha map in the alpha channel of the diffuse map. White represents the area where the glow will be visible, and black will hide the glow.

Here is an example. The area where the glow is visible is controlled by a texture stored in the alpha channel of the diffuse map:

In combination with the cloth shader, you can occlude or illuminate your model by using an occlusion map as a decal. An example of this is adding dirt to cloth.

You can use any RGB texture. It will be blended into your diffuse map with a mode that is comparable to Photoshop's hard light blend mode.

The decal used will be tiled the same way as the diffuse map is tiled. If you change the tiling of the diffuse map, the decal tiling with also be changed.

All texture map slots have sub menus for controlling the rotation, offset, and tiling of the texture. They work the same in all map slots. 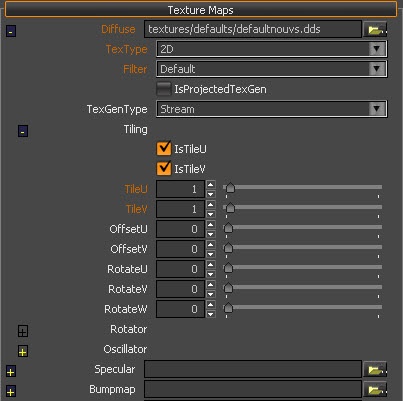 Here you can define what type of texture filtering you wish to use for this texture slot. Anywhere from Point filtering to 16x Anisotropic.

You can tile your texture for the U and V axis separately by using die arrow button, the slider, or the text field.

Note that you currently cannot tile normal or specular maps independently of the diffuse map. This is because of material instancing which saves many draw calls.

You can move the texture on the model in U and V direction separately. 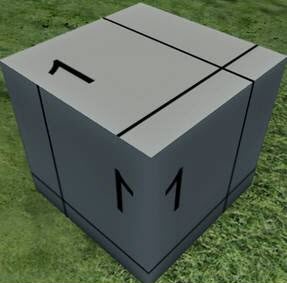 You can rotate the texture on a model in U and V direction separately. 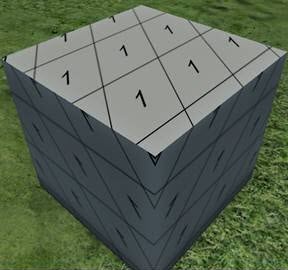 In the example the texture is rotated about 45 degree into U and V direction.

With the rotator you are able to create a rotating/shifting texture animation. Choose between three different types of rotation by clicking the option box. 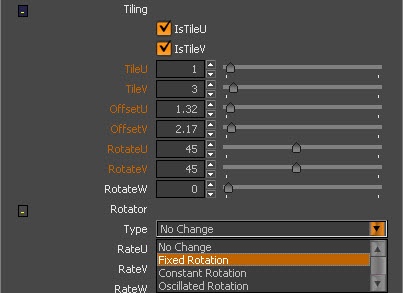 If you chose the rotation type, you can control its behavior by adjusting the rate, phase, and amplitude separately for U/V.

Like the rotator, the oscillator animates a texture. Choose between different types of oscillation.

The rotator and oscillator functions are only available for diffuse and decal textures because of technical limitations.