The third-person weapons are polygon-reduced versions of the first-person version, with helpers attached. The available attachments might differ from weapon to weapon.

To distinguish between first- and third-person weapons, add the suffix _tp to the object name; for example, rifle_tp.cgf

To ensure the perfect fit to the character, the weapon should be placed in the correct position and the pivot aligned to the weapon_bone's pivot (rotation and position). Then, the weapon can be rotated to 0/0/0 and placed in the origin of the world. 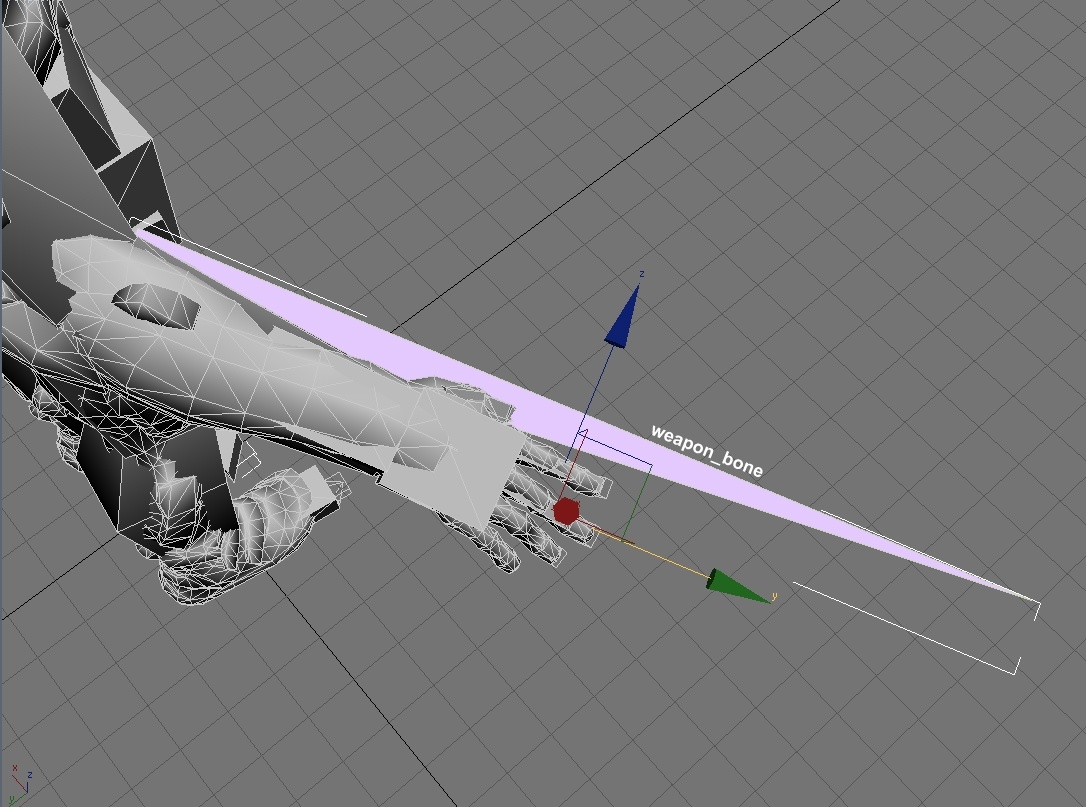 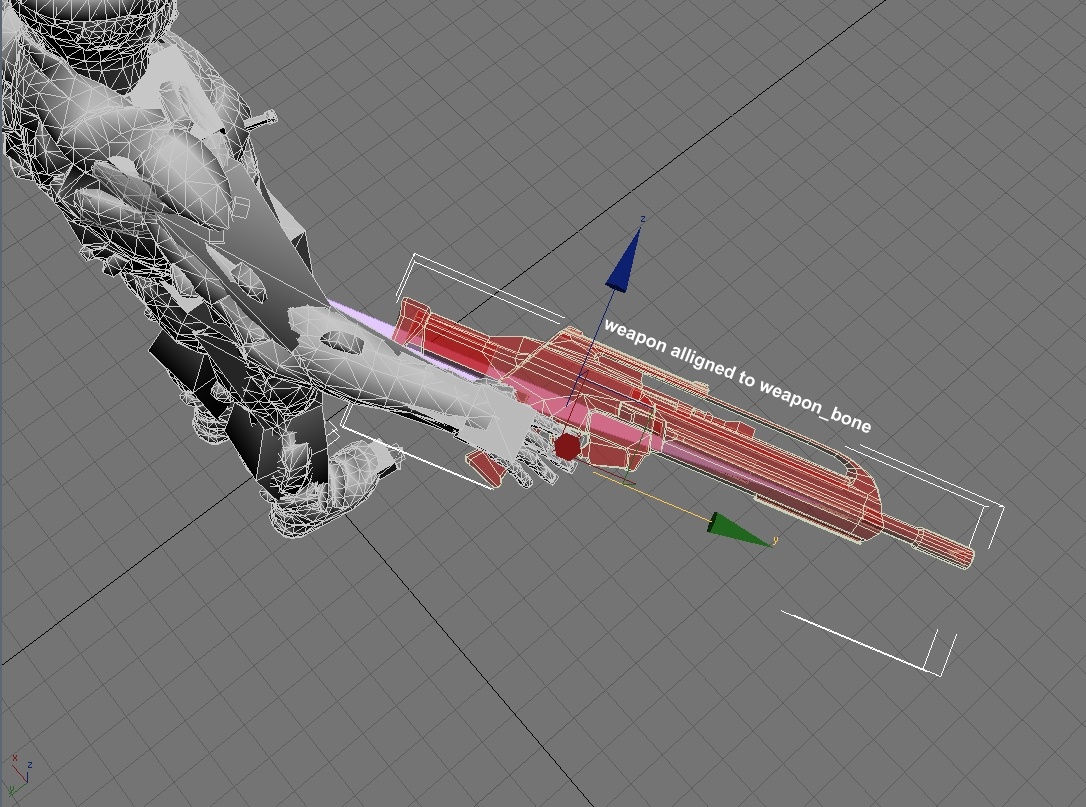 When viewed from the top view, the model and its pivot should face the positive y-axis direction.

The pivot position needs to be in the origin of the world.

The next step should be the creation of a proxy for the third-person weapon. First, you need a Mat ID for the proxy in the material. Therefore, you need to add a Mat ID in the Material Editor. 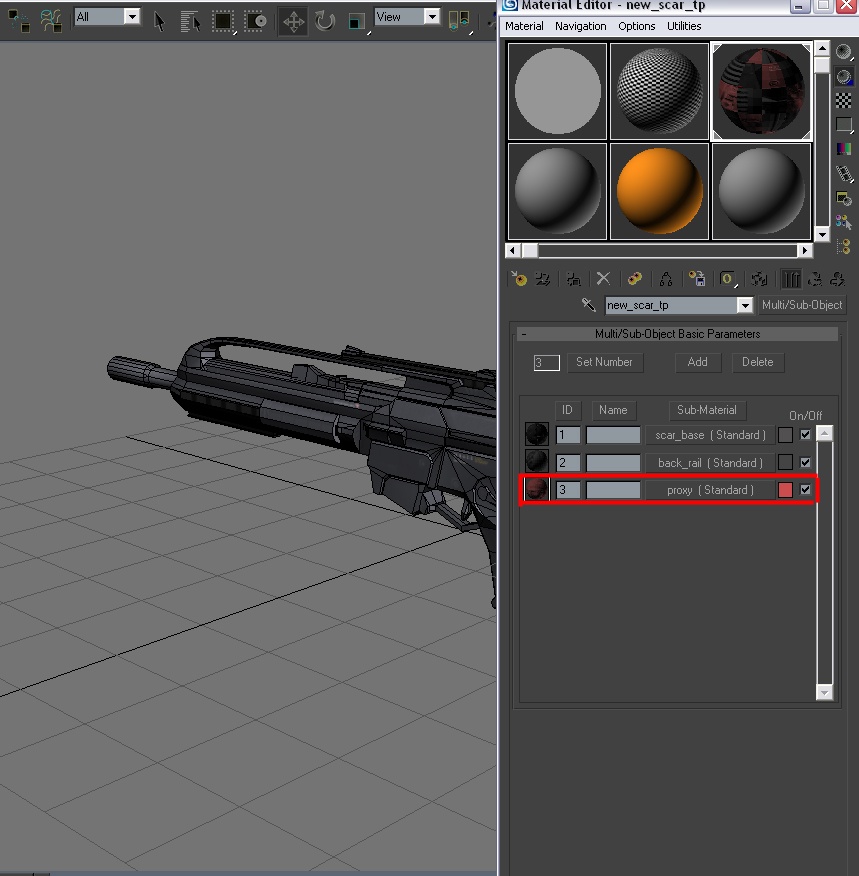 Select the Physicalize option and set to Physical Proxy (No Draw). 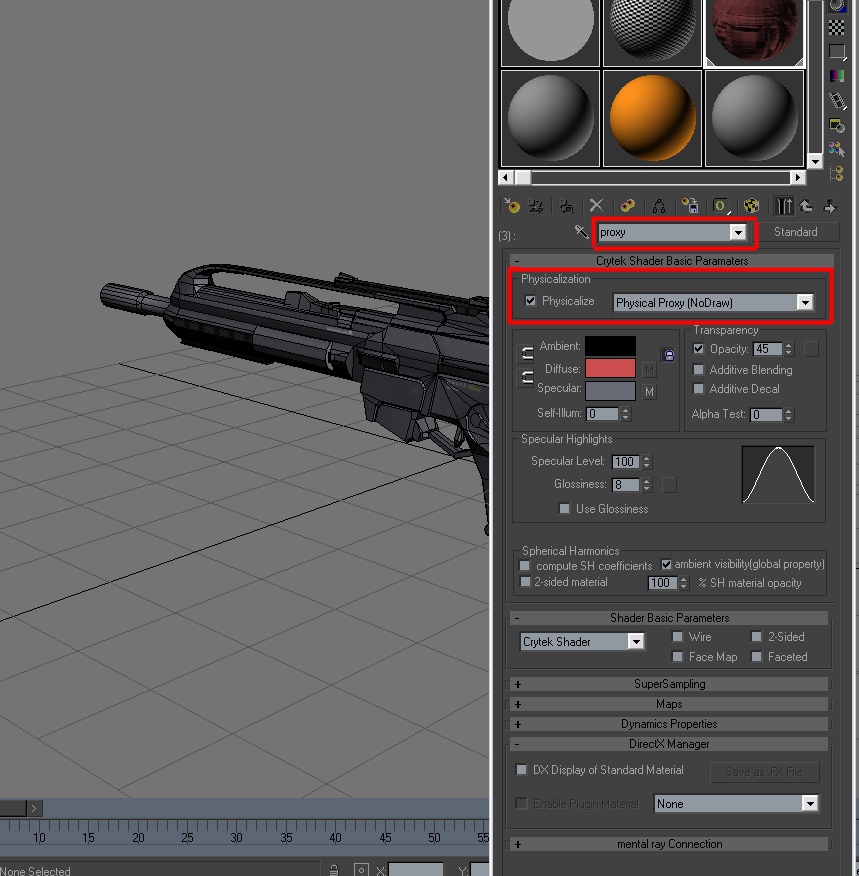 After setting up the material correctly, create the proxy mesh to the weapon model, set the right MAT_ID, set only one smoothing group for the proxy, and attach the proxy to the main weapon model. 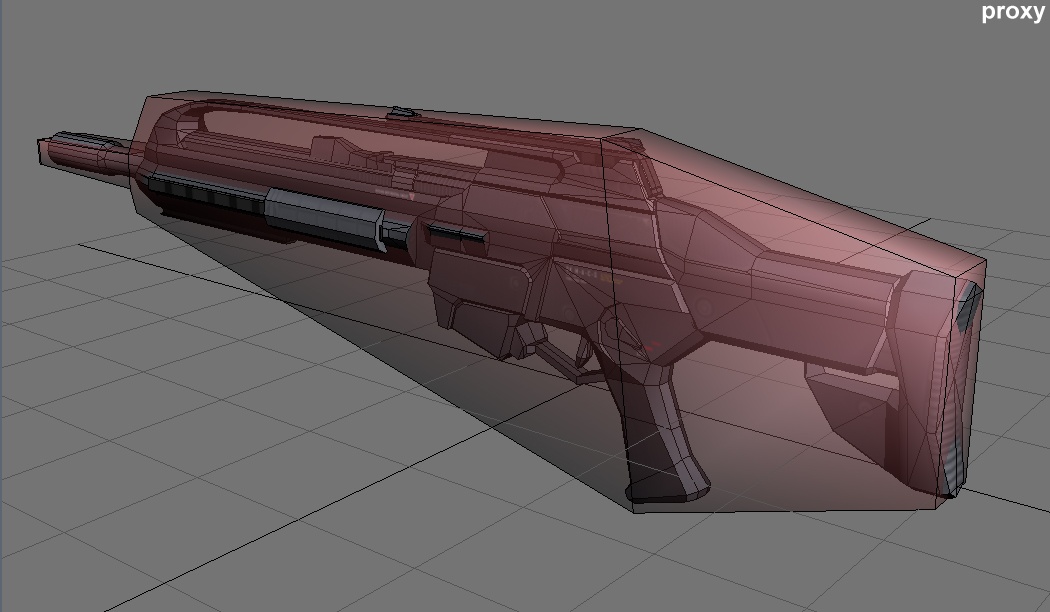 Adding helpers to the mesh: 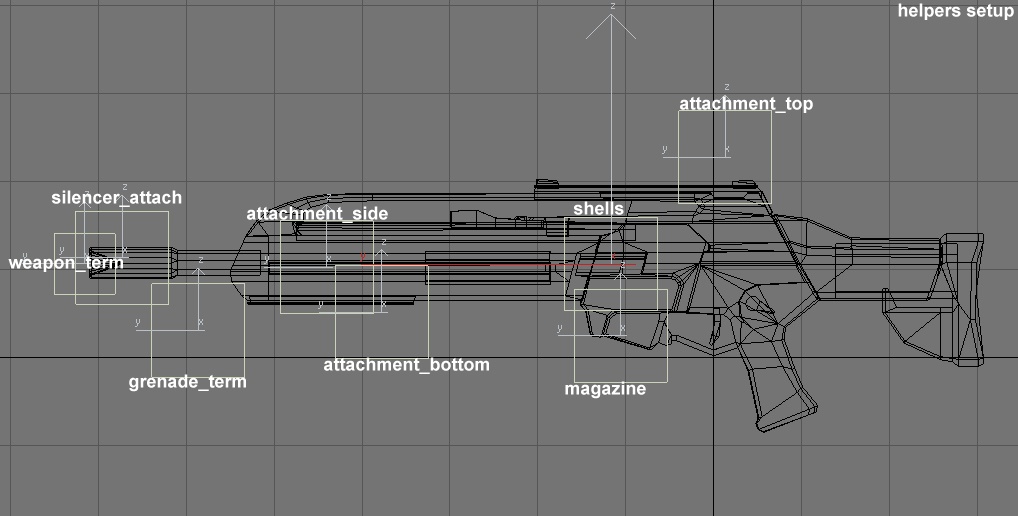 Create dummy objects (in 3ds Max, locators for Maya) as stand ins for weapon attachments in Sandbox. They must be oriented to the positive y-axis (refer to the image).

The following is a list of helpers from the Crysis game:

After you've correctly placed and named the helpers, you can check whether the positions of the helpers are bug free or not. For this, you have to merge an attachment with the Max file and align it to the helper that you want to later use as a reference point for this attachment. 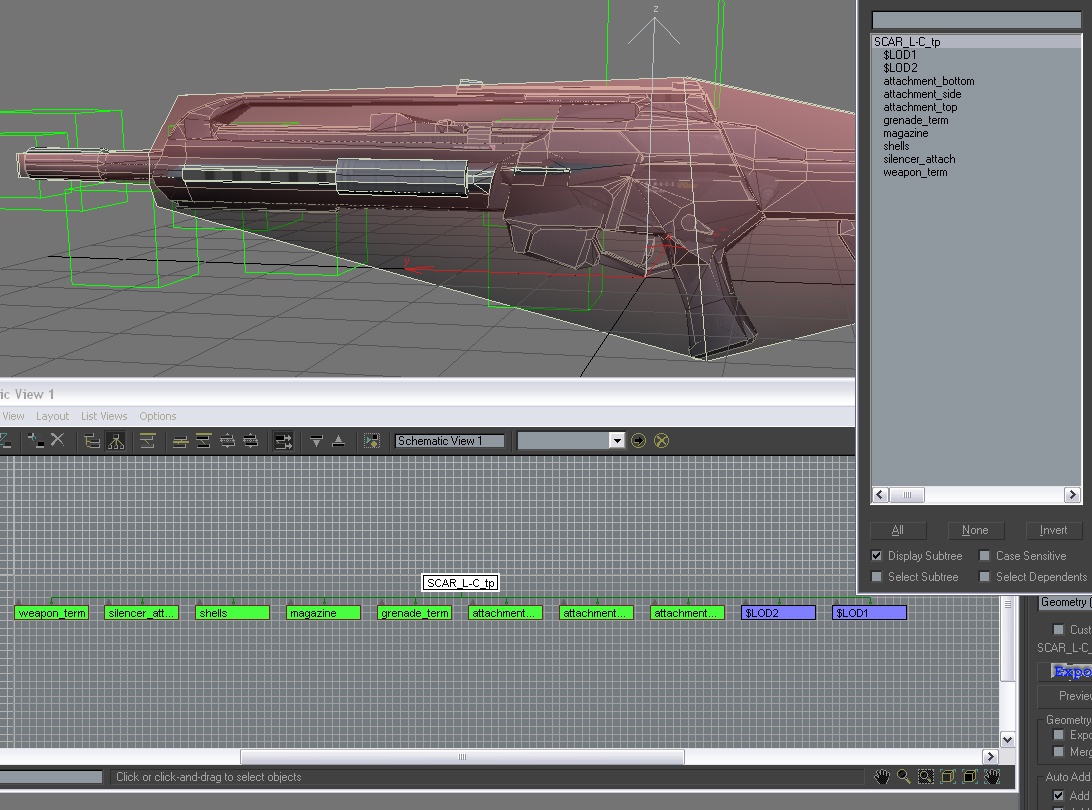 The next step is to add LOD's to the main model. Create LOD1 and LOD2 and link them to the base mesh. 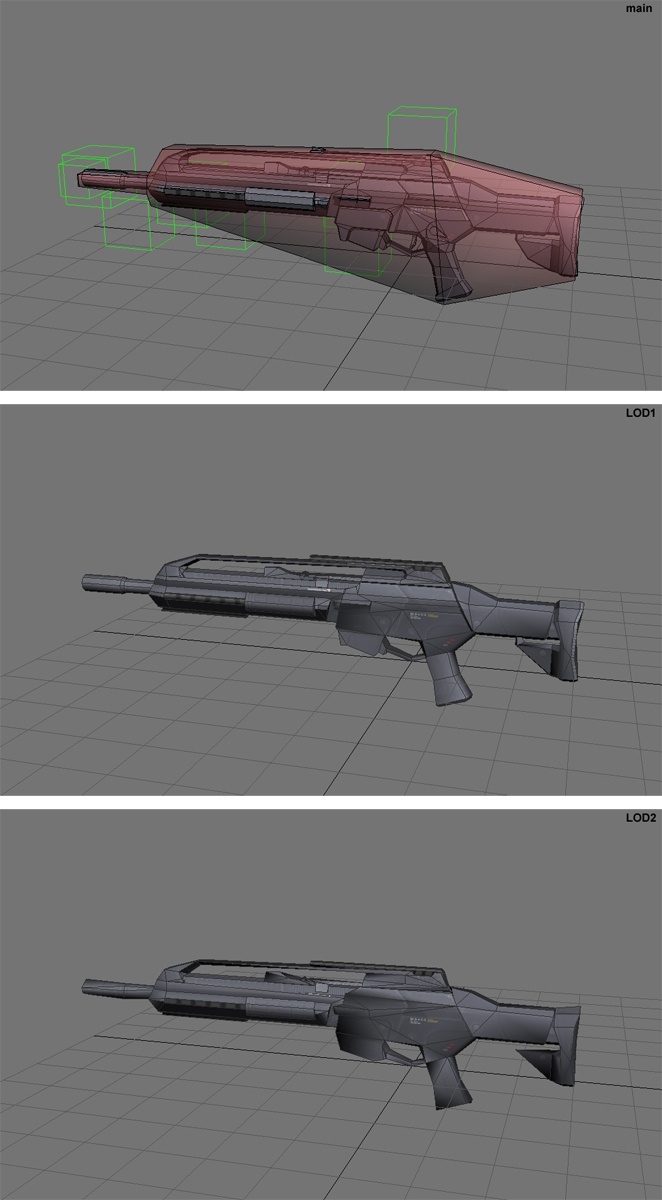 Export only the base mesh. If linked correctly, the LOD's and helpers will be automatically exported.

Deselect the Merge all Nodes check box in the exporter settings.

The object can be placed as a pickup in the level (as GeomEntity) or be chosen by scripts for the AI characters.