In this topic, you'll find solutions to common art asset related errors in CRYENGINE. The errors are sorted according to the Digital Content Creation (DCC) tool being used.

CRYENGINE expects a specific vertex index format to be provided for each asset. The specific format is compile-time selectable, it's either 16-bit or 32-bit (see vtx_idx in ProjectDefines.h), this would be considered the "Native" format, according to the engine.

In 99% of cases it happens when the build system is configured incorrectly, for example vertexindexformat is not used for RC calls.

After Making Changes to a CDF it Fails to Save

The Character Definition File is saved as normal, but when you reopen or reload it, it looks unchanged. This is because CDFs are cached the first time you open them, and no matter what changes you make, you will not see them until you completely close and reopen not just Character Editor, but the Editor itself.

This is a pretty ambiguous error usually stemming from the fact that the file does not exist in the path a CDF was looking for. In the case above, someone has moved the hands.chr from the path in the error to the Objects\Characters\Human\Hands directory without updating the CDF. When looking for these files, using Total Commander can help as it can search through PAK files.

LOD mismatch errors typically look like one of the following errors:

But sometimes there is an ambiguous error like this:

The first thing you can do is to open the Character Editor, load the character, and check the number of bones in the "Bone Attachment" drop-down list. Do this for the LOD as well. This gives you a good idea of how many bones are lacking or extra, and allows you to compare the numbers in each character.

The Rigging Tools have a function that will compare two hierarchies from two separate Max files and tell you the elements that are different.

LOD Mismatch Error for Every Bone in the Character.

Hierarchies Are Identical in 3ds Max but not in the Game.

The problem here can often be related to the Ignore Dummies flag being checked on one of the files. Remember that any hierarchy element prefixed with an underscore will not be exported, including its children.

This is a strange problem that can be fixed by re-exporting the model. You should never have duplicate bones unless you made a mistake naming them in 3ds Max (Max lets you have many nodes with the same name). If you have received this error while exporting a Character Studio Biped, then the file you have exported is corrupt (since there cannot be duplicated joints). Try reloading the file and re-exporting.

In CRYENGINE the standard is for characters to face the positive Y axis. Make sure that all characters fit this standard. Also check to make sure that the bone listed in the "Bone Export" lister is the root bone of your character and that it has no transformations applied to it. (Check that its rotation is [0,0,0])

This is a common problem with character heads, and the problem is in the exporter. If you have multiple objects queued up for export, or "Export File Per Node" selected, this can happen if they have a Morpher. The solution is to load each node individually and export them one by one using the "Custom Filename" flag and entering the name of the node.

This is an error generated by code and is not a problem with the asset. Please forward it to your Character programmer.

Make sure that you are pointing to the RC folder in the CRYENGINE Settings.

This means that CryTools told the exporter that there was something wrong with what you are about to export. Many CryExport .obj validation warnings are reminders, reminding you that you need to use a Crytek shader instead of a Blinn, for example. This warning can usually be ignored. This error will also be displayed if you have "suppress all warnings" enabled in the CryTools Control Panel, however, you will not get any of the actual warnings. They will be displayed on the console but their dialog boxes suppressed.

No Nodes to Export

This error message is displayed if there is no mesh added in the object export list.

This error basically means that no skeleton was exported to the Resource Compiler.

The most common related problem is that you are exporting a mesh that is not skinned to bones. If it is, save your character weights, reapply Skin or Physique, and then re-export. This usually fixes the issue. If you are sure the object is set up properly, check for other objects in the same scene that share the same name. 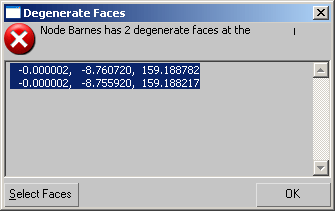 Material Not Set to Crytek Shader

You will get this error if something you are exporting does not have the Crytek shader applied to it. Objects being exported into the CRYENGINE should have this shader set under "Shader Basic Parameters" in 3ds Max.

It is good practice to not export things into the game that have transformations applied to them. This warning is just a reminder. Reset Xform will solve this.

The abnormal scale advice also applies to abnormal rotations. You should zero out rotations on your meshes/characters before exporting them into the engine.

You have deformable vertices in 3ds Max

You should always try to stay away from deformable verts, but sometimes they just erroneously pop in and though the joint still has <4 links, it thinks it is deformable. Our exporter will normalize any deformable vertices, so if you really do have deformable verts with >4 links these verts will be normalized on export and may look significantly different in the engine.

Character was not exported in Figure Mode

The character has to be exported when in Figure Mode or he will have some serious weighting issues in Character Editor. The screenshots above were taken to demonstrate this.

NOTE: Remember that the first frame of the current rigging animation looks exactly like figure mode.

Don't delete the directories, just everything in them.

You usually get this error when you export the .caf file in a path not mentioned in the CBA file for the specific character.

To change the path, change the line <Animation Path="exported folder in animations directory"/> in the .cba file.

Also, make sure that you have an Animations.cba file in the animations directory to avoid this error.

Note: The exporter traverses upward to locate the .cba file from the exported directory.

No Bones to Export

This error message is displayed if there is no bone added in the bone export list, or if the exported bone has an underscore before its name.

The Cry-Maya tools feature a validation tool which will help the user find issues which could result in errors or simple confusion. Many of these have been noted below.

These occur when the Maya scene is missing any assets with group nodes which lack proper naming and or group nodes setup.

This occurs when the Maya scene does not have the desired preferences which are used in CRYENGINE. These are for the users recommendation in order to prevent further confusion in the future.

This can mean multiple things but in most cases it is because a character was not bound to a rig before export.

The scene must be saved before you can export.

Number of indices of node 'p'

You usually get this error when you export the .caf file in a path not mentioned in the CBA file for the specific character.

To change the path, change the line <Animation Path="exported folder in animations directory"/> in the .cba file.

Also, make sure that you have an Animations.cba file in the animations directory to avoid this error.

Note: The exporter traverses upward to locate the .cba file from the exported directory.

No Bones to Export

This error message is displayed if there is no bone added in the bone export list, or if the exported bone has an underscore before its name.