Voxel Objects have been deprecated in CRYENGINE 3.5 and beyond.

Voxel Technology allows you to create complex 3 dimensional organic meshes in the editor. It is exposed in the editor through the use of Voxel Objects.

Every Voxel Object has an internal 3D grid of voxels (usually 32x32x32 elements). Every element contains information such as if the unit is full or empty, what surface type is being used and what the base color is.

This array is used as input for the mesh generator. During editing the designer modifies an array of voxels and every change causes re-generation of mesh so the designer receives immediate visual feedback. Voxel Objects can be used in both outdoor and indoor situations.

After completing this tutorial, you will be able to create an overhanging cliff and a cave using voxel technology.

Creating a Cliff with an Overhang

Voxel Objects can be used together with the heightmap to improve the look of the terrain. It is possible to model entire terrain purely using Voxel Objects, but it is much more efficient in memory usage and rendering speed not to.

It's best practice to model most of the terrain with a heightmap, and then use Voxel Objects to add nice features to it.

Setting Up the Voxel Area

To start, it is useful to turn on the visual display of terrain sectors grid by typing e_TerrainBBoxes 1 into the console. This will cause blue bounding boxes depicting the terrain sectors to appear in the perspective viewport.

Your first step is to create a cliff. Create a hill that looks like the one in the next image.

The simplest way to do this is to activate Snap to grid before placing the Voxel Object. The size of the grid should be set to 64 meters, which is the size of a terrain sector. 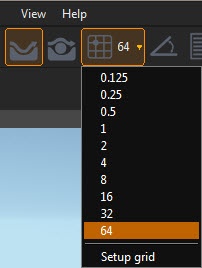 Now, go to the RollupBar and select Misc and then VoxelObject, and drag a new Voxel Object into the level. 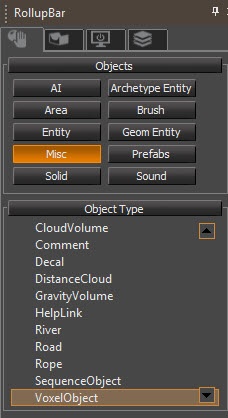 Initially, the Voxel Object will be empty and you will see only its empty, red box helper object.

Visually, there should be no difference apart from the blinking of the currently selected Voxel Object. 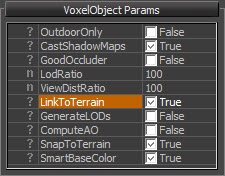 ComputeAO In case of Voxel Objects - Ambient Occlusion is a value pre-calculated for every vertex. This value says how open or how occluded this vertex is relative to environment around.

By default during lighting calculations this value just modulates ambient color for the vertex. This feature can be activated in Voxel Object properties by enabling ComputeAO checkbox.

Here you can see cave scene (with one light source):

In the RollupBar, go to Terrain -> Voxel Painter, and set the type to Create. Now, start adding overhanging geometry to the top edge of the cliff by clicking where you want to draw voxels.

To begin, it may help to increase the size of the Brush Radius to 25 and the Voxel Size to 16. This will help the results to be very visible.

In addition, using the Align Plane functions is good for controlling the geometry you create.

Try to create an overhang like the one in the following picture. 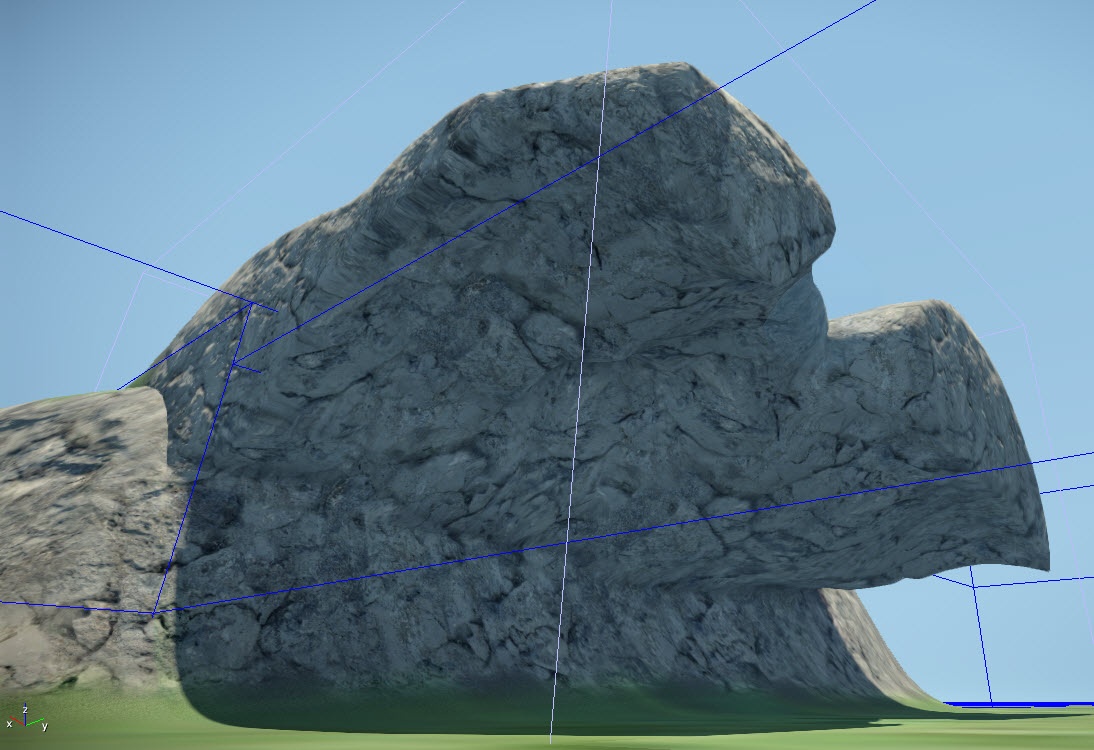 This example shows how to make a cave in the same small hill. First, place a Voxel Object over the desired area, as you did previously. In order to go under the terrain surface, you need to tell the game's physics engine that you want to have a hole here.

In the RollupBar, go to Terrain and then Holes and make a hole in the area where you want to make the entrance to the cave. Please note that this will be a change only in the heightmap, not the Voxel Object. 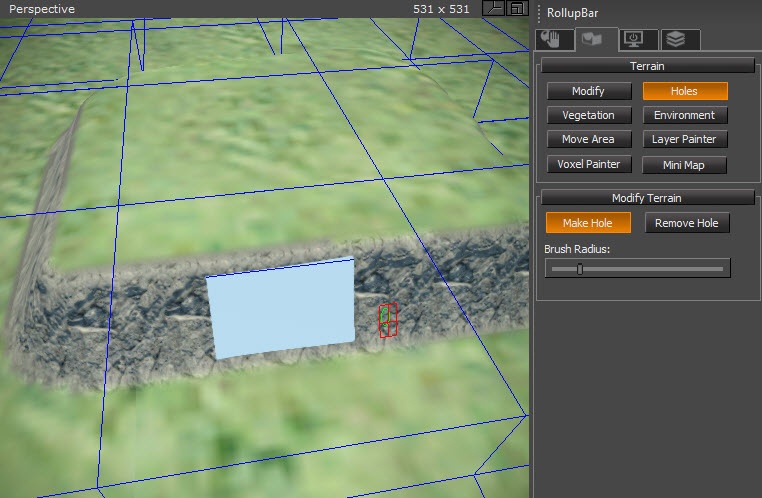 The difference between making a cave and the previous example, is that the LinkToTerrain option will not allow us to create a hole under the terrain, as it only allows you to add features on top.

Instead of using LinkToTerrain, use copy heightmap data. In this way you will have full control over this area using the Voxel Painter tool.

Select Voxel Object, make sure that LinkToTerrain is selected, and press the Copy Terrain into Voxel button in the Voxel Object properties.

The hole in the heightmap that you painted earlier will be not visible anymore – the Voxel Object has covered over the original (hole-less) terrain sector. 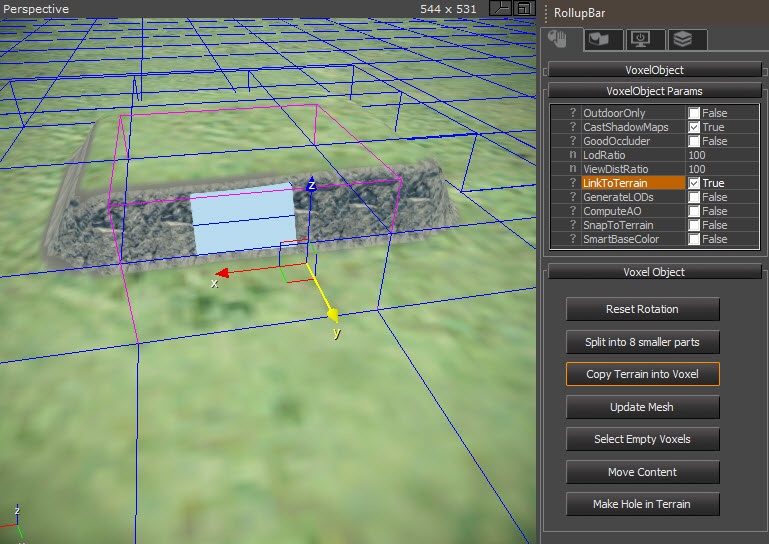 Now you can start making the cave. In the RollupBar, open Terrain and then Voxel Painter, select brush type Subtract.

Make a cave by keeping click holding while moving on the area where the hole should be. Again, using the Align to plane function here can be useful. 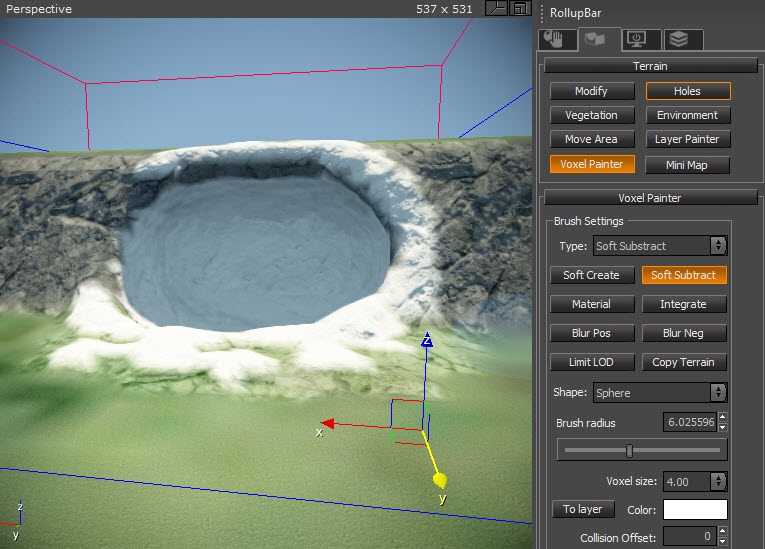 Changing the Material of a Voxel Object

In Brush Settings, select Material from the Type dropdown box, then select one of the materials in the surface types box. Now you can paint on the voxel area by clicking the mouse button.

In the same way as cliff materials are used for usual terrain painting, materials that are painted on voxels should have 3 sub-materials, one for each of the x, y, and z axes.

So as a base let's use the following material: materials\terrain\cliff_grey_3d.

If needed, you can make a new layer in the Terrain Texture Layers window, or use an existing layer for the voxel object. 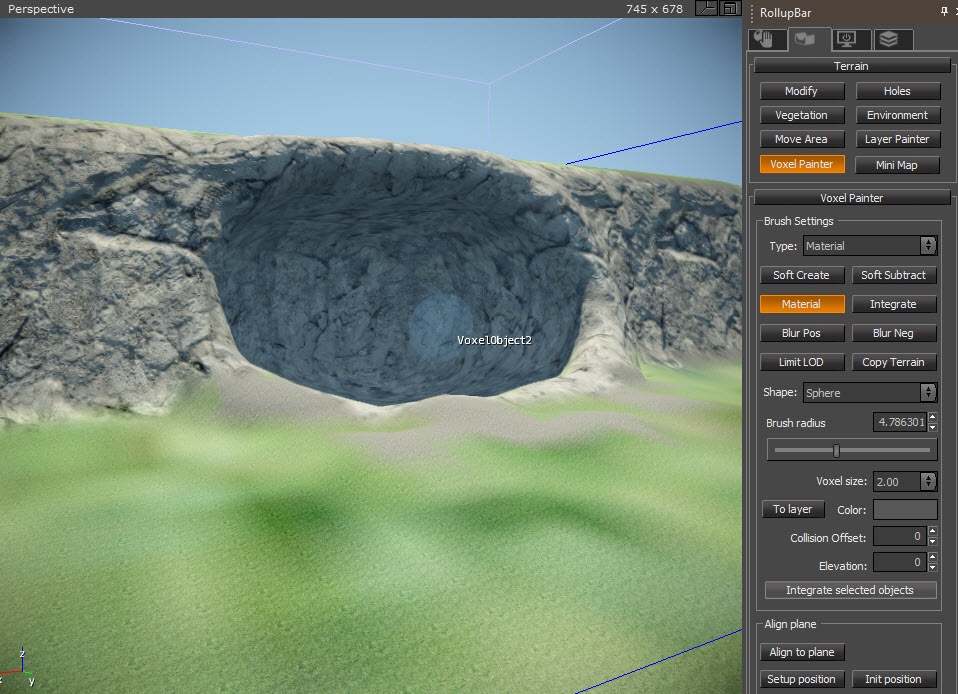