The WaterSurface Shader is used to create indoor water volumes and rivers. 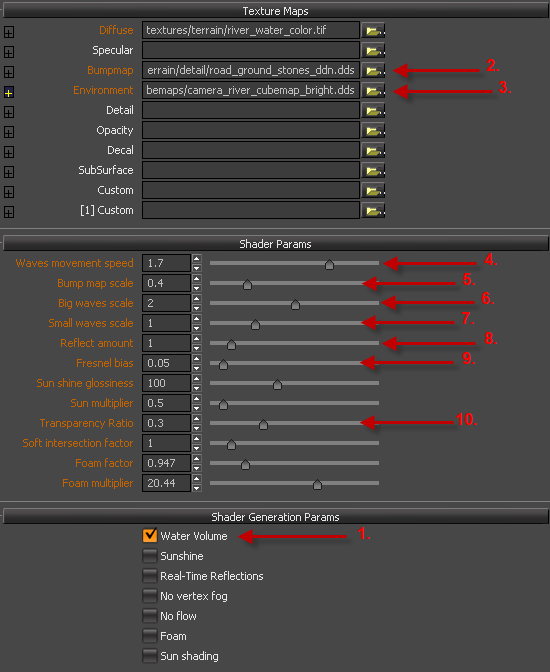 1. The Water Volume helps with creating the water shader for indoor water volumes and river rendering. It requires a cube map.

2. Bumpmap is used to create the waves and ripples on the surface of the water.

3. The Environment slot is using a cubemap for the Water Volume.

5. Bumpmap Scale makes the waves and ripples, which are created by using the Bumpmap, look bigger.

6. Big waves scale scales the big waves on the bumpmap. Only works if the BumpMap Scale >0.

8. Reflect amount changes the amount of reflection on the water surface. The higher the number, the bigger the reflection. 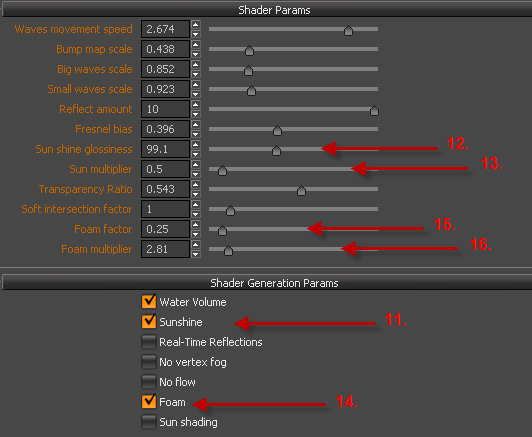 12. Sun shine glossiness determines how glossy the water surface is. The lower the number, the shinier the water becomes on a bigger area.

13. The Sun Multiplier sets how strong the reflection of the sun is visible.

14. Foam enables Foam rendering. Only on High and VeryHigh Specs.

16. Foam multiplier sets the visibility of the foam amount controlled by the Foam factor. The higher the number the less transparent the foam is. 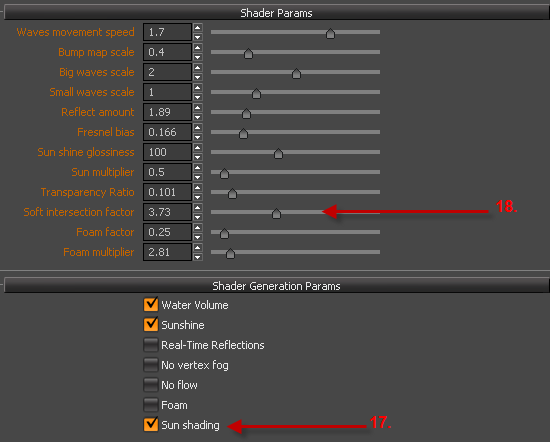 17. Sun Shading enables Sun Shading. Use it when the water surface is outdoors. Creates an overall lit surface for the water.

No Flow, No Vertex Fog and Real-time Reflections

20. No vertex fog disables fog per vertex. Can be useful when the fog is otherwise too much.

21. No flow stops the directional movement of the water. It will look like a lake with all the reflections and sunshine and waves moving in the same place.