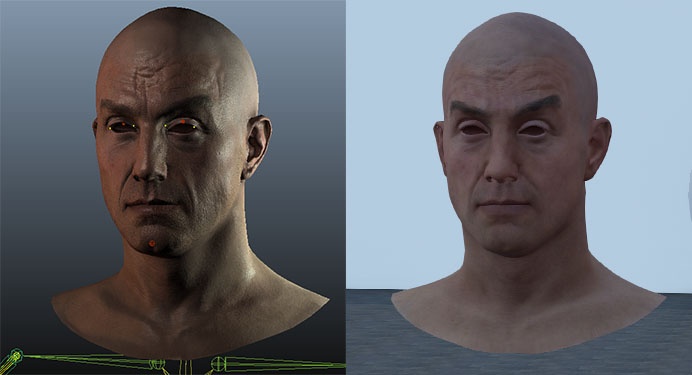 Normally, wrinkle maps are added to a blendshape animation to add details to a human face. CRYENGINE currently supports 12 wrinkle masks and 1 wrinkle normal map that are controlled by 4 "blend_control_01" to "..04" joints (as helper objects to hold the animated data when a wrinkle area blends in and out).

CRYENGINE looks for the exported joints "blend_control_01" to "..04" and their ".translate" attribute and blends the wrinkle masks in and out.

(Do remember that you still need to have a modified "SkeletonList.xml" where you have added the skeleton CHR from this tutorial. Just in case you want to skip all these steps and want to open the character in CE Character Tool: SkeletonList.zip )

Backup your "SkeletonList.xml" before overwriting it!

This is not an in-depth tutorial on how to sculpt your high resolution and in-game meshes! Normally, your high resolution wrinkle sculptures would be based on your neutral-posed sculpture in ZBrush, MudBox or 3d-Coat. After that, you have to bake the wrinkle normal maps. What is shown in this article are the results you need and the current way that CRYENGINE handles the base Normal Map (left image below) and the Wrinkle Normal Map (right image below): 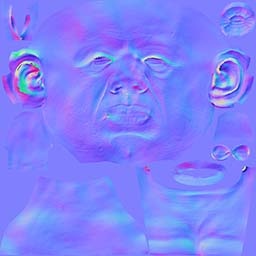 Depending on your workflow, you must combine the different wrinkle normal maps onto the base normal map.

Before you blend normal map layers in Photoshop using the "Overlay" blend mode, you may want to search Google for how to correctly combine normal maps

This tutorial is designed to demonstrate the tech, hence some elements shown such as a perfect wrinkle normal map may not be as they would be in a game production environment

The mask texture being used to define the areas and ranges to be influenced by wrinkles is an 8-bit per channel, 32-bit *.tif file (this includes the alpha channel).

The different channels, red, green, blue and the alpha channel have been split into ranges so that more than 3 or 4 channels can be addressed independently and drive different areas on the face. Therefore, you have 12 wrinkle areas that you can control.

Presently this is "hardcoded", so if you use more than 3 Channels per map channel, then code changes will be necessary.

The 1st column depends on your preferences and how you as a Setup Artist want to drive the blend_control_01 - 04 helper joints. CRYENGINE just reads the translate values of blend_control_01 to 04 to drive the wrinkle mask. This is all that CRYENIGNE needs, however make sure that you map the driver attribute to the range of values [0.. 100], such as using a "multiplyDivide" node as in the former Animated Blendshape Tutorial:

Setup Table for the Photoshop/Texture Artist

Open Photoshop and paint the masks according to the color ranges in the setup table for Photoshop/Texture Artist. For the mask in this tutorial Red 255 has been used for the cheek mask, a Red 170 for the nose wrinkle mask and a Red 75 for the forehead mask.

But set the right background color displayed below when you paint the fade in/out mask edges:

How to Paint the Mask Ranges in Photoshop:

If you have problems in removing the sharp edges of the mask (you'll notice them later on in CRYENGINE), then reduce the image resolution of the mask texture! e.g. Wrinkle Normal Map: 2048 x 2048 -> Wrinkle Mask: 512 x 512

This is how the final result for the RED masked area looks like in Photoshop: 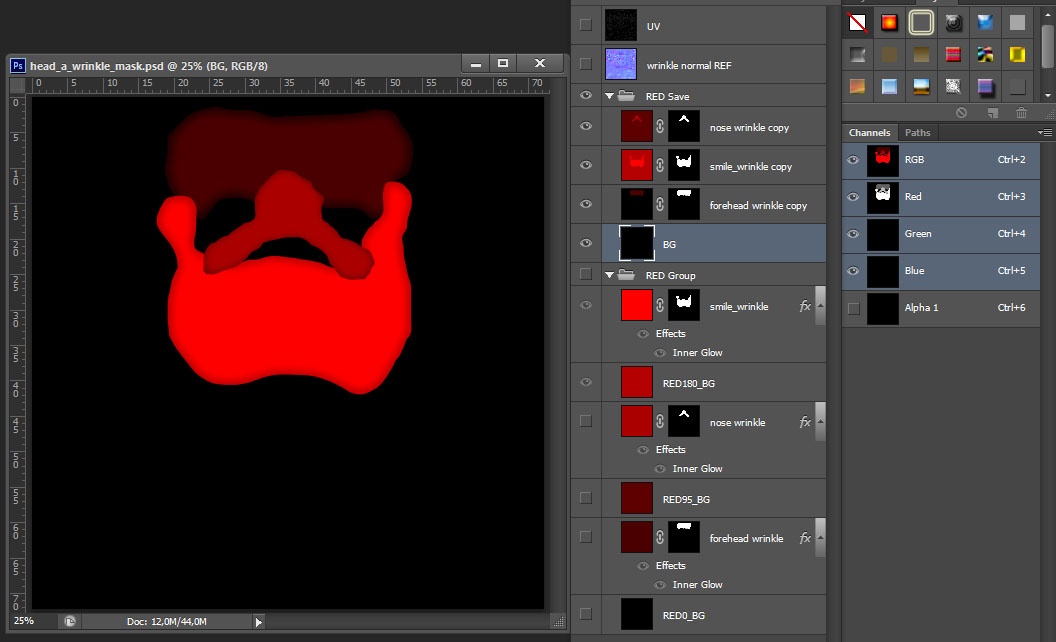 The following steps show you how to create a material for wrinkle maps in the CRYENGINE Material Editor and add an "AnimObject" in the Sandbox Editor.

In this tutorial you have;