This article details the versions of Visual Studio required to build certain components of CRYENGINE for Windows.
Note that Visual Studio integrations for other platforms are not considered in this article, but they may limit your choices with regards to Visual Studio versions to use.

Like Sandbox only runs on 64-bit Windows, we support development only on 64-bit Windows OS.
This means that we expect to use the 64-bit hosted tool-chains for Visual C++.
To clarify: 32-bit Windows is supported as a target for the launcher (and for running CRYENGINE games on), but not as a host for compilation.

Please note that for Visual Studio SKU's of the type Ultimate and/or Enterprise are treated as Professional for this table.

The items marked with

are partially supported, some plugins or features may not be available when using this version of Visual Studio, because 3rdParty dependencies may not have made available libraries compatible with this Visual studio version.
Please refer to the release notes of the particular version of CRYENGINE for details on limitations for specific versions of Visual Studio.
For 3.8.4: Important 3.8.4 Code and Data Changes

Here is an example of a working installation for CRYENGINE: 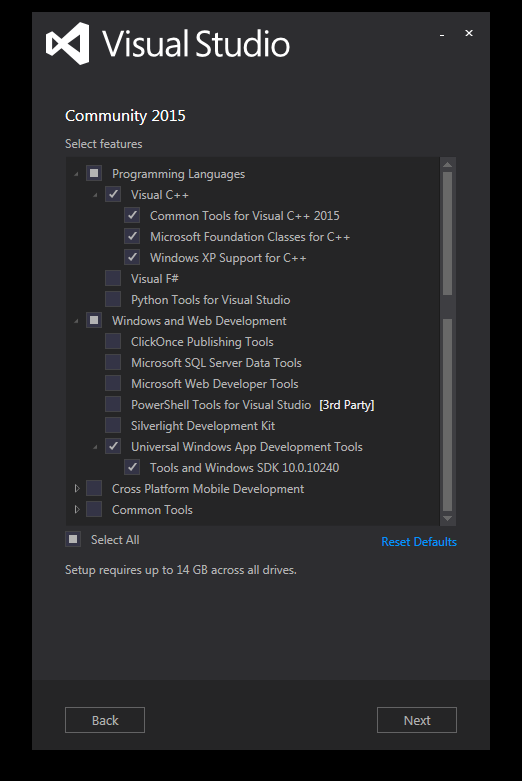 The following Windows SDK versions are supported for each supported compiler. It's strongly recommended to use these combinations, as these are the officially supported scenario's by Microsoft, and mixing differently may lead to problems.

Please note that when using Visual Studio Express editions to compile CRYENGINE code, you need to have a Windows SDK installed.
This means that you should pick the "for Desktop" variants when downloading Visual Studio.

Please note that when using Visual Studio Community editions to compile CRYENGINE code, you need to have a Windows SDK installed.
Usually, this can be installed or added afterwards when setting optional packages in the Visual Studio installer.

This item only applies to WAF starting with CRYENGINE 3.8.4.
For previous versions, you may want to copy the dependencies manually.

When WAF builds certain projects, it will attempt to copy redistributable DLLs from either Windows SDK or from Visual Studio installation folders. These steps are optional (the build will not fail if the files are not present), but it's strongly recommended to include them for each of testing and automatic dependency selection.

Please consult the following table, to see where WAF will attempt to locate redistributable files.
In general, if a file is missing, a warning will be generated. In this case, consider changing/upgrading your Visual Studio or Windows SDK installation.

The remainder of this chapter applies to CRYENGINE version 3.8.4 and newer.

The build system distributed with CRYENGINE is WAF, and it supports the above configurations. There are configuration options to control which version of Visual C++ compiler and/or Windows SDK is used for compilation, if the defaults do not work for your project. For the remainder of this chapter, please note that we will use "MSVC" to indicate a Visual C++ compiler installation, identified by a version number as shown in the table above in the column "Visual C++ version" (specifically, we don't refer to the Visual Studio version number, such as 2012 or 2015).

The options that control the WAF compiler selection are stored in the _WAF_/user_settings.json file, and can be set using the WAF options dialog.
All of these options can be found in the "Compiler Detection" tab.

Now, we will explain the default logic for selection, which may help trouble-shooting an inoperable WAF configuration.
By default, the selection of the MSVC version to use is done by the following logic:

Then, after MSVC is selected, WAF will select the Windows SDK version:

It can be hard to find out why WAF does not work as expected given a host configuration with various versions of MSVC and Windows SDK installed.
To make it easier to find out why a problem exists, an option has been added to explain the selection logic used by WAF.

To view the extended output, open a command prompt with the current directory set to the CRYENGINE root folder, and then run:
cry_waf.exe configure --auto-detect-verbose True --generate-vs-projects-automatically False
WAF should provide output detailing the decisions made during configuration of MSVC and Windows SDK as explained above.

If the problem remains, open a support ticket, attaching at least the output of the above command, and the expected behavior.
Note: Only the combinations listed in the table above under the heading "Windows SDK versions supported" are directly supported by Crytek.

After changing the configuration of MSVC or Windows SDK, it's possible that existing temporary files are causing problems.
Consider using "Clean Solution" from Visual Studio before building the first time after switching MSVC versions.

Because WAF supports various versions of MSVC, the dependencies of the compiled projects can be different depending on which version of MSVC is used during compilation. WAF will automatically attempt to copy appropriate dependencies (as listed under "Note regarding redistributable libraries") when the project is compiled. However, installations of Visual Studio as well as installations of Windows SDK do not always include the redistributable libraries (they are optional, and disabled by default). We recommend updating your installation to provide these libraries to prevent run-time issues on other machines.

In the case where the installer of your game will install the appropriate redistributables along with the game, it is safe to ignore those warnings.
Note: Redistributables for debug-configuration builds do not exist, and such builds can only reliably be run on the machines with that version of MSVC installed.

For users of Visual Studio 2015, please note that the current distribution of MSVC seems to not include the MBCS version of the MFC libraries, no matter what configuration is selected during installation. This appears to be an oversight in the installer.

As a workaround, it's possible to copy mfc140.dll and mfcm140.dll into VC\redist\x64\Microsoft.VC140.MFC folder (from Windows\System32), which should be available on your system if you selected the MFC optional package during Visual Studio installation.

This is only required when building the editor project.