If you want some files for reference, please download and unzip the tutorial files as described on this page.

Before you continue with this tutorial, make sure to have read and understood the following

Setting Up the Maya Scene

The goal of this section is to create a poly cylinder and a dummy triangle poly mesh and two joint hierarchies in Maya.

Set up your Maya scene and save it to an appropriate directory, for example YOUR_PROJECT_FOLDER\Assets\Objects\current_tutorial. Be sure that the folder containing the Maya scene and exported files for CRYENGINE is a sub-folder of your project folder. In our case, we saved the Maya scene files in this directory:

Create the joint hierarchies and smooth skin two geometry object to them:

For this tutorial we will create a poly cylinder skinned to a joint chain. This joint chain can be used for two very distinct use cases:

We assume you to have at least some experience with Maya. We will post some images showing the interim steps and the final resulting scene.

I. Creating the pony tail joint hierarchy and a poly cylinder:

III. Smooth Bind the poly geometries to its skeletons:

IV. Add some animation to the primary skeleton you want to extend:

We want to animate the "head" joint of the base skeleton, so that later when we add the physics procedural/secondary animation, it is derived from this (head) joint movement. Press the Play button in Maya to see the results
(File: ponytail_skeleton_step06.ma)

Prepare the Maya Scene to export to CRYENGINE

The goal of this section is to show you how to create the necessary nodes for CRYENGINE *.chr, *.skin & an *.i_caf animation file export.
(File: ponytail_skeleton_final.ma) 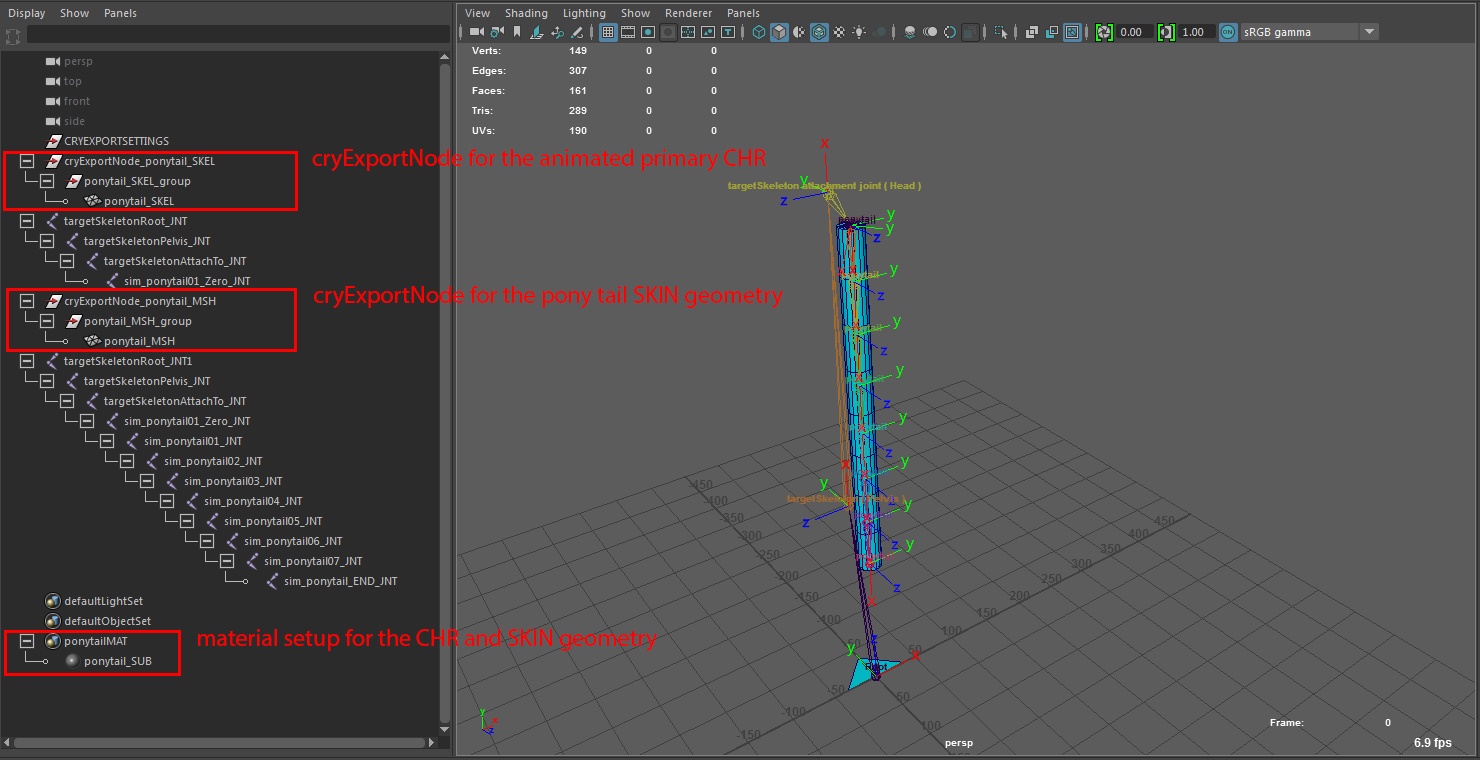 Pic12: This is what the final hierarchy looks like

Create the cryExportNodes for the CHR base skeleton and the SKIN pony tail extension:

In this section we need to create the cryExportNodes, materials, etc. for the Maya to CRYENGINE Export and create the *.chr and the *.skin file in the final location of any CRYENGINE asset.

Material setup for CRYENGINE in Maya

Use the standard workflow to create a Material Group (a Maya Set) with sub shaders parented to it. We will define some random colors to a standard Blinn shader and add it to a CRYENGINE Material group. Don't forget to export the material to a *.mtl file in your project folder. 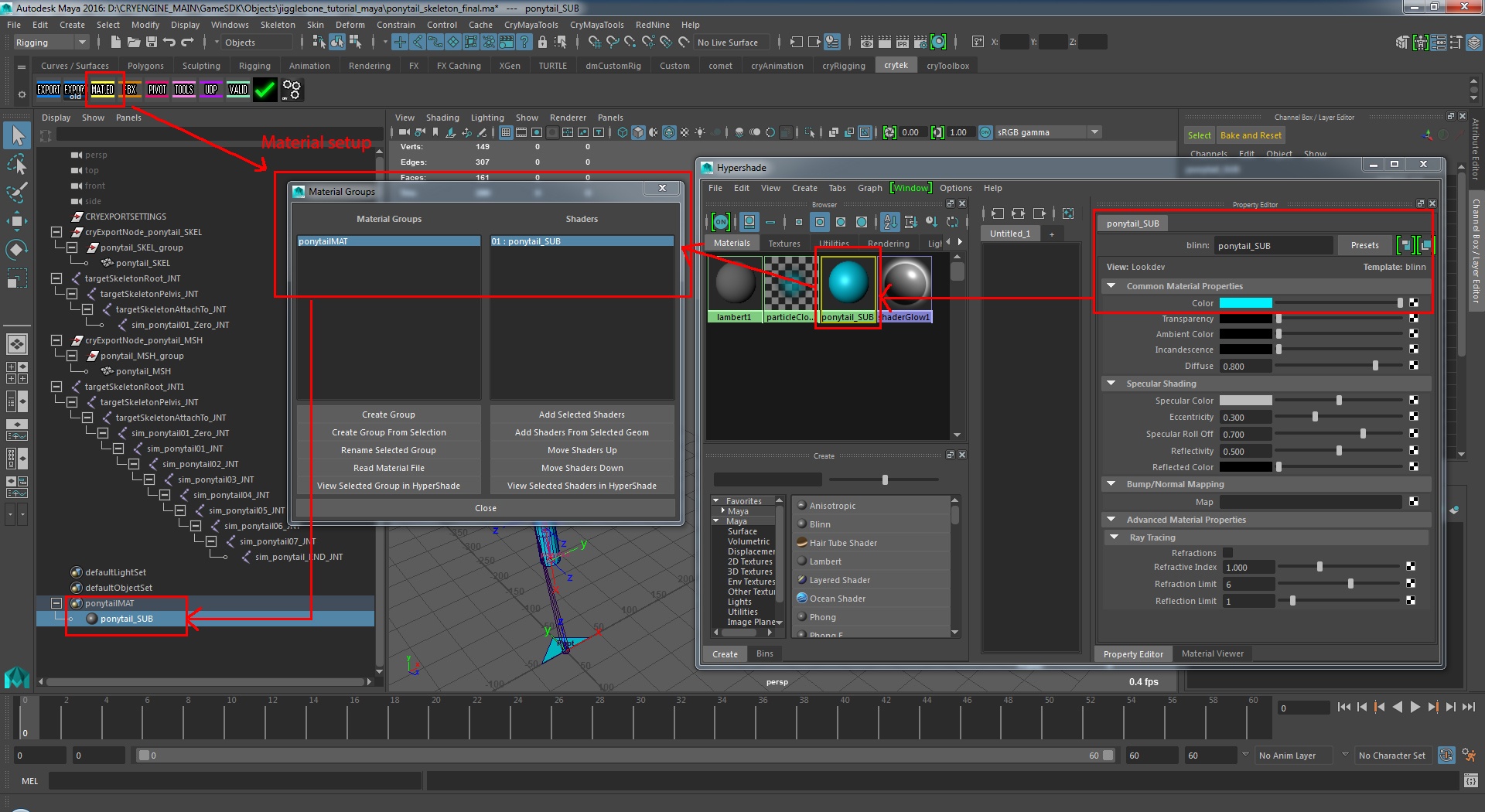 Pic15: Overview of a standard Blinn material applied to a scene ready for CRYENGINE export

We still have the name clashing issue for the root joint of the primary base skeleton (character CHR file) and the secondary extending skeleton (pony tail SKIN file). 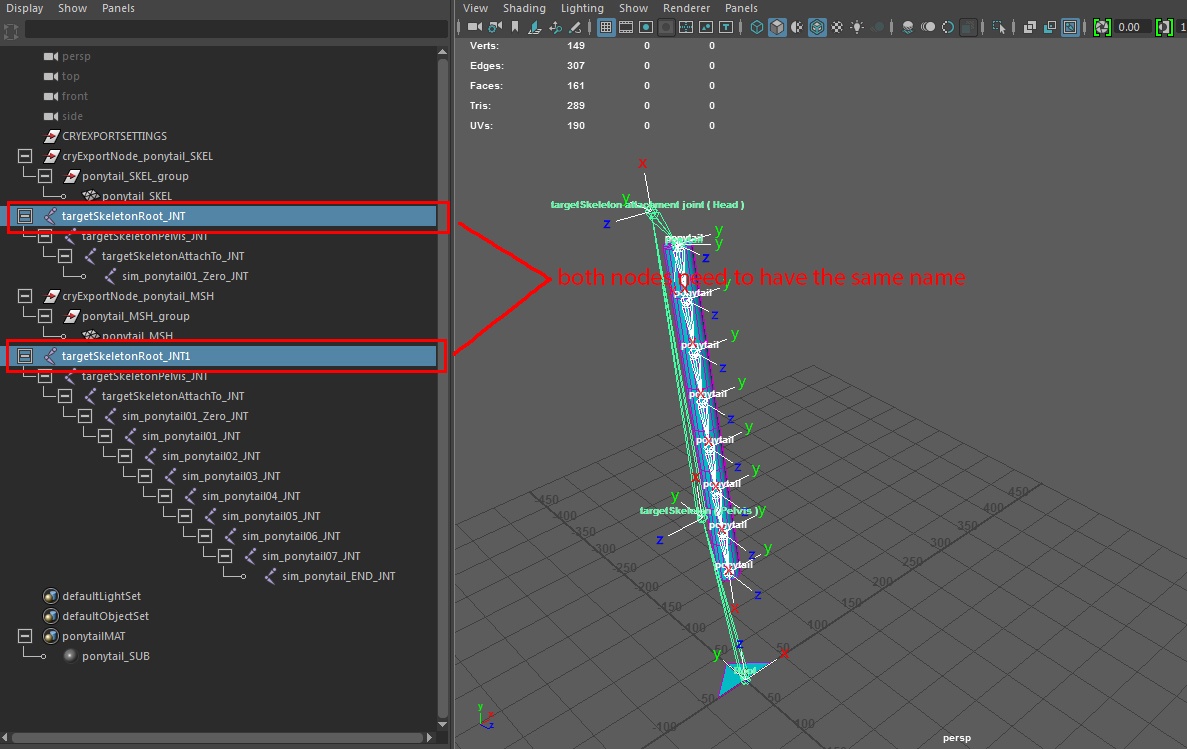 Pic16: When we try to give both nodes the same name, Maya automatically renames one of them, because of clashing names.

To solve this we will remove the duplicates and save each cryExportNode and its skeleton hierarchy to a new file, so we end up with two files harboring a CHR and a SKIN cryExportNode.

I. CHR base skeleton scene

Start by loading the "ponytail_skeleton_final.ma" file. There we we remove all pony tail SKIN related nodes and save the scene to a new file. From here we export the CHR file and also the "default" animations show below. Use the Crytek shelf -> Export button to export your *.CHR file. 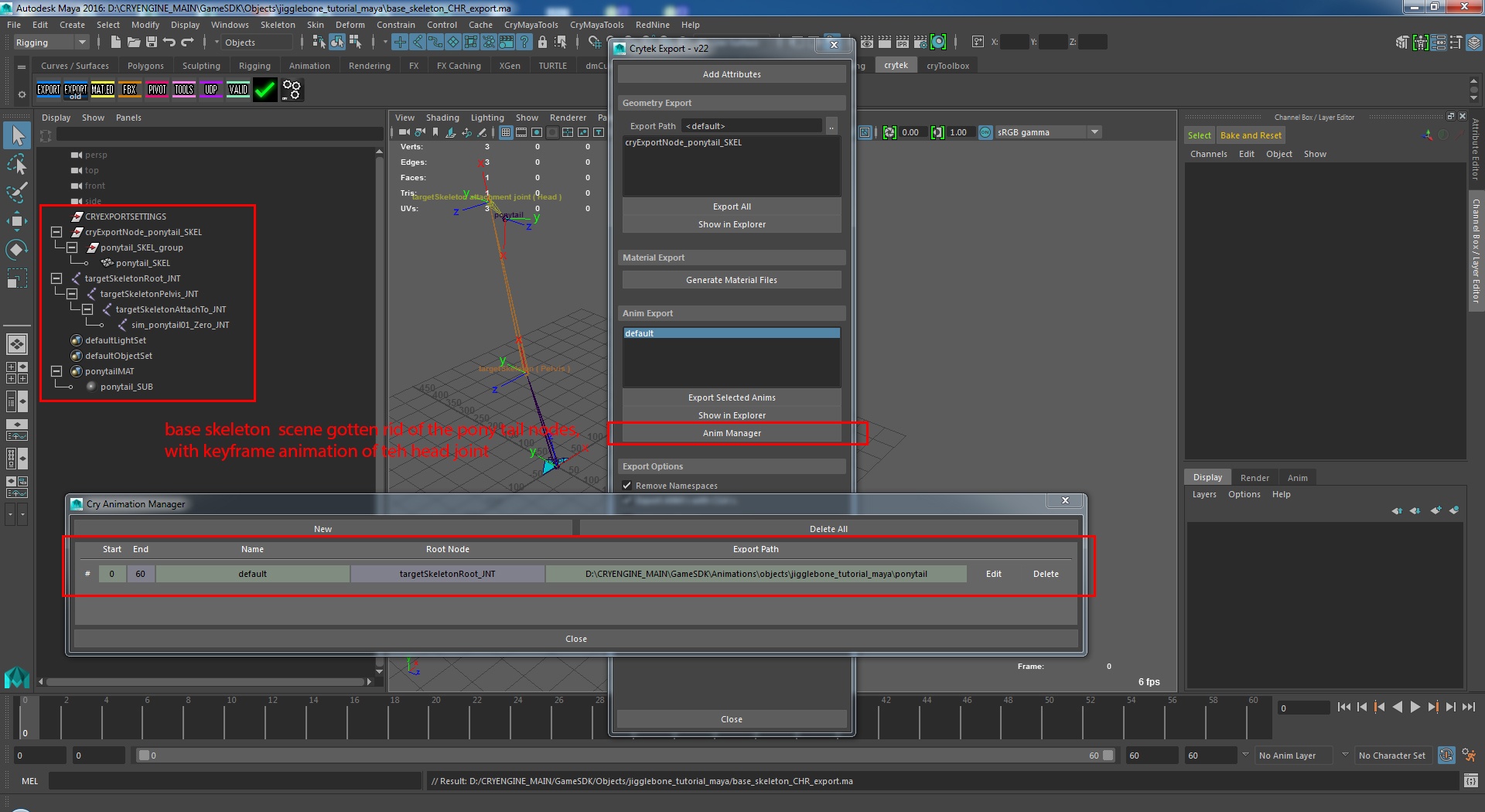 We load up the "ponytail_skeleton_final.ma" file again. Then we remove all the base skeleton related nodes and save the scene to a new file. From here we export the *.SKIN file. Use Crytek shelf -> Export to export your *.SKIN file. 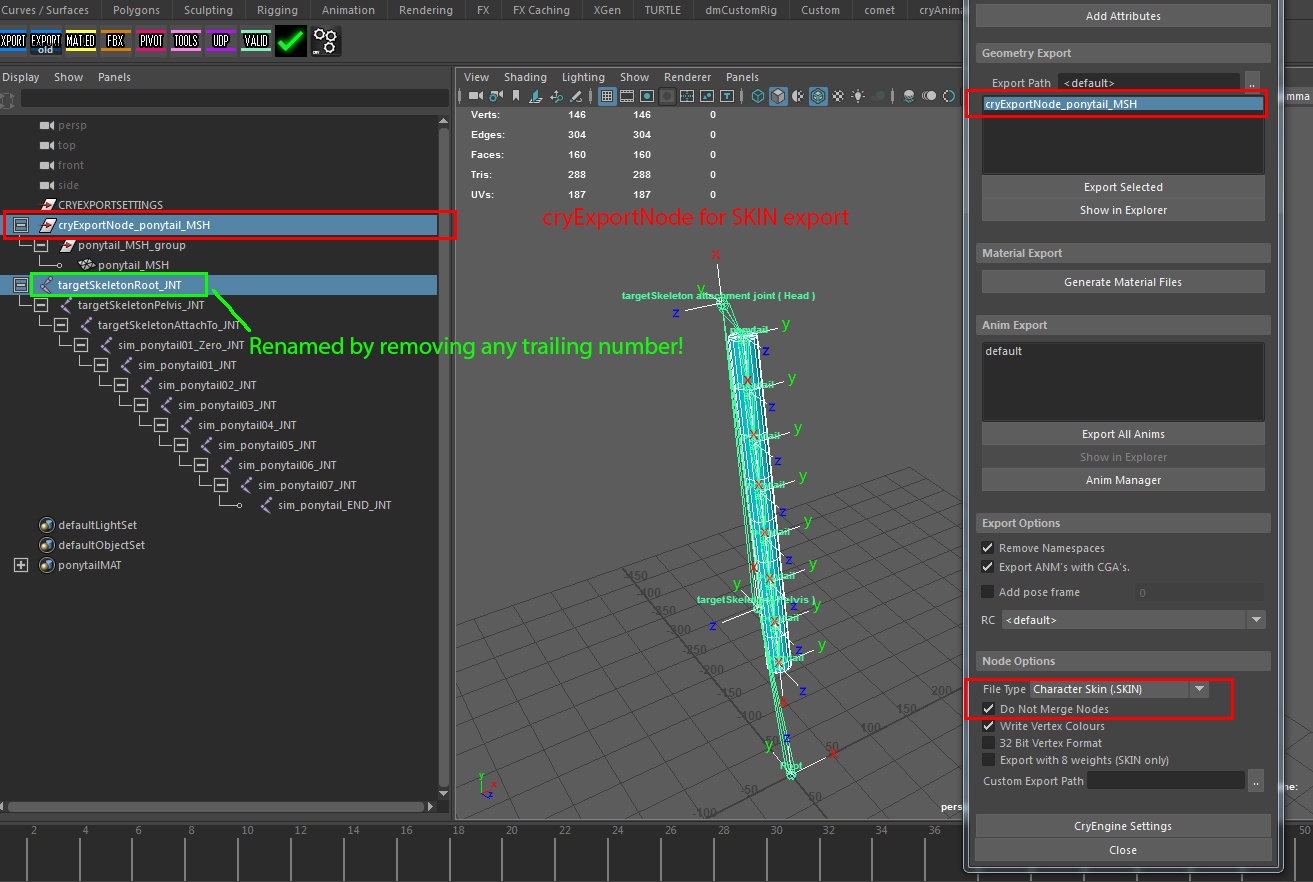 This concludes the Maya section. In the next section we will start CRYENGINE's Character Tool to set up the pony tail.