The Track View is the embedded Sandbox cut scene editing tool for making interactive movie sequences with time-dependent control over objects and events in the CryENGINE. 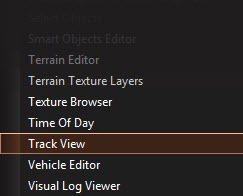 Creating cinematic cut scenes and scripted events are both possible, allowing you to sequence objects, animations, and sounds in a scene that can be triggered in the game, and played either as a detached cut scene from the third person perspective, or from the first person perspective of the player as he plays the game. Sequences created with Track View can be triggered in game with a specific Flow Graph node. Different properties enable sequences to range from passive in game scenarios up to fully uncoupled cut scenes.

This system will be familiar to anyone who has used animation software like 3ds Max, but this guide will also help those unfamiliar with cut scene editors to start creating simple scenes for your levels.

The cut scene editor is a little different to what you will have become accustomed to while learning to use the Sandbox Editor, and there are a few key concepts that you need to understand, especially if you have never used a sequence editor before.

These key concepts are:

Any key that falls under the Timer Indicator Bar as it moves across the track, becomes active. 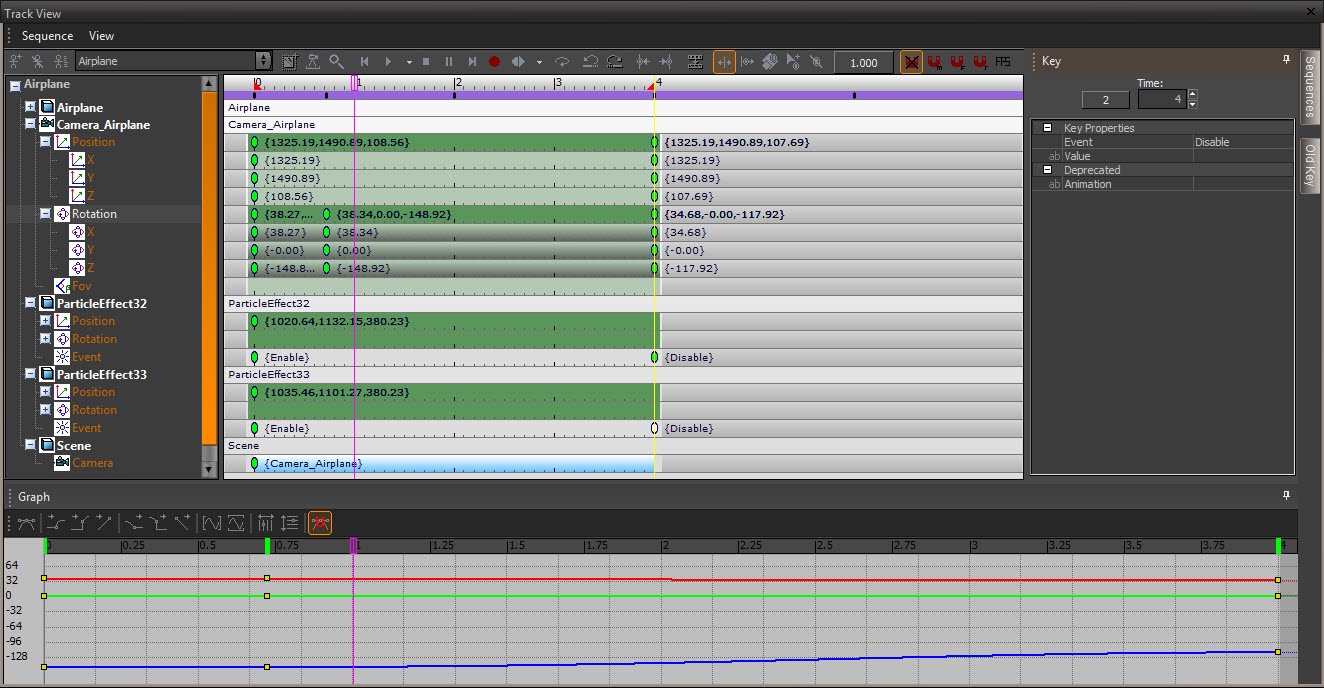 Creation of a sequence

To create a movie sequence open a level you designed in the editor and make the Track View panel show up by selecting menu option "View / -> Open View Pane / -> Track View".

Or click on the Add Sequence icon to create a new sequence:

You will get an empty sequence to which you can add your Camera nodes, entities, etc.

Before creating your Track View sequence, make sure you have added a new layer. This allows you to export your layer and re-import only your Track View Sequence without modifying any other objects in your level.

The Track View is stored in a container object of same name (which is always created at 0,0,0). You can move this Sequence Object as it's transformation does not affect the sequence. 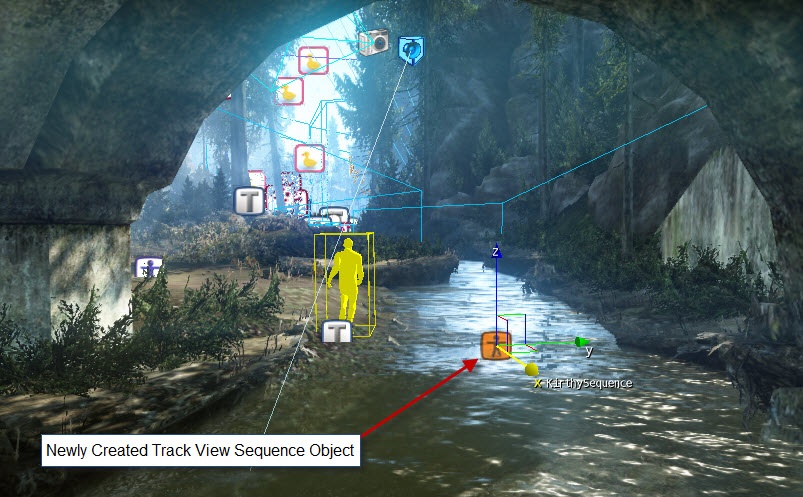 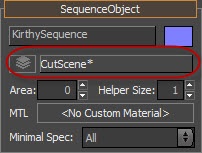 In the example pictures above, the Track View Sequence Object is created on the CutScene layer

Any object in a level may be modified in a sequence in terms of position, rotation, event handling and special properties. For example if an animated character is added to the sequence, one is able to set markers to play facial animations or play sounds at a given time.

That way, the system allows a designer to have full control over the world he places a movie in. As an example of how to attach and modify objects, a camera is being added to and moved through the terrain in a sequence: 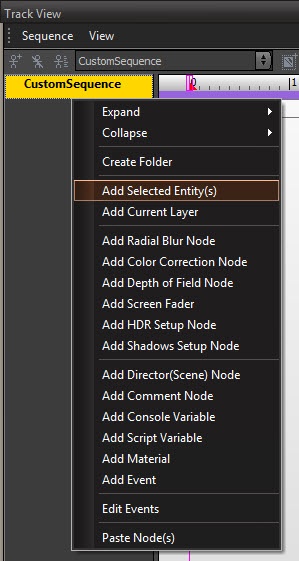 To construct a movement of the camera: 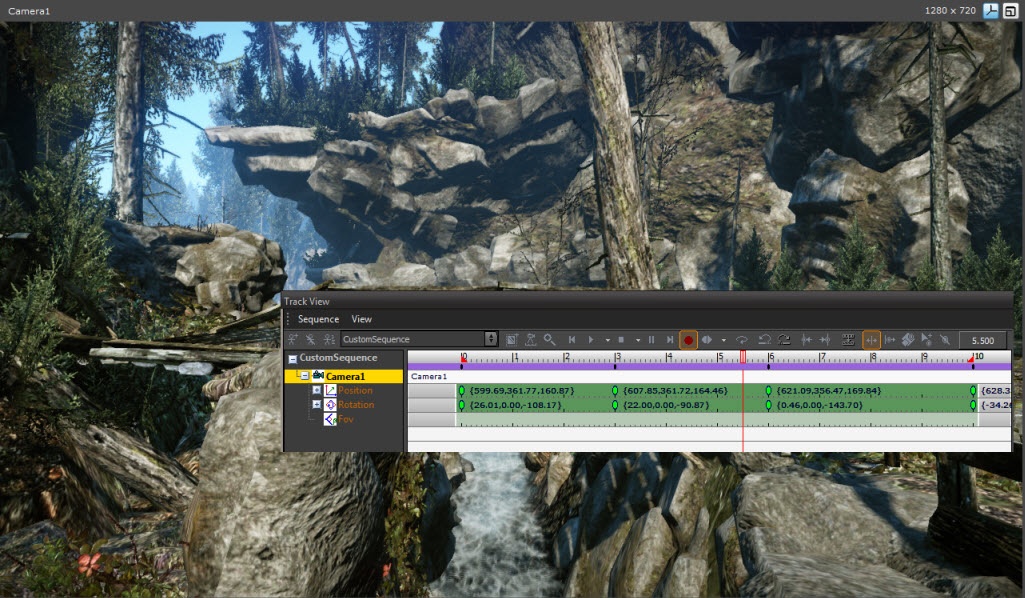 All cameras added to a track can be set to be used as viewpoint in order to show a sequence from different perspectives.

To set the viewpoint to a camera at a specific time, a Director(scene) node has to be added from the context menu of the sequence.

The new Director node will already have a camera track, which is meant to contain viewpoint settings. Double clicking on the camera track at a specific time will add a new key frame.

Image Modified
Setting up a camera to be use as viewpoint in a sequence.

The easiest way to trigger a sequence is to attach it to a trigger object such as a ProximityTrigger which can be positioned in the level.

Image Modified
FlowGraph starting a sequence after a ProximityTrigger has been activated.

Each entity supports multiple tracks. A track is where keys are edited to create the animated sequence. By adding multiple entities with the desired tracks, complex scenes can be constructed.

The first node that is generally always required is the Scene Node. It contains the tracks for the high-level components of the scene.

Animation curves are standard in professional animation packages and are great visual representations of animation data. 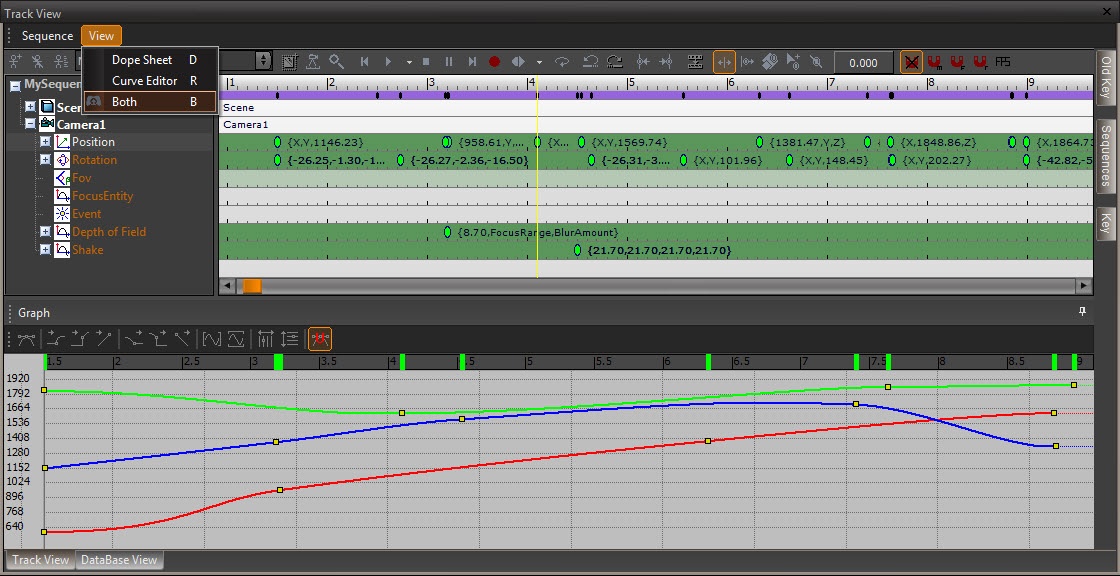 The postion, rotation, and scale values can now be manipulated by using a powerful curve editor, similar to 3ds Max or Maya. 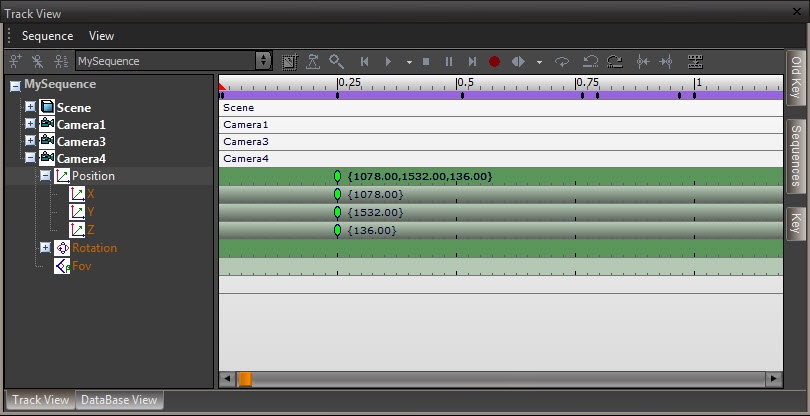 The position, rotation, and scale are now broken down into there three axes, x, y, and z. This enables direct control over each axis and ensures that the changes made to one axis don't affect another axis.

With the old system, a position key would have been placed for each rise and drop in the movement. If you needed to increase or decrease the amplitude of the head bob, it would have required the re-adjustment of each individual key, which is tedious and time consuming. 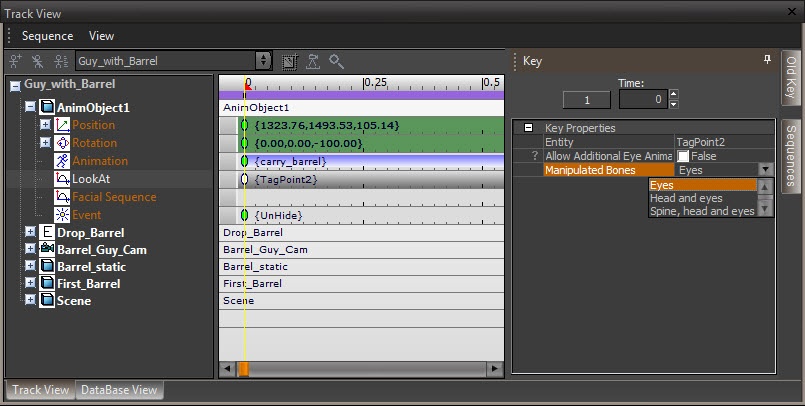 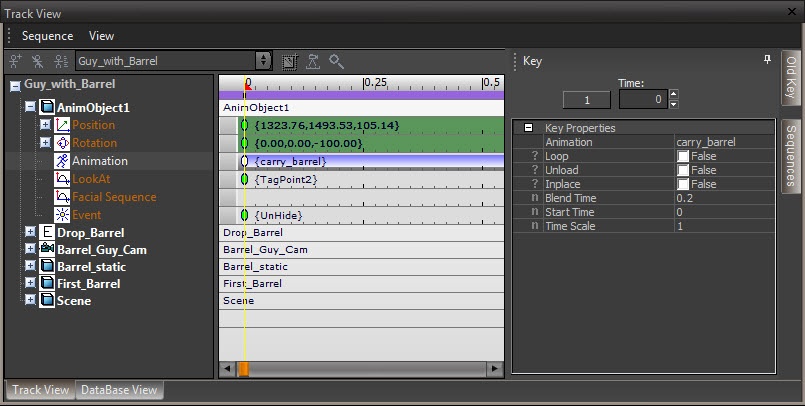 To start animating, the entity keys can be manually added in the Track View. Their values can be adjusted in the Key Properties section by adjusting the positional, rotational, and scale values over time. 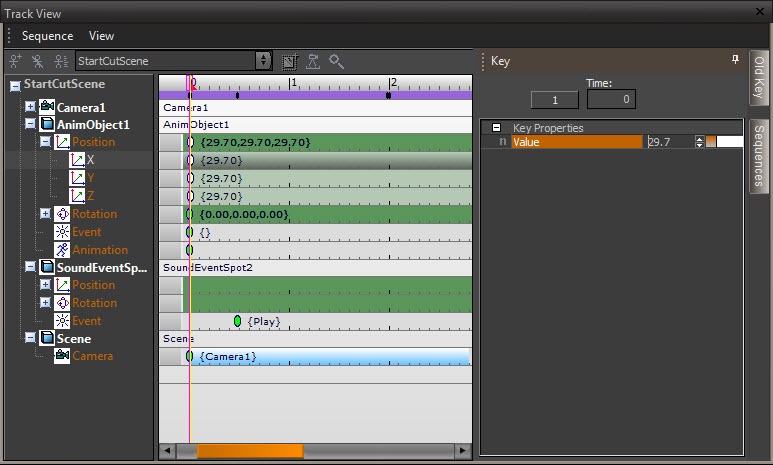 A useful technique for using the Track View and flow graph together is to send events by using trigger entities. Trigger entities send events to the flow graph to trigger flow graph nodes. Time delay nodes can be used, but are more difficult when adjusting the timing. They also pose issues when a scene is skippable because the logic will continue. 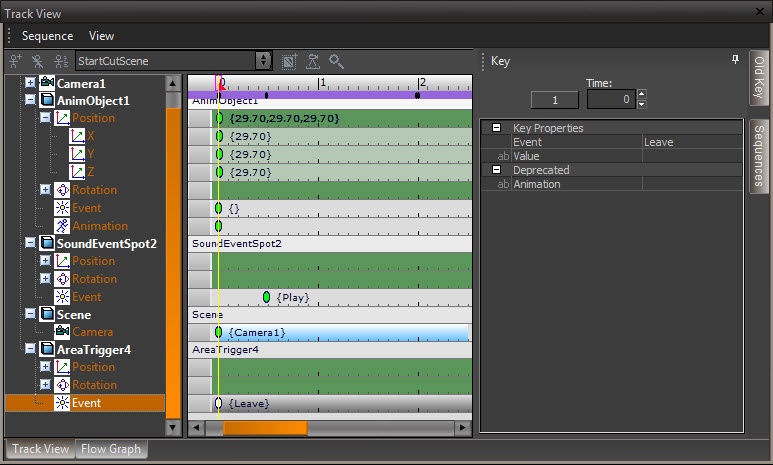 Image Modified
The Track View above has the AreaTrigger4, which triggers a Leave event at 11 seconds; when this is triggered, it will fire a port in the Flow Graph.

The properties of a sequence may be modified by clicking on the Edit Sequence icon, as shown below. There one can define whether the player will keep control over the scene as well as the appearance, such as screen format and HUD visibility. 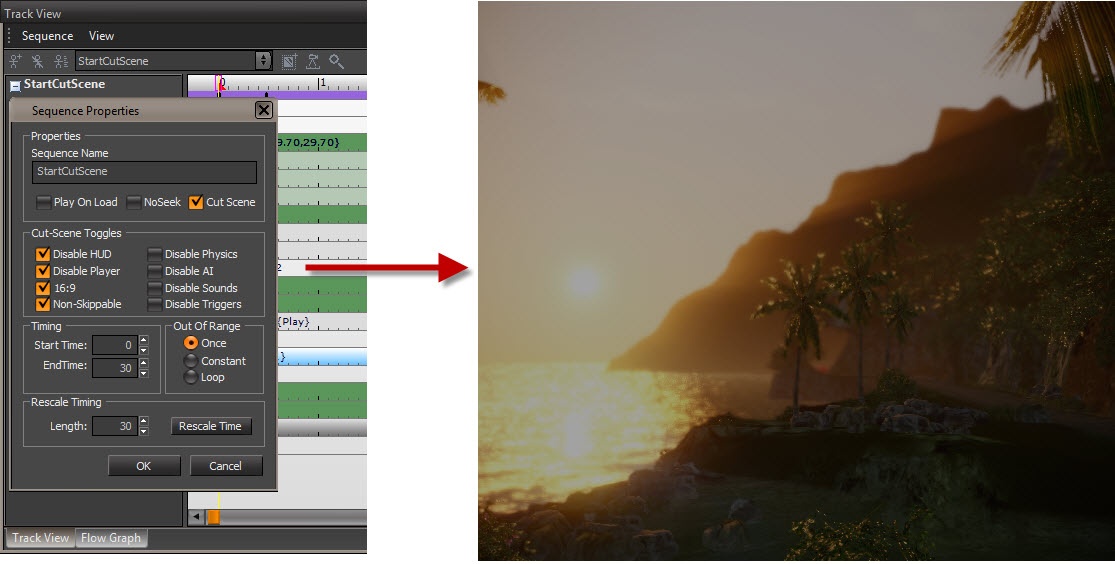 Image Modified
A cut scene example from the PacificIsland level defined by editing the properties.