When the game is shipped, players will use the Launcher and hence, the pure game mode to play. The Launcher will provide a real game environment for testing.

This "Launcher" file can be found in both Bin32 and Bin64 directories, inside the main SDK folder.

By default, the file is called "Launcher" but you're able to rename this to whatever you like. You can also set the title of the Launcher window by using the following variable in the system.cfg file: cvGameName=YOURTITLEHERE

When you run the Launcher.exe, you'll be asked to login with your CryDev credentials. After doing this you will be greeted with a screen that looks like the following: 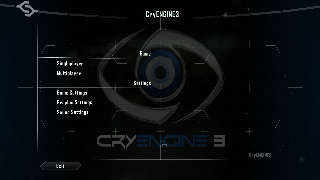 This is the sample main menu shipped with the SDK which gives you a number of options to adjust. If you'd like to create your own custom menu, we leave it up to you, the developer, to create a menu for your game.

To load a level click on either Singleplayer or Multiplayer, depending on which game mode you wish to play. 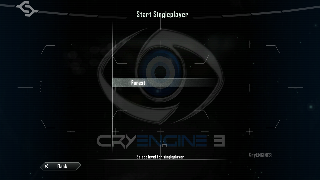 You can also Host or Join a multiplayer game via the Multiplayer menu. When joining a game, choose your name and the server you wish to join, which is the IP address of the Host. 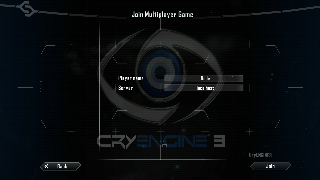