You can control the camera movement with the standard WASD keys, commonly used in First-Person Shooters and the Mouse.

Press W or S keys to go forwards and backwards and A or D to strafe left or right with the camera.

Press SHIFT together with any WASD key to zoom/strafe with increased speed.


Roll the mouse wheel to move forward or backward.

Hold down the middle mouse button and move the mouse pointer to pan the view.

While moving around the Viewport with the WASD keys, the speed of movement can be increased or decreased in real-time by scrolling the mousewheel upwards or downwards respectively.

You can also change the movement speed by clicking Camera in the top-left corner of the Viewport and move the Speed slider: 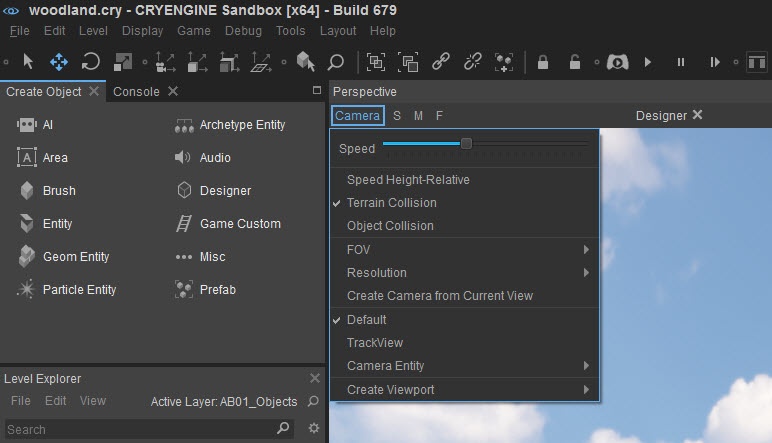 In the top-left corner of the Perspective viewport, next to the button for the Camera Settings, you'll find three buttons to set the camera movement speed to a preset value:

S stands for Slow, M for Medium and F for Fast.

By pressing Q, you can turn on Terrain Collision. When turned on, the camera will not move below the terrain, but slide along it.

If you have selected an object, Go to Selection button frames the selected object in your current Viewport (works both in perspective and orthographic views). An averaged center is calculated if more than one object is selected.