This tutorial will show how to create a popup system that can be used to show messages and notifications for the user. 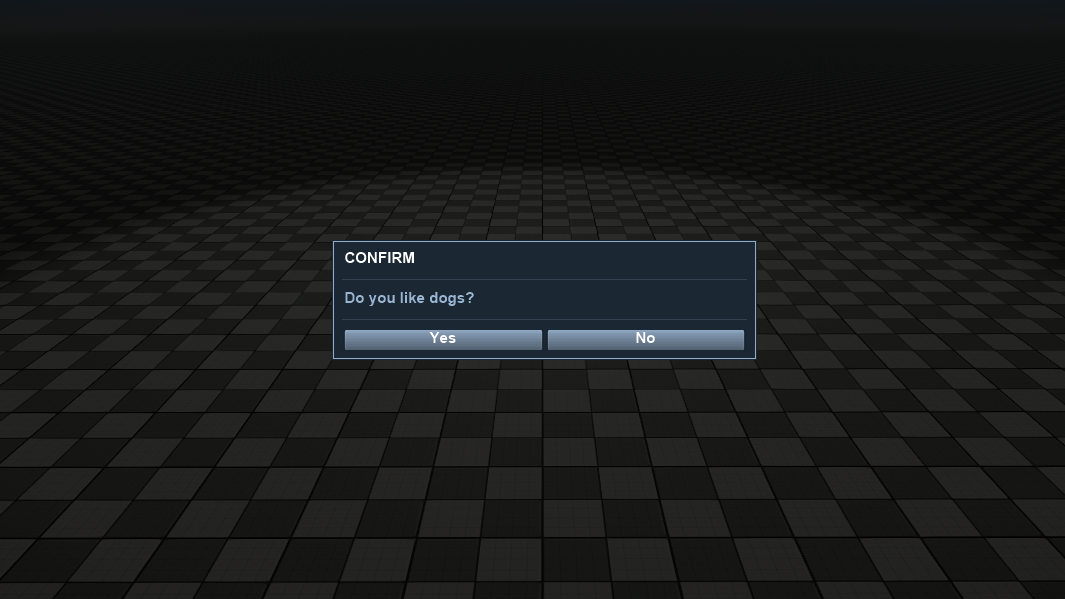 This tutorial requires a level that will make the popups stand out against the background. The assets can be downloaded here, and need to be extracted in the root folder of the project. These assets contain an example level which is called Example which has everything that's required for the tutorial. Alternatively, a new blank level can be created in the Sandbox.

To begin, a new PopupFactory class needs to be created. The PopupFactory will allow popups to be easily created by calling one of its methods.

Then inside the Game class a Canvas and a PopupFactory will be created.

Finally in Program.cs override the OnLevelLoaded function to notify the Game class when the level has been loaded. The UI is created after the level is loaded to prevent conflicts between the UI creating new textures while the engine is deleting textures while loading the level.

Next, the UIPopup class will be created, which inherits from the Panel class. This will expose a Header and a Content property.

First a basic panel will be created where the contents of the popup will sit.

Back inside the PopupFactory, a method is added that will create an instance of a UIPopup.

The MakeTestPopup method is changed so it creates a new popup when it's called.

And inside the Game class the following line is added to the CreateUI method so MakeTestPopup is called.

After compiling and running the game the popup will appear in the screen. 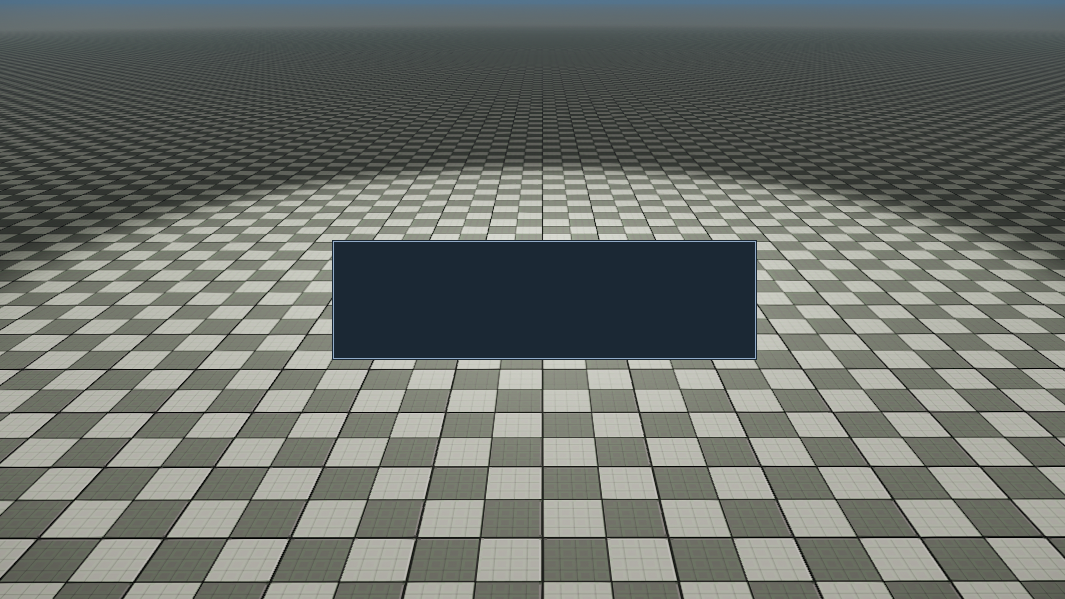 The next step is to add a header to the popup along with some dividers.

To begin, a container is added to the UIPopup where the content will sit. It will be 20px smaller than the popup itself to create 10px padding on each side.

At the top of the UIPopup class, a private UIElement field is added.

At the end of the OnAwake method the inner container is instantiated.

Next a header will be added to the popup. This is done by adding the following fields at the top of UIPopup first.

The Header property is used later on to set the value of the header when creating the popup.

Finally, the header text itself is created by adding the following to the OnAwake method.

Now that the UI is updated, the MakePopup method in the PopupFactory will be changed to also specify the header text.

After compiling and running the game a popup will now show up with text in the header. 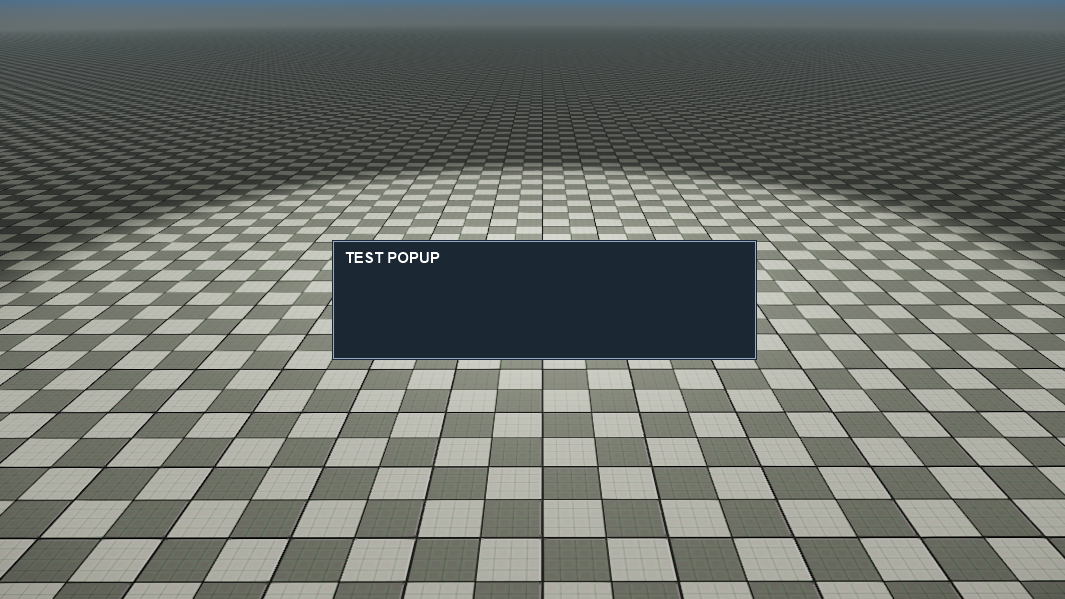 The popup still needs some content. Similar to the Header, for the content a private field and a public property are added to the top of the UIPopup class.

Inside the OnAwake method the Text will be created.

Back inside PopupFactory, the MakePopup method is adjusted to also set the Content property.

After compiling and running the game the popup will now show in the game with a text in the header and the content-area. 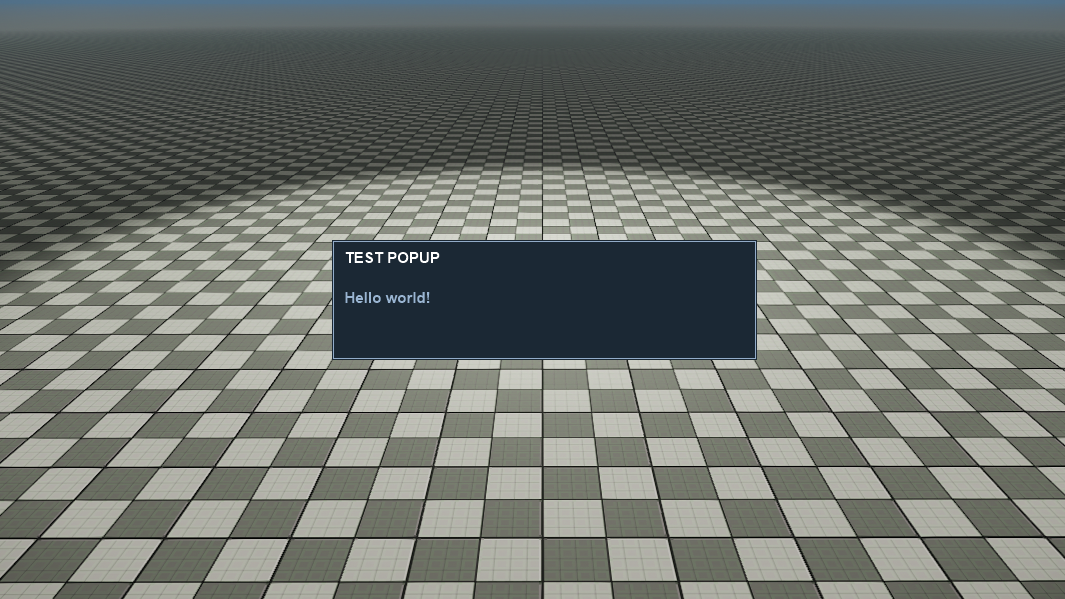 Inside UIPopup the following will be added to the top of the class.

At the end of the OnAwake method, the following is added to create a HorizontalLayoutGroup for the buttons and to initialize the List<Button>.

The following method is added which will handle instantiating buttons. The buttons on the popup are automatically resized to fit all the added buttons. The width of each button is set to be equal to the width of the popup's inner container divided by the number of buttons added to the popup.

The last thing that needs to be assigned is the onPress callback which is added to the button's OnPressed event. This is achieved by adding the following to the end of the AddButton method.

Back inside the PopupFactory, the MakeTestPopup method is modified to add the extra buttons.

After the game is compiled and running the two newly added buttons will show up at the bottom of the popup. 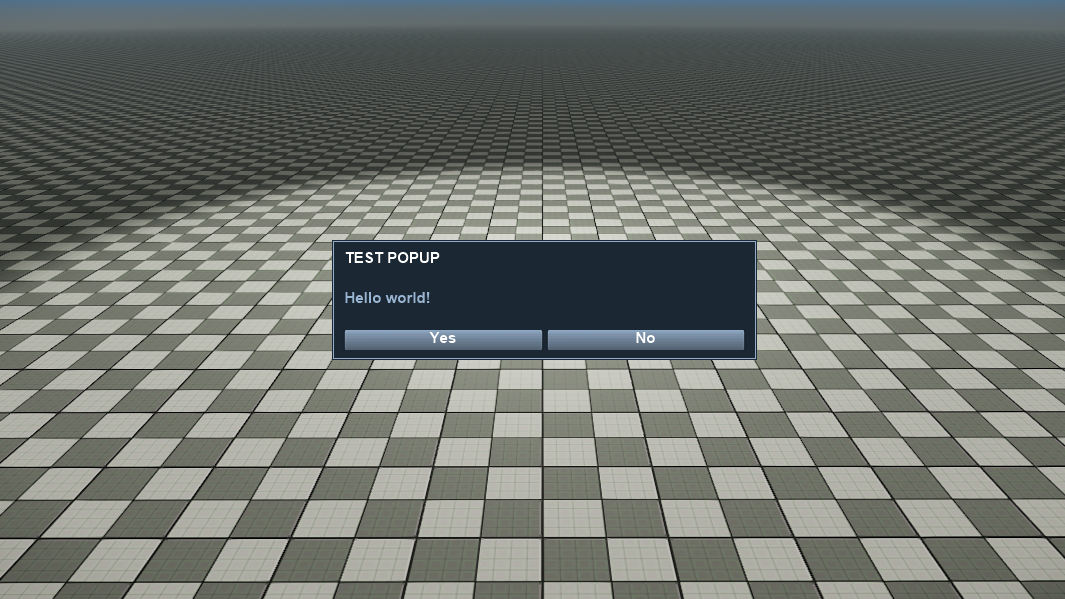 For the final bit of UI, a divider will be added below the header and above the buttons.

The following method is added to the UIPopup.

This will create a 1px high Panel that is the width of the popup's inner container.

Inside the OnAwake method two new lines are added which will create the dividers.

After compiling and running the game the popup will now have two dividers. 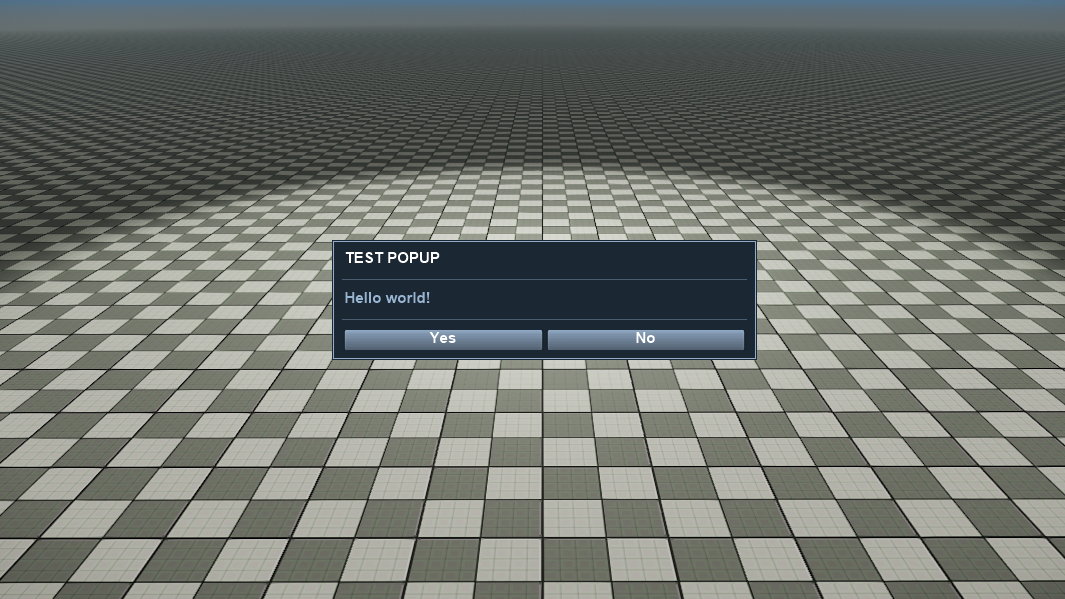 Now that the popup UI is in place, a functional Info popup can be created.

The popup system only allows one popup to be display at any one time. If other popups are shown at the same time, they need to be hidden but also flagged appropriately so that when the current popup is closed, the next popup waiting to be shown will be displayed.

To begin some modifications need to be made to the UIPopup.

At the top of the class the following property is added.

Next the following two methods which will trigger the Shown and Closed events are added.

Inside the PopupFactory, the Shown and Closed events are hooked in to display and destroy the popup.

First at the top of the class a List<UIPopup> is created.

The MakePopup method functionality is also extended to make it add callbacks to the Shown and Closed events.

And the associated handlers are added.

And a new method is added that will create the info popup.

Back in the Game class, the MakeTestPopup line needs to be replaced with the following.

After compiling and running the game the following popup will appear. Clicking the button will cause the popup to close. 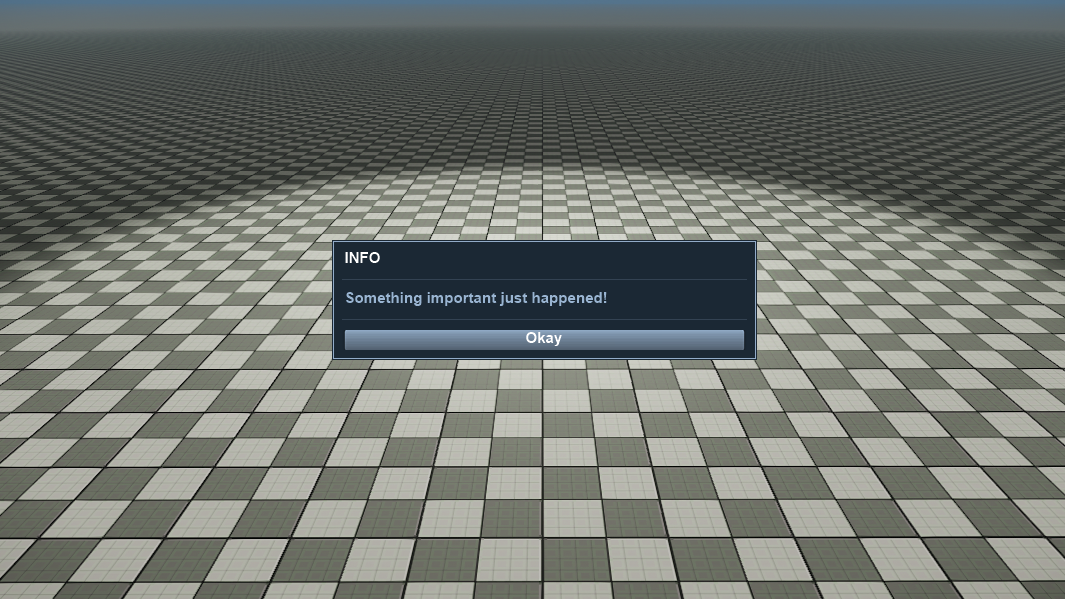 A message was also logged in the console when the button was pressed.

Now that a basic system is in place, the next step will be to show a transparent black panel behind the popup when it is shown to help distinguish the popup from the underlying UI.

The following field is added to the top of the PopupFactory class.

Then in the constructor of the PopupFactory a Panel is instantiated with a black background.

As the panel starts inactive, some logic is needed that will enable it. The Active state of the panel will be changed when a popup is shown and closed.

The OnShowPopup method is modified to achieve this.

And the OnClosePopup method is modified to deactivate the panel again. 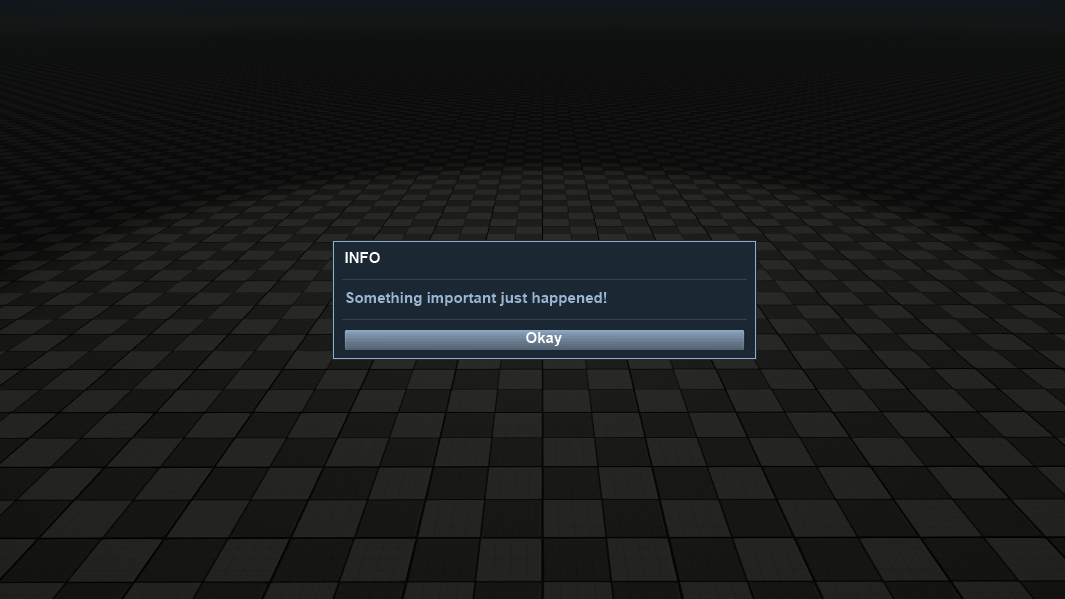 With the groundwork in place, additional popups can be easily implemented. In the PopupFactory a new method that will create a Yes/No style popup can be added.

Or a Yes/No/Cancel style popup can be added. 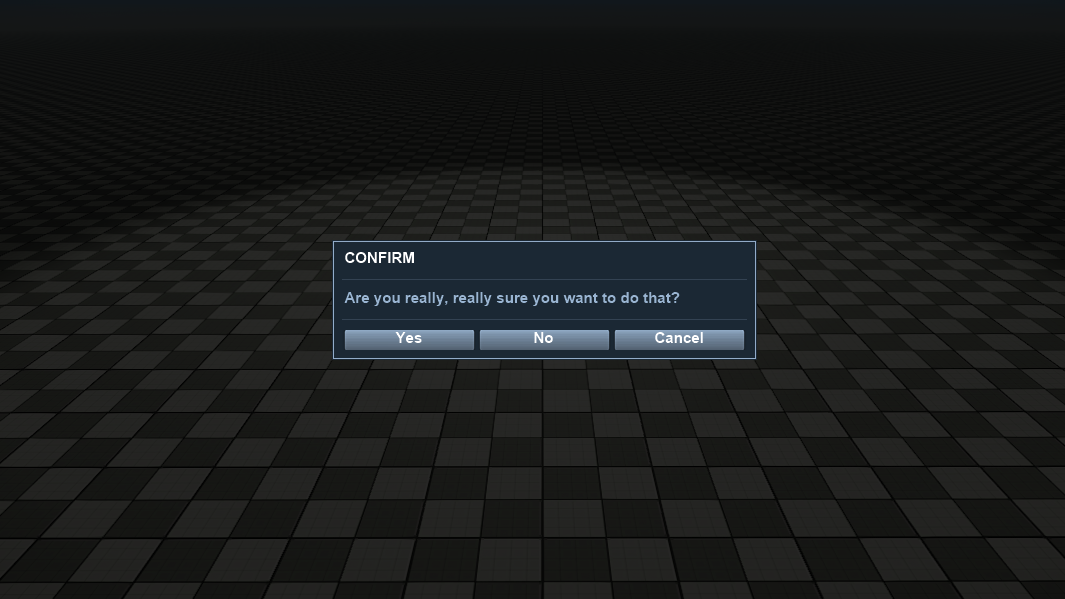