This tutorial introduces the use of the Projector Light component and its most often used settings. The Projector Light component emits light in a specific direction. The radius of its beam, brightness, color, the animation of its brightness and color, and projected textures are just some of the many properties that can be controlled. Common use cases include spotlights, flashlights, vehicle headlights, architectural light fixtures from desk lamps to ceiling lights, and much more. Whereas the Point Light component can be compared to a naked light bulb, Projector Lights are similar to real-world light fixtures - light bulbs mounted in some kind of fixture that provides full control over all of their visual characteristics.

Before attempting this tutorial we recommend that you read the documentation on the Entity Components (From Engine Version 5.6). Doing so will give you a much better understanding of the concepts behind CRYENGINE's Entity Components. You'll also find a reference guide here to all of the properties available to each component.

Before you begin creating a light, use the Environment Editor to change the time of day to night so the sun doesn't overpower your lights. In order to see these examples, we set the time of day to 00:15. The sun intensity is 8000 and its color is set to #5ed7fb, a more saturated green-blue than the default. We've positioned the moon to come from the top right in these screenshots. You'll also notice that the moonlight casts shadows that stretch to the left from the Designer objects we've placed in the scene.

While you can add a light component to an existing entity (such as a visible mesh representing a light bulb or fixture), they can also be added directly to a level as components independent of any entity. In this case, the light component itself is invisible to the player; only its effect is seen:

Note that when you click on a Projector Light component, a set of yellow lines show you an important property: the radius of the beam in degrees, which you'll find in the Properties panel under Transform -> Angle. The default is a 45° angle, but you can use any value between 0 (in which case no light will escape!) and 180°.

Once you've made your light bright enough that you can see its effect, try using the Move and Rotate gizmos to aim it more precisely.

You can control the brightness of specular highlights independently (Color -> Specular Multiplier). For example, project a light onto a sphere so you can see the specular reflection of the light source on the ball. Set Specular Multiplier to 0 and the highlight disappears completely. Increase it and the highlight brightens and enlarges. However, we recommend leaving this parameter at the default value of 1 to produce physically accurate specular reflections, and using Diffuse Multiplier to control brightness.

By default, light components do not cast shadows; you can enable them by setting the Shadows -> Minimum Shadow Graphics setting to something other than None. Remember that this it not a quality setting, but determines within which system shadow spec an occluding entity will cast a shadow.

Range is the maximum distance (in meters) that the light can reach. To mimic light in the real world, light diminishes in brightness exponentially with the distance from the light source (where Brightness = 1/Distance2). However, there are two other factors that will affect this:

The screenshots below indicate how falloff is calculated and affected by the Range and Attenuation Bulb Size settings in a variety of use cases. All instances are set up as follows:

In this first example, the Range of the Projector Light has been set to exactly 100m, and the Diffuse Multiplier is 3000. You can clearly see exponentially diminishing brightness up to 80m. At that point, the falloff switches from exponential to linear, which you can see by the sudden, drastic drop in brightness between 80m and 90m, and then again to 0% brightness at 100m. (We've used a little bit of blue-green moonlight from behind the numbers so you can still see them, and a red light to mark the 100m point.) 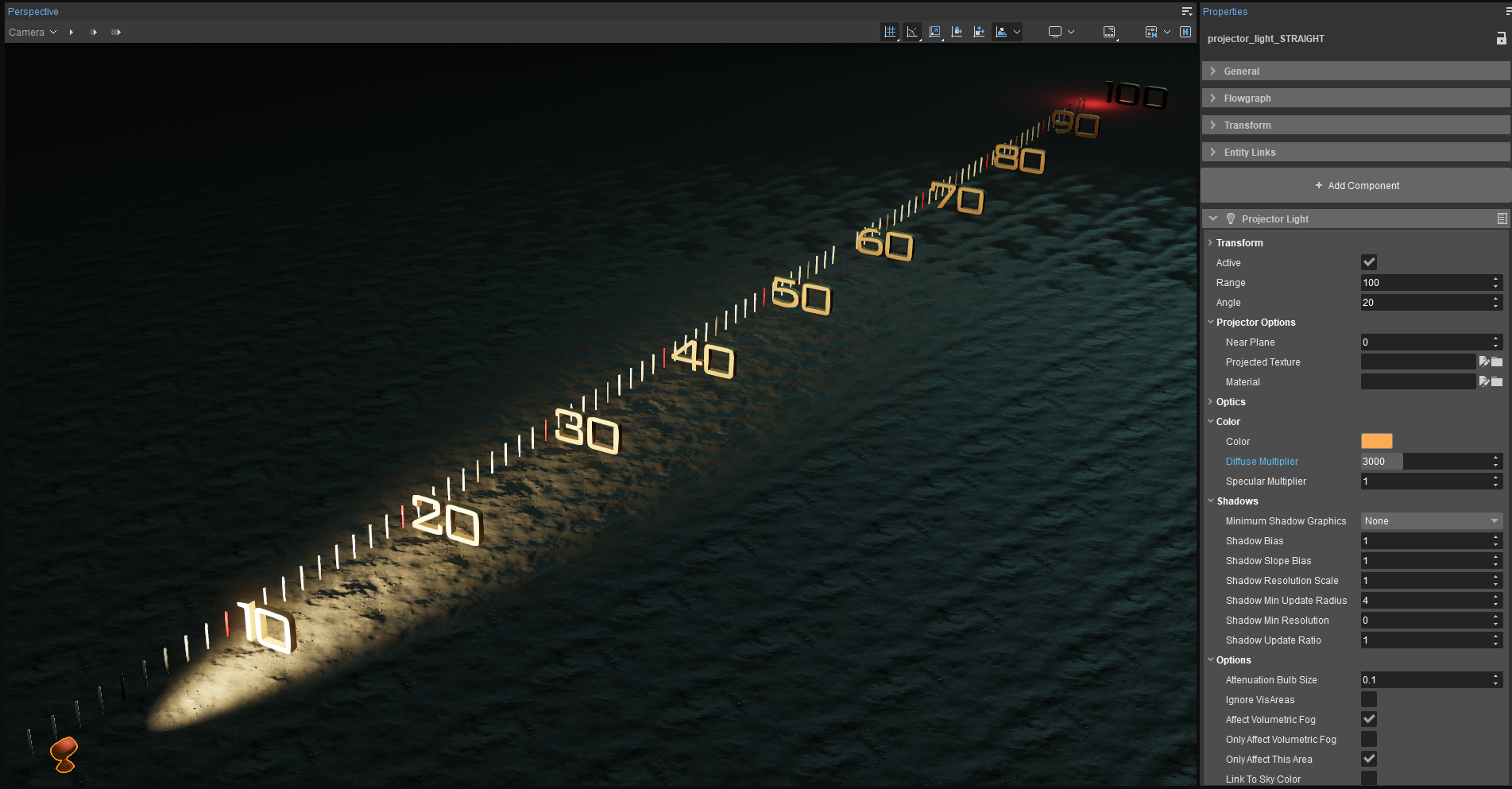 In this second example, the Attenuation Bulb Size has been changed to 100m, which means that the light is 100% of its brightness from 0 to 80% of the Range value. (Since the change in the Attenuation Bulb Size effectively extends the full brightness of the light over an 80m radius, we've also reduced the Diffuse Multiplier to just 5 to compensate for the added brightness.) Since the Range is still 100m, that means that the exponential part of the falloff has been completely eliminated. I.e., there is no change in brightness from 0 to 80m. Between 80 and 100m, the brightness diminishes linearly as it did in the previous example, which you can see again from the drastic change: 90m is half as bright at 0-80, and 100 is again completely dark (i.e., the orange light has fallen to 0% intensity). See Attentuation Attenuation and Falloff for more information. 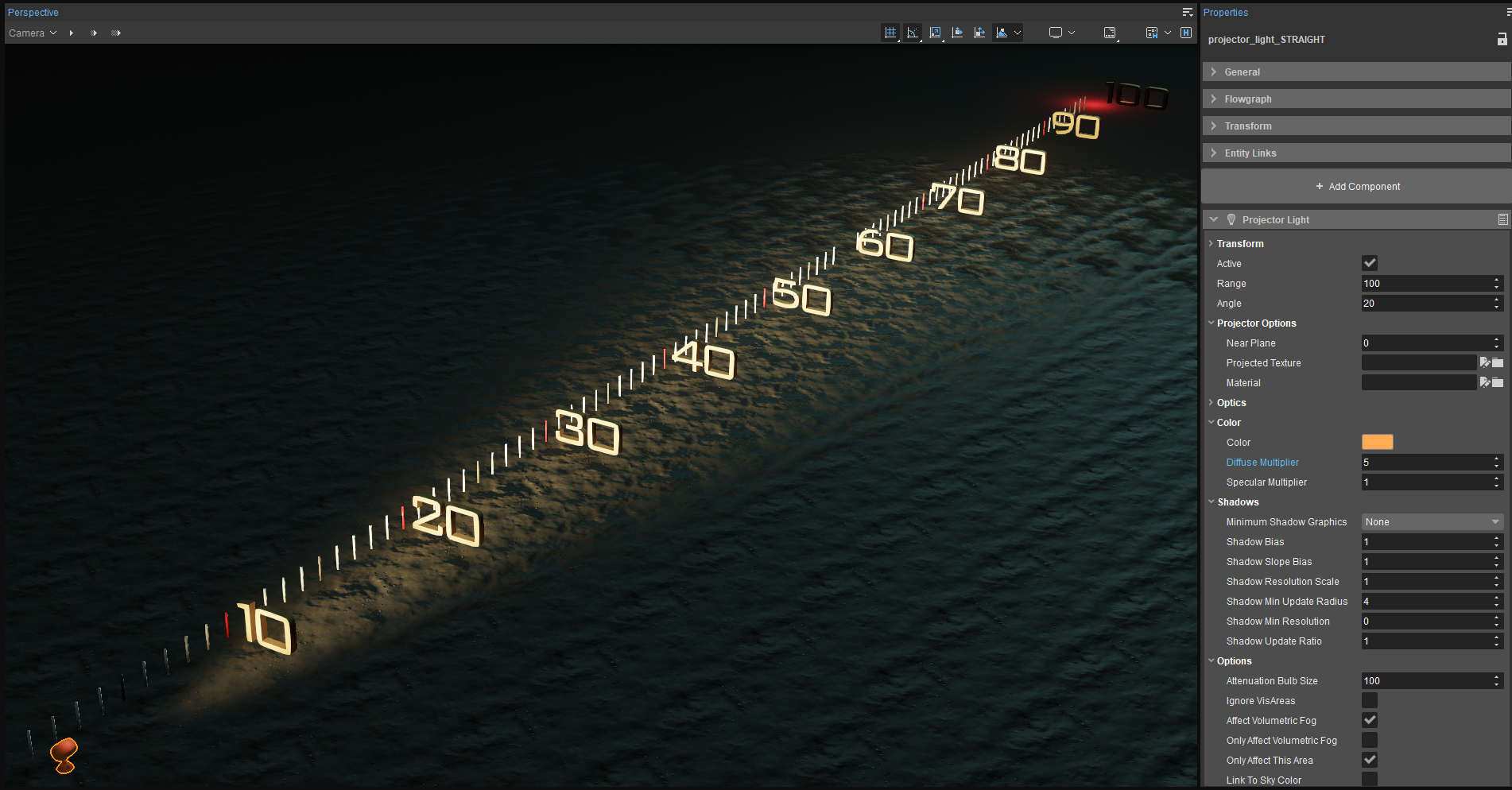 In this example, the light uses a 45° Angle to project onto several objects and the terrain. 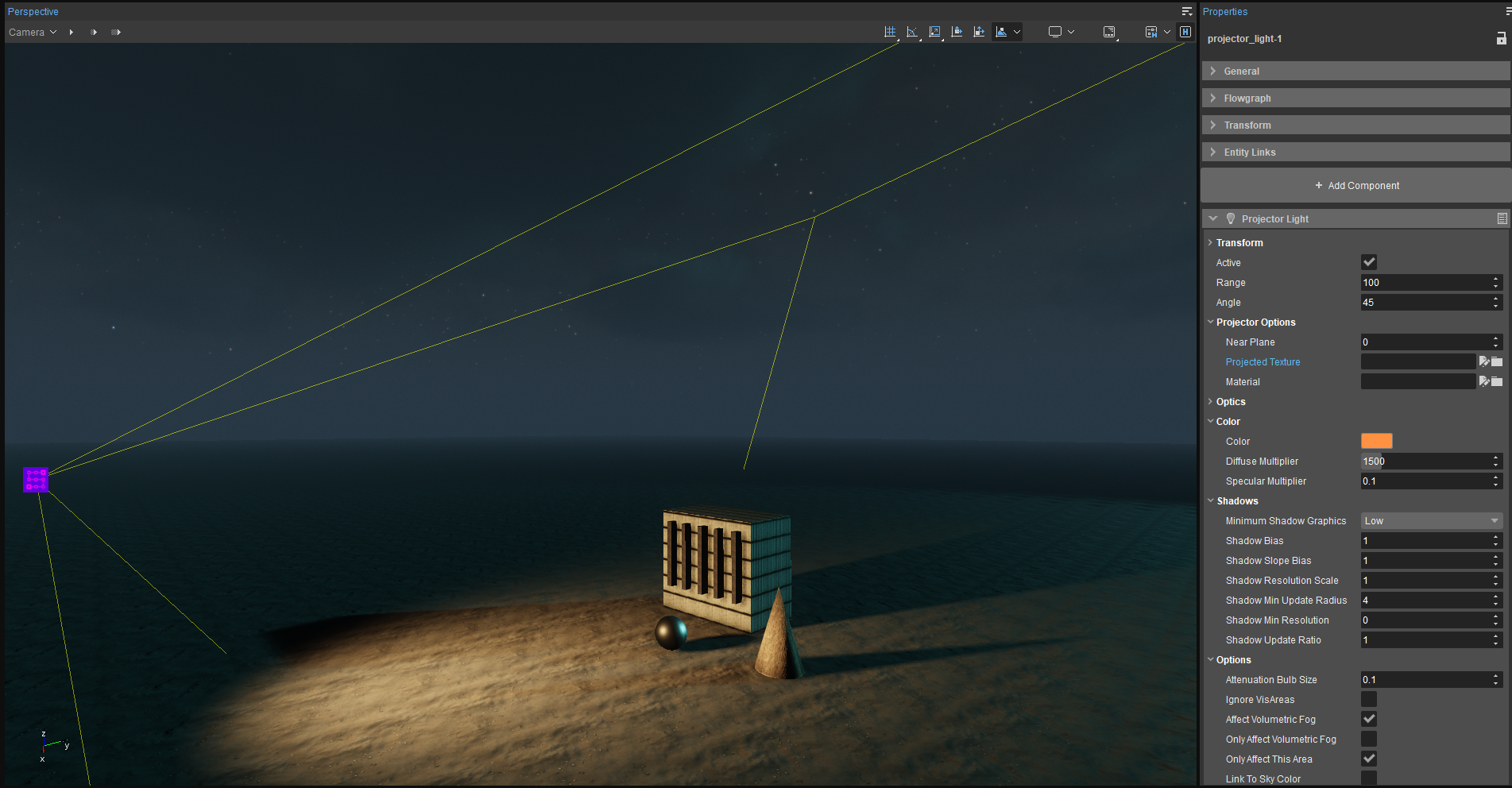 Compare this to the example below, where the Angle is still 45°, but a rectangular greyscale texture that's 25% as wide as it is long has been added to the Projector Options -> Projected Texture property to give the beam a rectangular shape. 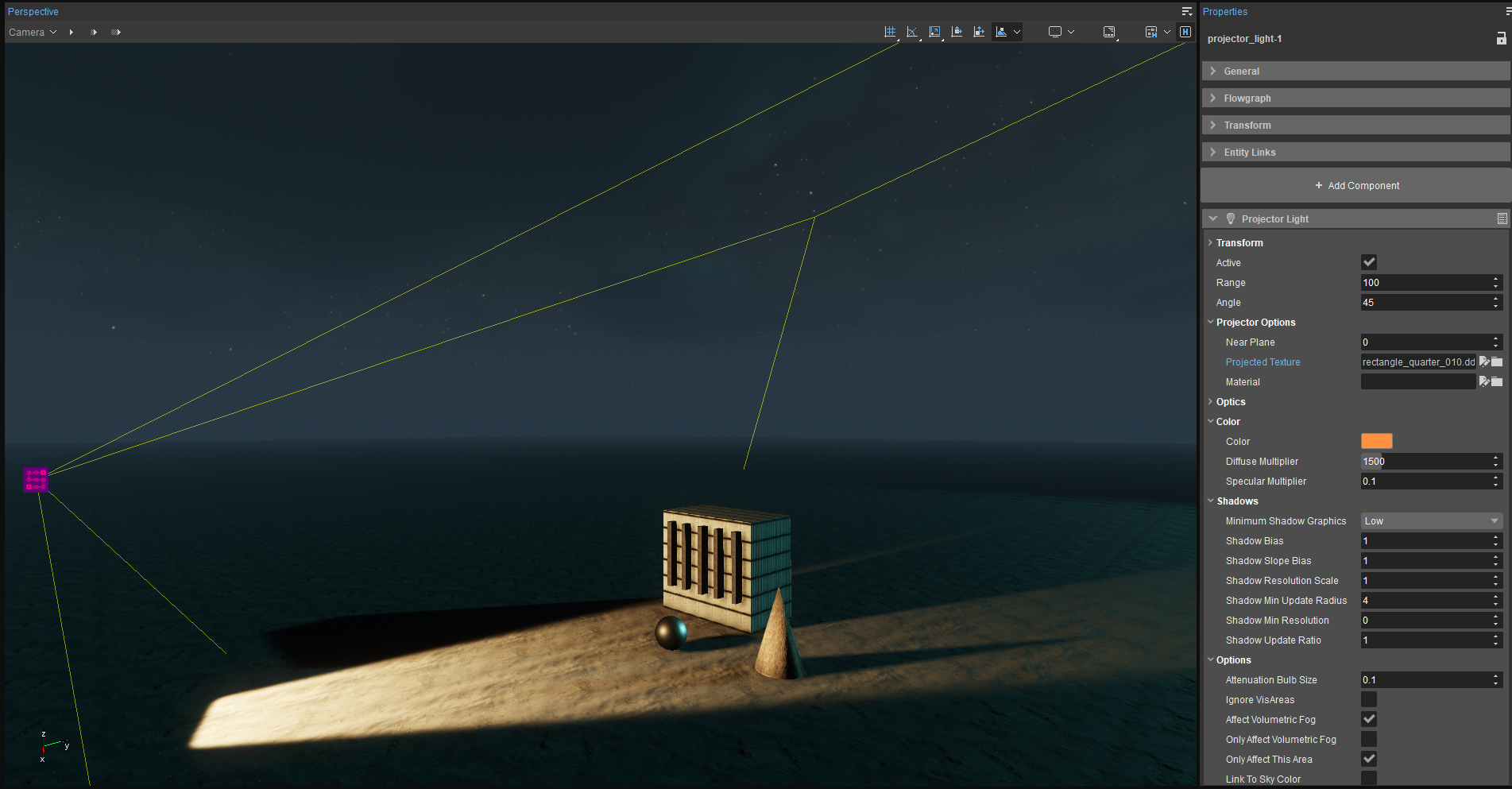 You can use greyscale textures in the Projector Options -> Projected Texture property to create patterns and shape the edges of a light component. Here the Angle has been set to 5° to spotlight only the ball. 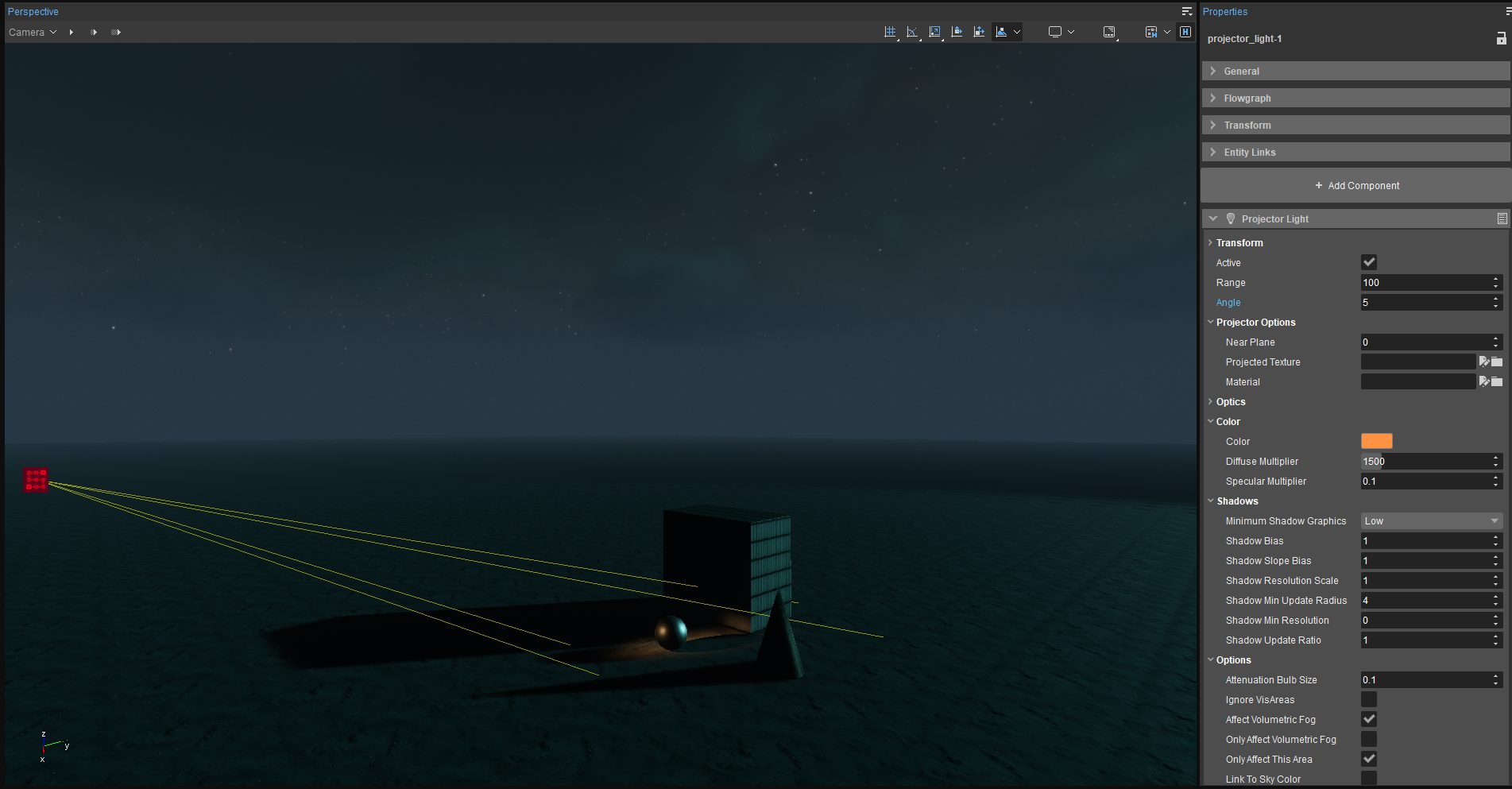 With a circular, hard-edge circular texture added to Projector Options -> Projected Texture (GameSdk\textures\lights\generic\spot_005.dds), this 5° Angle setting is much more effective as a spotlight, below. 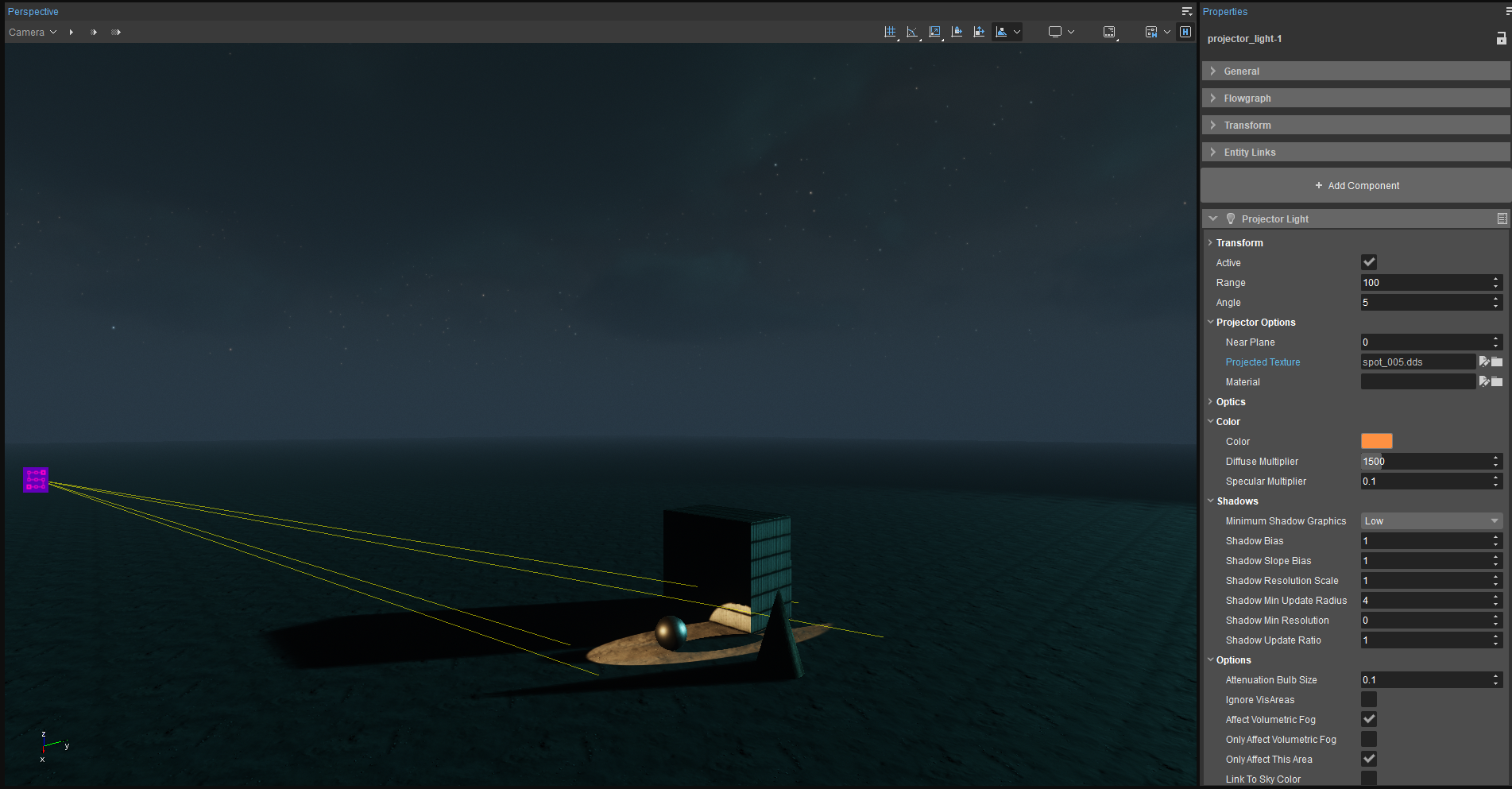 In this example, the Angle has been set to 24° and a texture added that imitates Venetian blinds. (You can find the Venetian blinds texture in the GameSDK textures folder, and the other textures used above in textures\lights\generic.) 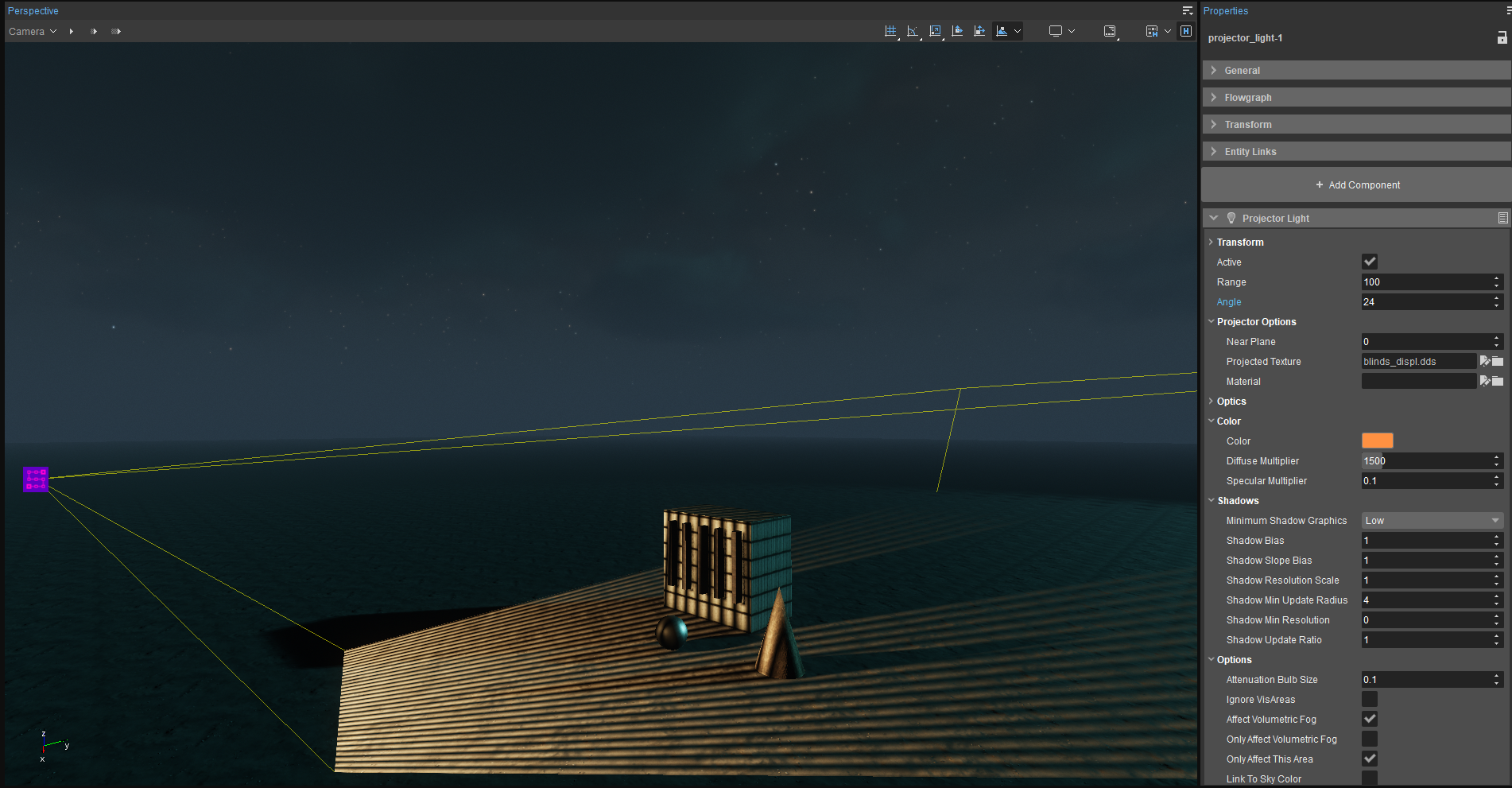 Creating Your Own Projection Textures

If you want to create your own projected textures, we recommend making them 512x512 pixels, 16 bit greyscale, and exporting them as CryTif files using the LightProjector preset. (Make sure you've installed the Photoshop CryTif plug-in by running Tools\CryToolsInstaller.exe.) While you can use higher resolution 1024x1024 pixel textures, you shouldn't need to in most cases; typically it will only increase memory usage without any visible benefit.

In Photoshop, create a 512x512 pixel 16-bit greyscale image. You could begin with a black background to block all light, a white background to show light everywhere, or exactly middle grey to reveal 50% of the light's intensity, then darken and lighten areas selectively. 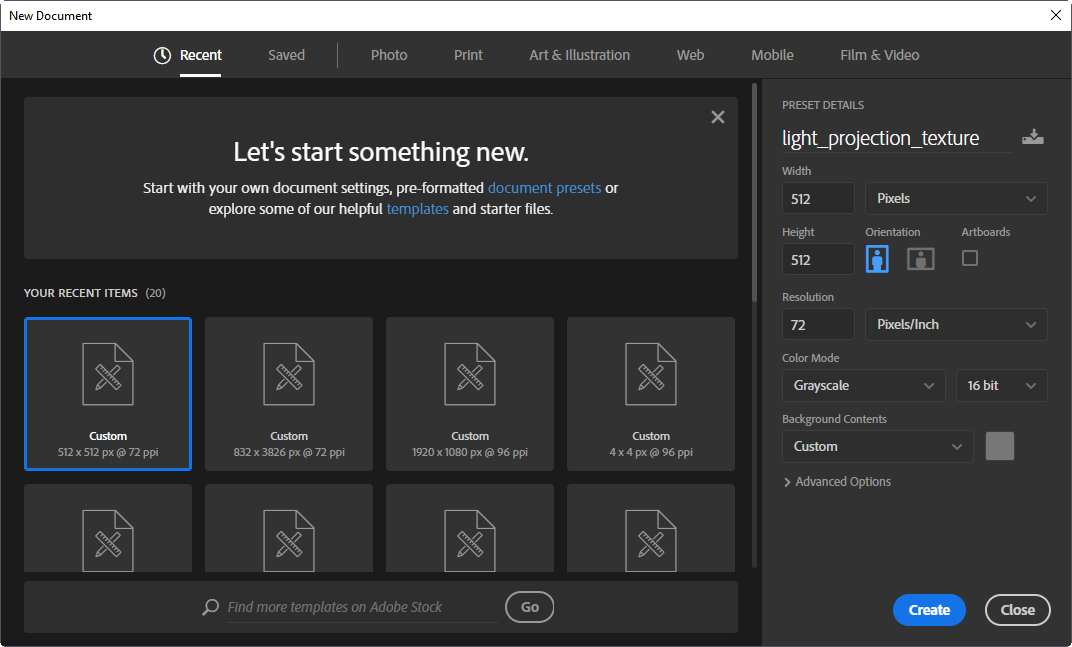 To add texture, paint with any black brush wherever you want to create shadows or white wherever you want to increase the intensity of the light. Black will completely block the light; white will reveal the light's full intensity. You can also try Photoshop filters to render textures. Here we've used the Filters > Render > Clouds filter, then an 8 pixel Gaussian Blur. 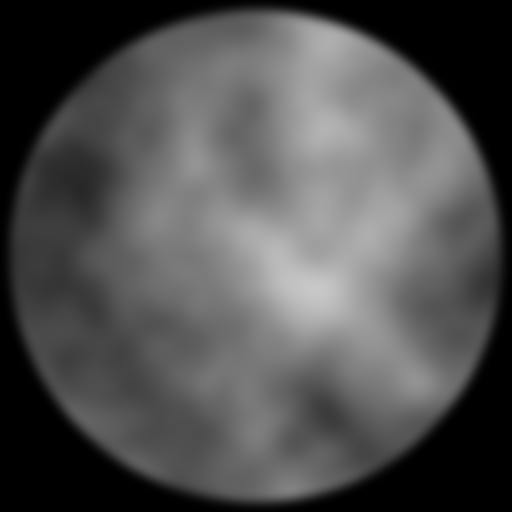 You can also use drag or copy and paste any image into your Photoshop document to create projected 2D images, textures, logos, etc. In this example, we've used the CRYENGINE logo as a white area within the texture, with all pixels around it black.

Make sure that you transition to black before you reach the edges of your texture, or else you'll see a pixelated edge when projecting it with a light component, as shown below. To do so, select your desired shape with any selection tool (marquee, lasso, pen, etc.), but stay well away from the edges of the canvas. 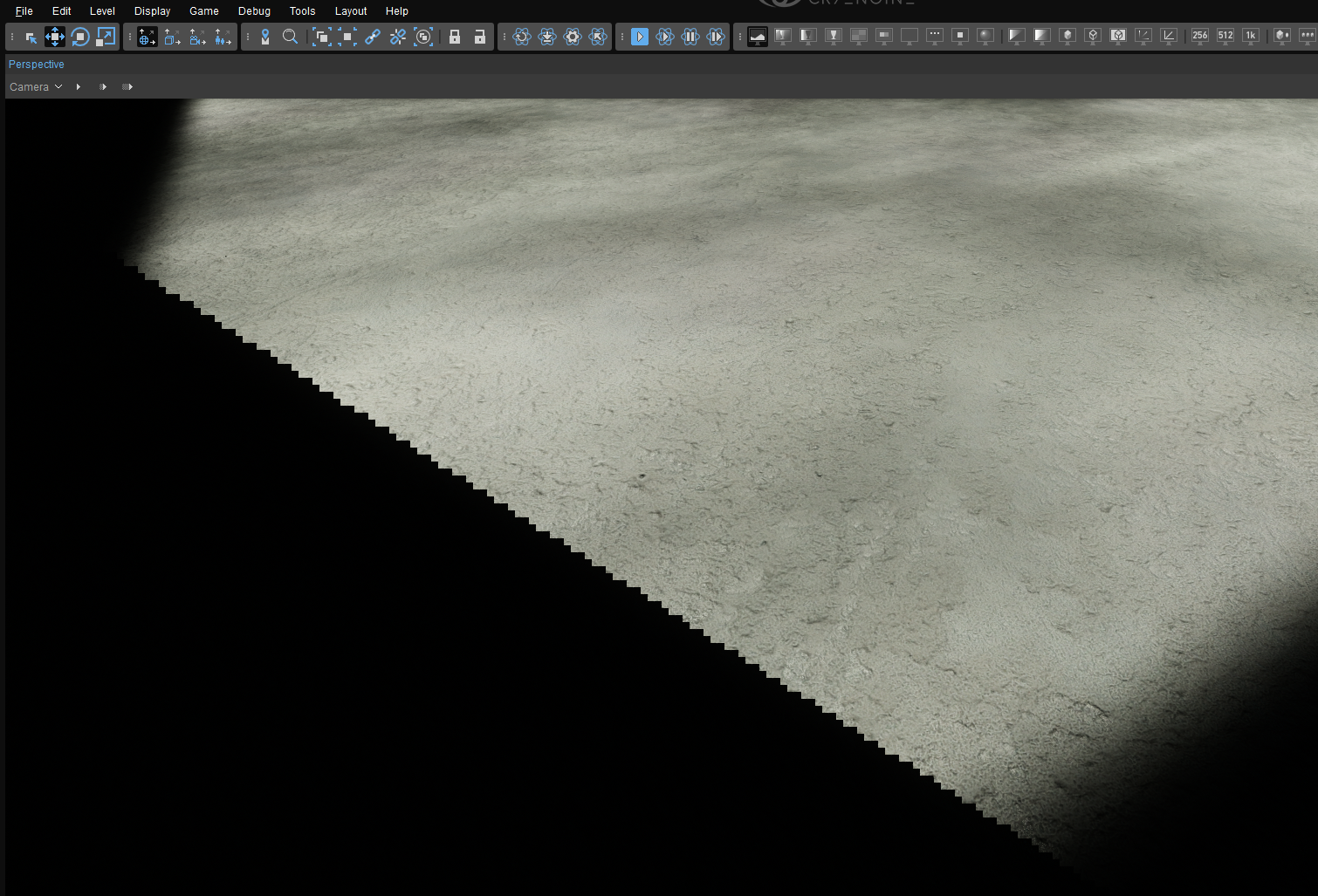 Choose Select → Modify → Feather... from the Photoshop menu. Enter the desire number of pixels over which you want the edge of the light to fade away.

Fill the selected area with black.

Be cautious about putting lights with projected textures too far away from surfaces, as the relatively low resolution of the textures will eventually become apparent. The example below uses a 1024 pixel circular texture placed unusually far from the terrain. 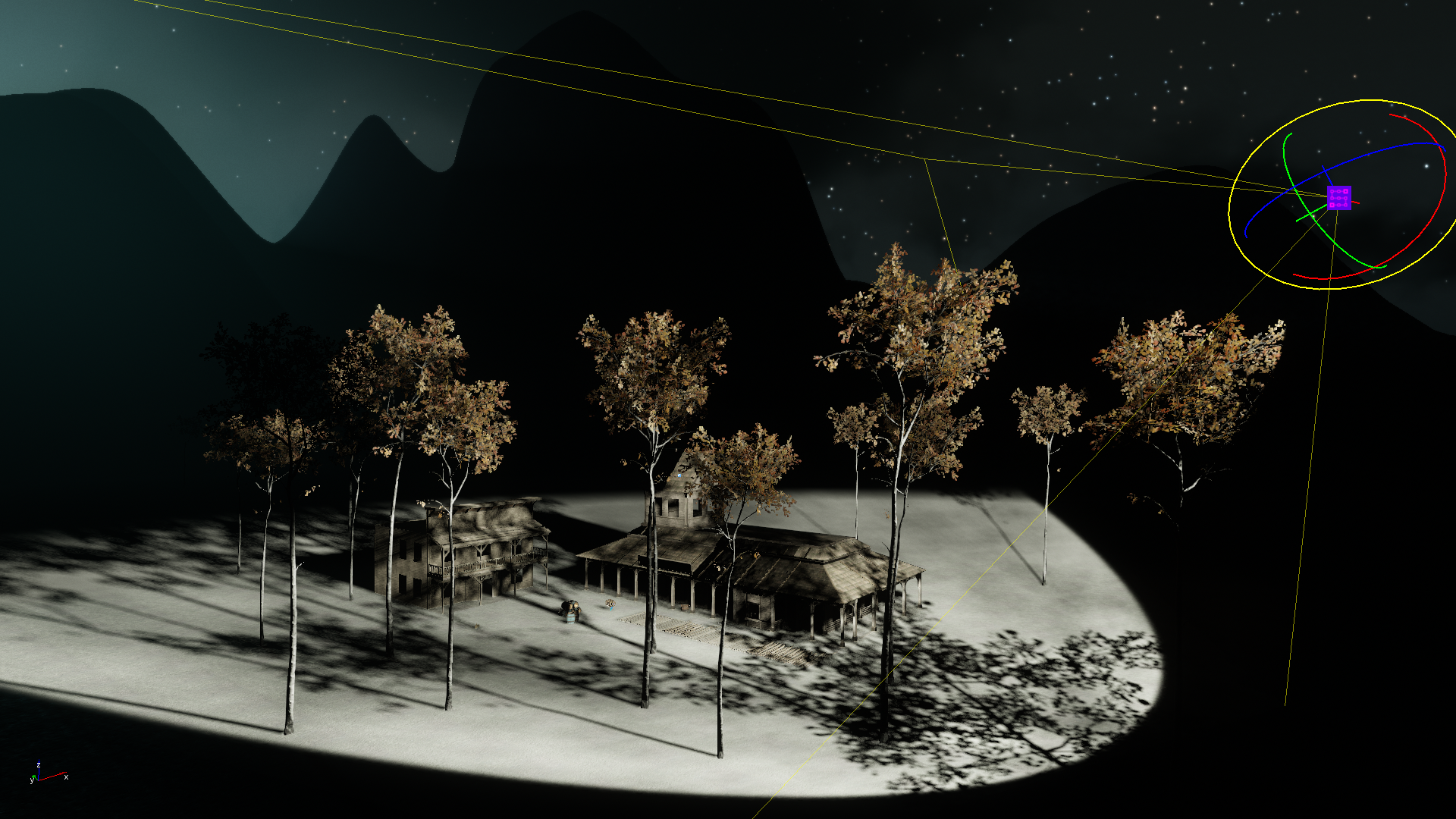 The property Options → Only Affect This Area can be checked if you add a Clip Volume (Create Object → Area → Clip Volume) to the level and use the light's Entity Links → Pick tool to select the Clip Volume. (Don't forget to close the Pick mode at the top of the Perspective Viewport after you've clicked on the Clip Volume.) This forces the light to only appear inside the Clip Volume - very useful in use cases like insuring that light does not spill outside of an interior space, etc., as shown below. You can even use complex shapes after you've drawn the simple Clip Volume box by clicking on the Edit button and using the Designer tool to modify the model. The Clip Volume model can be complex, but it must be watertight (i.e., not contain only holes). 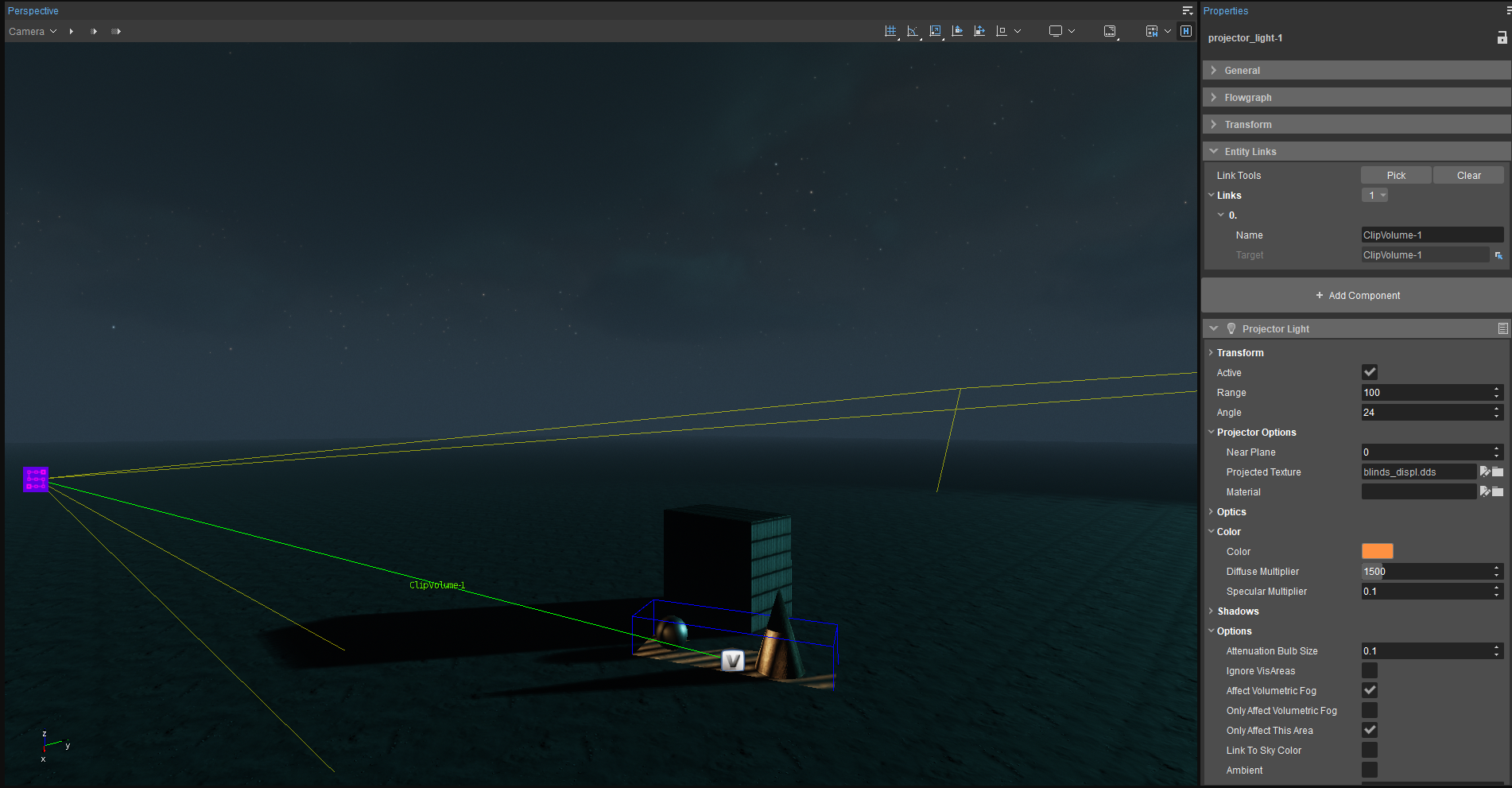 The intensity and color of lights can also be animated by assigning a value (other than 0) to the Animations → Style property. The playback speed of the active animation is set through Animations → Speed. There are numerous predefined animations including blink on/off and fade on/off at various speeds in both regular and irregular rhythms, and cycling through colors. Programmers can see, modify or add to these animations in the light shader (engineroot\Engine\Shaders\HWScripts\CryFX\Light.cfx). Non-programmers who want to create custom light intensity and color animations might want to just use Trackview.

If you want a Projector Light component to be included in SVOGI calculations, set it to Static (for non-moving entities) or Dynamic (for real-time bounce calculations, useful with entities that will move). You can also choose Hide if GI is Active to automatically disable a light whenever GI is activated.

There may be times where you want to extend a light of uniform brightness over a longer distance. You can accomplish this by using a large Attenuation Bulb Size value. In the example below, we've created virtual moonlight using a Projector Light component. Sun brightness is set to 200 to keep the moon texture visible while providing a bit of glow around the moon. The Projector Light component is placed far enough from the center of the level and ~430m above it with its Angle set to 180° so that it lights the entire heightmap. Since in real life the sun (and its light that reflects off of the moon) is so far away from Earth that its brightness is effectively even across the illuminated surface of the Earth, we've set the Attenuation Bulb Size to 5000m and its Range to 8000m so its brightness is completely even throughout the heightmap.

This is admittedly an extreme example to illustrate how the Attenuation Bulb Size property works. If you look closely at the terrain where the projector light is illuminating, particularly at its edges, you'll see why: you'll notice a very pixelated texture. Projector lights always use a texture, even if you don't manually specify one under Projector Options -> Projected Texture. Since these must be only 512x512 pixels, the low resolution of these textures will quickly become very apparent if projected over a large area, so it's unlikely that you would put a projector light so far from a surface. 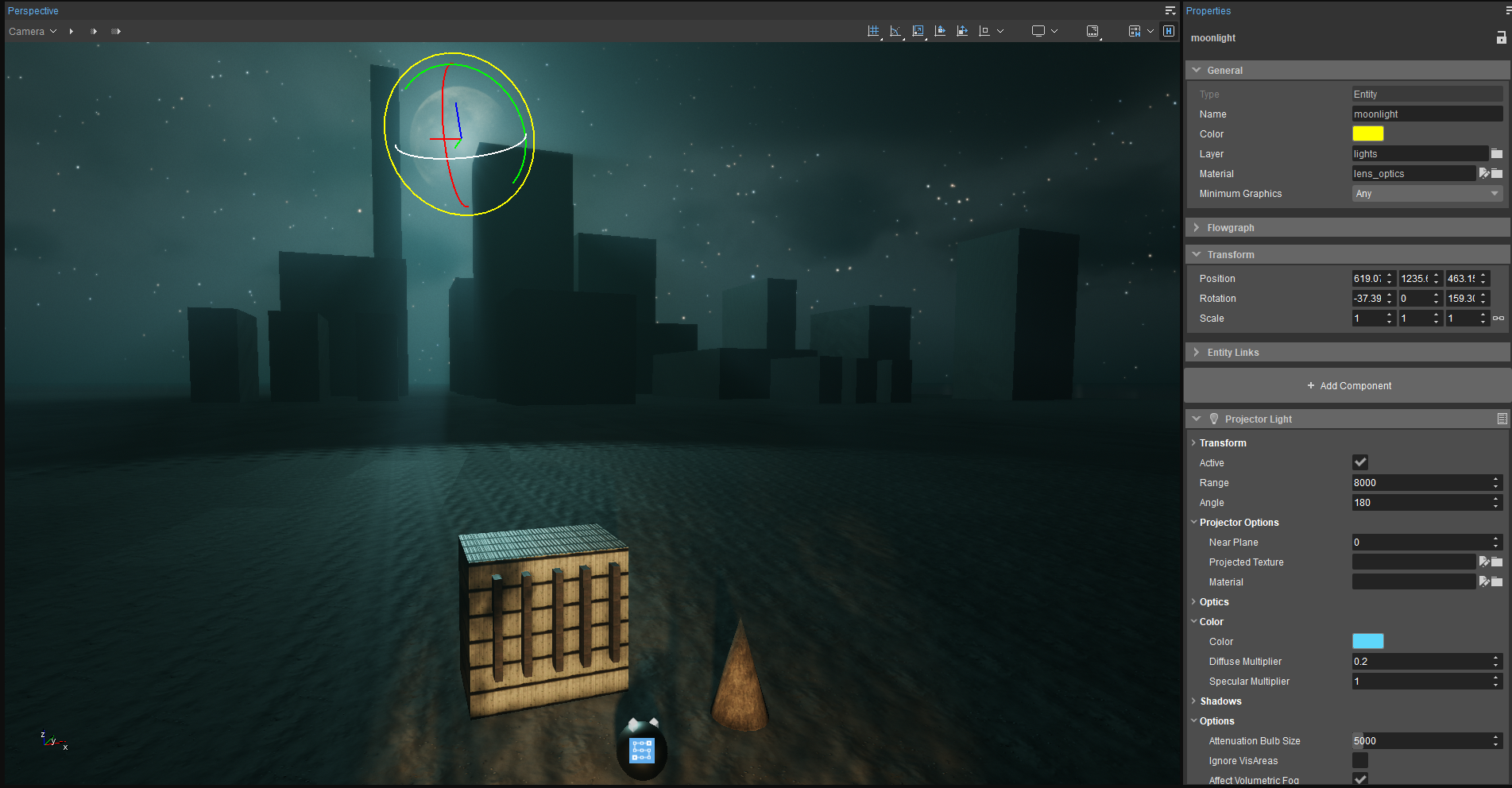