This chapter of the Audio Showcase tutorial serves as an introduction to the Audio Controls Editor (ACE) tool, audio triggers, and so demonstrates the basic workflow of implementing sounds within a level.

Click the file below for a downloadable PDF copy of this chapter.

The FMOD workflow of this chapter is also covered in the following video:

Begin by creating a new CRYENGINE project from the Launcher by selecting the +New icon shown in the image below. 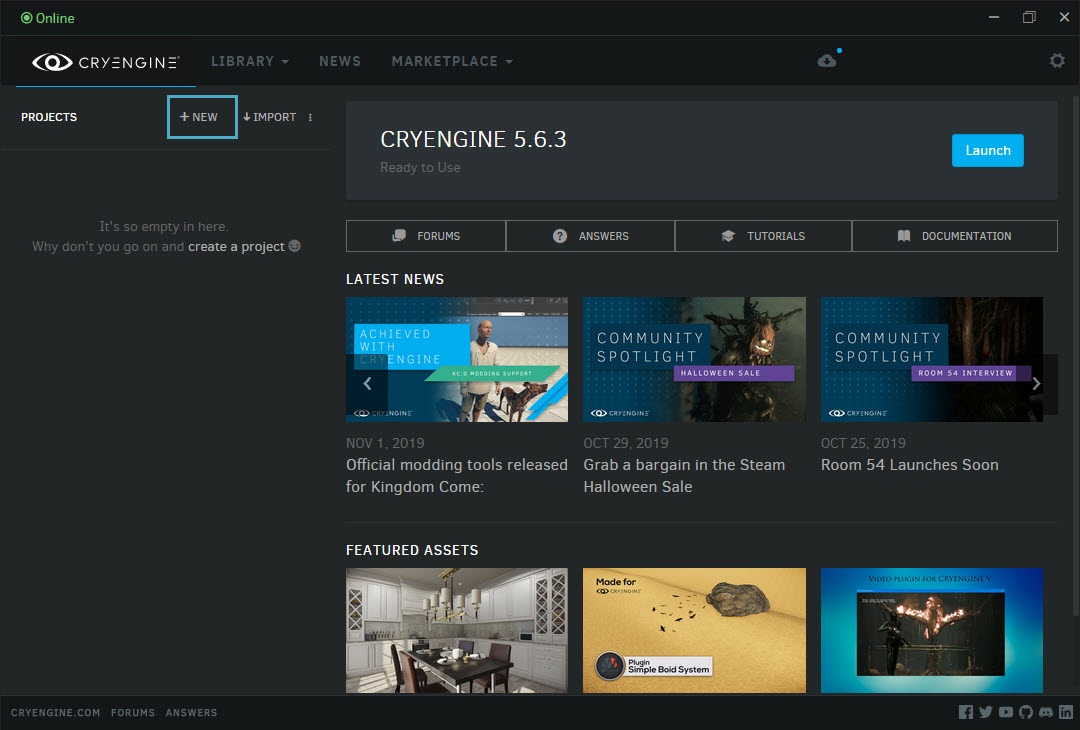 This opens the My Engines library which lists all installed CRYENGINE versions; click the +Create Project button under CRYENGINE 5.6.4 (assuming 5.6.4 has already been downloaded and installed). 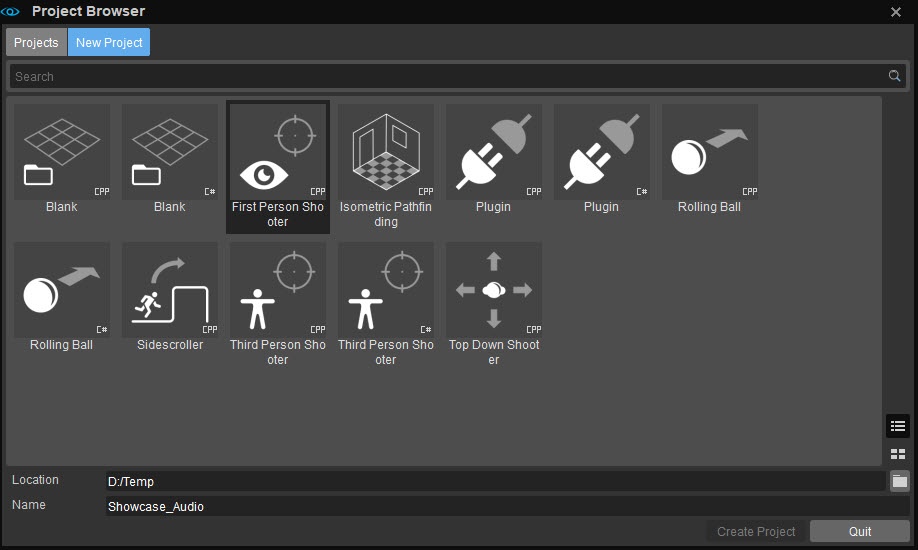 Next, navigate to the Showcase_Level.zip package and copy its contents to the folder of the project you just created. Be sure to select the Replace the files in the destination option in the dialog prompt that appears.

This is to not only replace certain files in the default First Person Shooter template project, but to also make changes such as deleting the reference to .animevents from the player skeleton, and setting sound_obstruction within the SurfaceTypes.xml to 0 for the purpose of this tutorial. 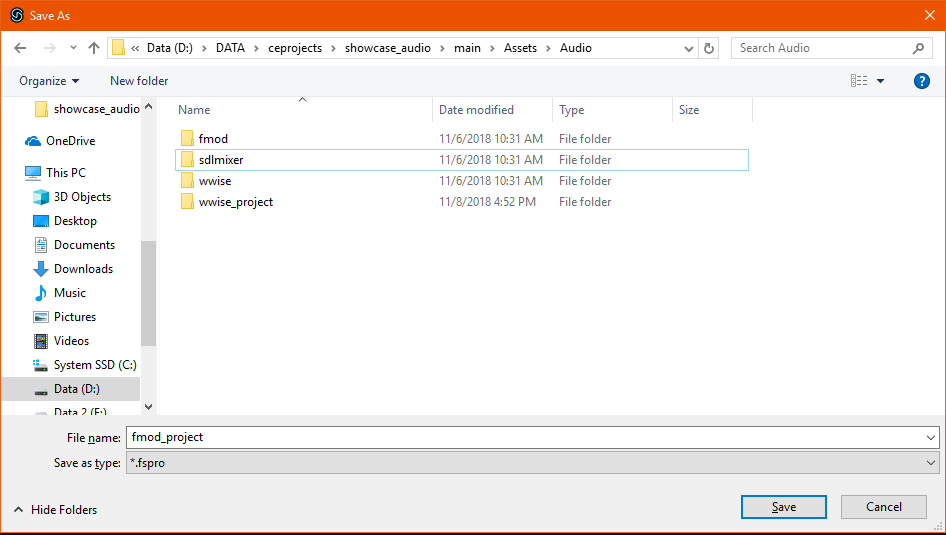 With your middleware setup, open the Audio Showcase level by selecting File → Open → Levels → Showcase_Audio from the Engine's main menu, or by opening the Game.cryproject file that was copied into your project directory.

Once the level has been loaded, navigate through it in first-person by switching to game mode (Ctrl + G). Move the first-person character using the WASD keys, aim and shoot using the mouse buttons. 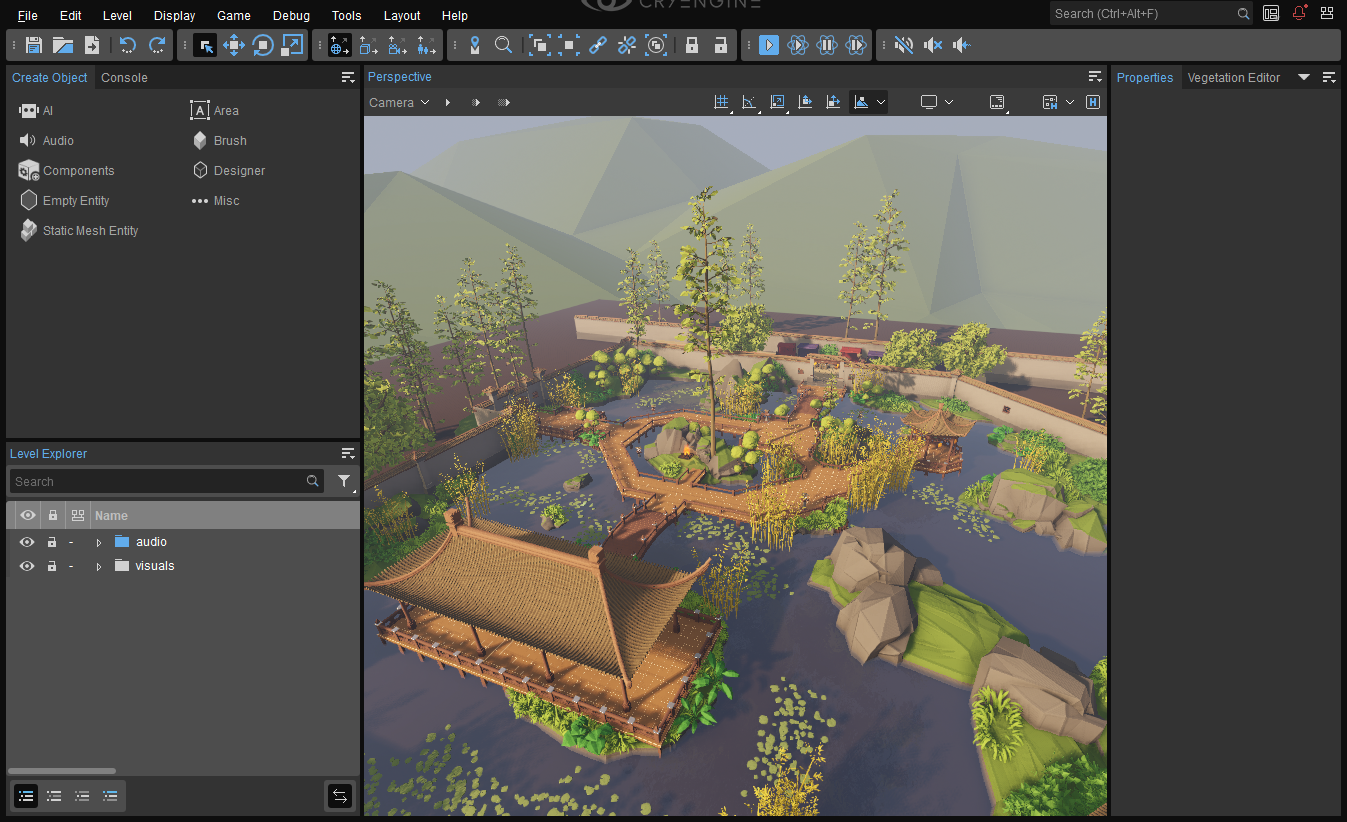 You'll find that the garden consists of a large pond within a walled area, plenty of vegetation and a campfire at its center. Also included are two pagodas connected by walkways, a marketplace situated behind a closed gate, and a forest surrounding the entire enclosure.

It's now time to familiarize yourself with the ACE, which acts as a connection between CRYENGINE and your audio middleware of choice.

Accessed from the Tools → Audio Controls Editor option of the Engine's main menu, the ACE consists of four panels namely, Audio System Controls, Properties, Middleware Data and Contexts; note that only the first three are relevant to this tutorial. 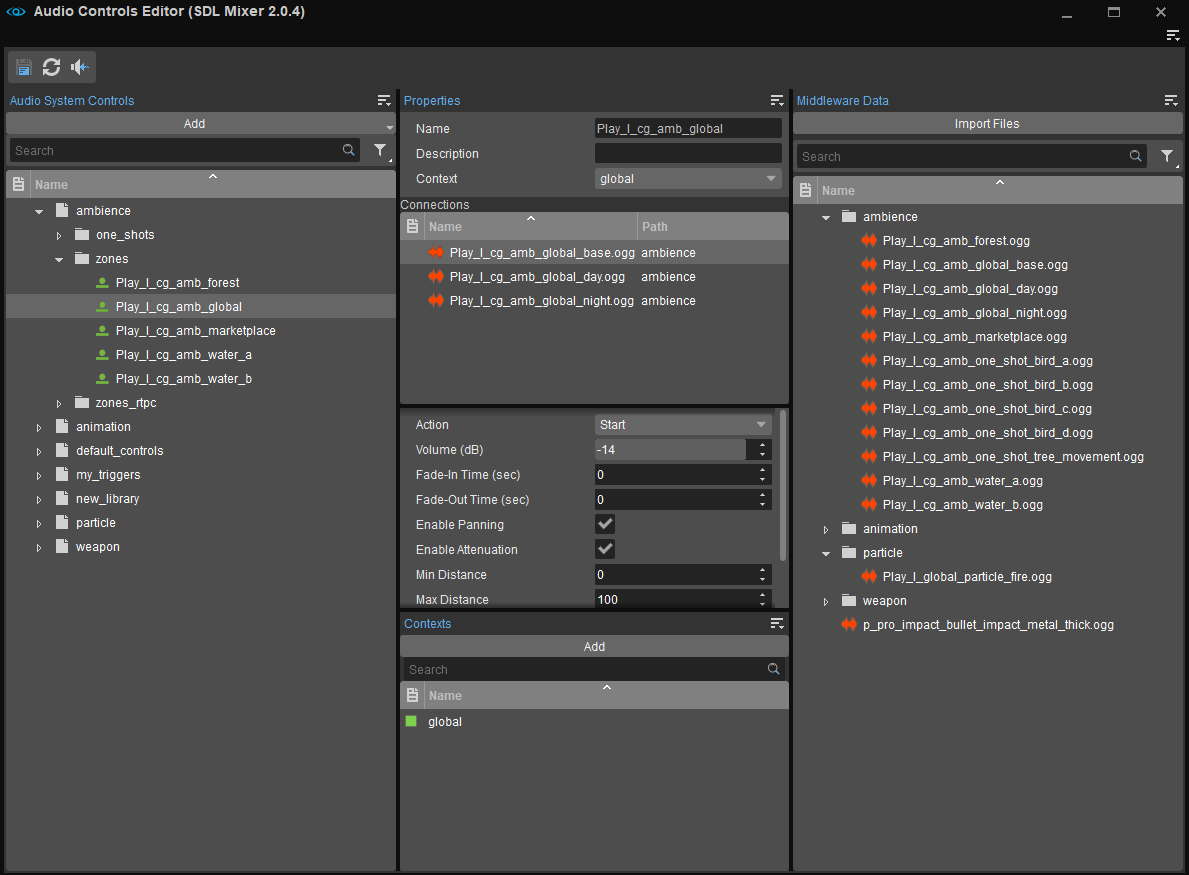 The properties of these controls can also be edited via the Properties panel.

You would have noticed that in game mode, clicking the LMB causes the first person character to shoot a weapon. The goal of this section is to add sound to gunfire that is triggered every time the player character fires the weapon.

Jump into Game Mode (Ctrl + G) and press the LMB to fire the weapon; on gunfire, the created Audio Trigger is called by CRYENGINE's visual scripting tool Flow Graph causing the Play_w_gun_fire_01 Trigger to play.

We now need the Play_l_cg_amb_one_shot_tree Trigger to play across the entire level, for which we use the Audio Trigger Spot (ATS) Entity. The ATS triggers audio Events at a specific position, which can be automatically randomized along with time delays.

It is found under the Create Object tool, accessed via the Tools → Level Editor → Create Object option of the Sandbox's main menu.

To have the Trigger execute more frequently, set the value of the Behavior field under the ATS Entity's Play Mode properties to TriggerRate.

This causes the Trigger to execute every 'x' seconds after the previous Trigger instance, where 'x' is a random value between the ATS'  MinDelay and MaxDelay property values. These fields are found directly under the ATS' Behavior property field.

Although the ambience trigger is called by an audio specific Entity (the ATS), triggers can also be called in the same way using animations, particle effects, or by code.

This concludes the first chapter of the Audio Showcase tutorial. The remaining chapters will have us implementing audio for player footsteps, particle effects and dynamic ambience.