This is part two in our particle effects tutorial series. Today we're going to focus on two concepts: Modifiers and Domains.

This tutorial builds on the concepts that we went over in part one of this tutorial series, so do make sure that you’re already familiar with what was covered there.

You’ve already been introduced to Modifiers in part one: the Curve Modifier (17:03) and the Random Modifier (18:26), but in this tutorial, we'll dig much deeper into them as well as the domains on which they depend.

You can start with creating a simplified version of the smoke particle we made last time, as explained in Part 1:

Image Added dropdown button to the right of Field:Size → Value. Here you can find all Modifiers whose main functionality is basically to modify the values of the feature to which they’re attached. Simple enough, but in fact this can get very complicated. 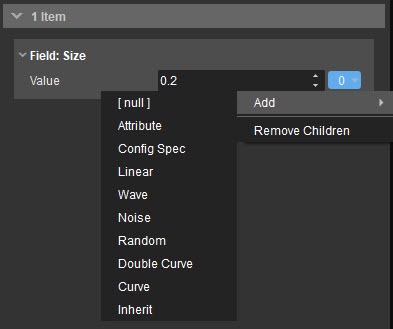 Now it's time to explore Modifiers. The first Modifier we're going to add is the one we used last time, which is simply the Random Modifier. If you drag the Random → Amount slider, you’ll see that we can vary this between 0 and 2... but what does the value 2 actually represent and how is it used?

This number essentially produces a range of random values, which is always from 1 minus Amount to 1. In other words, what you’re setting indirectly through Random → Amount is actually the basis of the minimum random value, but the maximum value is always 1.

At a Random value of 1, you’ll get randomized numbers between 0, which is 1 - 1, and 1. Those numbers are then multiplied times the value that you’re modifying, Field:Size → Value in this case, or whatever Modifier you’ve selected. And if you watch the particles spawning, indeed you can see their sizes ranging from a pinpoint up to their original size, but never bigger, because the maximum Random value is 1, and that’s multiplied by the original size.

It’s worth pointing out that this maximum Random value of 1 means you can’t make numbers any bigger, only smaller, so your original number should be the largest value you ever want to see.

Next, if you do the math, you’ll quickly see that if you set Random → Amount to a value larger than 1, your minimum values will start going into negative values, because it always subtracts this value from 1. To demonstrate that, we need to modify something other than Field:Size, because “negative size” isn't feasible.

Instead of modifying this Component that you've been building, let’s say you want to keep it as it is so if you change your mind later you don’t have to undo a zillion changes, you can make a copy of the entire Component by right-clicking on an area right beneath the Component’s title bar and choosing Copy, then clicking on a blank area in the Effect Graph and choosing paste, or pressing Ctrl + V.

Now we have two Components that do exactly the same thing. So, to make our life easy, we're going to name each Component by double-clicking on the titles. We will call the first one random size. And since we don’t want to see it for now, let's also disable one of the components by clicking the

In the image below is a ten meter ruler with the particle emitter placed in the middle of it. This will make it easier for you to see exactly what's happening:

This is actually the maximum distance away from the emitter where we want particles to spawn, but we also want them to appear randomly between the emitter position and five meters on the X axis. So we will need the Random Modifier.

You’ll see that the particles spawn at a random distance between the particle emitter’s position, which is a distance of 0, and up to five meters away from it in the positive X direction. Again, a Random → Amount of 1 generates random values between 0 and 1 and multiplies them by the original offset value of 5, so we get offset values from 0 to 5.

What if we also wanted to randomize the offset on the Y axis, but with a different range of values, like plus or minus ten meters?

We can’t do it with the same Location:Offset feature, but there’s a simple trick: we can add as many features as we like, so;

If you turn the Spawn:Rate up, you can observe exactly where the spawning is happening and that the particles kind of fill out their spawn area and stop floating away. When a 20 meter ruler is placed along the Y axis, you can see the particles spawning exactly within this five by ten meter rectangle.

In fact, if you explore the Location features, you’ll find out that you can spawn particles in the shape of geometric primitives, including circles, spheres, boxes, omnidirectionally, and even using a CGF mesh component that’s attached to the same entity as your particle emitter.

So in the case of our five by ten meter plane, a quicker way to do this would be to just use Location:Box and set its axis fields to 5, 10 and 0, from left to right: 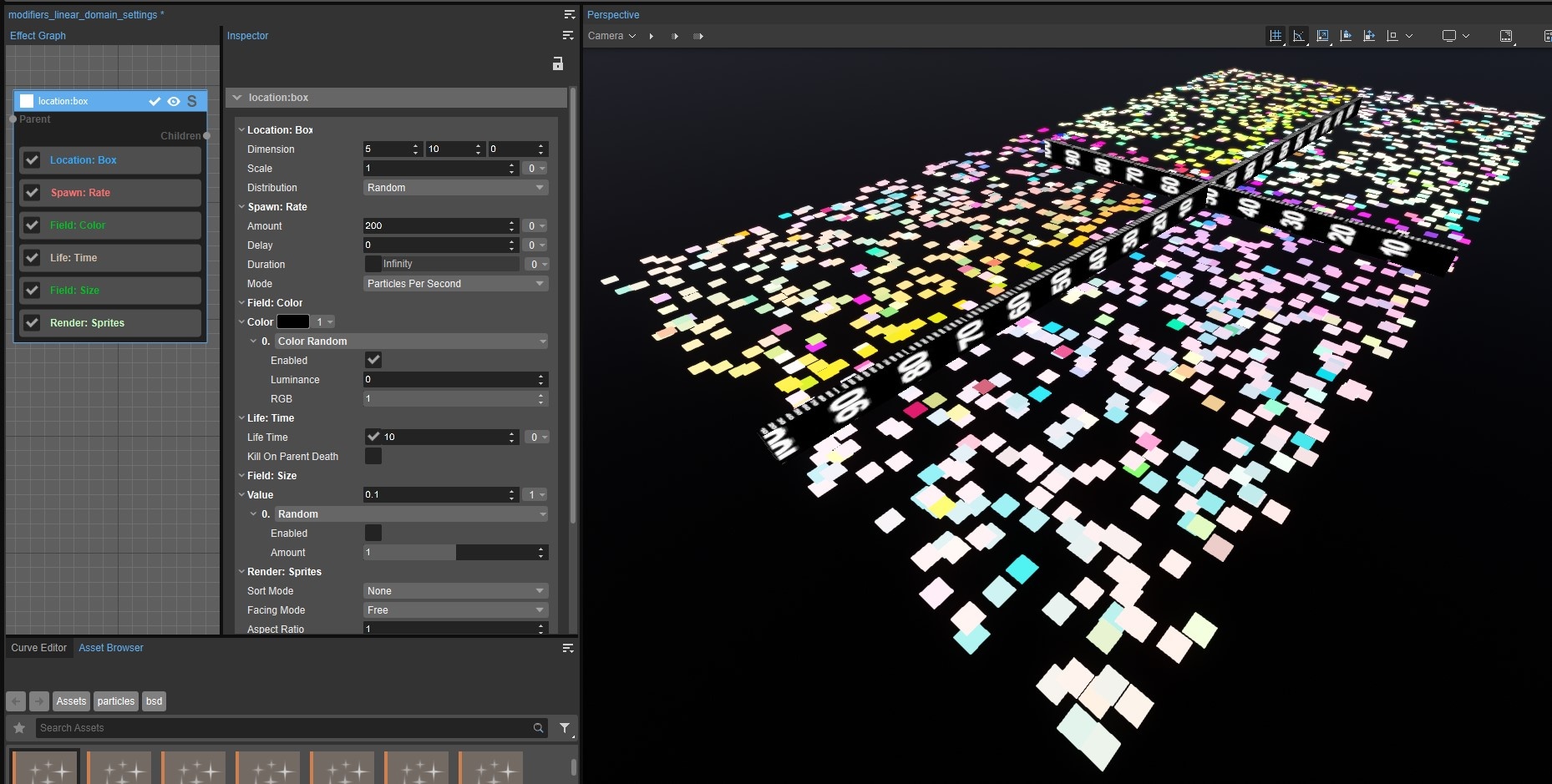 This kind of control allows you to spawn particles with complete control over their placement, like making it look like a window frame is on fire. As we’ll see, you can even distribute particles along a spline path.

We’ll check out these other location features later on.

Now we need to talk about Domains. 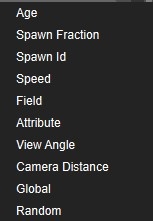 You were already introduced to Domains in the first tutorial in this series. Let’s look back at the Random Modifier by adding it to the Field:Size Feature again. This is one of the most simple modifiers, because it just has one parameter called Amount.

We’ve chosen a Curve Modifier because it gives you a nice visual representation of the Domain values, represented by the horizontal axis of the Curve Editor, but Curves can be used to modify other Domains as well.

For example, the default Age Domain is the lifetime of the particle represented on a normalized scale from 0 on the left side of the grey box to 1 on the far right side. 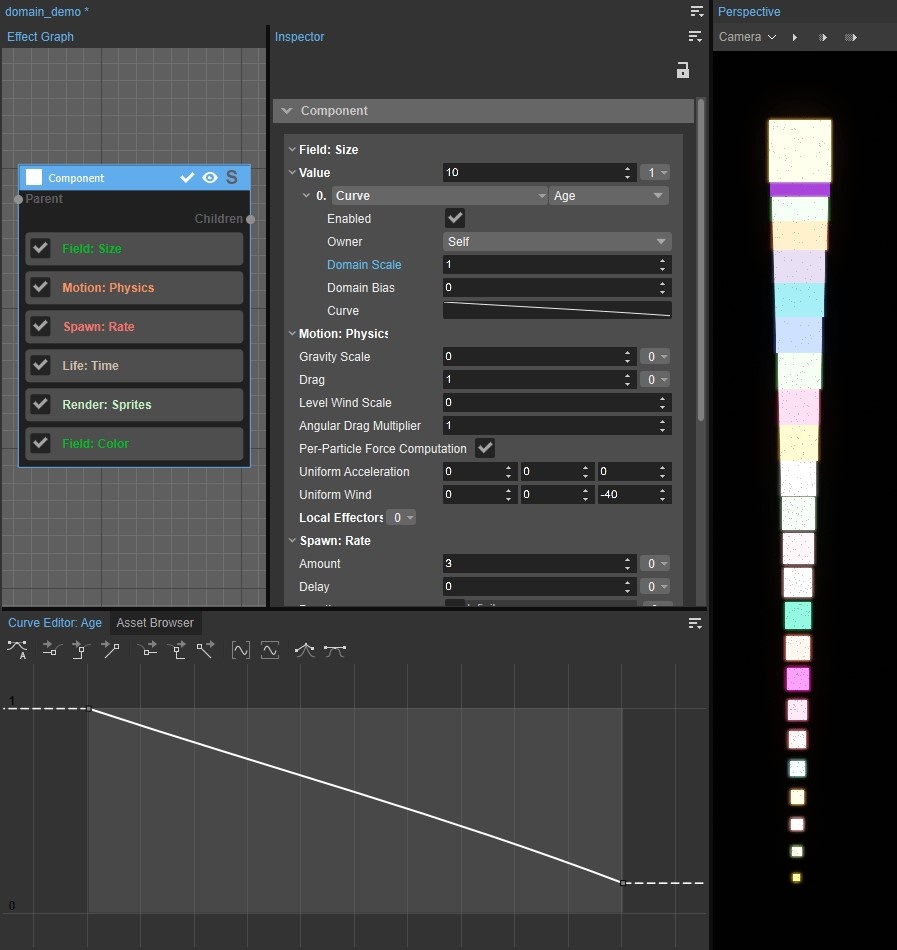 Now the particles simply shrink as they age. Age is the Domain that specifies the range over which Field:Size is being modified. It is of course a time-based Domain, but as you’ll see, there are plenty of Domains that have absolutely nothing to do with time.

If we look at this as a math formula, the final result equals Domain Value * Domain Scale + Domain Bias. Remember that multiplication always takes precedence over addition when you calculate the result. And that result is where we land on the horizontal axis when we’re looking at a Domain with a Curve Modifier.

So let’s experiment with these values a bit. Leave Domain Bias at 0 for now so it has no effect, and set Domain Scale to 0.5. That’s getting multiplied times an Age of 0 when a particle is spawned, giving us 0, and once again multiplied by our ending keyframe, which is 1. 1 times 0.5 gives us 0.5, so that means that this keyframe gets shifted over to 0.5 on this horizontal axis. And as you can see, at that point on the curve, Field:Size has only shrunk to about 60%, which is exactly what we see our particles doing. 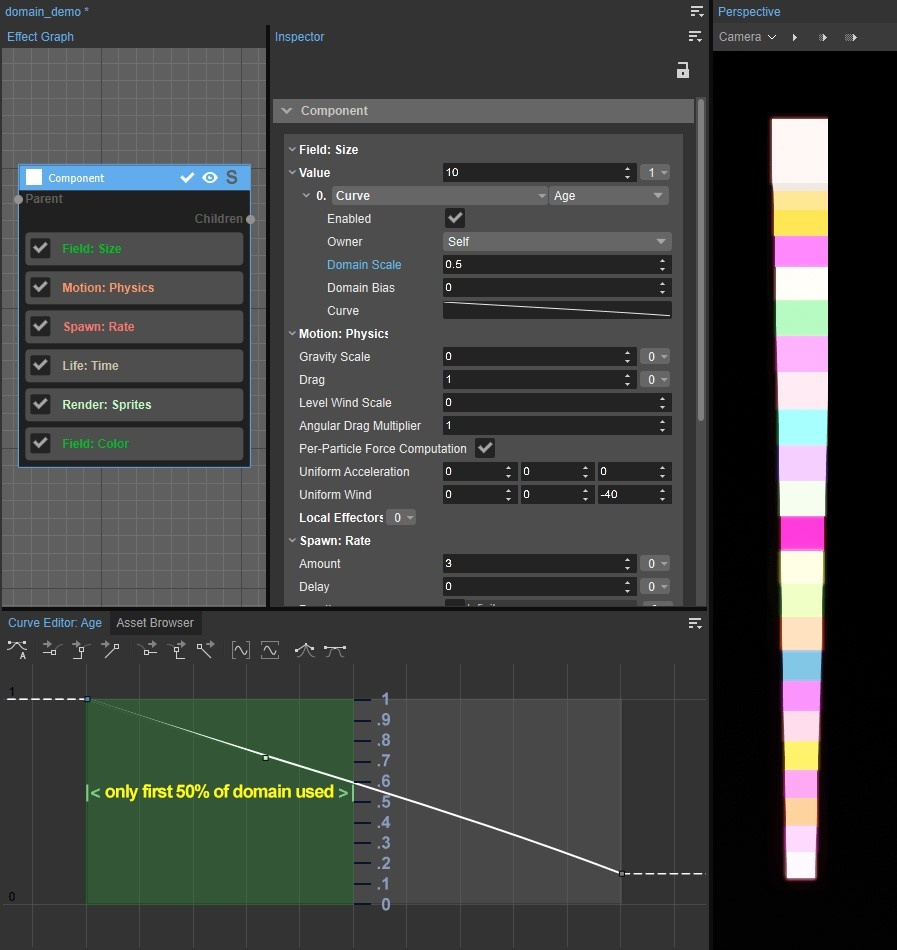 What’s tricky is that you need to think carefully about what values a particular Domain is going to give you to make sense of the result. Age is always normalized from 0 to 1, but other Domains will produce entirely different values, like speed in meters per second, or camera view angle in degrees, etcetera.

While we’re looking at curves, it's also worth pointing out that our Domain is represented on the graph by the lighter grey box. That grey box represents the only part of the Domain in which we can modify values by setting keyframes. But if you use your scroll wheel to zoom out on the graph, you’ll notice that it continues past this grey domain area.

Back in Domain Scale, we can actually put a huge range of values here, to plus or minus 999,999. Just remember that any values less than 0 or greater than 1 are completely outside of the grey domain area.

Now set Domain Scale to 2, and watch what happens to the particles: they still shrink all the way down to the final keyframe value 50% of the way through their Age, but then they just stay that way. 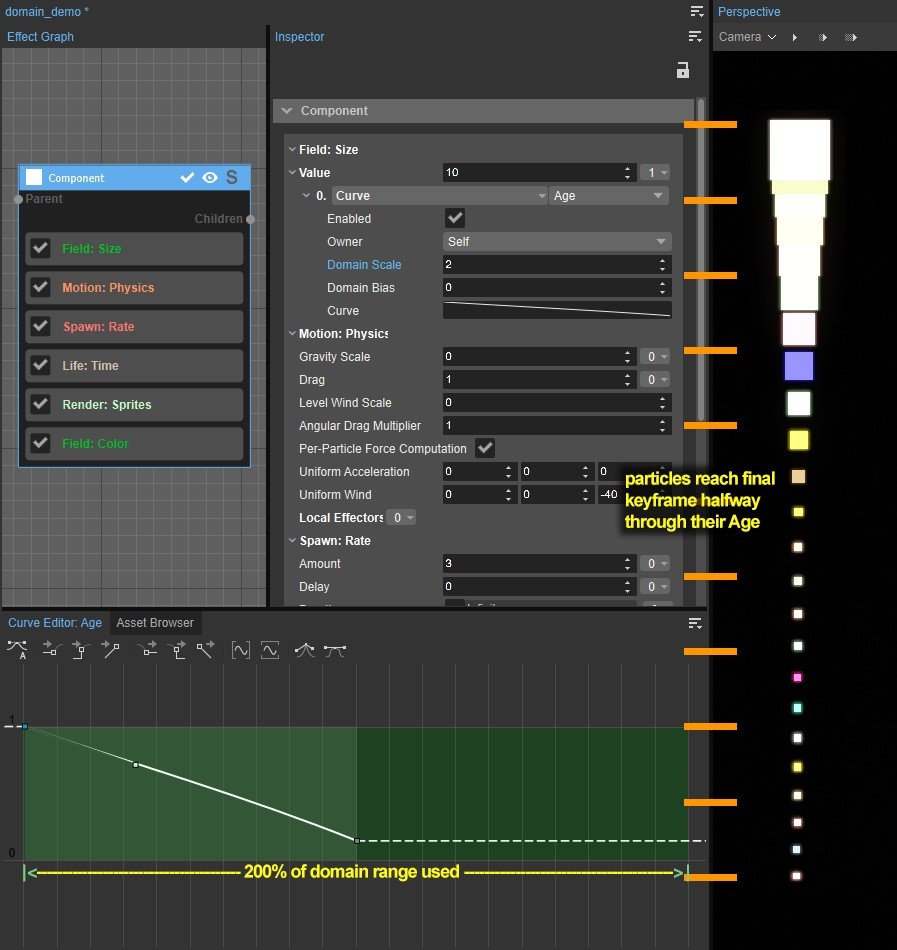 If you look closely, you’ll see that they reach that final keyframe value exactly halfway through their lifetime. This it not mysterious; it’s just simple math: the Domain Scale of 2 has been multiplied by the starting Domain value of 0 and the final value of 1. That extends our Domain all the way over to 2. Whatever our last keyframe value is, that value is just held for the rest of the domain, its second half in this case, which is why you see the particles shrinking in half their lifetime and then just lingering there.

In addition to setting Domain Scale, you can also add an offset to the horizontal axis using Domain Bias. Again, the Domain Bias value is just added to the original Domain values. For example, set Domain Scale back to 1 and set Domain Bias to 0.5, and now the Domain begins at 50% of the way through this curve when the particles have already shrunk about halfway. 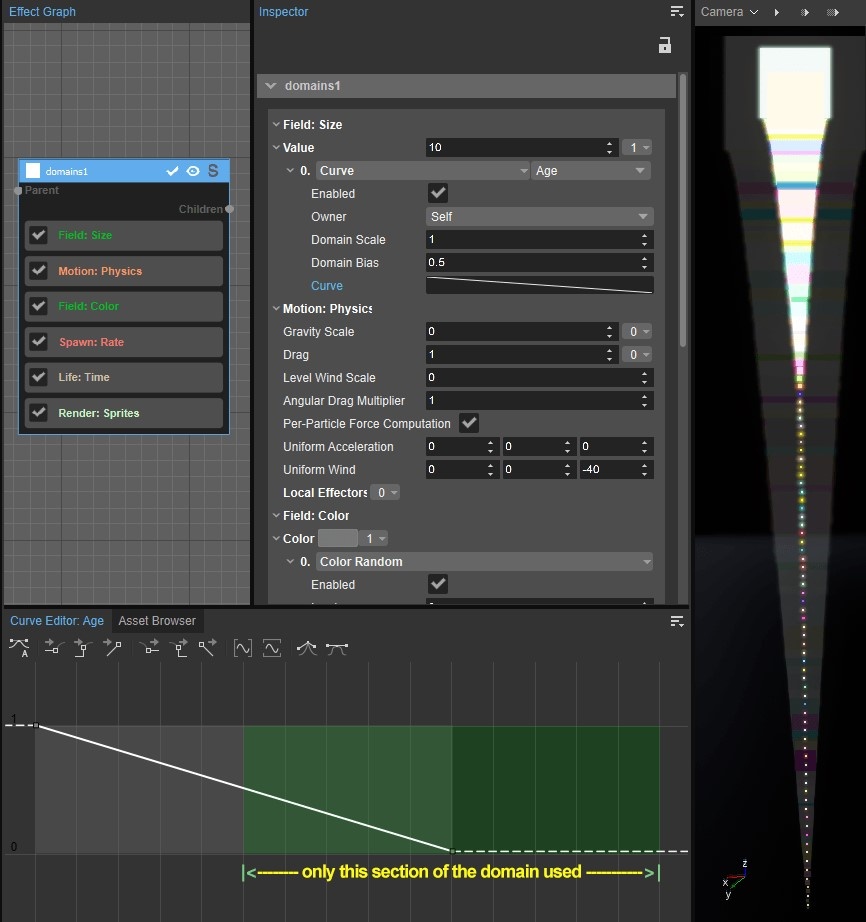 If we set it to -0.5 and zoom out a bit on the graph, you can see that Field:Size is holding the first keyframe’s value throughout the part of the Age to the left of the keyframe, and then only gets halfway through the decreasing curve before it loops back and start over.

The Curve Editor makes it easy to visualize these Domains, but with other kinds of Modifiers, we don’t have any kind of visual, so you need to know what’s going on and be able to visualize it in your head. We encourage you to play around with a wide range of settings and analyze what’s happening until you’re clear about why.

There’s just one more basic modifier that we would like to demonstrate in this tutorial, and that’s Linear. To set this up, we're going to modify the particle slightly:

So we’re back to the basis of something like a smoke effect. You should also set the tangents on these Curve points to be linear, so in the end, what we’ve plotted is a straight line that simply uses Age, which is a number between 0 and 1, as a multiplier for Field:Size. In other words, the particles spawn at zero size and grow linearly to the original Field:Size value.

Even though there’s nothing wrong with this approach, given the need to optimize performance at every step of game development, it’s worth asking what do you think is a more expensive formula to calculate: a straight line between two points, or a multi-keyframe spline curve? Even if the curve happens to be a straight line at the moment, it’s still calculating using a formula that’s capable of handling a spline curve with many keyframes, and that is definitely more expensive than a straight line between two points.

Since we’ve just plotted a one-to-one relationship between Field:Size and Age, there is a more efficient way to do this, and that’s where the Linear Modifier comes in. 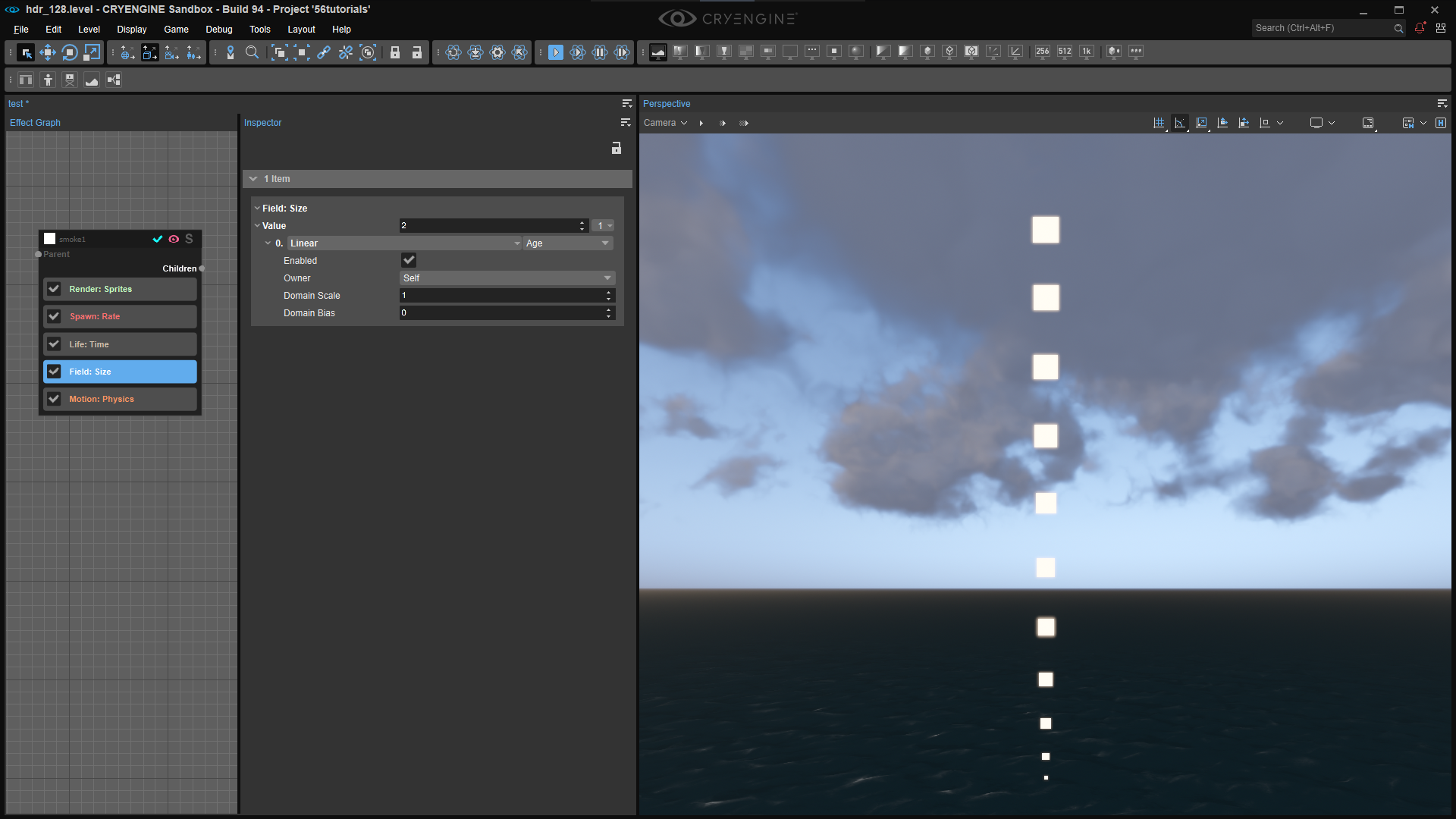 All Linear does is simply passing on the values from the Domain, which you can then modify further with Domain Scale and Domain Bias. So if you compare these two methods, you’ll see that Linear gives me exactly the same results but at a much cheaper cost.

You can and will assign many Modifiers to a Feature, even the same type of multiplier at least more than once. Each of them is simply multiplied by the others, so the order doesn’t make any difference.

That’s it for part two. In part three, we’ll dive into some more complex Modifiers.