Oculus Rift support is now included in CRYENGINE 3.8.1 and beyond. This article will guide you through setting up VR and any important information you should know before you get started.

The Sandbox Editor does not currently support the Oculus Rift device. To run CRYENGINE with the Oculus enabled, you must do so through the CRYENGINE Launcher (GameSDK.exe). 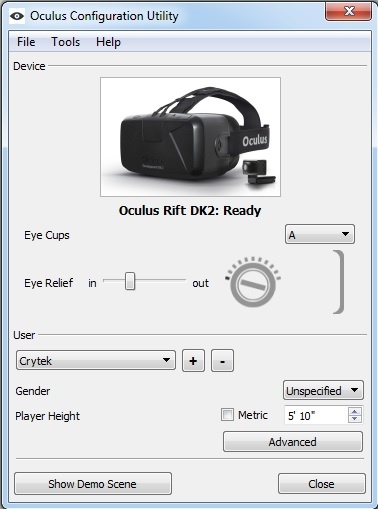 To help preserve the lifetime of your kit keep the Rift Saver enabled. 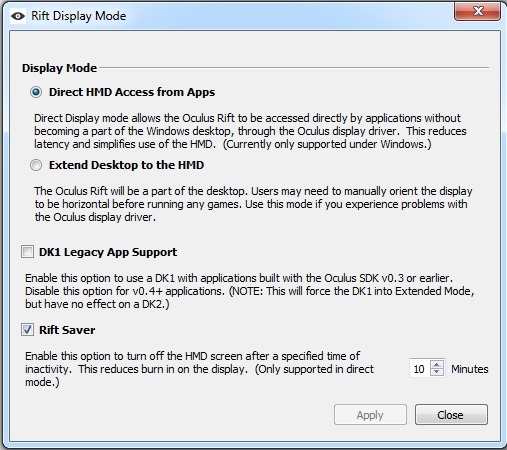 Once you have completed the set-up above and your device is working and initializing properly with the Oculus Demo test scene, then you are ready to use the device with CRYENGINE.

Click the "Show Demo Scene" button found at the bottom of the Oculus Configuration Utility to test if the device is working correctly. This tool Should appear in your system tray.

The process of enabling VR in CRYENGINE has been designed to be as simple as is possible. However, as CRYENGINE is shipped to also function in non-VR mode we cannot initialize everything for users i.e. 'VR out of the box'. Some configuration files are available to users that will set the required parameters so that the relevant engine features are initialized and the VR mode will run. If you are making a purely VR-based game then you can make these values your default settings.

When using VR, your build should look something like the following screenshot:

Notice the extra file in the root of the folder. The user.cfg is a file that the engine will always look for on boot:

This file is used to initialize the engine to run in VR mode. The file can be download by clicking the link above.

We didn't include this file into the build by default because you may already have a specific user.cfg in use and it would've been replaced accidentally. Therefore, please download the user.cfg linked above. You can then add the appropriate CVars from the downloaded file into your own user.cfg.

The vr.cfg is a new file which we have created and contains the relevant CVars that will initialize once the launcher (GameSDK.exe) has been loaded & in the main menu. We had to separate the vr.cfg from the user.cfg because we are modifying certain CVars that will be reset if placed in the user.cfg, on engine load.

This is stored in the folder: <root>\engine\config\vr.cfg (inside the engine.pak)

Click here to expand for an explanation of why we do this...

This is because the system spec configuration files (sys_spec 1,2,3,4) are loaded after the user.cfg

Build\engine\Config\CVarGroups\sys_spec_Full.cfg sets the required CVar groups as per system spec. (Default is sys_spec 4)

A portion of this .cfg calls another file Build\engine\Config\CVarGroups\sys_spec_PostProcessing.cfg

This is where the r_motionblur is set back to 2

Due to the order in which files are loaded i.e. user.cfg first, then sys_spec_Full.cfg second is why we need to separate out some of the CVars from the vr.cfg

This configuration file (*.cfg) contains a list of CVars that are required to be set at engine boot/launch.

Height is unaffected so remains at 1080.

This configuration file needs to be executed once the game has been launched and is sits inside the menu front end.

You should already be in the dual rendering mode, where the screen is displaying the dual eye set-up on the monitor and both eye viewports on the Oculus Rift device are active.

To execute the vr.cfg, bring down the console with the ~key and type: 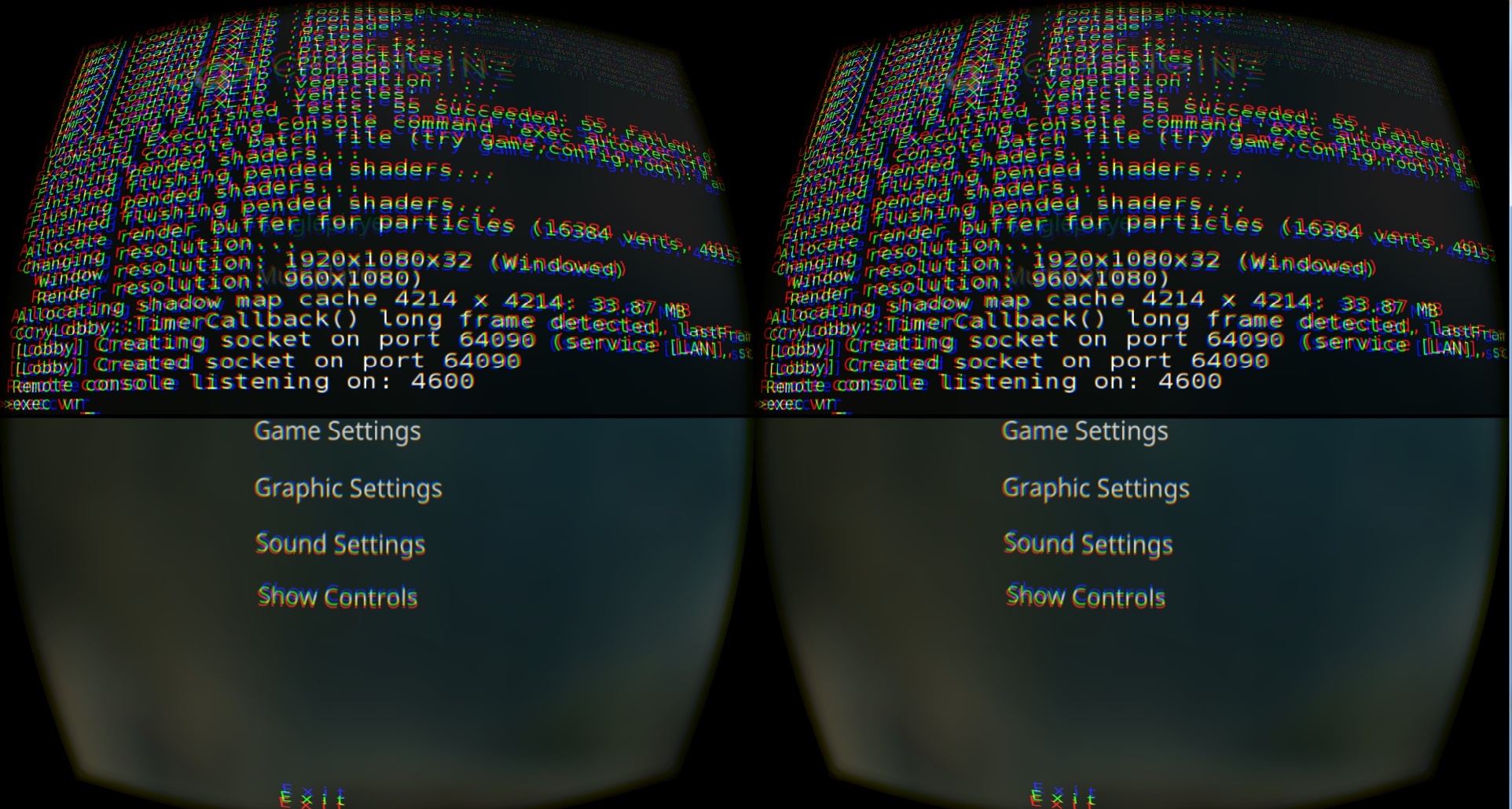 This will process the vr.cfg, and set all the CVars that are contained within the .cfg file.

Say your "default pose" is sitting down in a normal comfortable position looking directly at the tracking device. But;

On boot of the launcher (GameSDK.exe) the headset has been left on a table. This is not the recognized "default pose" of the Oculus device so when putting the device on it is not in the correct forward view.

To reset - put the headset on and bring down the console with key ~ and type:

Resetting can be accomplished as often as you like during a game session. However, resetting is generally not necessary and is only required if the Oculus device and the tracker unit get out of sync.

If so desired you can bind this directly to a key/gamepad button. This can be achieved via Flowgraph Input:Key node.

We have exposed some controls / functions that are related to the HMD device. This can be accessed through Flowgraph:

The node outputs the YPR of the HMD device.

This allows you to hookup an input to trigger the RecenterPose command.

Possible issues you could encounter