Character ropes can have multiple purposes, and can mainly be used for cloth and physicalized entities attached to characters. The majority of a rope setup and its properties, actually correspond to cloth setup as well so both setups should be considered and read through.

An example of a hierarchy; Rope3 is a physicalized rope.

For more information on character ropes and cloth please refer to the following pages: 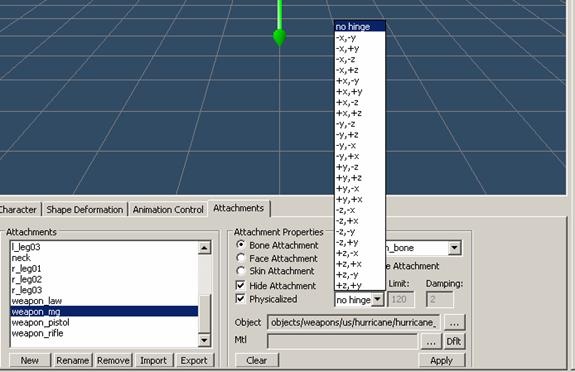 When adding CGF bone attachments in the character editor, you can create hinge joints to give the rigid attachments a realistic, secondary motion. Select the bone attachment, then check Physicalized, select a hinge rotational axis, and specify some values. It takes some trial and error to get it right, but the results are great.

The option exists to setup joints which simulate a jiggle, and this can be used to simulate various parts of a character. For information on how to set this up, please visit: