The SmartObject system is used to create general and level specific behaviors. The term SmartObject describes an object that is set up to interact with one or more other objects in the game.

Specific rules can be created that define which object will interact with which other object. These rules are based on the class and state of an object and apply to all objects in the game completely independent from the object model or the level the object is placed in.

The SmartObject system can be used for:

The Smart Objects Editor is integrated into Sandbox and can be opened from the "View/Open View Pane" menu. This is the tool that is used to create and edit all rules. 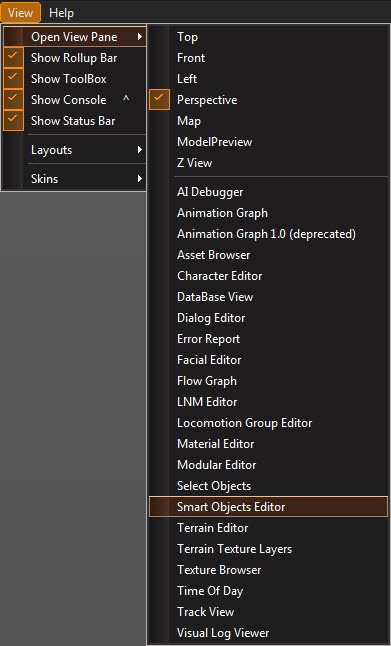 The UI of the Editor is split into four parts: 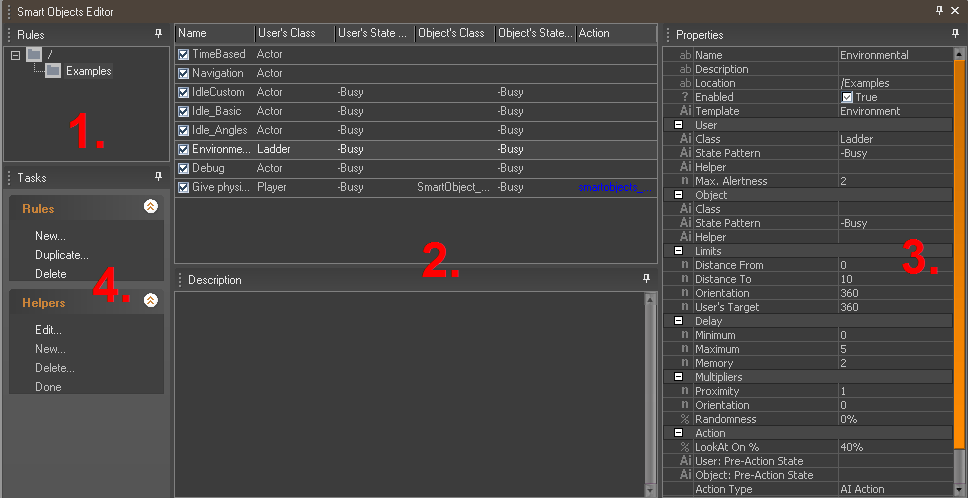 This window provides an overview about all existing SmartObject rules. The explorer-like display helps organizing your rule sets.

The details of a SmartObject rule can be viewed in this window. While the lower part of the window shows a description of the selected rule, the upper window part provides an overview over all rules in the currently selected folder.

Rules can be moved between the different folders by dragging and dropping them to the desired place. Greyed out rules are currently deactivated.

Rules can be sorted by clicking on the buttons on the top of each column. To hide or add columns, right-click on the buttons and select the desired column.

The Properties window contains all settings that can be made for a rule. The settings made in this window determine which action will be executed and whether the rule is valid or not.

The Tasks window contains all controls to create, edit and delete new rules and helpers.

A SmartObject rule describes the relation between two SmartObject classes. Whenever the conditions of a rule is matched, a specific AIAction will be executed.

A SmartObject rule consists of:

SmartObject helpers store position offsets within a SmartObject class. These helpers can be accessed from within an action graph using the 'SmartObjectHelper' node which outputs all neccessary information. Can also be accessed for example from the Exact Positioning Parameter group Animation and Approach Helper.

A helper is always attached to the SmartObject class and is in no way related to the entity model. Every AIAction can automatically access all helpers, no matter what class they are attached to.

In helper editor mode the following operations are available: 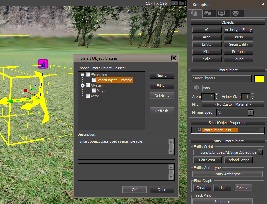 To add a new helper to a SmartObject:

Whether an entity can be assigned a Smart Objects class or not can be seen in the properties window of the entity.

If an entity has more than one SmartObject class, every rule which is assigned to this class will be applied to this entity. 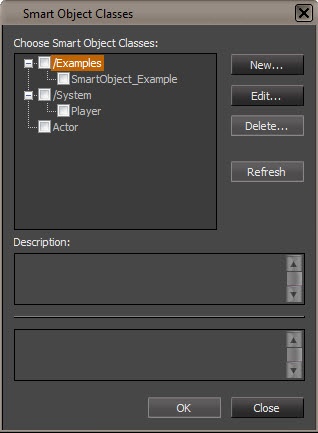 The main difference between a normal Flow-Graph and an AIAction is that an AIAction is limited to use only the user and the object of a SmartObject rule as target entities within the graph.

Whenever a new AIAction is created two nodes will be added to the graph automatically: 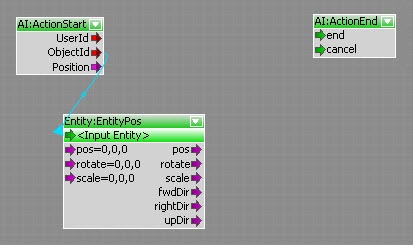 The only entities that can be used are the user and the object entity of an SmartObject rule. Although every other entity can be added to the action graph, only user and object entity ID's are valid.

Whenever an AIAction is started, the ActionStart node outputs the ID's of the user and the object on the according ports. This pulse can be used to trigger all necessary nodes, just like in a normal graph. 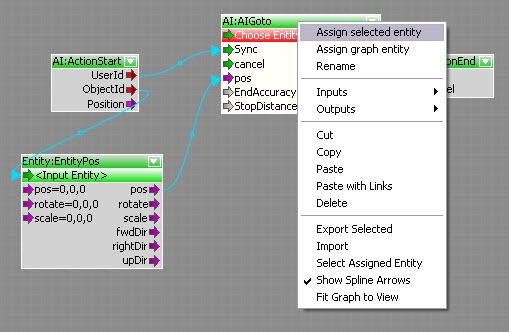 Using the context menu to select the target entity. 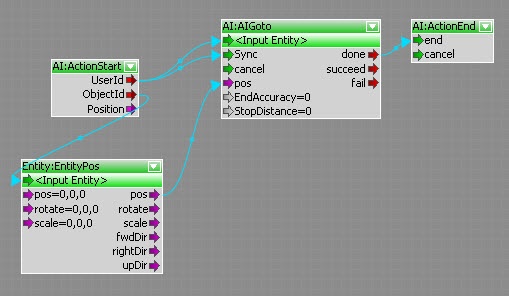 Like normal Flow-Graphs, AIActions can be categorized in different folders.

To place an AIAction into a folder, open the context menu on the action in the 'Flow Graphs' window and select the 'Change Folder' option. A new folder will be created when the a new folder name is entered.

For both the user and the object entity of a SmartObject rule a state pattern can be selected. If this pattern is matched the according AIAction of the rule is being executed.

A SmartObject class is not limited to have only one state. You can create as many states for a class as you want.

A state pattern consists of a set of sub patterns which each contain two sets of states, an 'Include' and 'Exclude' set. The 'Include' set determines which states have to be set.

A state pattern consists of an 'Include' and an 'Exclude' set

To modify a state, a state pattern has to be set for a SmartObject class. All states in the Include set of this pattern will be added to the class and all states from the Exclude set will be removed. This pattern for example would remove the states 'Observing' and 'PrepareCombat' from the according entity and add the states 'Alerted' and 'Combat'

The states of an object can be changed in different ways:

Using the Pre- and Post-Action Settings

The pre and post action settings in the rule properties can be used to set the states. This is the fastest way of setting states.

The AIModifyStates node can be used in action graphs or normal graphs to modify the states of an entity.

Setting the State in the Scripts

You can also modify the SmartObject states using a LUA script any time. You have to provide the entity ID and the state pattern string as parameters.