This tutorial will guide you through the transition editing in the mannequin editor. It uses samples that are part of the SDK. Feel free to follow along with the step by step instructions.

Tutorial3 picks up from the end of tutorial2: you will notice that a small number of fragments with tags are already created for you.

We will now show how to set up a Transition between different fragments and where to find these transitions.

At any time in the tutorial feel free to play the current sequence using the playback controls. 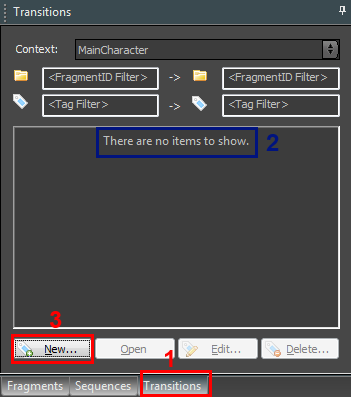 Now we need to select the fragments & tags in between which we want to create a transition. 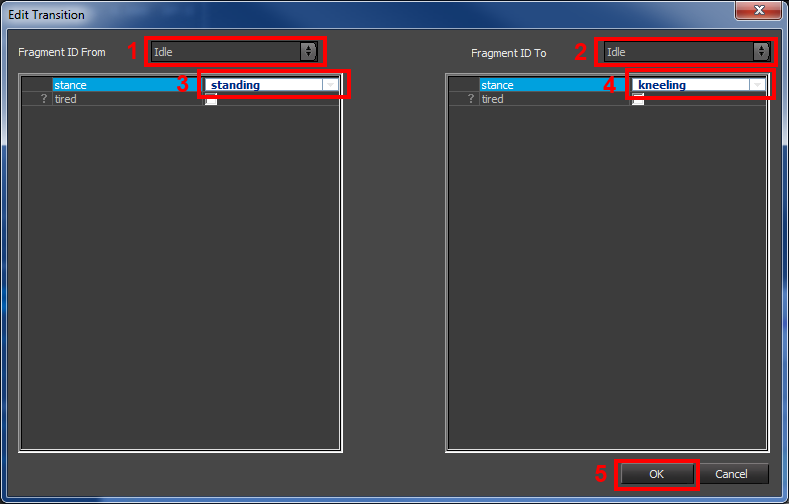 You can create a more general transition by leaving fields blank. For example say you'd like a transition from Idle (kneeling) to any other fragment, you would leave the "To" FragmentID field blank. Similarly, if you keep all tags unchecked it means you don't care about which tags are set.

The transition we just created opened up automatically. 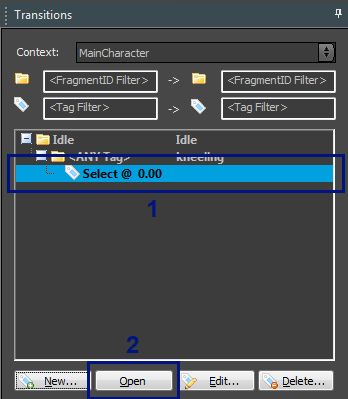 Using this window we need to tell the system which specific fragments we want to show as "From" and "To" fragments. This is because without specifying an example From or To fragment we cannot give a decent preview. The window looks very similar to the Edit Transition window: 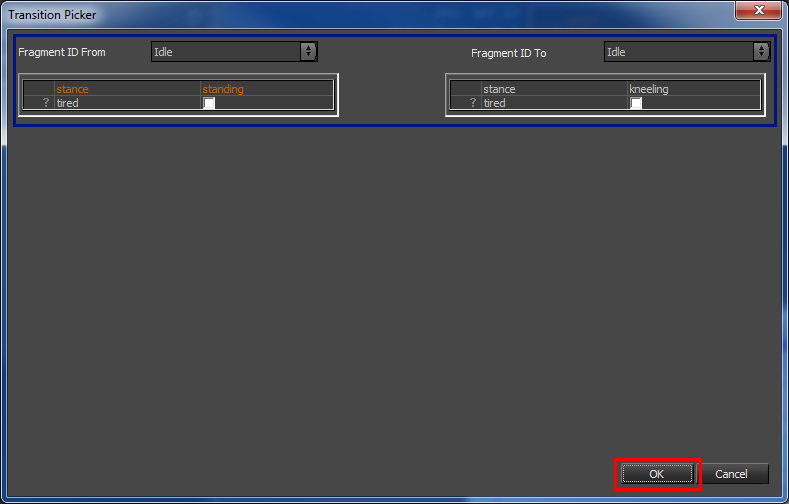 The transition we just created shows up in the Transition Editor on the right.

To get a better idea where this default transition time comes from let's open up the "Idle (kneeling)" fragment in the fragment editor by right-clicking on it to open up the context menu and then selecting "Edit Fragment". 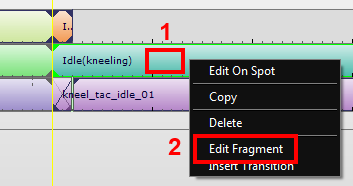 This automatically opens up the selected fragment inside the Mannequin Fragment Editor.

Now by making a transition we can override this default, which is why we created this specific transition in the first place.

What did we do now? By dragging this divider we override the default blend-in time which we saw above (if you flip to the Fragment Editor at this very moment you will see that the blend-in time in the actual fragment is still the small one we had before). So whenever the game requests this specific sequence of fragments the new blend-in time we just specified will be used instead.

Drag the second clip to the right:

Double-click somewhere after the beginning of the orange Idle->Idle block to create a "None" animation clip:

Congratulations, you set up your first transition!

Creating a New Transition (from the Previewer)

There is another way to create transitions which is good to know about: you can create them directly from the Previewer, you don't need to go to the Transition Picker.

Let's use this other method to set up the transition to stand up again from kneeling pose. 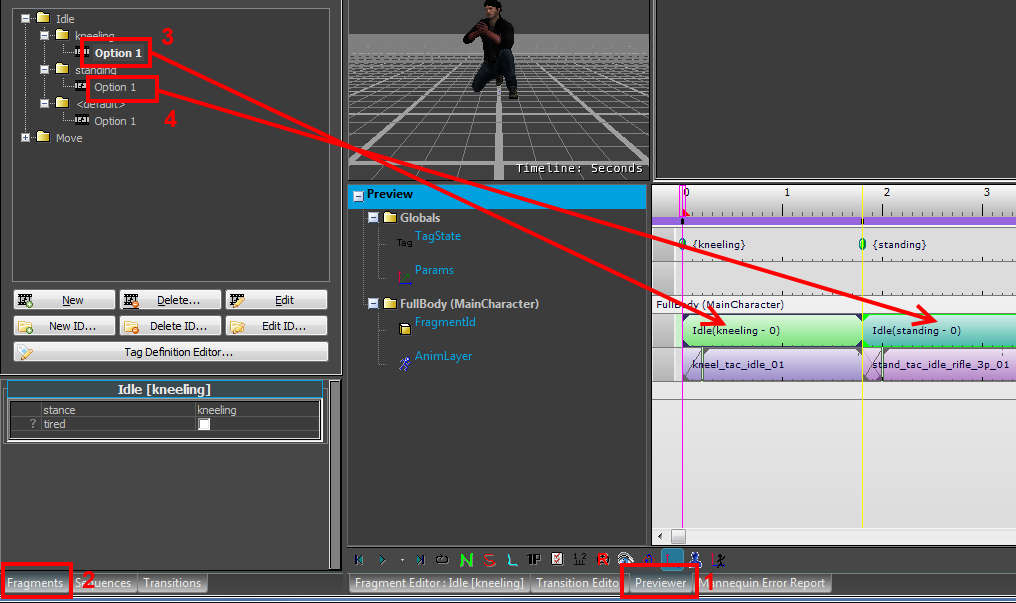 A Create Transition window pops up. It will automatically fill in parameters to create a transition from the previous fragment to the currently selected one. In our case the automatically created settings are fine, so we just press the "Create" button: 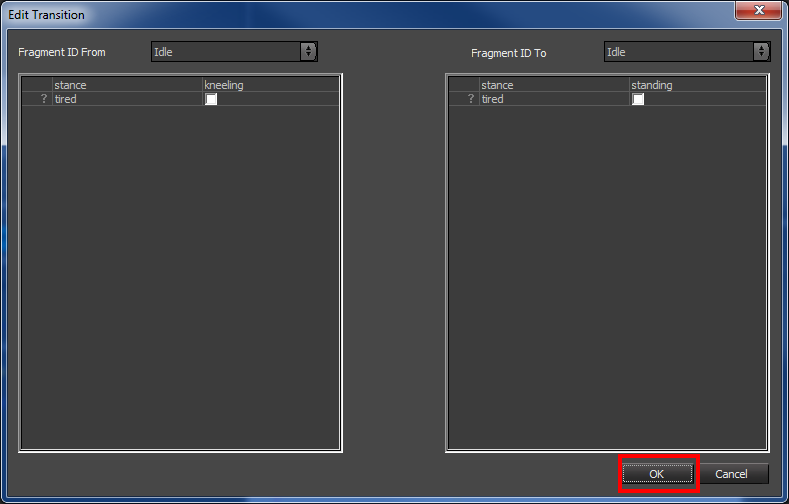 Using the same steps as before, go ahead and try to create the transition to go from kneeling to standing yourself:

And there you go, second transition created!

In the transition picker you can look for transitions by specifying part of the name of either the FragmentIDs or the tags involved:

Transitions To and From Anything

As a side note, when you do not specify a From or To fragmentID the transition shows up as respectively an "<Any> to" or "to <Any>" transition (these are sometimes also called "Into" and "Exit" transitions).

In the example below we have:

As we saw in the section on trumping, sometimes a transition gets delayed to the end of the previous fragment. This is the default behavior if the previous fragment is not looping. Typically you want to start the new fragment a little bit before the previous one ended though. If we want to do this we need to create a CryMannequin transition and next move the "orange block" to the point where we want it to be. This changes what is called the Earliest Start Time. This can be hard to envision, so let's work on an example.

First we need to prepare a fragment that is not looping. Let's simply change our "Idle (standing)" fragment: 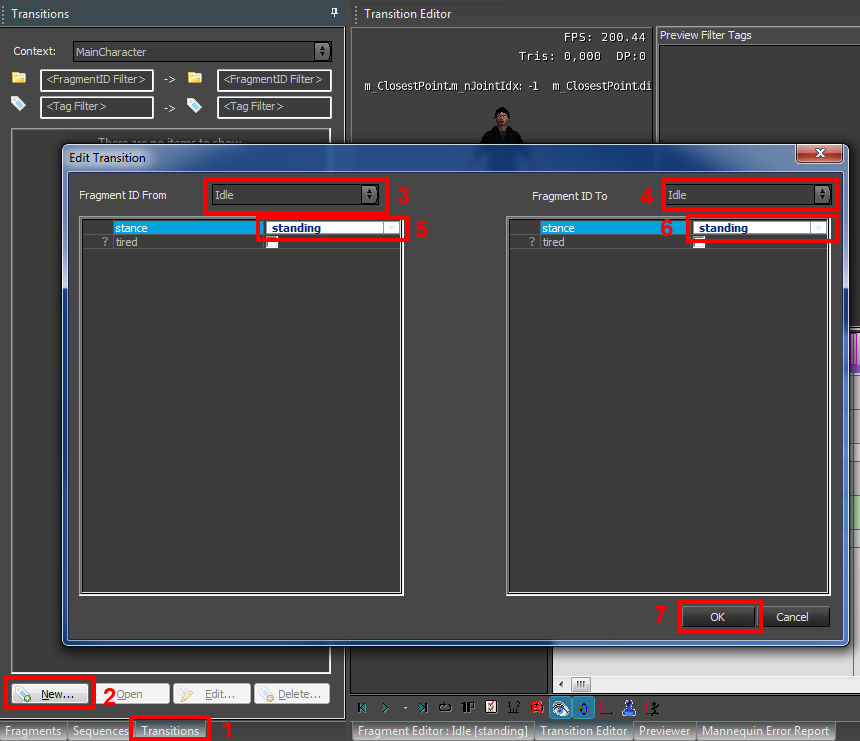 The transition should open automatically and it should look like this:

It's not immediately apparent, but if you move the "Idle (standing)" fragmentId to the left you will see that the transition itself is delayed:

This is the result:

Notice how the second animation only starts after the first is finished, not immediately when we request it.

As before, this is because the default transition behavior when coming from a non-looping fragment is to wait until the end of the fragment.

Now we want to actually start the transition earlier, so we move the "earliest start time" key on the TransitionProperties track a bit back in time:

And the result is that the transition starts earlier:

The Earliest Start Time is stored as a value relative to the end of the previous fragment, which is why it is -0.24 in the previous example. In the advanced section on Cyclic Transitions we see an exception to this though.

Here is an example of how this could look:

If you need to set up a transition coming from a looping (or parametric) animation, you might want to treat the Transition Select Time relative to one cycle (or segment) of the animation clip. If the fragment changes duration (possibly even at runtime for a parametric animation), the select time would automatically adjust in the proper proportion.

You do this by selecting Cyclic in the transition properties. This turns the select time into a number between 0 and 1 instead of a number in seconds.

Here is an example:

Unless marked as locked (see next), cyclic transitions will always trump the previous fragment, regardless of action priority. The Earliest Start Time is thus effectively ignored. See Mannequin Trumping for more details.

We saw that it is possible to delay transitions to a certain point in the animation in the section on the Earliest Start Time. By default this 'earliest start time' is relative to the end of the previous fragment; but this doesn't work when the fragment you are coming from has no clear ending, for example when it ends with a looping clip. You might want to set up a transition that comes from a run cycle and you only want to trigger this transition when the preceding animation is in the second half of the run cycle. To make this work you need to check both the Cyclic Transition and Cyclic Locked flag. From then on the earliest start time is stored in a 'cyclic' way: the time restarts at 0 after each cycle.

Outro transitions are deprecated and will be removed in a future release of the engine. We instead recommend that you use a dedicated intermediate fragment in the situations where you might have used an outro transition.

In many cases a transition to <Any> (see Transitions To and From Anything) in a certain sense 'belongs' to the source fragment. For example transition from "Look Around Using Binoculars" to anything might stow the binoculars and go back to a normal idling pose. To the game code it might be useful to treat the stowing of the binoculars as part of the action that is "using binoculars" instead of as a part of the next action. If programmers ask for this, you will have to mark these kinds of transitions as "Outro". This won't change the behavior in the editor, but it will change the behavior of game code.

Outro transitions will be in a sense appended to the previous fragment. When they play the previous action will not be exited but IAction::OnTransitionOutStarted() will be called. Also, IAction::IsTransitioningOut() will return true while the Outro Transition is playing.