The Character Tool can trigger Animation Events for Footsteps and Foley which allows the sound to alter on the basis of the character or surface-type while using the same animation.
The article Audio & Character Tool is prerequisite knowledge for the following tutorial.

By making use of the Animation Events in CharacterTools you can achieve:

Setting up the Footsteps FXLibs

To enable character based Foleys and Footsteps requires "CharacterSounds" entries inside the Entity Lua script.

The following example is taken from the player.lua which can be found under <Game folder>\GameSDK\Assets and in this *.pak,
in Scripts\Entities\actor\.

The corresponding effect (depending on the material) defines the actual audio system Trigger to play. This is done in the Effect Library stored under
<Game folder>\Assets\gamedata.pak and within this *.pak file, in Libs\MaterialEffects\FXLibs. 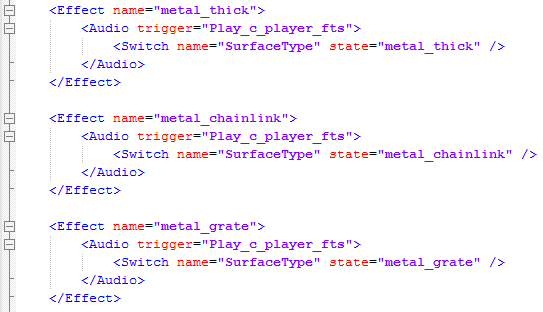 In this case of the audio system Trigger "Play_c_player_fts" is being played for each material, but with a set audio system Switch that is based on the SurfaceType - this changes the sound accordingly.

Setting up Footsteps in Character Tool

For correct timing the "footstep" entry is now required on each animation. This is achieved in the Character Tool and stored in the animevents file.

By double-clicking on the Timeline it is possible to create a new Animation Event that will be triggered when the animation hits the specific point. 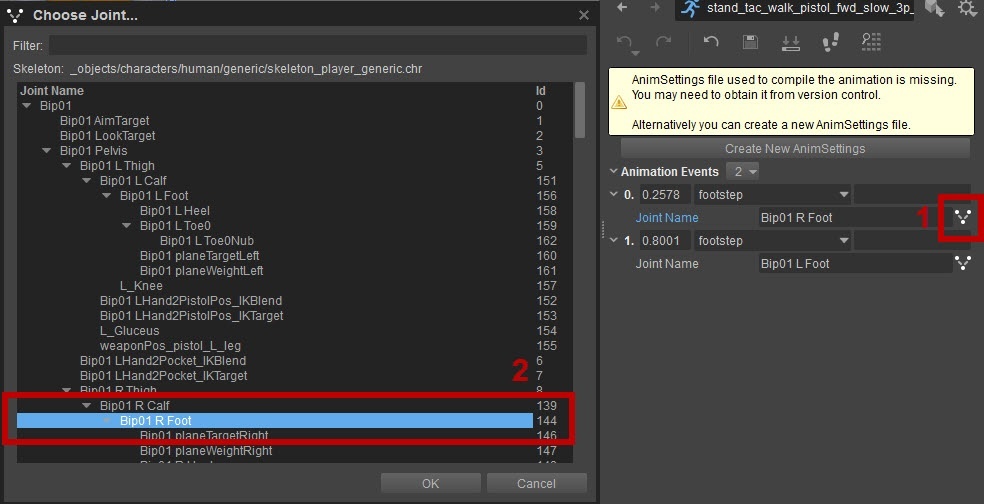 For Footsteps it is particularly important to map any bones correctly. This is because particles can also be triggered via the FXLibs.

Footsteps take the character_speed audio system Parameter into account. This parameter offers modification of sound depending on for example the game-world speed of the entity.

Setting up Foleys in Character Tool

Character-based Foleys do not need to be run through the MaterialEffects.xml table because they are not dependent on the material. However, they require an Effect Library specifying the audio system triggers for the different Foley actions inside the foley_player XML under <Game folder>\Assets\gamedata.pak and within this *.pak file, in Libs\MaterialEffects\FXLibs. 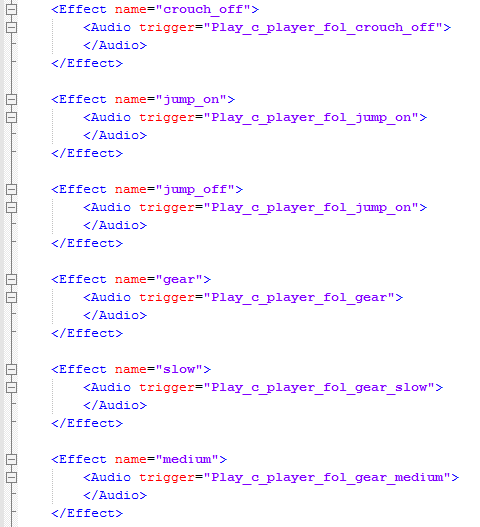 In order to access the specified FXLib we select foley from the dropdown menu of the created Animation Event.

In the screenshot example below, the field on the far right is used to define which Foley action (crouch_off) should be played.

Using the Foley FXLibs can be useful if/when you are using multiple characters, as it allows the sound to be altered on the basis of the character and while using the same animation.