CRYENGINE allows the usage of Merged Meshes for patches of vegetation. By default the Merged Mesh feature is disabled - this avoids unnecessary calculations when the feature is not required. In order for Merged Meshes to be calculated and therefore used with sound, the relevant CVar must be set in the system.cfg file. To do this set the CVar g_enableMergedMeshRuntimeAreas=1.

You can find more details about Using Console and Config Files by following the link.

The Merged Mesh vegetation feature uses the Surface Type of the vegetation in question.

When entering a Merged Mesh vegetation patch the system looks up the Surface Type in an *.xml file named MergedMeshSurfaceTypes.xml. This *.xml file is located in: <Game folder>\Assets\gamedata.pak. Within this *.pak file, the MaterialEffects.xml file can be found in Libs\MaterialEffects.

Once you enter a Merged Mesh vegetation patch, and based on its assigned Surface Type, the audio system Trigger defined in the MergedMeshSurfaceTypes.xml file will be executed and the audio system RTPC updated according to the density of the vegetation: 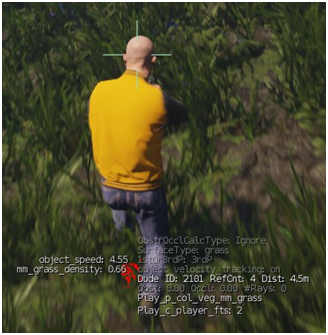 In the example above, which is taken from the MergedMeshSurfaceTypes.xml, we have specified the audio system Trigger Play_p_veg_mm_grass that will be executed when entering a patch of vegetation with the SurfaceType mat_grass. The audio system RTPC mm_grass_density is updated according to the density of the vegetation in question.

As soon as you enter the patch of vegetation the setup in your audio middleware should trigger a looping sound. Volume and other parameters can be altered, but this will depend on the connected Audio Middleware Controls, the mm_grass_density audio system RTPC and the object_speed audio system RTPC.