CRYENGINE's SDL Mixer-based audio implementation provides a simple interface to import audio files in different languages through the use of its Audio Controls Editor and command line editor, Console.

While the ACE allows localized sound files to be imported from disk into a project's audio assets directory, the CVar g_languageAudio helps specify the language a localized audio file corresponds to when imported into a project.

The CVar's default value is English, and it can accept any user-defined value corresponding to the language of localization, i.e., German, French, Finnish or such.

In the Audio Controls Editor, clicking the Import Files button at the top of the Middleware Data panel opens the Import Audio Files window, allowing users to locate and import audio files from disk. 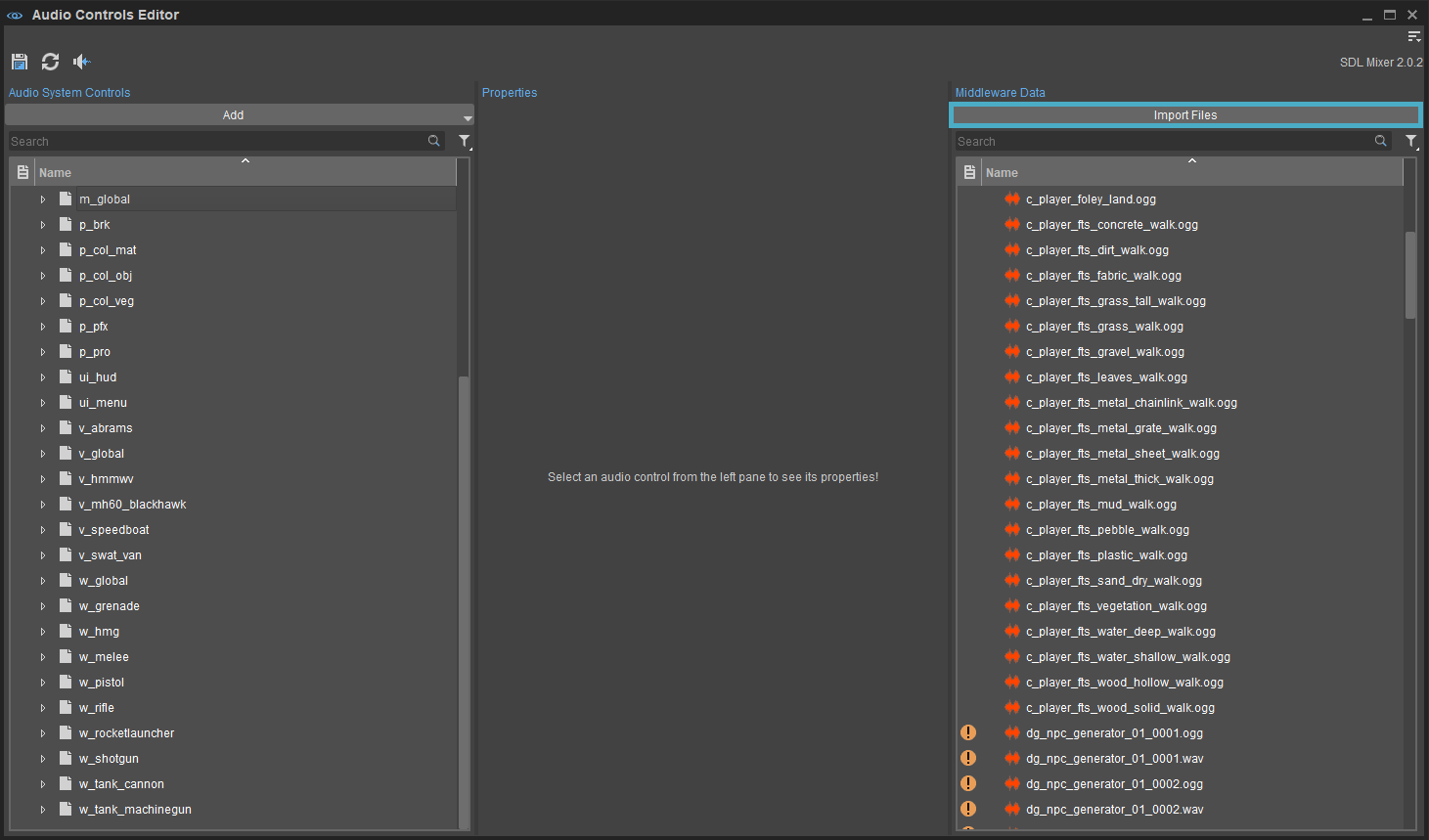 Selecting the desired audio files from disk subsequently opens the Audio File Importer window, with the option to specify if the imported files are localized or not.

Check the Localized box besides the Target Folder field if the imported audio file is localized/available in other languages.

Based on the language setting specified by the g_languageAudio CVar, the Audio File Importer attempts to save the imported file in the localization directory of a project, under a folder of the same name as the CVar's value.

For example since the value of g_languageAudio has been set to German, the Audio File Importer attempts to save the imported .wav file under localization/German/audio/sdlmixer/assets within the project directory in the above image.

If a folder corresponding to the language value of the g_languageAudio CVar doesn't exist, a new one will be created by the Audio File Importer.

In any case. the save destination of the imported audio files can be changed, or a new folder created by clicking the icon beside the Target Folder field. The

icon beside a folder's listing in the Middleware Data panel indicates that it contains localized files.

The imported file can then be linked to a new or previously created audio trigger through the Audio System Controls and Properties panels.

Once imported, an audio file can be linked to a previously created Audio Trigger in the Audio System Controls panel.

To connect an imported audio file to a previously created Audio Trigger, select the Trigger in the Audio System Controls panel, and then drag/drop the audio file from the Middleware Data panel into the Connections section of the Properties panel. 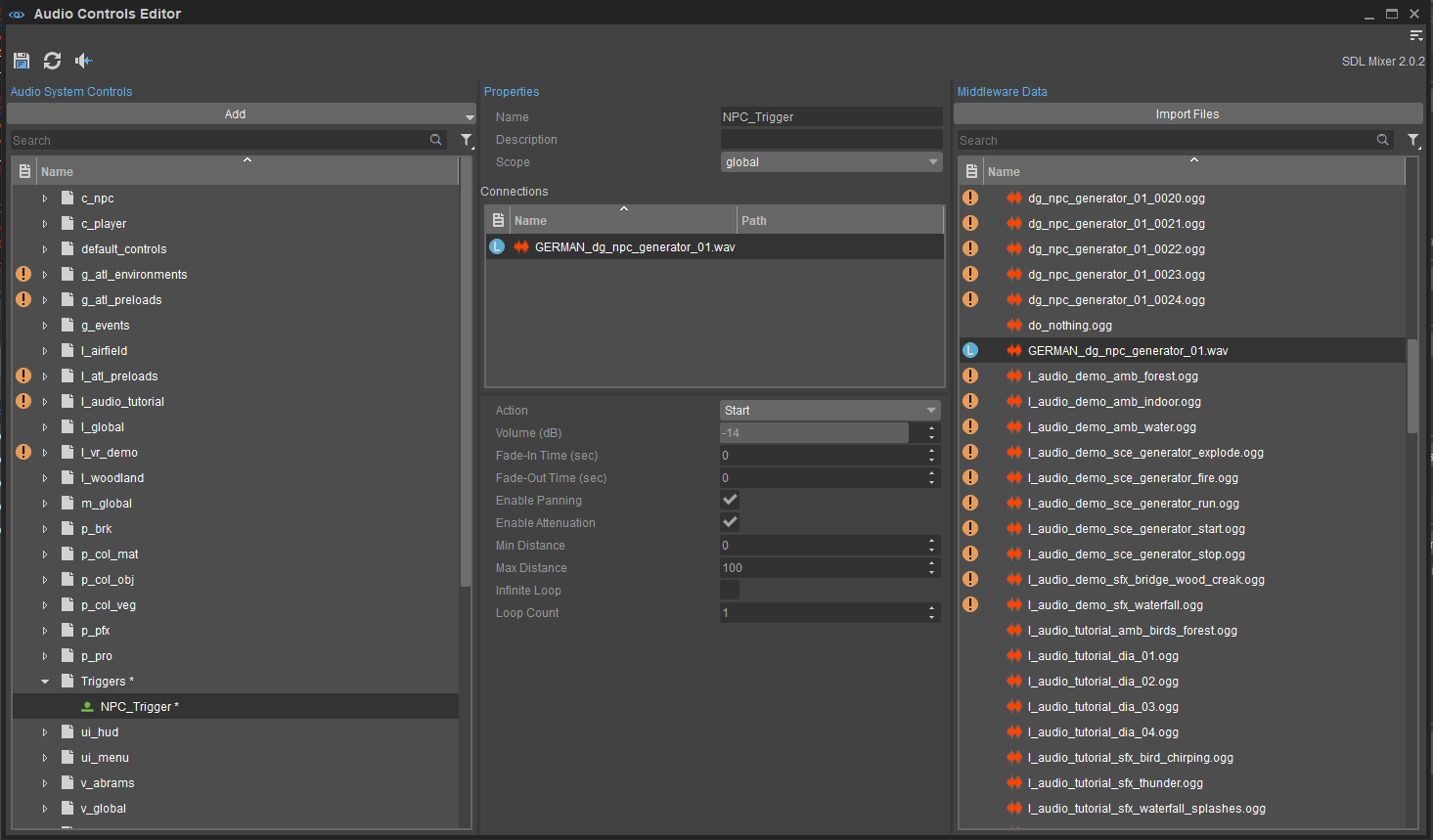 Once an audio file has been imported, its alternate language versions can be imported by changing the value of g_languageAudio.

In the case of the example provided in the previous section, changing the value of g_languageAudio from German to English will cause the Import Audio Files window to attempt saving all subsequently imported files under localization/English/audio/sdlmixer/assets within the project directory when the Localized box is checked.

Consequently, previously imported versions of the localized audio file in languages other than English will no longer be visible under the Middleware Data panel.

If the language of the audio file linked to a trigger doesn't correspond to the language value specified by g_languageAudio, a

icon beside the file's listing under the Connections section of the Properties panel will indicate that the linked audio file is no longer available. 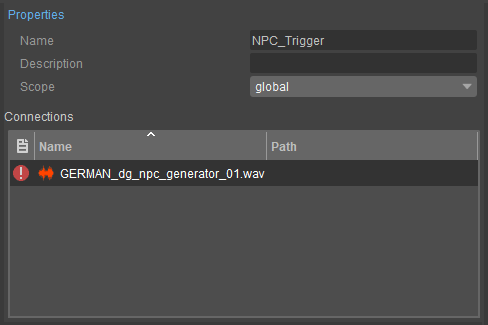 Once imported, these alternate language versions of the same audio file can also be linked to triggers in the Audio Systems Control panel as explained above.

When multiple language versions of the same audio file are connected to the same trigger, users can switch between the different languages within the Viewport by simply changing the value of the g_languageAudio CVar from the Console.

When this NPC_Trigger is associated with an Audio Area Ambience or Audio Area Random audio entity that might be attached to an an Area Shape in the Viewport, users can specify which language of the dg_npc_generator_01.wav audio file plays when a player walks into the Area Shape by changing the value of g_languageAudio.

Setting g_languageAudio to German via the Console, for instance, will cause only the German_dg_npc_generator_01.wav file to be triggered within the defined Area Shape.