In your project folder there will be a file of type Cryengine project - the filename extension for these types of file is *.cryproject

When you right-click (as seen below) on such a file you get a number of options where you can easily perform various actions regarding your project. 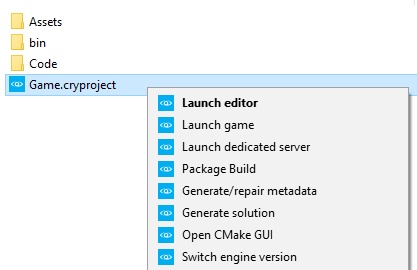 The available options do the following.

To add a console command to the project, it has to be added to the console_commands list. For example the GameLauncher can be forced to load a map on startup by adding the map command.

Console variables are added in the console_variables list. For example the displayinfo can be set by using the r_displayinfo variable.

Always make a backup before you modify it by hand. The Engine is only able to read the file if it contains a valid JSON. If the JSON is not valid the project cannot be started until it has been fixed.

Missing or incorrect options when right-clicking the *.cryproject file

Unable to generate the solution for the GameSDK

The GameLauncher is only showing a black screen

Another cause of the black screen can be that no map is being loaded. You can use the map command in the console to make sure your game loads the right