Geometry Caches in CRYENGINE allow the storing and playback of arbitrary animated geometry (similar to a video).

Some use-cases are: complex destruction animations, complicated cloth motion or special effects that cannot be achieved with CRYENGINE's particle system.

The *.cax file is to GeomCaches what a *.dds file is to Textures. It gets generated based on your Engine version from your *.abc and *.cbc.
The format is subject to change with future Engine updates and is not backwards-compatible!
Keep your *.abc and *.cbc just like you would keep your *.tif files.
See the Batch Conversion section for information on how to update all *.cax files at the same time. 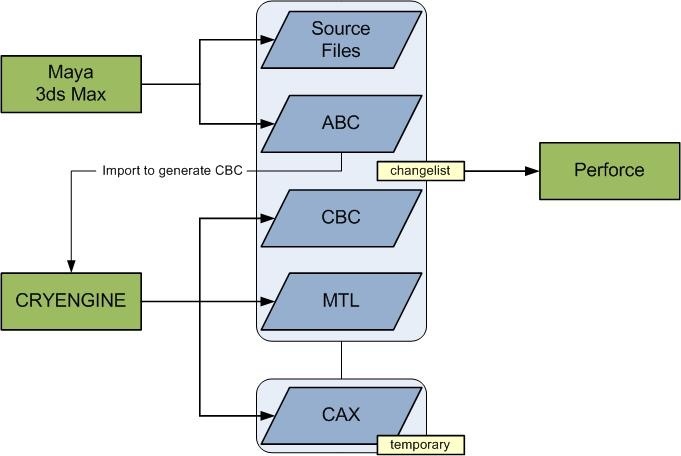 Alembic is a very flexible format that is designed to be extensible for almost any conceivable custom pipeline.

As such, many 3D applications export Alembic slightly differently, this makes it tricky to import caches from different sources.

For this reason, some guidelines need to be followed when creating Alembic caches for GeomCaches:

CRYENGINE requires per-face material assignment so that it can set sub-materials to geometry.

So, generally it is good practice to name your materials like this:

You can create animated or passive physics proxies by including one of the strings in the name of the mesh... see the following list. The surface-type is derived from the assigned material. Note: Physics proxies will not be rendered.

Make sure that you have installed the Maya Alembic export plugin: from Maya's Main Menu bar ->  Windows -> Settings/Preferences -> Plug-In Manager, tick the "Loaded" and "Auto-load" checkbox for the "AbcExport.mll". 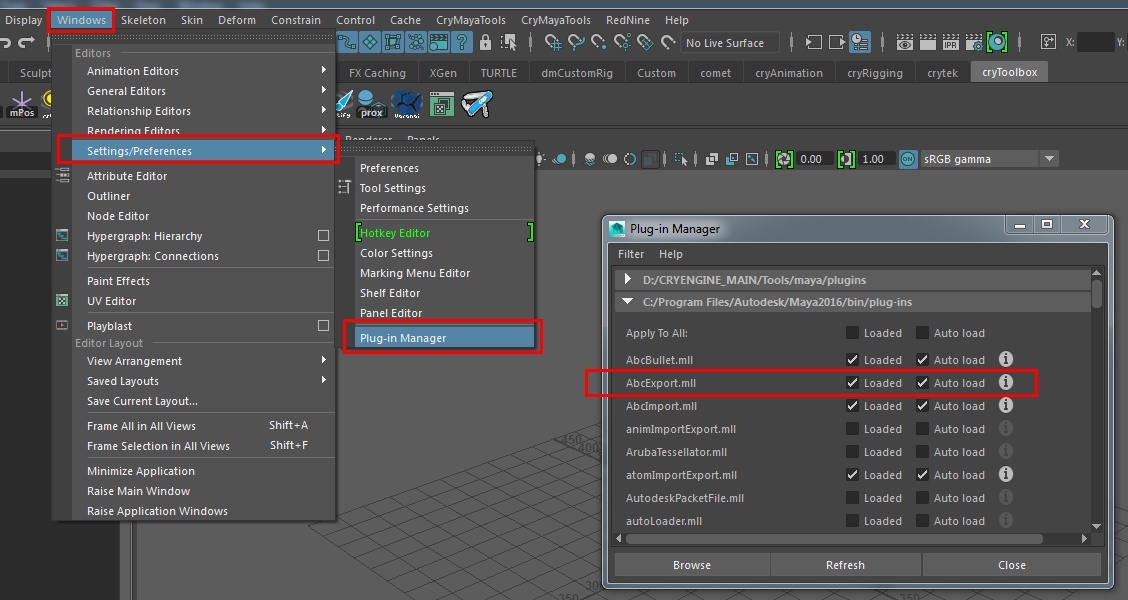 1. Run the AbcMat script (inside the Crytek Shelf) to prepare your scene for export. This script slightly modifies your scene to work around some limitations in Maya's Alembic exporter.

3. Under the advanced Options, (scroll to the bottom) and make sure to have the essential flags enabled - as in the picture below. 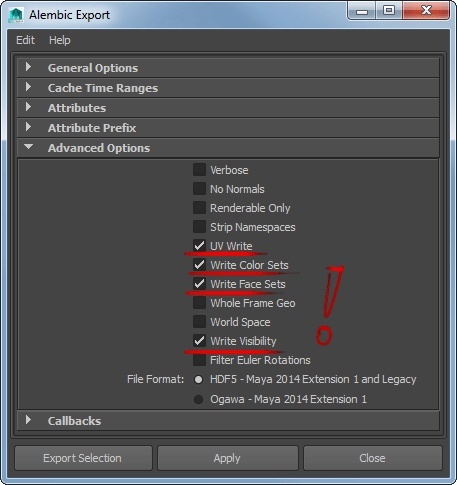 After you have set the options in step 3. Do not use the "Alembic Export" Options window -> "Export Selection" (or "Export All" ) buttons at the bottom! Otherwise you will loose the material IDs you have set and end up with just ONE material ID for your Alembic asset.

Once you have set these flags, click the close button and go to the Crytek Exporter!

4. Just select the mesh nodes that you wish to export and click the "CryAbc" shelf button. A file dialog will pop up and ask you to set the file location and file name for the Alembic file.

Beginning with version 2016, 3ds Max officially features an Alembic exporter. However, it will not export deforming meshes that are readable for CRYENGINE, rather only "rigid bodies" with animated transforms. Therefore, if you want deforming meshes, for e.g. cloth objects, blendshape animations, etc..., then you must export to an Alembic file from 3ds Max 2016. To do this, re-import the *.abc file into Maya. Then set the materials as per the Maya Alembic (according to the CRYENGINE workflow) and get the scene exported with CryAbc using the Alembic exporter that is available from the crytek shelf. (Follow the guide section above)

This can be useful for automatic asset builds or manually updating all *.cax files after installing a new Engine version.

Here's an example for using the resource compiler via the command line to convert all *.abc files in the SDK:

The import process is straight forward:

Drag&drop your alembic (.abc) file into the Asset Browser to create a Geometry Cache asset.

The asset will be imported with default settings, which can be changed later in the relevant Asset Editor. 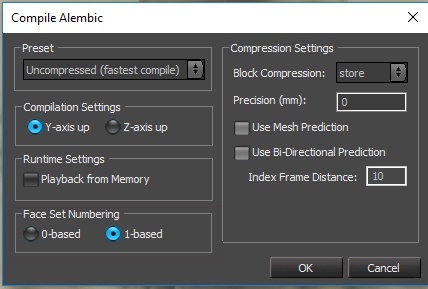 These settings do the following:

The entity itself can be used, similar to an AnimObject in Trackview and Flow Graph.

With the appropriate settings, the entity can be used as a looping animated prop without extra game logic.

Here's an example of an independent GeomCache prop from Ryse that loads and unloads as the player moves closer to or further away from:

Since complex GeomCaches are too large to be fully pre-loaded, their animation data is streamed a few seconds before being played.

Smaller GeomCaches can be completely loaded into memory by enabling the "playback from memory" flag on import.

For pre-recorded trailers with many complex GeomCaches it may be necessary to increase the "e_GeomCacheBufferSize" and "e_GeomCacheMaxPlaybackFromMemorySize".
Note, that this will also negatively affect loading-times.

Some techniques to help GeomCaches perform well are:

The overall memory consumption and streaming performance of all active GeomCaches can be profiled using "e_GeomCacheDebug 1". 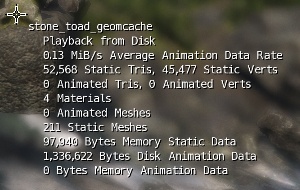 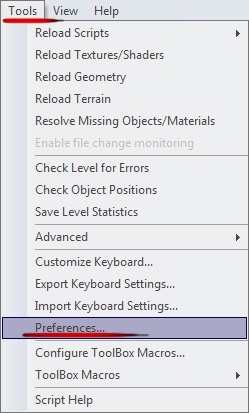 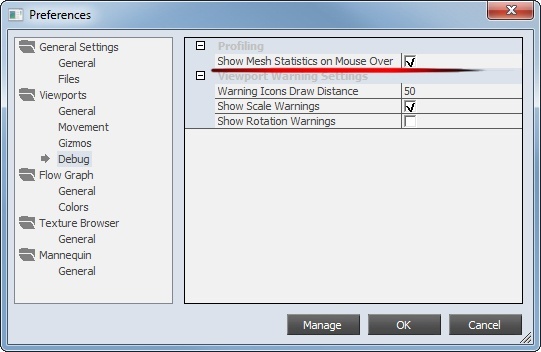 e_GeomCacheDebug - displays GeomCache streaming debug information. Avoid having a full streaming buffer, since it will lead to animation stalls: