An UI element represents and defines a Flash asset (.swf file), that is usable by the engine. All UI Elements are defined as an XML script file located in GameSDK/Libs/UI/UIElements. The XML file contains all the information, which the engine needs in order to use the Flash asset in game.

So imagine we have a HudElements Flash asset and we want to use it in the engine. You have to create a HudElements.xml file and save it in GameSDK/Libs/UI/UIElements as previously mentioned.

The XML script contains blocks for functions, events, variables, arrays, and movie clips. These blocks are used by the engine to create Flowgraph nodes automatically. The nodes can be used than in UI Actions or Flowgraph to script UI logic.

Functions that should be callable from outside ( UI Actions / Flowgraph ) need to be defined in the <functions> block of the element.

e.g. an actionscript function to set a health bar:

This can be defined in the xml as:

The system will automatically create a node for the Flowgraph, with which we can call this function.

To get notification about some user interaction, e.g. if a button was pressed, events can be defined in the <events> block. To trigger an event in your actionscript code you have to call fscommand("commandString"). These fscommands are handled by the engine.

e.g. in the onPress function of a button you can call fscommand with the string "onMyButtonPressed" and some arguments.

To handle this event add a <event> tag into the <events> list:

The system creates a node to handle this event:

Access to an array or a variable can also be defined in the xml file.

To get or set a variable select the variable in the dropdown list of the UI:Variable:Var or UI:Variable:Array flownode.

You can also access your defined MovieClips via FlowNodes.

To show or hide a UI element use the UI:Display:Display node. You can select the element in the drop-down list. If the element is not in the list, this means there is something wrong with the XML script file defining the Flash asset. 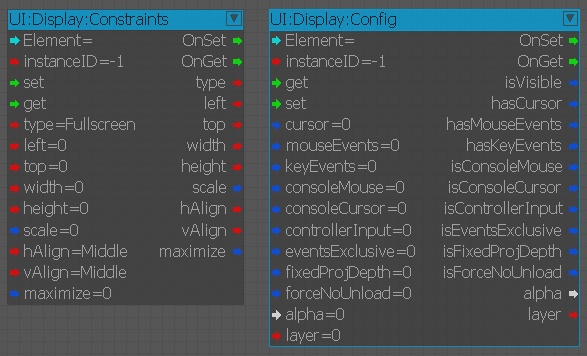 It is also possible to initialize all of those settings in the XML file. Keep in mind that, by doing this all of your UI Elements of this type will share the same configuration / constrains (it is still possible to customize it on per instance basis).

There are three modes ("type") to place the asset on the screen:

If you use "-1" as the instance ID, the node will affect all instances of this UI element, which are currently available (if there are none, it will create one).

If you use "-2" as the instance ID, it will trigger the node functionality on all initialized instances of this UI element.

Functions Reserved and Used by the Engine

There are some special actionscript functions that are automatically called by the UI system, when certain conditions are fulfilled.

These functions have to be defined in the rootspace of your actionscript and don't need to be specified in the UI Element XML file.