Below is a collection of tips and tricks to help remedy common issues faced when downloading/installing the CRYENGINE Launcher.

For issues not covered in the sections below, please reach out to the CRYENGINE team through its Answers, Forums or Support channels with a complete description of the problems faced.

Also delete the following folders from the HDD.

Please re-install the CRYENGINE Launcher and the desired CRYENGINE versions once the above steps have been performed.

Launcher Fails to Install/Uninstall or Open

It's a known issue that if the Launcher is installed on an external removable drive for e.g. a pen-drive or a network drive then install/uninstall or failure to open can occur. Equally the same may also cause CRYENGINE installation fails. Hence, we recommend that both the CE Launcher and CRYENGINE are installed on an internal drive.

Sometimes when updating the Launcher (from the Launcher itself), it downloads, closes and reopens, however the update has failed and the ‘old’ version of the Launcher remains open.

This issue could be caused by something that is blocking the CE Launcher folder from correctly swapping out with the new updated folder.

This should resolve the issue, the update now being effective in which case you can delete the live.old folder.

If the Launcher fails to update when the Sandbox is open, please close it before attempting to update it again.

Sometimes after a period of Launcher inactivity the tabs (My Assets, My Engines etc.) can stop working. The Launcher uses the Windows Temp folder, hence if that particular folder is for e.g. cleaned-up, then failures are very likely to occur. Some typical examples of Temp folder interventions could include;

The recommended solution to overcome this issue is close the Launcher from the System Tray and then reopen the Launcher in the normal way.

If CRYENGINE fails to install despite AV software being white-listed,

This is often because some DLLs (ssleay32.dll and libeay32.dll, for instance) that are packaged with the Engine might already be in use by another application/package, and are therefore installed somewhere in a Windows folder.

libcore.dll and libcurl.dll are two other DLLs known to cause conflicts. 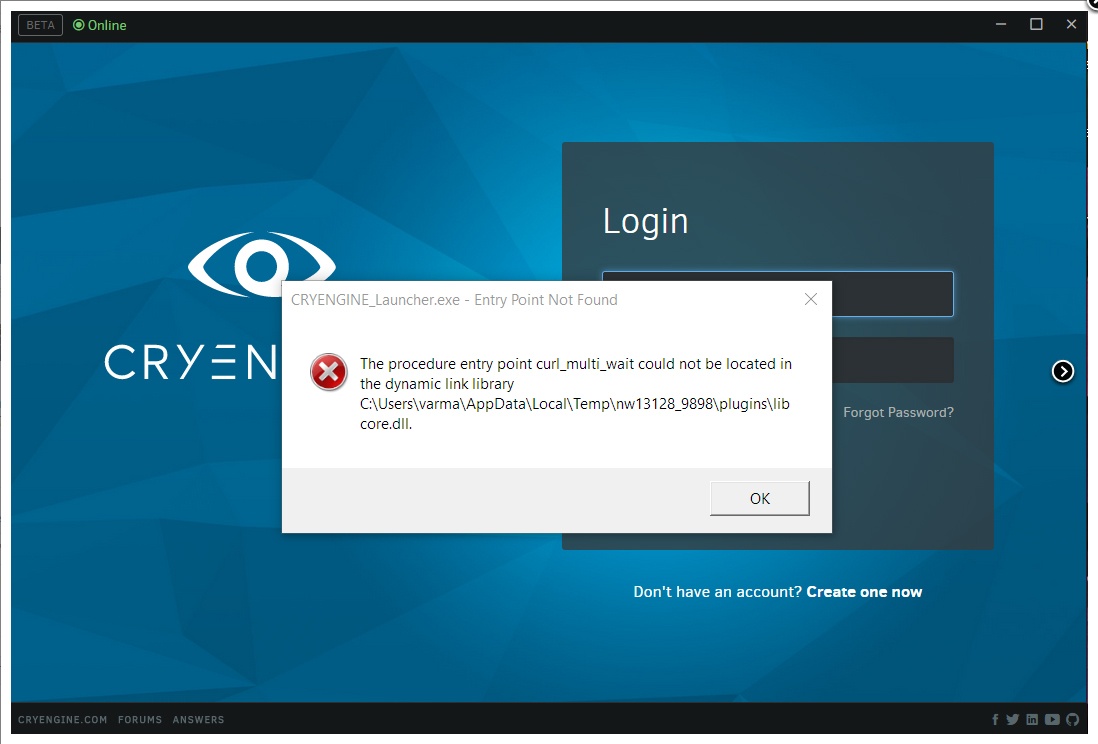 To overcome this, the offending DLLs need to either be removed or moved to the root folder of the application/package that is using them.

If a new version of CRYENGINE is available, but not visible in the Launcher, please log-out of the launcher and attempt to log-in again.

This should clear the cache and expose the new Engine version to the Launcher.

If the Sandbox Editor fails to launch due to the following:

updating to the latest available Launcher version should resolve the issue. If not, please try the following:

Unable to Validate a Project

When using Engine versions 5.3 and/or 5.4, an issue might occur preventing projects from being validated.

To resolve the issue, please try the following:

If the problem is not resolved by the above, then running the project manually via the command line is an option. To do that.

In some cases, if a preview version of the Engine has been registered, unnecessary entries can be present in the %ALLUSERSPROFILE%CrytekCRYENGINE/cryengine.json file.

The solution to this is to: